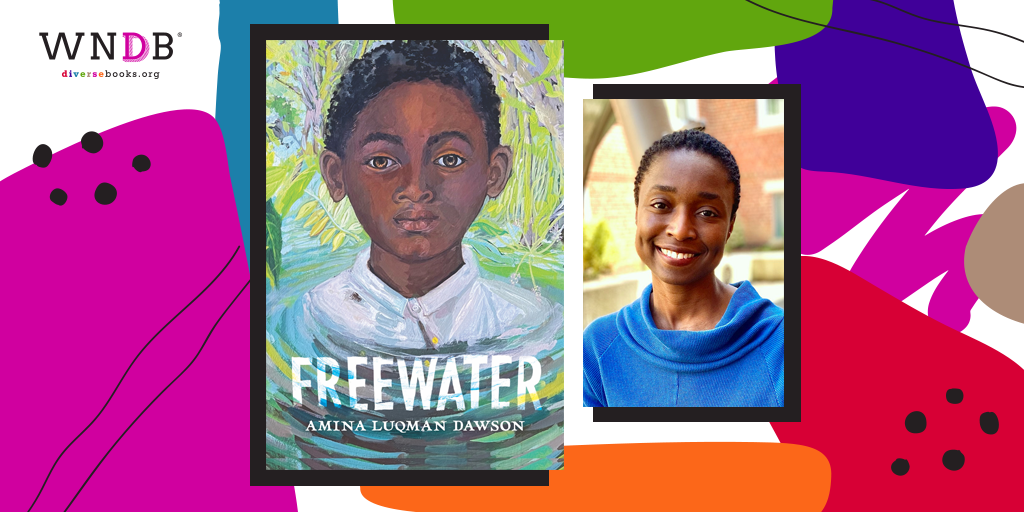 Under the cover of night, twelve-year-old Homer flees Southerland Plantation with his little sister Ada, unwillingly leaving their beloved mother behind. Much as he adores her and fears for her life, Homer knows there’s no turning back, not with the overseer on their trail. Through tangled vines, secret doorways, and over a sky bridge, the two find a secret community called Freewater, deep in the swamp.

In this society created by formerly enslaved people and some freeborn children, Homer finds new friends, almost forgetting where he came from. But when he learns of a threat that could destroy Freewater, he crafts a plan to find his mother and help his new home.

Deeply inspiring and loosely based on the history of maroon communities in the South, this is a striking tale of survival, adventure, friendship, and courage. 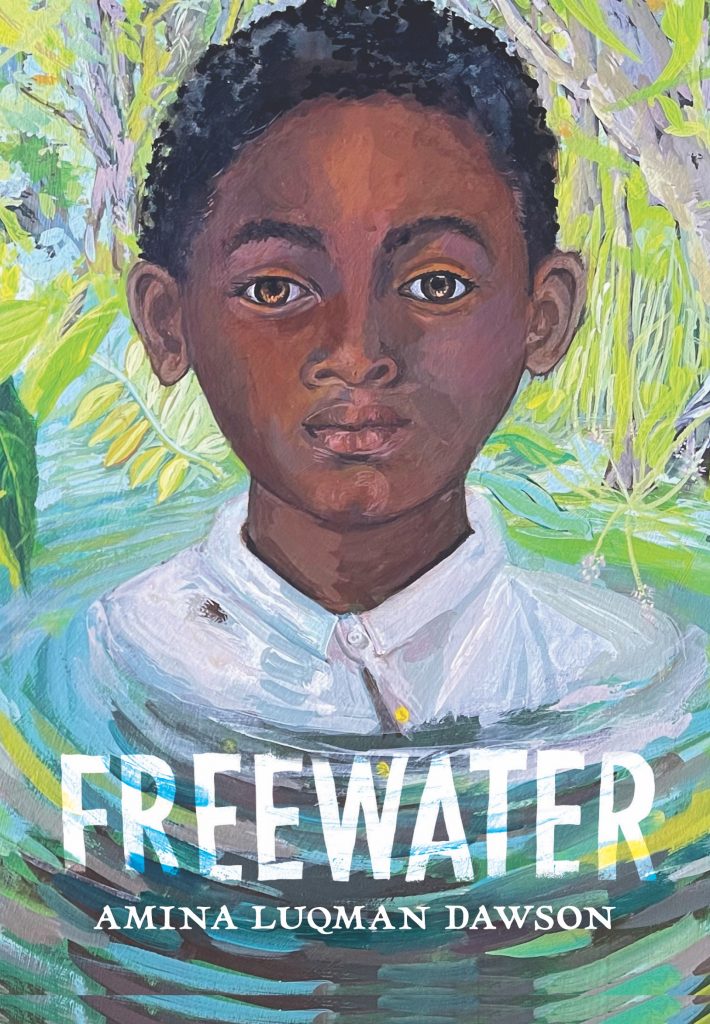 When I first read the blurb of Freewater, it reminded me of The Deep by Rivers Solomon—a story rooted in history. What inspired you to write Freewater?

I can see why you made that Freewater connection—a secret society of formerly enslaved people. I haven’t read The Deep, but now I must!

How could I not be inspired by formerly enslaved people managing to create secret free lives while surrounded by danger? What courage, determination, and ingenuity did it take to survive clandestinely in a wilderness so difficult and inhospitable that even your pursuers didn’t want to venture in after you? That history flies in the face of the continually fearful, victimized, and hopeless enslaved person historically portrayed.

To be clear, that same courage, determination, and ingenuity existed within enslaved men, women, and children on plantations. Yet, the secret and mysterious nature of maroons made it a hotbed for storytelling adventure. What better way to capture the imagination of children and their parents? Maroons simply haven’t been discussed much in literature. This felt like new ground when discussing the enslavement of African Americans. I think we all could use some new ground on this very old, hard topic. Who knows what new conversations could be had and ideas sparked by mining this bit of history?

What made you decide to tell the story of slavery, resistance, and rebellion for an age-appropriate reading level?

Adults in US society find the nation’s slave history difficult to confront. It conjures up all sorts of feelings of fear, pain, shame, awkwardness, and more. A future where we have fuller, more healing, and just conversations about slavery means we must plant new and healthier feelings about it in our children.

I offered myself a challenge—use storytelling about enslaved Black people in a way that would leave a child reader with feelings of connection, hope, positivity, and exuberance that would last a lifetime. The key was maroons, where formerly enslaved people escaped and lived deep undercover in the nation’s swamps and forests. They were the very definition of resistance. In creating Freewater, I could center the voices of enslaved Black folks over their victimization within the system of slavery. Freewater does have elements of pain and suffering; however, they aren’t centered.

How did you decide which elements to keep, redefine, and how to portray history?

Freewater is based on a very simple and logical truth: Many enslaved people did not have the means nor proximity to escape to northern states, Canada, or Mexico, yet that didn’t stop their desire and effort for liberation. Instead, some sought refuge and freedom in the nearby US wilderness. Makes sense, right? Many were quickly caught, but some individuals, small enclaves, and even settlements/communities managed to experience freedom for months or even years. Over 1,500-miles of the Great Dismal Swamp is where many maroons were known to have lived for years. I built Freewater on that truth.

From there, I let my imagination run, with sky bridges, Big Tree and Remembering Day, etc. These are all things that allow a reader to dream big. The fun part was sprinkling in bits of knowledge I learned about the Great Dismal, along with things I learned about maroon enclaves in other states like Louisiana and South Carolina. I also pulled from the well-documented, robust history of maroons in other countries in the Americas, such as Jamaica and Brazil. For example, I read about the use of patrols in a maroon community on the border of South Carolina and Georgia, and I got the idea of using leaves and vines for camouflage from maroons in Jamaica.

In what ways was writing Freewater challenging for you? Was it also a rewarding experience?

Yes, it was quite challenging—but it was one of the most rewarding experiences of my life.

Early on in writing and researching for Freewater, my husband and I were on a road trip and saw signs for a plantation, so we decided to stop. It was a hot summer day, and I remember as we drove through the cotton fields that led to the main house the air became stifling. As we walked the grounds I could barely breathe. When it came time to enter the “Big House” for a tour, I couldn’t, and my husband and I left. I was frightened and angry at myself, and at the world that created this place.

Two years later, after I’d written my first major draft of Freewater, I knew I needed to return to plantations to learn. This time my visit was quite different. I’d written characters that I knew and loved; characters who had both contributed to plantation life, survived it, and in some ways defeated it. Those characters came along with me. As I walked the grounds, I envisioned Suleman perched in the trees, and Rose in the kitchen with Homer peeking through the window. My heart swelled. I had Sanzi on one shoulder and Ferdinand on the other. Through the process of creating Freewater, I’d grown in ways that are hard to describe; but, I do know that I want to pass this experience on to children. 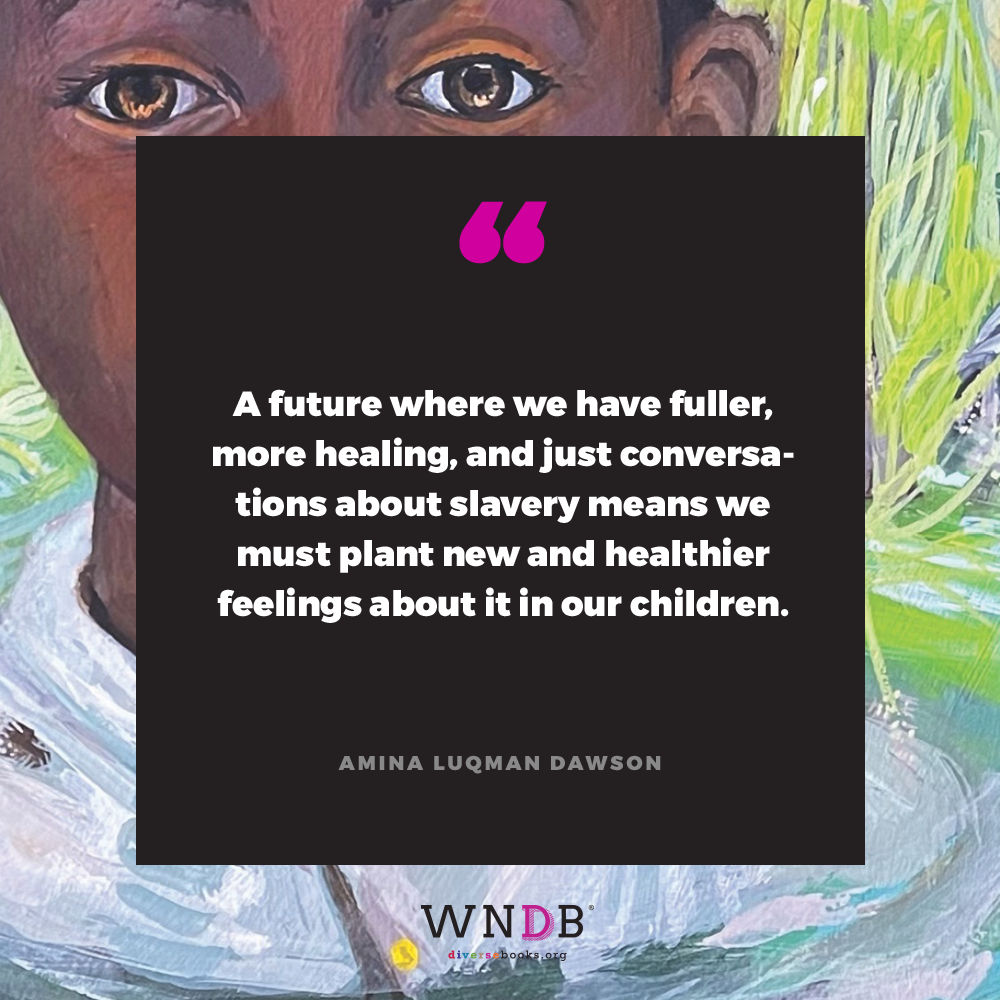 Throughout the book, the main character Homer and his sister Ada encounter a number of people: those who once lived through and escaped slavery, as well as new friends who’ve only known life in Freewater. Why was it important for you to show contrasting experiences that shape the characters we meet in the story?

I always say that humanity resides in the gray areas. I’m sure someone quite famous said that first! But I think it’s so appropriate in our understanding of the complexities of enslaved people, particularly children. Who they were was as varied as each person who exists in this nation today. I think when we see the extraordinary hardship of enslavement it can be easy to miss the nuances, intricate personalities, and experiences of each person who went through it. It’s hard to see beyond the pain and injustice. Knowing and understanding the children’s personalities in Freewater—each with their own quirks, blind spots, and strengths—creates a symphony of voices. It’s both fun and important to have contrasting personalities with their own experiences. It’s through the music of their voices that the reader hears the sound of humanity.

What message do you want young readers to take away from your book?

I want kids to walk away feeling totally inspired and thrilled by the strength, ingenuity, and humanity of this nation’s enslaved people. I want them to feel unencumbered by the awkwardness, pain, and fear that past generations have carried on the subject of slavery and instead feel a zing of hope and excitement when they even hear the name “Freewater”.

What books are you reading right now?

Ironically, while writing Freewater, I avoided historical fiction. I didn’t want to have those voices and characters in my head. Now that I’m finished, it’s fun to return to the genre. I’m reading The Confessions of Frannie Langton by Sara Collins. It’s set in early 1800s London and is about a black woman on trial for the murder of her employers. It’s quite a thriller, wrapped in some great history—both things I love!

What helped you get through this long writing process?

I am grateful that WNDB played a crucial part in making the completion and publication of this book a reality. During the writing process, I was unsure if I’d ever complete Freewater. Then, I attended the Walter Awards in a spur of the moment, and thank goodness I did—it changed my life. That night, I met another budding author who became one of my closest writer friends, and I was inspired by amazing authors on the program, like Jacqueline Woodson, Jason Reynolds, and more. I wanted to be a part of the writing community, and my goals were renewed. I worked hard, didn’t give up, and began another draft of Freewater.

I also applied and was awarded a mentee position as part of the WNDB Mentorship Program. My mentor, Kathi Appelt, treated me as a fellow author. She has offered me sage advice that improved my manuscript and helped me gain confidence as a writer. She never told me what to write, but through our invaluable chats, she gave me numerous insights and encouraged me to keep at my craft. I had the most productive writing year of my life! By the end, I was ready to pitch my manuscript to agents, some of whom Kathi had introduced me to. That’s how I landed my fabulous agent, who also led me to my current wonderful publisher.

WNDB planted the seeds of my Freewater journey and led to invaluable friendships with supportive professionals. And for that, I am forever grateful.

Amina Luqman Dawson is the author of the pictorial history book Images of America: African Americans of Petersburg (Arcadia Publishing). Her op-eds on race and popular culture have appeared in The Washington Post, The San Francisco Chronicle, and more. She’s a proud mother of a 12-year-old son. Amina, her husband, and her son reside in Arlington, VA. You can find her online at aminaluqman-dawson.com.

Khadejah Khan is a blog volunteer for We Need Diverse Books. Like Grandpa Joe, she lives in pajama co-ords and never leaves her bed, where she is wrapped burrito-style in her blankets. She has an insatiable sweet tooth, as well as a voracious appetite for fiction, children’s stories, and historical non-fiction. In her free time, she’s quoting SpongeBob, rewatching MCU movies and reruns of The Dick Van Dyke Show, roller-skating, or tanning like a rotisserie chicken poolside in Florida. She is currently an Editorial Assistant at Luxe Interiors + Design. You can find her on Twitter @khadejah_k.

Previous Post: « Cover Reveal for A Life of Service: The Story of Senator Tammy Duckworth by Christina Soontornvat, Illustrated by Dow Phumiruk
Next Post: Cover Reveal & Exclusive Excerpt for Until We Break by Matthew Dawkins »
Save the date for the #WalterAwards23! You can now