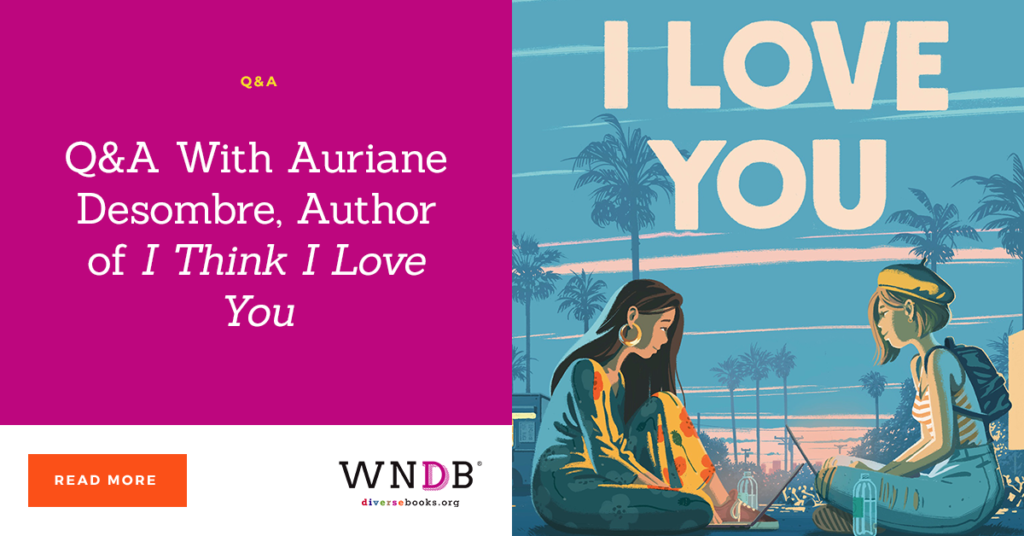 Today we’re pleased to welcome Auriane Desombre to the WNDB blog to discuss her young adult novel I Think I Love You, out March 2, 2021!

A YA contemporary rom com about two girls who start as rivals but after a twist of events, end up falling for one another–at least they think so. A pitch perfect queer romance–and it’s a paperback original!

Arch-nemeses Emma, a die-hard romantic, and more-practical minded Sophia find themselves competing against one another for a coveted first-prize trip to a film festival in Los Angeles . . . what happens if their rivalry turns into a romance? For fans of Becky Albertalli’s Leah on the Offbeat, full of laugh-out-loud humor and make-your-heart-melt moments. 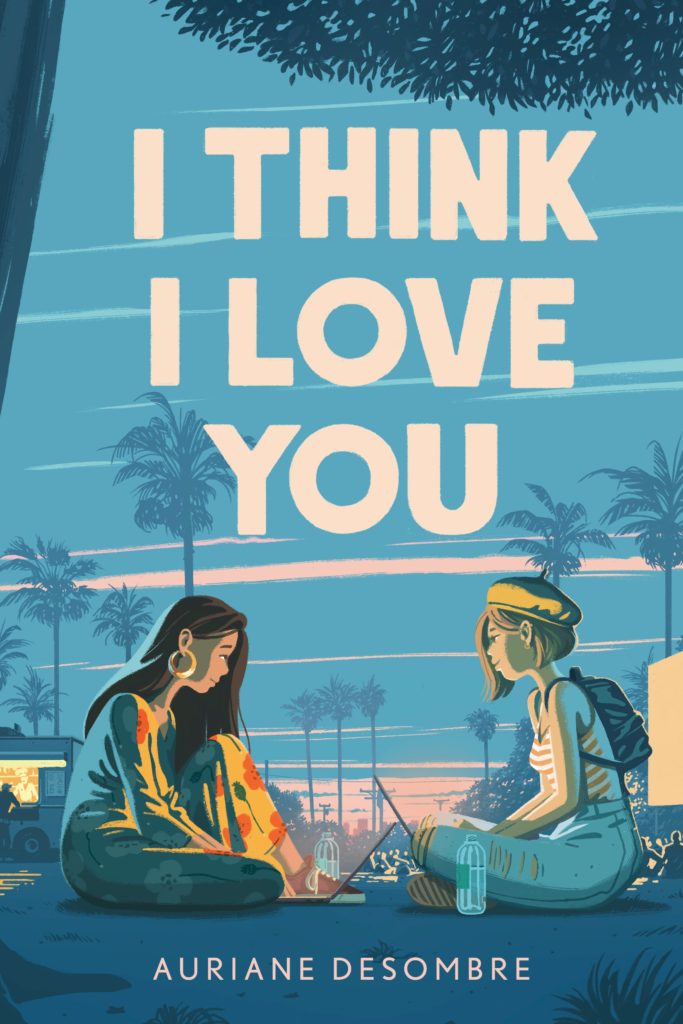 Much Ado About Nothing was a major inspiration and influence on this story. What came first, the idea to write a retelling of Much Ado or the characters and plot of I Think I Love You?

The idea for an adaptation of Much Ado definitely came first! I love the rivals-to-lovers trope to a probably unhealthy extent, so that play is one of my absolute favorites. I was really excited about the idea of adapting all that wonderful banter into a modern context, and extra excited about adapting it as a queer relationship. From there, it took on more of a life of its own with every draft as I got to know these characters, their backstories, and their motivations.

I think the most important difference between Much Ado and I Think I Love You is Emma’s character—she’s much more of a romantic and champion for love than her Much Ado counterpart, Beatrice. Sophia stayed just as anti-relationship and cynical as Benedick from Much Ado. Because of their different views on romance, they clash on everything from Emma’s matchmaking plans for her friends to their short film competition.

How did you adapt MUCH ADO for a contemporary LGBTQ+ YA rom-com audience?

My favorite parts of Much Ado are the rivals-to-lovers banter and the matchmaking chaos, so those were the elements I wanted to translate into a contemporary LGBTQ+ context for a YA retelling. I initially wrote this retelling as a script for a class, so I got to lean into the story in a dialogue-heavy format and really have fun with the banter. Because of my focus on matchmaking, it ended up being more of a mix of Much Ado and Jane Austen’s Emma than I had originally planned—I didn’t even notice how much of Emma had crept in there until my agent pointed it out. So the main character’s name is a total coincidence!

When I started turning the script into a manuscript, I brought over a lot of the dialogue, and I also got to fill in the characters’ voices by telling the story from Emma and Sophia’s points of view. Through that process, I got to balance the fun elements of Much Ado I love so much with the characters’ interiorities and the issues they’re dealing with—for Emma, that’s coming out to her parents as bisexual, and Sophia is grappling with the aftermath of her parents’ divorce. 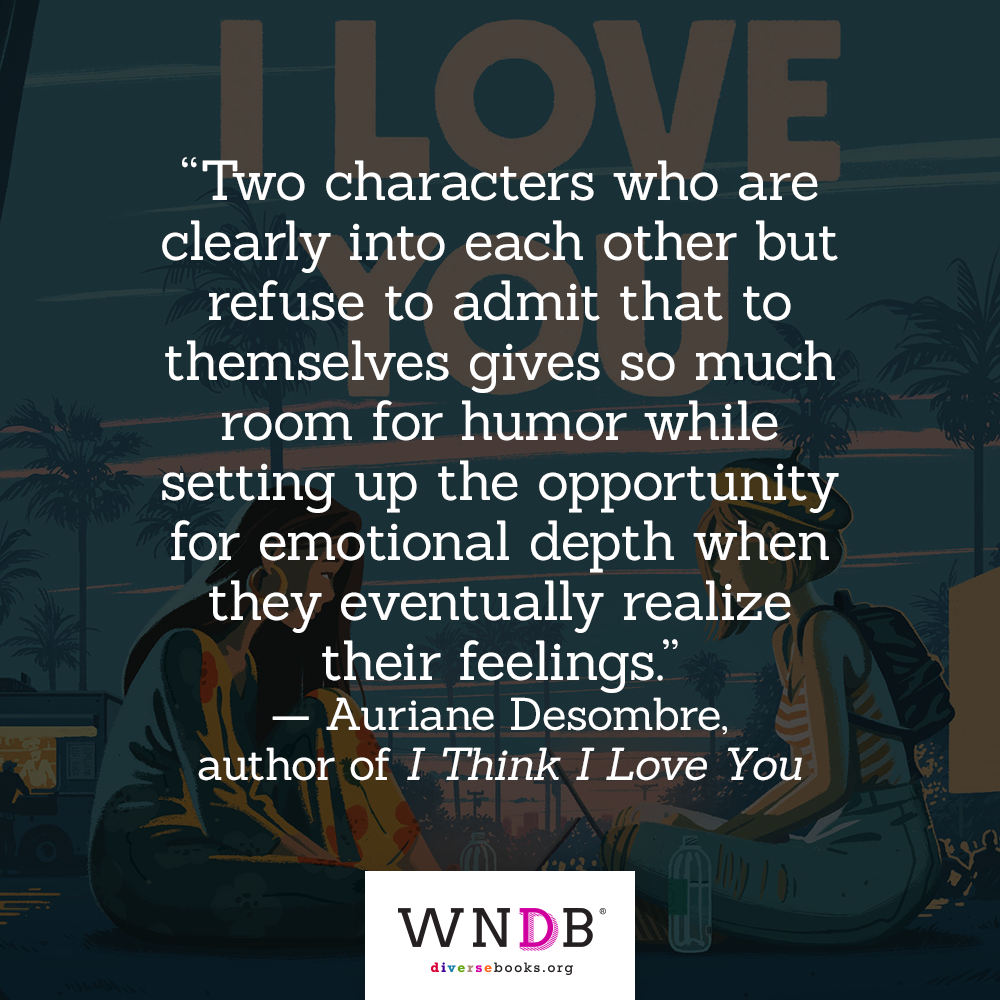 A lot of the tension between Emma and Sophia comes from their different ideas about what will win the film festival competition. Can you talk about each characters’ worldview (especially about art) when the book starts and how they evolve as the story goes on?

Emma and Sophia’s different views on what kind of movie they want to make reflect their views on love and relationships. Emma is a total romantic, and she has this idealized view of love that comes from the grand gestures in rom coms. When Sophia hears about the film project, she pushes against Emma’s vision. She’s a lot more cynical than Emma is, so she’s totally closed off to the idea of making a rom com, and she thinks a more “artistic” film exploring her relationship to her estranged home will resonate more with a film festival crowd.

Their refusal to compromise ultimately splits their friend group into two filmmaking groups, forcing the friends to compete against each other. Their friends concoct a plan to heal the divide, but their plot ends up taking on a life of its own and has some unintended consequences.

What do you think some of the essential elements are when writing a compelling romance and how did these elements play out in your story?

I always think the most romantic parts of romances are in the matter-of-fact moments. There may or may not be some big gestures and declarations happening in I Think I Love You, but ultimately it’s the little moments they share that convince Emma and Sophia that their feelings for each other aren’t as antagonistic as they might have once thought.

Since they’re both making movies that channel their feelings about romance into their art, I also got to examine their relationship to romance as a concept as well as to each other. Emma’s finally getting the romance she’s wanted for so long, but it’s with someone so unexpected, and real-life romance doesn’t always look like the rom com moments she’s imagined for herself. Meanwhile, Sophia is fighting against romance because she’s seen it end in heartbreak so many times, and doesn’t want to go through that again. Coming together requires them to overcome their individual misconceptions about romance so they can fully admit their feelings for each other.

I Think I Love You plays with the rivals-to-lovers trope. What do you think is so engaging about this trope and what was your process for writing it in this story?

Rivals-to-lovers is my absolute favorite trope. Nothing gets me to ship two characters faster than them professing their eternal hatred for each other. Two characters who are clearly into each other but refuse to admit that to themselves gives so much room for humor while setting up the opportunity for emotional depth when they eventually realize their feelings.

In I Think I Love You, Emma and Sophia go on that journey by first clashing over their movies and then growing closer as they come to understand the reasons behind their disagreement, while also bonding over their shared passion for film.

What other YA books do you see I Think I Love You as being in conversation with? And do you have any recommendations for YA books, either published or upcoming?

I’m so excited about all the f/f rom coms coming out this summer! You Should See Me In a Crown by Leah Johnson and The Falling in Love Montage by Ciara Smyth both look incredible, and I’m so excited about the queer representation they’re bringing to YA romance. For queer representation outside of the rom com genre, I can’t wait for Throwaway Girls by Andrea Contos, an absolutely gorgeous thriller with a bi protagonist that got me in trouble for reading in class because I simply could not put it down.

I also highly recommend Not Your #LoveStory by Sonia Hartl, Dear Nemesis by Annette Christie, and Today Tonight Tomorrow by Rachel Lynn Solomon, three rom coms coming out soon that will definitely melt your heart! 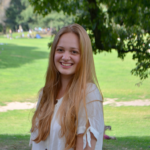 Auriane Desombre is a former English teacher currently pursuing an MA in English Lit at NYU and an MFA in Creative Writing for Children at The New School in New York. I Think I Love You is her debut novel. Follow her on Twitter @AurianeDesombre.

Previous Post: « WNDB and the Library of Congress 2021 Symposium on Diversity in Children’s Literature Celebrates Creating Communities
Next Post: Life in Spanglish »