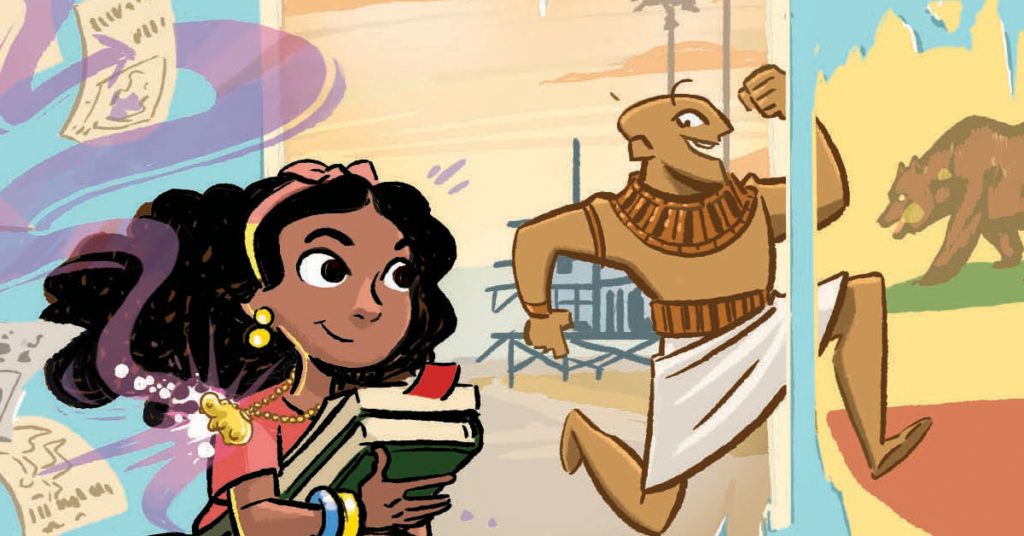 Today we’re pleased to welcome Bassem Youssef and Catherine Daly to the WNDB blog to discuss their middle grade novel The Magical Reality of Nadia, out February 2, 2021! 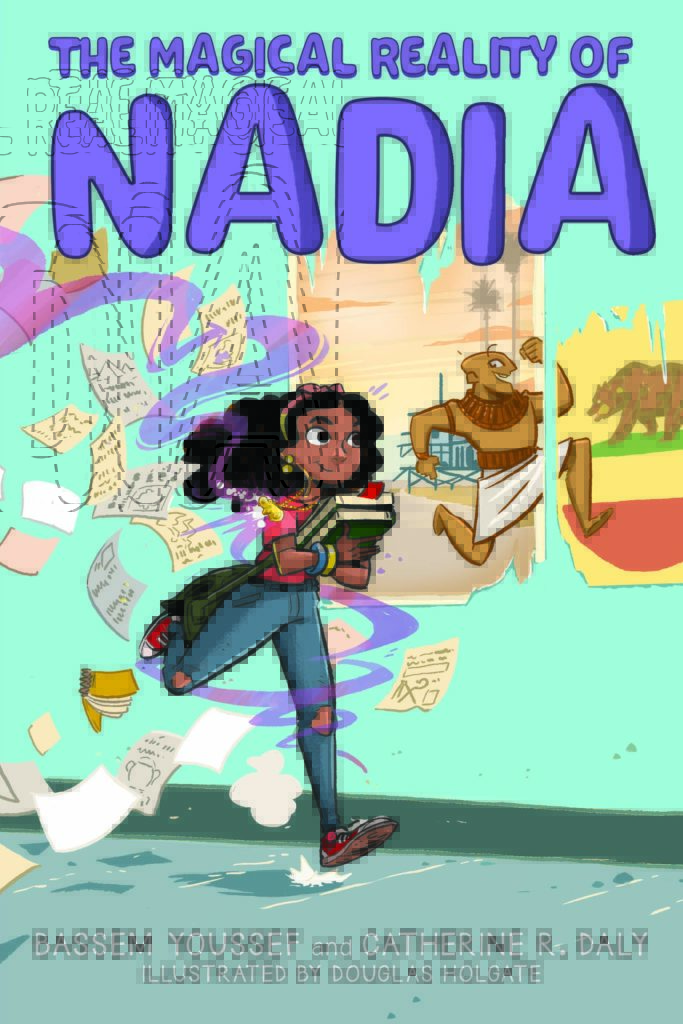 Nadia loves fun facts. Here are a few about her:

• She collects bobbleheads — she has 77 so far.
• She moved from Egypt to America when she was six years old.
• The hippo amulet she wears is ancient… as in it’s literally from ancient Egypt.
• She’s going to win the contest to design a new exhibit at the local museum. Because how cool would that be?!

(Okay, so that last one isn’t a fact just yet, but Nadia has plans to make it one.)

But then a new kid shows up and teases Nadia about her Egyptian heritage. It’s totally unexpected, and totally throws her off her game.

And something else happens that Nadia can’t explain: Her amulet starts glowing! She soon discovers that the hippo is holding a hilarious — and helpful — secret. Can she use it to confront the new kid and win the contest?

From political satirist and comedian Bassem Youssef, aka The Jon Stewart of the Arab World, and author Catherine R. Daly comes a humorous and heartfelt story about prejudice, friendship, empathy, and courage.

Bassem and Catherine, can you tell us what it was like working together on this book? What was your writing process like?

Bassem Youssef: I am beyond thrilled to work with Catherine. I have and learned quite a lot from her. And let me tell you that the learning process is alive and well. When I pitched the idea to scholastic, they asked me if I want to team up with someone with experience writing for kids and I was all for it. I looked at this as a learning experience that can benefit me and the book. I came up with the original idea and characters but Catherine was the one who breathed life into the story. The structure and the little details she put in made all the difference. We corresponded a lot and sent each other ideas back and forth but I have to tell you that without her there would have been no Magical Reality of Nadia.

Catherine Daly: As anyone who has seen Bassem onscreen or onstage can tell you, he is an unbelievable force of nature. Working with him has been a blast! He’s full of remarkable ideas, has so much energy, and is, of course, crazy funny. I loved his concept and the characters he created when I first saw them on paper, but when we met in person with our amazing editor Katie Woehr, I really understood his vision for this book. We met again to kick around plot points and themes. The outline, first draft, all the other drafts, and finally, the incredible artwork by Douglas Holgate were all discussed through emails and Zoom meetings.

The protagonist, Nadia, loves to collect fun facts. Can you share one of your own favorite fun facts?

BY: Most of my own fun facts stem from the fact of how we continue to discover history in a new light. Many of the things that we were told, we believed as truth but as we grow up and we read for ourselves we discover how this information was passed on to us without us realizing it wasn’t really true. I am a fan of reading about things that were taken for granted but turned out to be something else. Like for example how we grew up being told that “Breakfast is the most important meal of the day” only to realize that this was not based on any medical research but rather a marketing strategy by a cereal company. Having said that, I am in no way implying that kids should stop eating breakfast!!!

CD: That the indentation below your nose is called a philtrum and the plastic end of your shoelace is called an aglet. I learned this in the third grade in an issue of Dynamite, my favorite magazine. Thirty-plus years later I was at a work lunch with a woman who used to be the magazine’s editor. I told her how much I loved Dynamite and that those facts had stuck with me after all those years. It turned out she wrote that article so I got to thank her in person!

What’s one piece of research you found for this book that you weren’t able to use in the story?

BY: Part of the book is exploring  Egyptian mythology and bringing back some of these awesome stories to teach kids about the world of today. I am a huge fan of Egyptian history not just because I am Egyptian but also because it has really amazing stories. One of the stories that I found was a famous myth that involved battles between the Egyptian Gods specifically between Ra and his daughter Hathour. The myth was called “The Book of the Heavenly Cow.” It involves humans rebelling against Ra and him sending his daughter Hathour to fight them but she goes a bit too much. Obviously, this could be used in a Game of Thrones-like story, not for a children’s story. But I liked the whole thing about rebellion against power and how Ra comes to terms with his daughter.

CD: We originally had a scene where Titi teaches Nadia a lesson about bullies through the story of King Tut’s parents, the beautiful Nefertiti and the bullheaded Akhenaten, who had some very unpopular ideas during his rule, including deciding that everyone should only worship one god instead of many. Then Scholastic project manager Ava Vitali, who also happens to be an Archaeologist and Egyptologist, suggested that the fable The Eloquent Peasant was a better fit and we all agreed. Now we get to see Titi and Nadia as donkeys, so it’s a win-win for everyone.

What can you tell us about the magic in the “magical reality” of Nadia without spoiling anything?

BY: We have the mentor in this story who is Titi. He is an ancient Egyptian teacher who was looked in a pendant, kind of what we have seen in the genie in Aladdin. Because of an ancient curse, he is limited to appear in books and papers that’s why we see him on the cover running along with Nadia in a poster. A huge part of the magic is how Titi uses his powers to make Nadia learn about history not just through books but as she is inside the books.

What other books do you see The Magical Reality of Nadia as being in conversation with? And do you have any recommendations for published or forthcoming books?

BY: Honestly, this is a tough question. I haven’t seen books that deal with Egyptian mythology and, at the same time, bring this to be a part of a contemporary conversation of what is happening in this country and the tension we might have because of our differences and backgrounds. I am sure there are books out there that can discuss similar issues, I just might not be aware of them.

CD: I really enjoyed Kelly Yang’s Front Desk. It’s another immigrant story. The voice is very different from Nadia’s, as are some of the themes, but there are similarities in the two girls’ stories, too.

BY: That might be the toughest one yet. I can’t think of anything. Sorry! But I will continue to think about it.

CD: Q: Would you like some extra time added to your deadline? A: Yes, please! 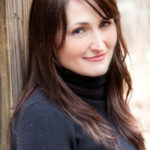 A former editor at Disney, Harper, and Scholastic, Catherine Daly has written many books for young readers, including the Petal Pushers middle grade series, the Disney Fairies chapter book Prilla and the Butterfly Lie, and popular paperback titles such as Whiskers, Knights, All Aboard Cars, and Daddy and Me. She lives in New York City with her family.

Previous Post: « Why I Didn’t Go to Chinese School for Very Long
Next Post: People With Chronic Illness Are Missing From YA Fiction »
Save the date for the #WalterAwards23! You can now