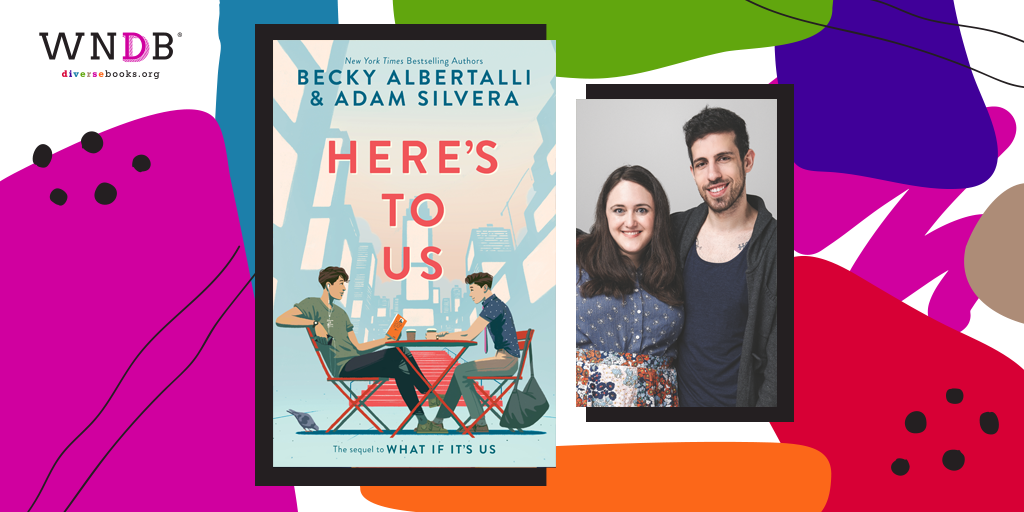 Today we’re pleased to welcome Becky Albertalli and Adam Silvera to the WNDB blog to discuss their YA novel Here’s to Us, out today!

Becky Albertalli and Adam Silvera reunite to continue the story of Arthur and Ben, the boys readers first fell for in the New York Times bestselling rom-com What If It’s Us.

Ben survived freshman year of college, but he’s feeling more stuck than ever. His classes are a slog, his part-time job working with his father is even worse, and his best friend Dylan’s been acting weird for weeks. Ben’s only real bright spot is his writing partner Mario, who’s been giving him a lot of Spanish lessons and even more kisses. Mario’s big Hollywood dreams make Ben start to dream bigger—and the choices he makes now could be the key to reshaping his future. So why can’t he stop thinking about a certain boy from his past?

Arthur is back in New York City for the first time in two years, ready to take the theater world by a storm as the world’s best . . . intern to the assistant of an off-off-Broadway director. Of course, it sucks to be spending the summer apart from his sweet, reliable boyfriend, Mikey, but he knows their relationship is strong enough to weather the distance. Which is why it’s no big deal when his ex-boyfriend Ben stumbles back into the picture. And it’s definitely fine that Ben’s blissfully happy with some mystery boy. First loves are special, but it’s way too late for what-ifs. Right?

Even as the boys try to shake off the past, they keep running into each other in the present. Is this the universe trying to tell them there’s a do-over in their future?

Here’s to Us is sure to be welcomed by fans old and new of these authors and their previous collaboration, What If It’s Us. Critically acclaimed and bestselling authors Becky Albertalli and Adam Silvera combine their talents in these smart, funny, heartfelt novels about two very different boys who can’t decide if the universe is pushing them together—or pulling them apart. 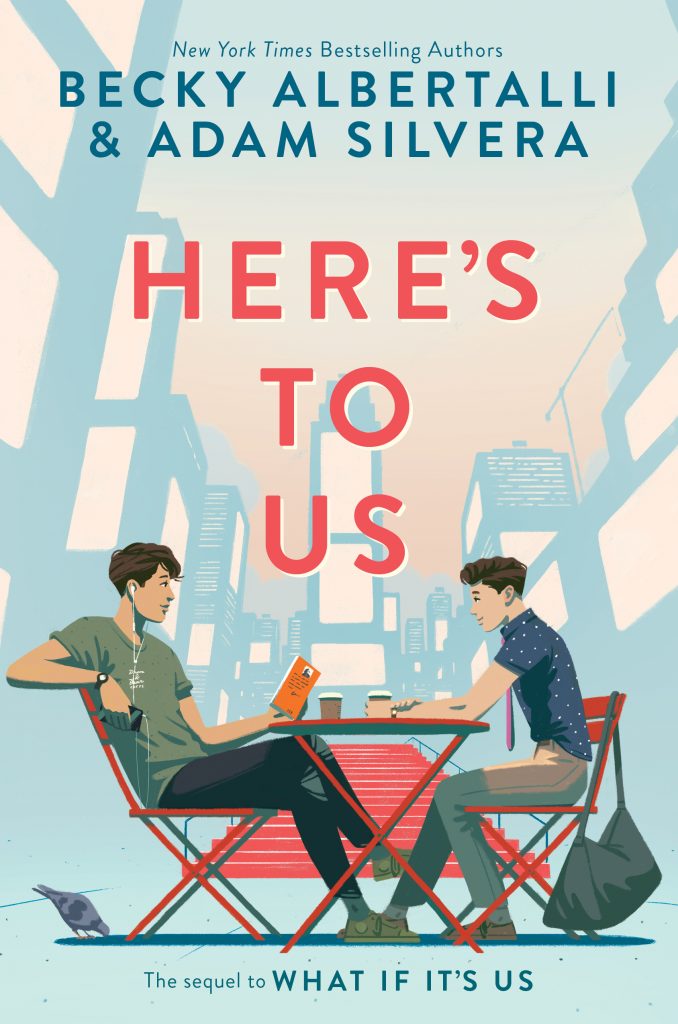 The past year and a half has not been easy and I’m guessing the state of the world had an impact on your writing process. What was your collaboration like the second time around and did anything surprise you?

ADAM: It was really tricky this time! I was on deadline for Infinity Reaper, which is the second book in my fantasy series, and that alone was a really daunting task. So whereas Becky and I wrote What If It’s Us together by bouncing chapters back and forth, we weren’t in the trenches together this time around because I had to focus on Reaper.

BECKY: COVID definitely made writing more complicated. For me, the biggest logistical challenge was having my kids in remote learning—they weren’t quite old enough at the time to work without supervision, so my work week was basically slashed in half. I knew I’d be progressing at a much slower pace than usual, so I couldn’t afford to wait until Adam finished Reaper. It was incredibly lonely and isolating—but on the bright side, I do think this disconnect ultimately served the story. At the start of this story, Arthur and Ben really aren’t on the same page, and there’s so much they don’t understand about what’s going on in each other’s heads.

What If It’s Us has section headers for the different parts of the book using song lyrics from the Dear Evan Hansen track “Only Us” and the tradition continues in Here’s to Us with the lyrics fitting the story so perfectly—if you could choose a different musical theatre song, or even specific lyrics, to fit the narrative, what would it be?

BECKY: I don’t know that I could pick another musical that would fit as well, but if I really tried, I bet I could retell the whole duology using only Taylor Swift songs.

Without giving too much away, what were some of your favorite scenes and/or lines of dialogue to write in Here’s to Us? Is there anything either of you had to cut that still lives in your head rent free?

ADAM: It’s pretty deep in the book so I can’t say too much, but I love the escape room chapter so much.

BECKY: I think getting to write Dylan’s dialogue filtered through the brain of Drunk Arthur was probably a career highlight for me.

Ben is a white-passing Puerto Rican who doesn’t speak Spanish fluently, but he starts to learn more Spanish in Here’s to Us from someone with a similar background—why was that important for his character?

ADAM: I’ve really started struggling with my identity as a Puerto Rican the past few years. I’m constantly asking myself so many questions: do I have to define myself as white-passing every time I tell someone I’m Puerto Rican? Would people take me more seriously if I spoke fluent Spanish? Spent more time in Puerto Rico? Even though I’m in my early thirties, the thoughts feel very coming-of-age-ish to me so I wanted to explore them through Ben because I know he would be feeling the same feelings.

I love all the Jewish references in regards to Arthur’s character. It really makes him feel authentic and the reader can tell how important being Jewish is to him as a person. Why is it valuable to have Jewish representation in mainstream, traditionally published YA novels?

I can’t tell you how much I love this question. I’ve gotten so used to Arthur’s Jewishness being erased in conversations about intersectional diversity, and it breaks my heart a little. Being Jewish means different things to different people, of course, and that meaning can change over time. Certain aspects of my experience have shifted quite a bit in the last couple of years—for example, I’m much more aware of the pervasive influence of antisemitism. And I think it’s made me that much more desperate for representation in books—and that much more motivated to lean into my characters’ Jewishness when I write.

I really love Dylan’s extra-ness—he is legitimately hilarious. How did you come up with all the Ben nicknames that Dylan gives him?

ADAM: Anytime we get to write Dylan it’s a JOY. I love his extra-ness. And the nicknames kind of write themselves in the moment! Though maybe once or twice an idea will come about while out in the world and I’ll jot it down on my phone.

BECKY: Oh, it’s wild—it really feels like Dylan takes the wheel every time I get to write him. I honestly feel bad for Arthur and Ben—think about all the alone time they’ve had to sacrifice, because both of us keep wanting to sneak Dylan into every scene.

You’ve spoken about how the ending of What If It’s Us was rewritten four times before the final version, but one might say that the conclusion of this story is simply perfection (perhaps even leaning more toward a Becky finale than an Adam one whereas the first book definitely felt like a blend)—did you feel pressure from your readers to craft the ending in a certain way? Did you always know what would happen in the end? And I hope this isn’t a spoiler, but the epilogue shows Arthur and Ben in their early twenties, so what was it like writing an aged up version of these characters?

ADAM: We knew readers have come to expect different endings from our respective works so we were always going to walk that line of readers not knowing how we would deliver with our collaboration. Something that spoke more to one of our sensibilities or a combination? We feel our ending definitely hits a sweet spot. As for the pressure, it was always about crafting a realistic ending, not just what readers want the most.

BECKY: Yes to all of this!! It’s funny, because while we love to joke about the idea of “Adam endings” and “Becky endings,” we’ve always been on the exact same page with this duology. The defining tension of this story has always been the push-pull between realism and romantic idealism. We really wanted the ending to deliver on both fronts—which is why we felt really strongly about how—and when– we ended the story.

What is the main thing you want readers to take away from Here’s to Us?

ADAM: What I love most about this duology is that you know these boys love each other but the odds were against them and they called it quits. So often I read a book where I’m not convinced the romantic pairings would actually survive their circumstances, but it just feels like they were kept together for the sake of it. We could’ve easily done that with What If It’s Us, and since we didn’t, we got to show readers that it’s okay if you don’t get your happily ever after on the first go. Sometimes it’s a new person. Or a do-over with an old one.

BECKY: Yes! I think for me, it’s the idea of do-overs, and this really was the perfect chance to explore that even more deeply than we could in What If It’s Us. Even the existence of Here’s To Us is a do-over! I really think we undervalue the importance of making and learning from mistakes and wrong turns—in life, in love, in friendship, in activism. But the truth is, we’re all rough drafts.

Do you have any recommendations for recently published or forthcoming YA books?

ADAM: I really loved Instructions for Dancing by Nicola Yoon and the Sky Blues by Robbie Couch!

BECKY: SO many!! If you like our duology, a few books I’d recommend are:

Becky Albertalli and Adam Silvera were strangers when their debut novels, Simon vs. the Homo Sapiens Agenda and More Happy Than Not, sold within days of each other. Two weeks later they read—and obsessed over—each other’s books, and two months later the idea for What If It’s Us was born over email. Both authors were named Publishers Weekly Flying Starts and are Lambda Literary Award nominees and #1 New York Times bestsellers. Becky lives in Georgia and Adam lives in Los Angeles, and they live together in each other’s text messages. 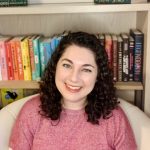 Aleah Gornbein currently works in publicity at Holiday House, the first American publisher founded with the intent of only publishing children’s books. She liked school so much she went back to get a Master’s in Publishing a year after graduating college. As someone who has yet to read a story with all of her identities represented, her goal is to help put diverse books into the hands of kids. You can find her shouting about books on TikTok and Twitter (@bookworm613) or at Books of Wonder events sitting in the back row (when we’re not in a pandemic).