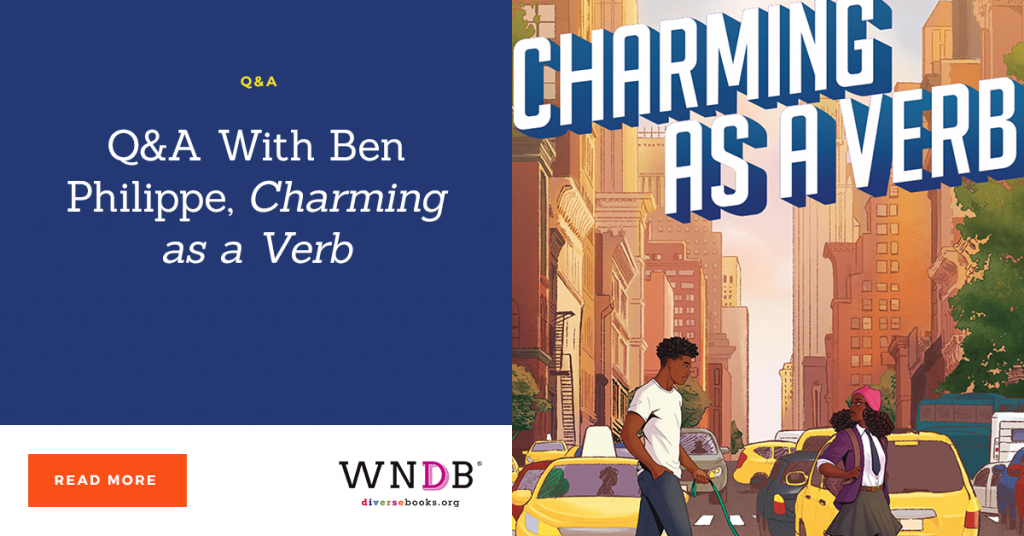 Today we’re pleased to welcome Ben Philippe to the WNDB blog to discuss his YA novel Charming as a Verb, out September 8, 2020! 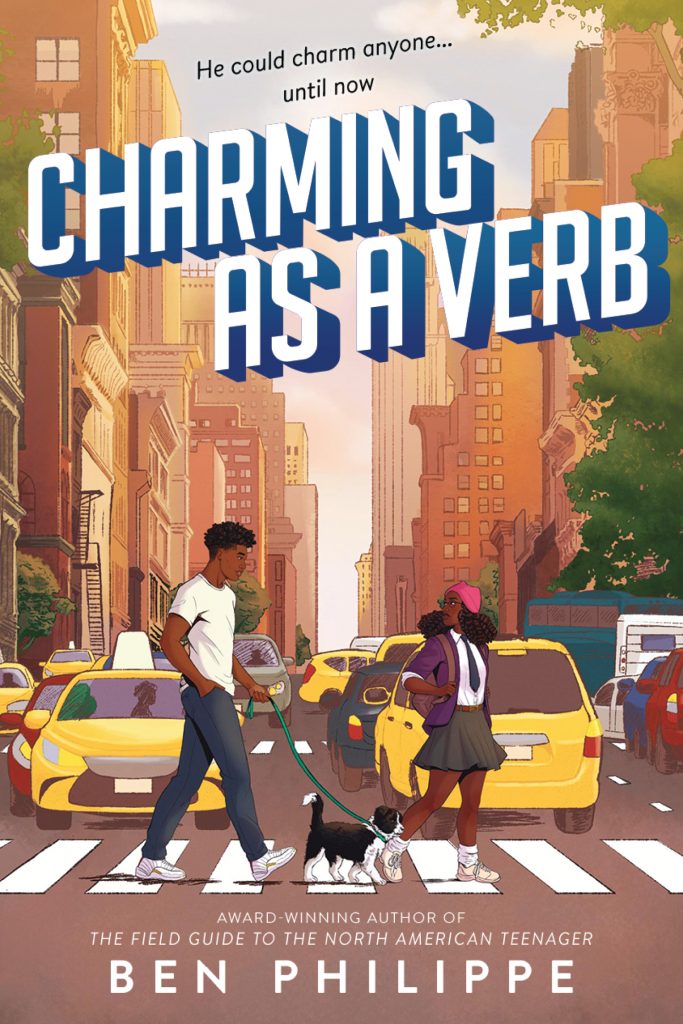 Henri “Halti” Haltiwanger can charm just about anyone. He is a star debater and popular student at the prestigious FATE academy, the dutiful first-generation Haitian son, and the trusted dog walker for his wealthy New York City neighbors. But his easy smiles mask a burning ambition to attend his dream college, Columbia University.

There is only one person who seems immune to Henri’s charms: his “intense” classmate and neighbor Corinne Troy. When she uncovers Henri’s less-than-honest dog-walking scheme, she blackmails him into helping her change her image at school. Henri agrees, seeing a potential upside for himself.

Soon what started as a mutual hustle turns into something more surprising than either of them ever bargained for. . . .

This is a sharply funny and insightful novel about the countless hustles we have to keep from doing the hardest thing: being ourselves.

Charming as a Verb focuses a lot on the pressure to get into college (especially a “good college”) and the impact this has on first-generation immigrants. Why did you want to mirror this experience for teens who struggle with the pressure to go to a certain school? What do you hope readers who are similar to Henri take away from his journey?

Looking back, my SATs were the most important exams I ever took. That is so weird to say, but it’s true. My little cousin was about to take hers last year and her mother wanted me to calm her nerves about the whole thing but I only ended up stressing her more out because, yeah, no, that thing kind of shaped the course of my entire life. Again: Very weird to say.

I think that’s why the 2019 college admissions bribery scandal intrigued so many people. In my experience, the overinvolved parties tend to be the students themselves. They want those Dream Colleges so badly! There’s no other option in their minds. There are 5,300 colleges in the United States alone and for so many young people it all comes down to one acceptance letter, one email, one ‘yes.’

I guess I hope that young readers don’t lose too much of themselves in the college-applying process. I say this now that I’m (bravely) in my 30s, but back then I would have overperformed in the Hunger Games for an acceptance letter to my Dream College. President Snow would be blaring the horn telling me to put down the bat because I had won.

As a fellow Gilmore Girls fan, I’m obsessed with your Gilmore opinions. Which season had the worst season finale? Do you think any characters from Charming as a Verb would absolutely love (or hate) GG?

First of all, thank you for asking the right questions, the important questions.

Hands down it was Rory sleeping with Dean at the end of season 5. Ugh. I think that was the pivotal moment at which I realized that screw me, Logan Huntzberger really isn’t going anywhere. My sweet baby boy Jess was also out in the wild, never to be a regular again… It was a personal low point for me.

(Also, looking back, Rory is truly addicted to being a mistress. First Dean’s marriage and later Logan’s engagement in the revival? What happened to you, Rory? Fix your life.)

Someone had to tell me what this means, ha.

Hmm… I think I’m a ‘Boiler’? (They’re metaphors anyway, so I’m going off-script.) I tend to let my ideas boil in the back of my head and then when I feel like the outline will flow, I’ll jump in and start trying to write, collecting all the bits and pieces I’ve amassed in notes, self-emails, and the first 10 pages of just so many notebooks.

Once it comes time to draft, I like having an outline while also still giving myself permission to go off the map completely if that’s what feels right. I’ve written a full draft that had to be ‘Select All’ and backspaced because it was that band and lifeless… Never again!

The cover for Charming as a Verb is beautiful. What was the process of creating the cover like?

Thank you! I love that cover. I think Balzer + Bray just turned on the Steffi Walthall bat signal and she sighed cracked her fingers and made magic like usual. She is also responsible for the phenomenal paperback cover of Field Guide To The North American Teenager. I’m obsessed with Steffi’s art.

I think my only contribution if it even qualifies as such, was the note that Halti should be visibly talking. Figuring out when he’s debating, “charming as a verb” (ayo!), or sharing a real moment with Corinne was a big part of the fun of writing him.

In Charming as a Verb, Corinne blackmails Henri into helping her change her image. What do you love about this trope/plot device? Why do you think it’s so compelling and why does it work for Henri and Corinne’s story?

There’s something kind of intimate about blackmail… and that’s not even the creepiest sentence I’ve written today. In Charming, it immediately breaks through a surface layer of interaction. For Henri, who is still dealing with college interviews, life might be easier if everyone he met just told him you exactly what they wanted from him and how to make them happy.

There’s something almost freeing about this strange young woman who just comes up to him and says “No need for that BS smile: this is what I want; give it to me and I’ll go away.”

As for Corinne, she’s just pragmatic about getting what she wants. It’s not that she doesn’t care what people think about her but she has accepted that she can’t control it. So, she might as well be blunt and save time.

There’s an abundance of dogs in this book because of Henri’s dog walking. Do you have any dogs you love in your own life? Do you have a favorite dog from this book, or are any of the dogs based on dogs you’ve met IRL?

Well, there’s The Creature over there loudly yawning her passive-aggressive yawn right now because I fished a chicken bone out of her mouth on the sidewalk earlier and I guess removed all joy from the universe. It’s going to be a whole afternoon of glares, I can already tell. (Usually, she’s Blue, my six-year-old labrador but the moody alter ego is  “The Creature.”)

But no single dog was plagiarized from my real life.  The dogs of Charming are mostly a mishmash of pups I’ve observed around dog parks in the city. Although, the Upper West Side dog run at Riverside and 105th in Manhattan is more or less how I picture dog walker Henri’s primary dog walk.

What other books do you think Charming as a Verb is in conversation with? And do you have any recommendations for published or forthcoming YA books?

Justin Reynolds’ Early Departures and Punching the Air by Ibi Zoboi and Yusef Salaam. I need that book, man.

Ooh, and Lilliam Rivera’s amazing Never Look Back. I dipped a toe in the other day and it sucked in a whole leg of my afternoon. I was in the middle of edits too. That was dumb.

“What’s making you laugh this summer?” (Kind of understandable why no one is asking it, mind you.)

Anyway, the answer is Dave on Hulu. I love that show.

Ben Philippe was born in Haiti, raised in Montreal, Qc, Canada, and now resides in New York. He is a graduate of the Michener Center for Writers (UT Austin) and holds a Bachelor of Arts from Columbia University. He still doesn’t have a valid driver’s license, which is both #beautiful and #brave.

Previous Post: « Q&A With Victoria Bond, Zora and Me: The Summoner
Next Post: How MFA Programs Can Discourage YA Writers »
Save the date for the #WalterAwards23! You can now