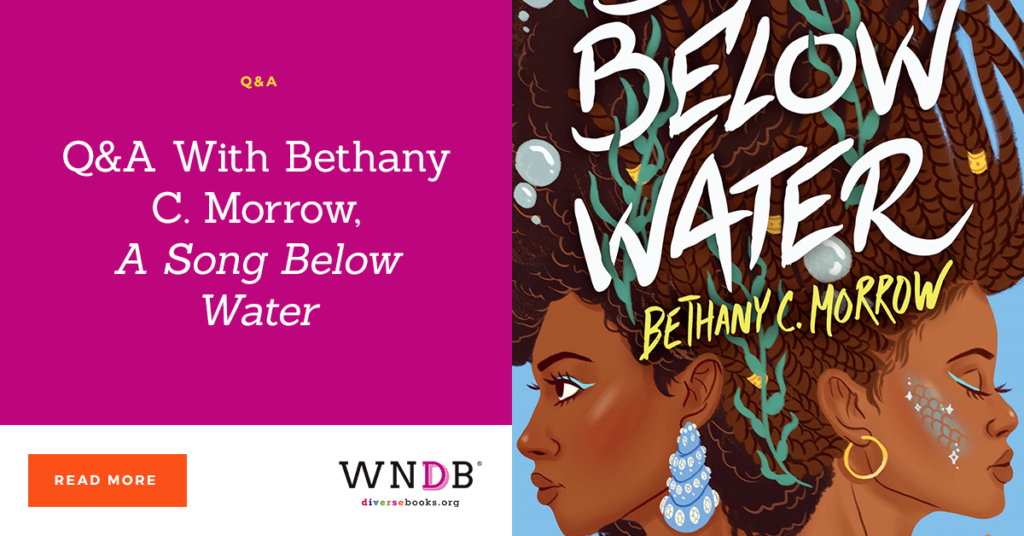 Today we’re pleased to welcome Bethany C. Morrow to the WNDB blog to discuss her YA novel A Song Below Water, out June 2, 2020!

Tavia is already at odds with the world, forced to keep her siren identity under wraps in a society that wants to keep her kind under lock and key. Never mind she’s also stuck in Portland, Oregon, a city with only a handful of black folk and even fewer of those with magical powers. At least she has her bestie Effie by her side as they tackle high school drama, family secrets, and unrequited crushes.

But everything changes in the aftermath of a siren murder trial that rocks the nation; the girls’ favorite Internet fashion icon reveals she’s also a siren, and the news rips through their community. Tensions escalate when Effie starts being haunted by demons from her past, and Tavia accidentally lets out her magical voice during a police stop. No secret seems safe anymore—soon Portland won’t be either. 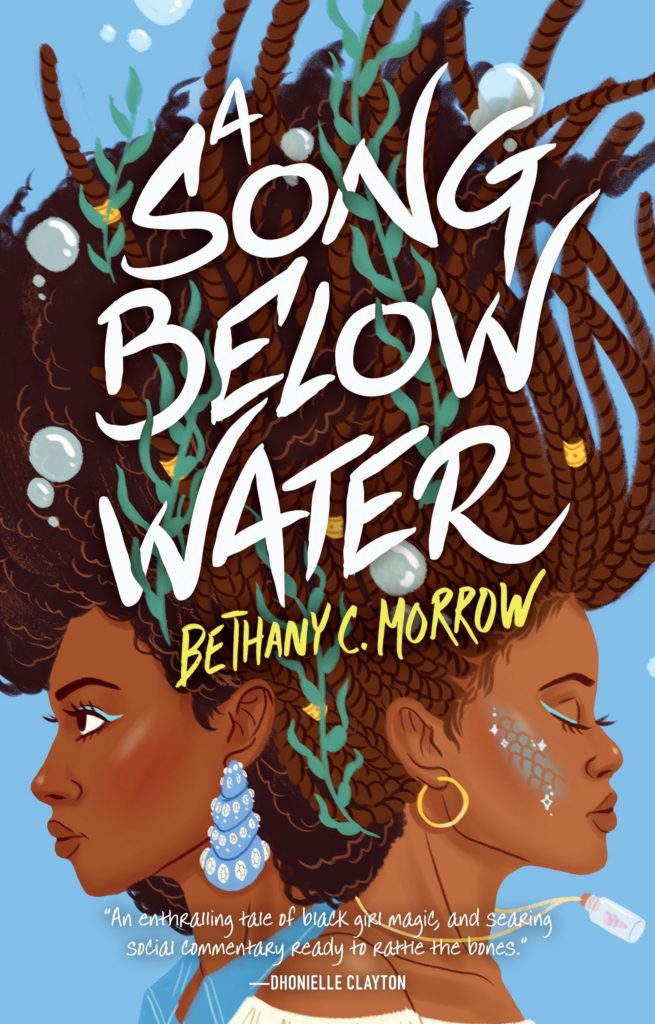 Congratulations on your YA debut! Can you tell us a little bit about your path to publication for A Song Below Water?

Thank you so much! I’d just signed my adult debut novel, Mem, with Unnamed Press when everything happened. I can’t remember the exact overlap anymore, but I know I’d put aside the probably seven or eight revision requests I’d received for ASBW while focusing on Mem, but eventually, I did return it to the requesting agents, and I know my agent and my editor were both at my NY launch event so it was all wrapped up by the time Mem published!

I’d parted ways with an agent before that, and had been actively querying for five years before I went out on my own with Mem, and before the more whirlwind experience with ASBW.

What drew you to writing about sirens? Did Tavia emerge as a siren character or did you feel compelled to write a siren story first and figure out the characters and world later?

Tavia emerged as a siren character, for sure. I was looking at the internet’s response to Black women sharing any opinion or insight whatsoever, and I dm’d my sister, “My voice is power,” in response to that. Because we’re supposed to believe we’re insignificant while at the same time our mere existence results in an often frothing anger. The truth is, we’re powerful. We know that; the world knows that. They hope they can convince us otherwise, and they’re often beside themselves when they can’t. So the line, “My voice is power,” came first, and then immediately I knew the girl who said it was a siren.

A big part of this book is the friendship and sisterhood between Tavia and Effie. What do you love most about their friendship? What aspects of their bond were more difficult to write?

Their bond was second nature. It’s my reality as a Black woman, that I gravitate towards Black women, and that there’s a unique safety and comfort there. It doesn’t mean there’s no harm ever done between Black women, it means that when there is a bond and a safe haven there, it is like no other bond. I was fortunate enough to be born into an even closer one because I have sisters.

A Song Below Water deals with racism, social justice, identity, and politics, and has been called a misogynoir story because one of the major themes is how dangerous it is to be a siren as a Black woman. How do those themes fit into your main character Tavia’s world, which is a Portland, Oregon, where sirens and magic exist? How did you use these themes in a fantasy novel to connect to our contemporary world?

I feel like Portland feels like the type of place, specifically on the West Coast, where magical people would exist, and be known throughout society, and it would just be a “Lol, keep Portland weird” kind of vibe. I also feel like Portland would be the kind of place that thinks it’s really safe for all magical people, despite a very obvious disparity in the way they’re treated.

And I feel like that because that’s what it feels like to be in Portland, for me, as a visiting Black woman, in real life. There shouldn’t a disconnect between what people say and what they actually perpetuate or uphold, but there is largely because, like the rest of the world, there’s a part of “progressiveness” that’s just about feeling past something instead of dedicating the energy and advocacy and work of actually moving past it. Because the consequences of that disparity aren’t felt by the power majority. So the talk feels good enough, and there’s a lack of representation or platform for the people experiencing the marginalization to say otherwise.

Also because progressiveness often celebrates kind language, and therefore eschews “negativity”—and when you’re detailing the plight of marginalization, you’re going to have to “be negative” to tell the truth. My experience of being around self-congratulatory progressive people from the power majority is that their disdain for negativity includes my speech and self-advocacy. They “hate” hate, but too often that includes the people on the receiving end of it. Easier if we disappear so that the problem appears to disappear with us.

This novel, like many stories about someone hiding a secret while living a sort of double life, deals with the fine balance between who you are and how you want others to see you. What were some of your favorite scenes to write in Tavia’s identity journey?

I don’t think of that way—in terms of being a balance between who you are and how you want others to see you. That’s never what it’s about for the violently marginalized. I think what Tavia is experiencing is the friction of being who she is and knowing what it’s safe for the world to know about who she is. To say it any other way feels like infusing it with a concern for validation or approval when what’s really at stake is safety. Stokely Carmichael said, “If a white man wants to lynch me, that’s his problem. If he’s got the power to do it, that’s my problem.”

Tavia is saddled with the concerns of white people not because she particularly cares or wants them to love her, but because she lives in an America—as we all do—where she knows that their desire to harm her comes with the ability to do it and get away with it. So I think you’ll understand why one of my favorite scenes to write in her identity journey was the moment she took back her power during a traffic stop.

Thank you for saying that: It is absolutely an issue of how safe it is to be yourself as a marginalized person and you showed that powerfully with Tavia. What other YA novels do you see A Song Below Water as being in conversation with?

I feel really blessed to be debuting in a year with so many other Black women writing fantasy, and how they’re all so much richer for it, because of what it takes to write ourselves into the narrative, even when we’re dealing in fantastical concepts. I’m excited to hear how people speak about in conversation with other Black girl protagonists coming into their power, like Tracy Deonn’s Legendborn, or even a series that’s already started but has a third novel forthcoming, LL McKinney’s Nightmare-Verse series.

Do you have any recommendations for published or upcoming YA novels?

Other than the ones listed, I’m really excited to read Jordan Ifueko’s Raybearer! I have heard only good things about it and listening to Jordan talk about the main character’s journey on a recent panel really intrigued me.

What is one question that you wish you were asked more often (and can you answer it for our readers)?

I feel like I’m not often asked what my favorite scenes or moments are in my books! For ASBW, one of my absolute favorite moments comes after a pretty traumatizing experience, when the sisters are pulled to safety, and the gargoyle that watches over Tavia’s house takes them to the middle of this peaceful nature preserve, and to keep from getting their clothes muddy or dirty, he comes down and they lay on his back and just have sister talk. I love it. 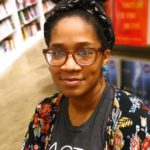 A somewhat-recovering expat living in the American Northeast (with one foot still firmly planted in Quebec), Bethany C. Morrow writes speculative fiction for both the adult and the young adult market. Her adult debut, Mem, was an ABA 2018 Indies Introduce pick, and a June Indie Next pick, and was featured/reviewed in: Locus Magazine, the LA Times, Buzzfeed, Book Riot, Bustle, and Tor.com, among others. She was editor and contributor to Take the Mic: Fictional Stories of Everyday Resistance, which released with AAL/Scholastic in October 2019. Bethany’s YA debut, A Song Below Water, is a contemporary fantasy, and releases in June 2020.

Previous Post: « Cover Reveal for Sugar and Spite by Gail D. Villanueva
Next Post: 5 Authors Share About Their Books for Pride Month »
Applications are open for Literary Agents of Chang