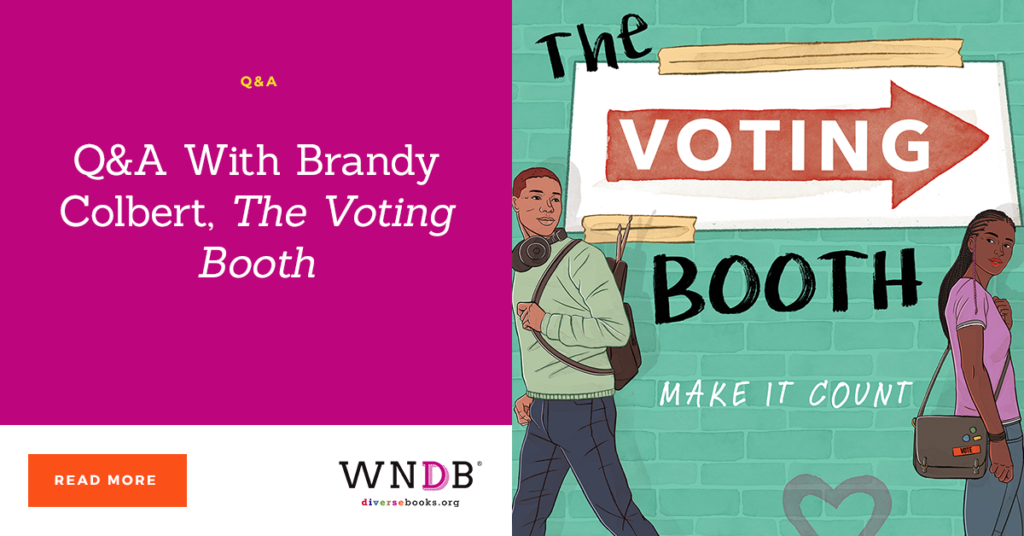 Today we’re pleased to welcome Brandy Colbert to the WNDB blog to discuss her young adult novel The Voting Booth, out July 7, 2020! 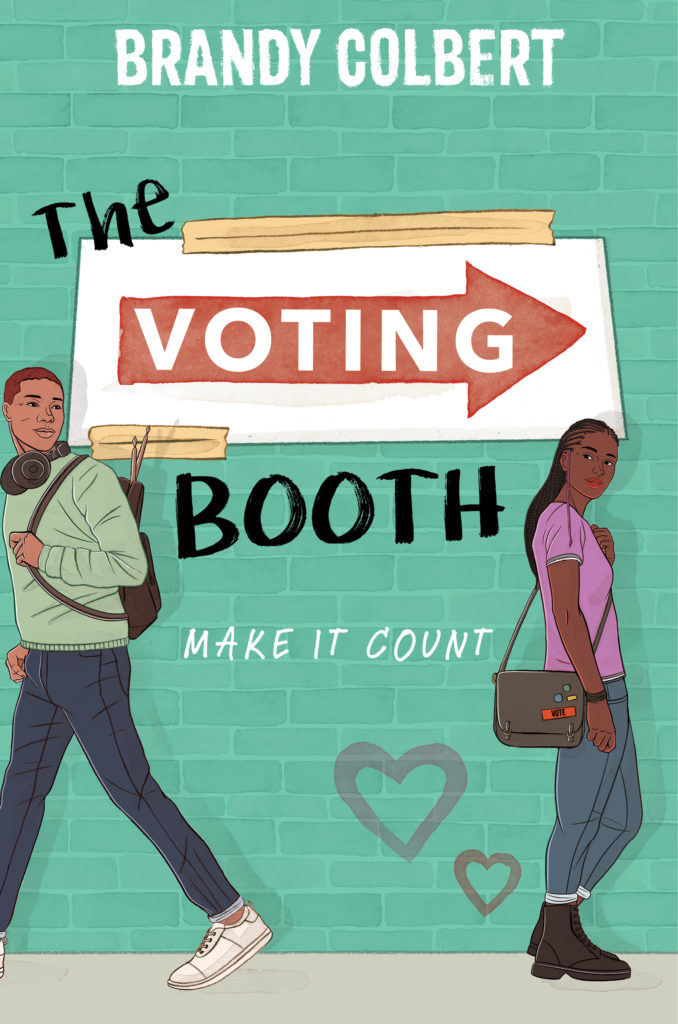 Marva Sheridan was born ready for this day. She’s always been driven to make a difference in the world, and what better way than to vote in her first election?
Duke Crenshaw is do done with this election. He just wants to get voting over with so he can prepare for his band’s first paying gig tonight.

When Marva sees Duke turned away from their polling place, she takes it upon herself to make sure his vote is counted. She hasn’t spent months doorbelling and registering voters just to see someone denied their right. And that’s how their whirlwind day begins, rushing from precinct to precinct, cutting school, waiting in endless lines, turned away time and again, trying to do one simple thing: vote. They may have started out as strangers, but as Duke and Marva team up to beat a rigged system (and find Marva’s missing cat), it’s clear that there’s more to their connection than a shared mission for democracy.

Romantic and triumphant, The Voting Booth is proof that you can’t sit around waiting for the world to change but some things are just meant to be.

What was the inspiration behind The Voting Booth? Why did you want to write this story and why for a young adult audience?

As someone whose parents hail from the American South and grew up there during the tail end of Jim Crow laws, I’ve always been interested in the difficulties of voting, particularly as it pertains to Black Americans in the South. The fight for voting rights was long, incredibly hard, and sometimes fatal; I’ve always felt one of the greatest things I can do to honor my ancestors is to use my voice through voting, which many were not allowed to do for decades. Many teenagers are engaged and informed, and the policies we’re voting on now will affect them in the future; though not everyone is going to be as invested as the characters in my book, it’s important to show that a passion for politics and making your voice heard can start at a young age.

TVB all takes place in one day. How did you keep this organized? Was it difficult to cover all the ground you wanted in such a limited time frame within the novel?

For the first time in my writing life, I followed a strict outline. I’m used to writing books with a pretty loose timeline, so it was definitely a challenge to not only map it out like that but to stay on task and actually follow the outline. I was more worried about cramming too much into one day, so I had to slow down at times and really let the characters enjoy each other and their surroundings rather than trying to move the story along to keep the day moving at a good pace.

Marva has a social media account for her cat. Tell us about that choice, do you have any social profiles for your pets? Or do you follow any pets?

I don’t have any pets, and I don’t actually follow any pets online, but I love animals and am very into cats, especially. I’ve loved them since I was a kid—complete with cat posters and figurines all over my bedroom—but we didn’t have pets when I was growing up, and now I travel a lot so I’ve just gotten used to enjoying other people’s animals. Friends regularly send me pictures of their cats, and if I see a cat, I want to meet that cat! I don’t have a lot of animals in my books, so I thought it would be fun to put one in as an actual character, especially an internet-famous one.

You also love to tap dance. Have you taken any lessons from tap dancing and applied them to your writing process?

I do love to tap! I would say the biggest lesson I’ve taken from tapping and applied to writing is to just let go and enjoy the process. If I get too into my head while tapping, I overthink the steps and trip myself up, but if I just follow the beat and my instincts, I’ll end up nailing it most of the time.

Most definitely a pantser. I only use an outline when forced (see above).

This book covers important issues around getting out the vote, voter suppression, and racism and anti-Blackness. But it’s also got a compelling romance between Marva and Duke, the main characters. What were some of your favorite scenes to write between the two of them?

This is probably the happiest book in terms of romance that I’ve ever written, so it was fun to write their scenes. I really loved when they go to the beach because we get to see Marva loosen up a little and just enjoy her time with Duke. I also loved when Clive, the older man in line ahead of them, thinks they’re together and calls them a cute couple. And, because I also love conflict, I liked writing scenes where they bicker at each other in the car, like Marva grilling Duke about his favorite female drummers.

Is there anything you can tell us about how Marva and Duke are doing after this book wraps up?

I never really imagine lives for my characters after the book ends, but I like to think everyone is doing at least a little bit better than they were when the book began. (And, I suppose I do hope those two ended up seriously dating!)

What other books do you think The Voting Booth is in conversation with? And do you have any recommendations for published or forthcoming YA novels?

The Voting Booth is definitely in conversation with Yes No Maybe So by Becky Albertalli and Aisha Saeed, which I enjoyed so much. I think it would likely pair nicely with two books I’m looking forward to reading, Running by Natalia Sylvester, and You Say It First by Katie Cotugno.

I recently read and loved The Black Kids by Christina Hammonds Reed, which will be out later this year. It’s a fresh look at the 1992 L.A. uprising after the cops who beat Rodney King were acquitted, through the eyes of a wealthy Black girl. Unfortunately, it’s especially relevant to the moment we’re in right now, and it’s an important piece of the conversation, reminding readers that we’ve been dealing with police violence and brutality for many decades without true, lasting change. 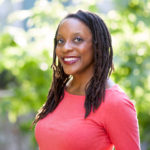 Brandy Colbert is the award-winning author of Little & Lion, Pointe, Finding
Yvonne, The Revolution of Birdie Randolph, and most recently The Only Black Girls in Town. Her short fiction and essays have been published in several critically acclaimed anthologies for young people. She is on faculty at Hamline University’s MFA program in writing for children, and lives in Los Angeles.