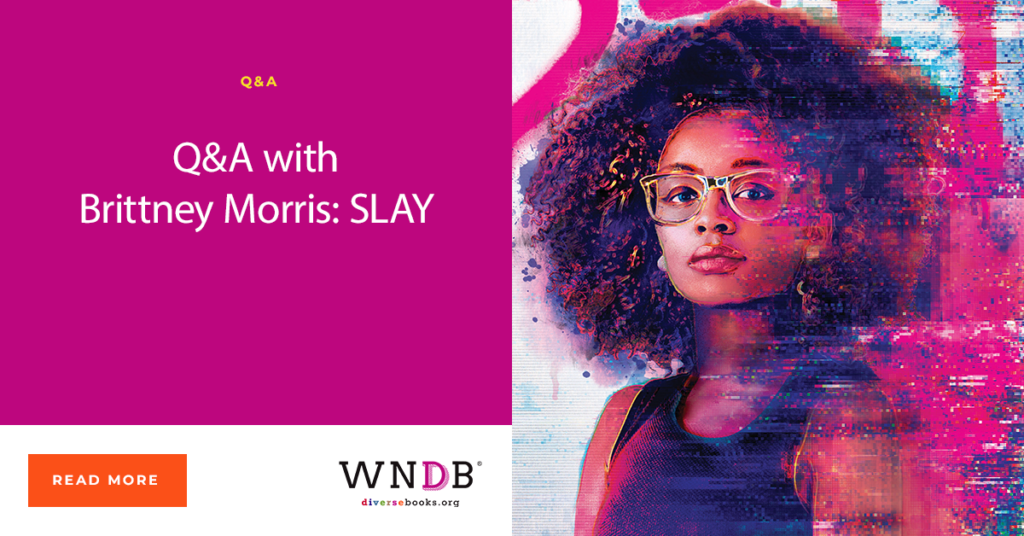 Today we’re delighted to welcome Brittney Morris to the WNDB blog to discuss SLAY, out September 24, 2019. 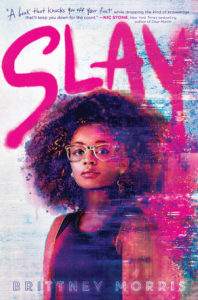 Warcross meets Black Panther in this dynamite debut novel that follows a fierce teen game developer as she battles a real-life troll intent on ruining the video game she created and the safe community it represents for Black gamers.

By day, seventeen-year-old Kiera Johnson is an honors student, a math tutor, and one of the only Black kids at Jefferson Academy. But at home, she joins hundreds of thousands of Black gamers who duel worldwide as Nubian personas in the secret multiplayer online role-playing card game, SLAY. No one knows Kiera is the game developer, not her friends, her family, not even her boyfriend, Malcolm, who believes video games are partially responsible for the “downfall of the Black man.”

But when a teen in Kansas City is murdered over a dispute in the SLAY world, SLAY is labeled a racist, exclusionist, violent hub for thugs and criminals, and an anonymous troll infiltrates the game, threatening to sue Kiera for “anti-white discrimination.” Kiera must preserve her secret identity and harness what it means to be unapologetically Black in a world intimidated by Blackness. But can she protect her game without losing herself in the process?

SLAY tackles the impact trolls have on people’s lives, especially for marginalized creators. Why was this important to write about? What do you hope readers get out of Kiera’s experience with trolls?

As long as people can stay anonymous on the internet (and that’ll probably a long, long time), there will be trolls. Cowardly, selfish, simple-minded trolls who want attention and space to air their dirty laundry. Since there’s not much we can do to get rid of them, and since wagering an online video game universe that you created in exchange for the troll getting lost isn’t always practical, here’s how I deal with them: Ignore them. Block them. To extinguish a fire, starve it of oxygen. Attention is their oxygen.

And if you’re in a situation like Kiera’s, if you’re leading an online community, if you’re a moderator, if you’re a forum administrator and someone’s harassing the people you lead, and for some reason, you’re unable to block them, you have to set an example. Lead in such a way that you expect people to follow. Kiera chose to duel her troll in the open, to let everyone in the game and on the news know what they’re up against if they challenge her. She chose to set an example. But you may choose to ignore, block, or report your trolls and encourage everyone else in the group to do so, and that’s okay too. It’ll often save your energy and time too.

I was absolutely inspired by Black Panther. That was my first experience walking into a room full of Black people and feeling like I belonged, just as I was, with my cardigan and nerdy glasses, having never experienced several major elements of Black culture. I was enough. That love and acceptance I felt when I left the theater changed my life. I wanted to share that experience with the world and remind other Black people that we’re varied enough, that our culture is vast enough, that we live across enough of the world, there’s most definitely a place for them.

How is SLAY, the game, a safe community space for Black gamers? Are there spaces like this in real life that you might recommend to Black teen gamers?

In real life, there are plenty of Black gamers groups on Facebook (these days, those groups are the only thing keeping me on Facebook). There are also Black lets-players (people who upload or stream playthroughs) whose comments and chats tend to be full of people of color—off the top of my head, CoryxKenshin and SonicFox.

Were there any storylines that you wanted to explore in this book that you didn’t have the opportunity to?

I think I explored everything I wanted to, but I could write about Kiera and Cicada’s friendship forever. Black girl best friends are kinda my favorite.

What are you working on next?

The book is about living with the pressure of knowing what your ancestors went through to get you where you are today, the threat of violence, brutality, and incarceration in your future, and navigating the present under the weight of toxic masculinity. Being a Black man is uniquely difficult. It’s high time they had the spotlight on our bookshelves.

Tell us about a couple of published or upcoming books that you’ve loved.

I recently read I Wish You All The Best by Mason Deaver, and I learned so much about how to be a better ally to non-binary folks. Also, the romance was so darn sweet. Ben and Nathan forever and ever.

Upcoming book: A Song of Wraiths and Ruin by Rosie Brown (out June 2020). I can’t talk about this book enough. Think Children of Blood & Bone meets Spirited Away. If you’re a Miyazaki fan like I am, you won’t want to miss this one. Every turn of the page there was a new twist. I wasn’t ready, and neither are you,…but preorder it anyway when it becomes available. 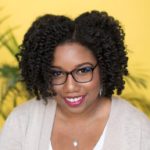 Brittney Morris is the author of SLAY. She is also the founder and former president of the Boston University Creative Writing Club. She holds a BA in economics. Brittney spends her spare time playing video games, slaying at DDR, and enjoying the Seattle rain from her apartment. She lives with her husband Steven, who would rather enjoy the rain from a campsite in the woods because he hasn’t played enough horror games. You can find her online at AuthorBrittneyMorris.com, on Twitter and Instagram @BrittneyMMorris.

Previous Post: « 5 Reasons Why You Should Read a Diverse Book for Your Next Community Read
Next Post: How the WNDB Mentorship Program Helped Me Grow as a Writer »
Applications are open for Literary Agents of Chang