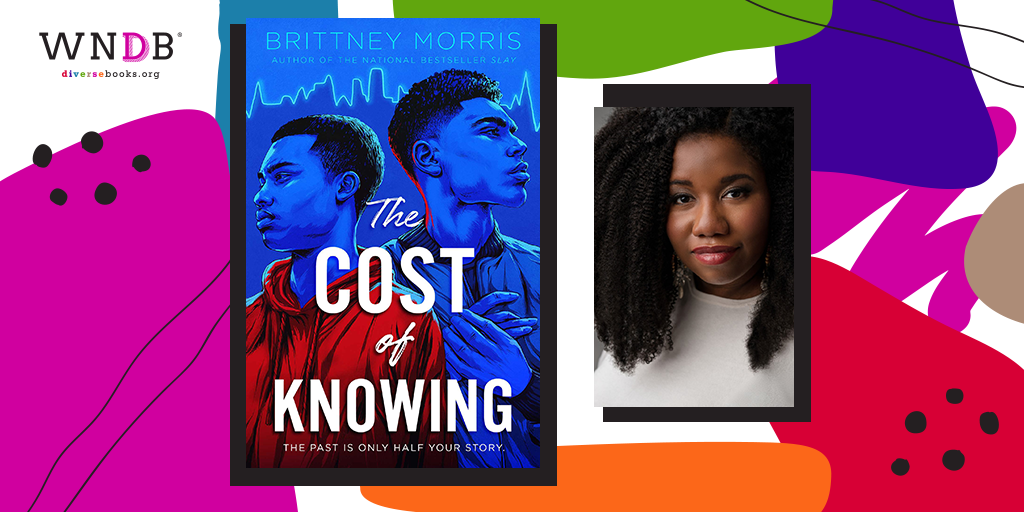 Today we’re pleased to welcome Brittney Morris to the WNDB blog to discuss her YA novel The Cost of Knowing, out April 6, 2021! Read our Q&A with Morris about her novel SLAY.

Sixteen-year-old Alex Rufus is trying his best. He tries to be the best employee he can be at the local ice cream shop; the best boyfriend he can be to his amazing girlfriend, Talia; the best protector he can be over his little brother, Isaiah. But as much as Alex tries, he often comes up short.

It’s hard to for him to be present when every time he touches an object or person, Alex sees into its future. When he touches a scoop, he has a vision of him using it to scoop ice cream. When he touches his car, he sees it years from now, totaled and underwater. When he touches Talia, he sees them at the precipice of breaking up, and that terrifies him. Alex feels these visions are a curse, distracting him, making him anxious and unable to live an ordinary life.

And when Alex touches a photo that gives him a vision of his brother’s imminent death, everything changes.

With Alex now in a race against time, death, and circumstances, he and Isaiah must grapple with their past, their future, and what it means to be a young Black man in America in the present. 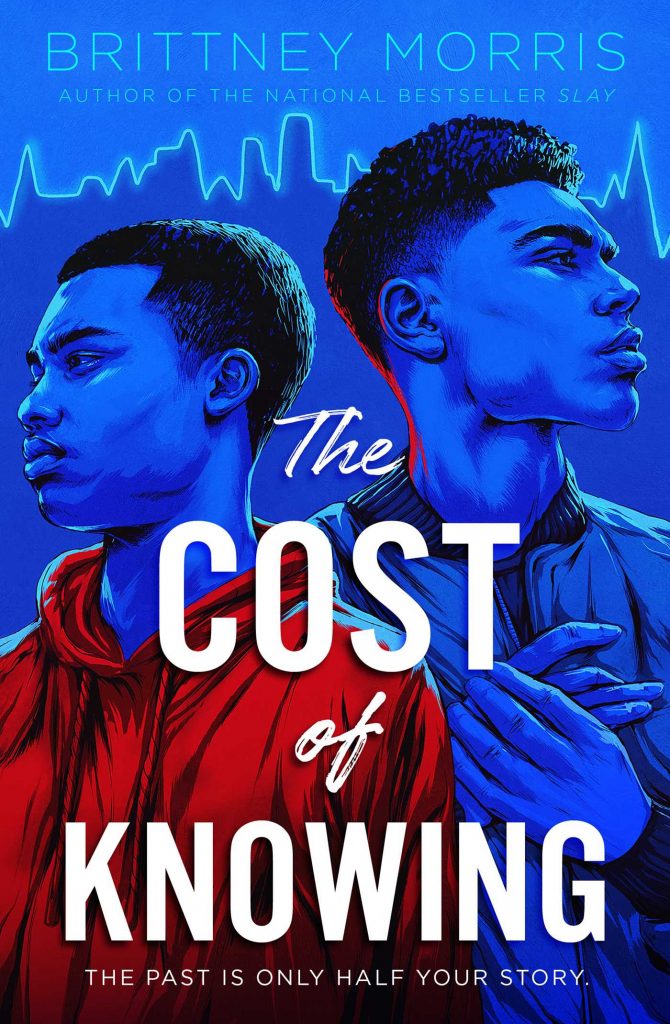 I loved SLAY! What have you learned since publishing Slay and how did that impact your writing of The Cost of Knowing?

Thanks! Oh goodness, I’ve learned so much about publishing and writing and promo and social media and—I don’t know where to begin. It didn’t impact my writing of The Cost of Knowing much though. I still use the same writing process I did when I wrote SLAY. But I think the publishing process for SLAY taught me patience, and to be patient with myself, especially during editing.

You dedicated The Cost of Knowing “To all the Black boys who had to grow up too early.” Why did that feel like the right dedication for this story? Did you write this story with that audience in mind?

I did! It felt like the right dedication because Alex throughout the book grapples with his identity as a Black teenager while taking care of his younger brother, being expected to hold down a job, and other responsibilities expected of Black men. This book is a love letter to Black men who have also felt like the world forced them to grow up too early, just by being who they are.

The Cost of Knowing expertly touches on compounding grief since Alex has lost both his parents and is now worried about losing his brother, Isaiah, as well. How did you develop his character with his grief in mind and how his previous experience with profound loss would impact the urgency of changing Isaiah’s fate?

Thank you! With Alex slowly losing those close to him, there’s mounting pressure to be there for the ones that remain. But there’s also a looming fear that maybe getting close to others is futile if he’s going to lose them anyway. This especially surfaces with his relationship with his girlfriend, Talia. He finds it hard to open up to her because of his past trauma, and his fear of losing her.

While this book is about Alex’s personal experience, it’s also strongly about the painfully universal experience for Black people in America—being seen as a threat and being afraid for your safety and your loved one’s safety. How did you navigate that from a plot perspective, making sure to give Alex’s own emotional journey enough resonance while tackling that this is not a fear that’s unique to him?

I think Alex’s curse—his ability to see into the future—exaggerates the experience of Black people to a point that it’s unignorable to non-Black readers. I might read a sentence like “You’re so articulate” in all its microaggressive glory, but someone else may just see it as a compliment. But when you pair a sentence like that with Alex’s visions and anxiety around holding down a full-time job, maybe it’ll sound a little more obviously backhanded. 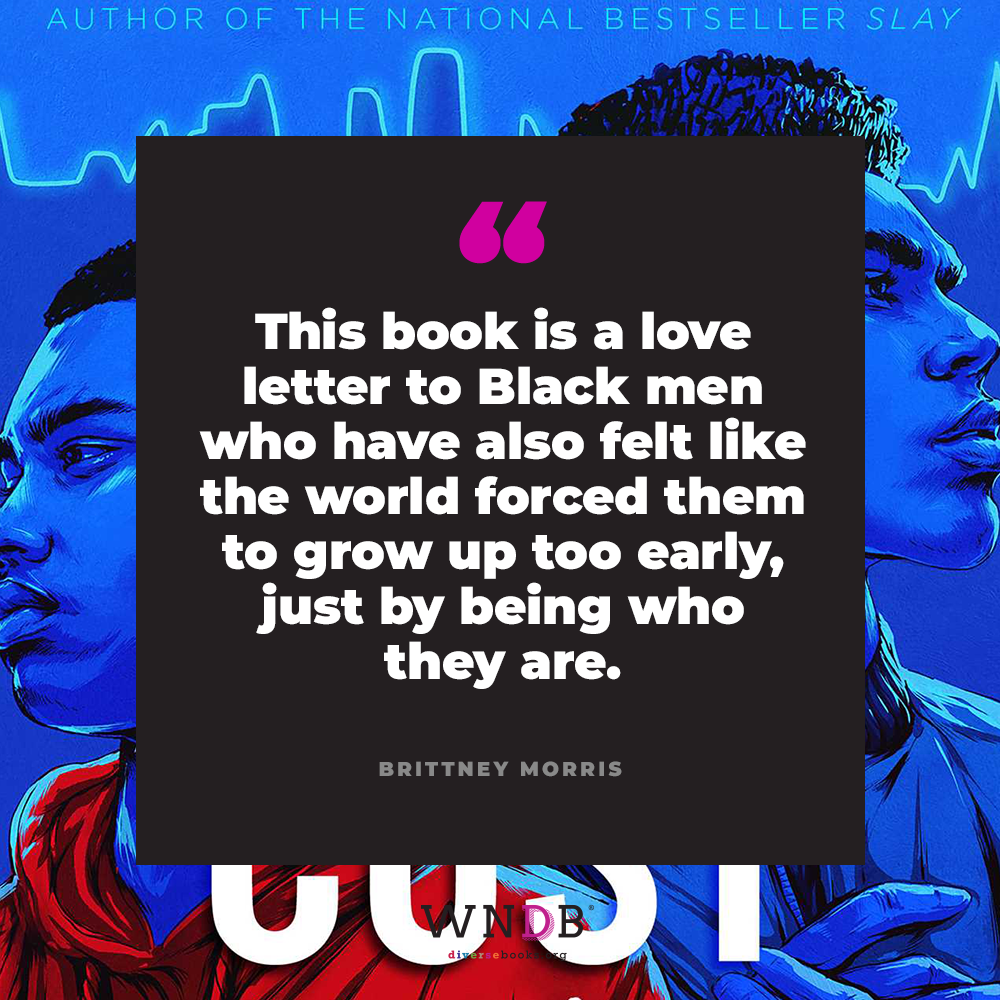 Are you a plotter or a pantser and did that change with this book? How did your writing or revising process surprise you?

Can I cheat and say I’m a plantser (or even more accurately, a planter)? While plotting, I draw big boxes—parameters—what has to happen in the chapter and what the hook is at the end of each. Then while I’m writing, I pants within those boxes. You could even say I plant seeds during plotting and let them grow into whatever they end up growing into while writing. I’m just there to prune, shape, and water.

What was your world-building process for this book? It’s a contemporary setting but there are sci-fi and fantasy elements, prominently Alex’s ability to see the future of things and beings he makes contact with. I’d love to know how you built out your world with all those facets in mind.

Actually, it started with Alex and his curse. I couldn’t get the (then nameless) character out of my head. At first, he worked in a toothpaste factory instead of an ice cream shop, seeing the future of each tube of toothpaste (no idea why it started off so weird—maybe my insomnia finally caught up with me that day), and from there I realized how much it would set off my anxiety as a Black person to be able to see the future. From there, I decided to showcase the unique anxieties of Black men in particular.

Do you have any favorite sci-fi/fantasy book tropes and any you absolutely avoid?

Lovers to enemies is a favorite for me—I love seeing two sweethearts glaring at each other across a flaming battlefield by the end of the book. But enemies to lovers is nice too. I try to avoid any that are harmful, first and foremost—stereotypes, prescriptive representation of experiences that aren’t mine, exalting predatory relationships, violence against women as a plot devices, etc.

If you could design your dream panel for this book, what would it be about? What other authors would you love to have on it with you?

I think it would be about reframing the Black American experience in new ways—particularly through the lens of Afrofuturism. N.K. Jemisin, Roseanne Brown, Nnedi Okorafor, and Bethany C. Morrow would have to be on it!

What other books do you think The Cost of Knowing is in conversation with?

They Both Die at the End by Adam Silvera

A Psalm of Storms and Silence by Roseanne Brown

The Marvelous by Claire Kann

Brittney Morris is the author of SLAY and The Cost of Knowing. She is also the founder and former president of the Boston University Creative Writing Club. She holds a BA in economics. You can find her online at AuthorBrittneyMorris.com and on Twitter or Instagram @BrittneyMMorris.

Previous Post: « Why It’s Important to Talk to Kids About Disability and “What Happened to You?”
Next Post: Q&A With Olivia Funderburg, Managing Editorial Assistant »
We're thrilled to reveal the cover for TOKYO NIGHT