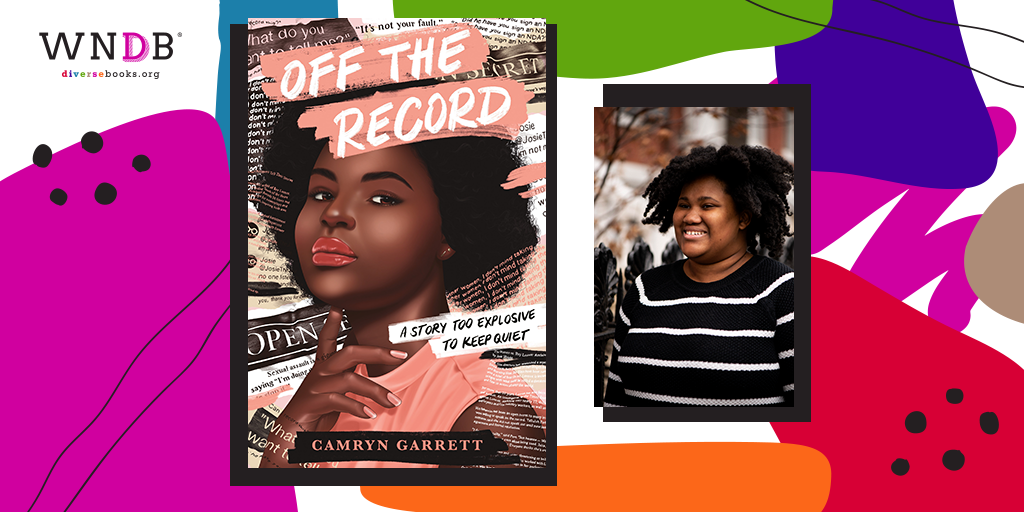 Today we’re pleased to welcome Camryn Garrett to the WNDB blog to discuss her young adult novel Off the Record, out May 18, 2021!

The behind-the-scenes access of Almost Famous meets the searing revelations of #metoo in this story of a teen journalist who uncovers the scandal of the decade.

Ever since seventeen-year-old Josie Wright can remember, writing has been her identity, the thing that grounds her when everything else is a garbage fire. So when she wins a contest to write a celebrity profile for Deep Focus magazine, she’s equal parts excited and scared, but also ready. She’s got this.

Soon Josie is jetting off on a multi-city tour, rubbing elbows with sparkly celebrities, frenetic handlers, stone-faced producers, and eccentric stylists. She even finds herself catching feelings for the subject of her profile, dazzling young newcomer Marius Canet. Josie’s world is expanding so rapidly, she doesn’t know whether she’s flying or falling. But when a young actress lets her in on a terrible secret, the answer is clear: she’s in over her head.

One woman’s account leads to another and another. Josie wants to expose the man responsible, but she’s reluctant to speak up, unsure if this is her story to tell. What if she lets down the women who have entrusted her with their stories? What if this ends her writing career before it even begins? There are so many reasons not to go ahead, but if Josie doesn’t step up, who will?

From the author of Full Disclosure, this is a moving testament to the #MeToo movement, and all the ways women stand up for each other.

What prompted you to want to tackle the topic of abuse in the entertainment industry and why through the eyes of a young writer? What makes Josie a compelling narrator for such a heavy and widespread issue?

This is a pretty basic answer, but I’m a young writer and really wanted to explore the topic of abuse through someone like me. Josie, specifically, feels like such an unlikely narrator for this type of story. When we think of journalists in famous stories like All the President’s Men, they’re a lot older, they’re men, and they don’t seem to be afraid. I wanted to write about someone who was afraid, the last person you’d think of breaking this story.

It was also important to me that she be a Black girl. I wrote the first draft of this book before Surviving R. Kelly and On the Record were released, so it felt very much like we were discussing white women survivors and ignoring Black ones. It was important to include a Black girl and show that we also, sadly, understand these difficult topics.

What was the research process like for Off the Record? Can you share a piece of research with us that you loved learning?

Oddly, when I think about it, researching this book was a lot like researching my first book! There wasn’t nearly as much new information, but I was so interested in reading about HIV and the AIDS Crisis with the first book that I just did it in my free time.

It was the same thing here; I read all the reporting from the New Yorker and New York Times. Since I’m generally into pop culture, I think I just tended to be aware of what was going on. My favorite piece of research was reading She Said by Jodi Kantor and Megan Twohey, the journalists at the New York Times who broke the Weinstein story. Reading about the different celebrities deciding to be on the record, like Ashley Judd, really made me aware of how brave these women were to share their stories publicly.

What has surprised you most since Full Disclosure, your debut, came out in 2019?

I’m surprised so many people like it! Maybe I shouldn’t say that and project confidence. But it’s been almost two years now and people still regularly include the book as one of their favorites or tag me in Instagram posts about it. The whole journey has been so amazing.

I’m probably going to hate asking this until I no longer have to, but do you have any advice for writers releasing books during a pandemic? Have there been any challenges or unexpectedly wonderful things about Off the Record coming out this year?

It’s so weird because my first book actually came out about two months after my father passed away; I was still grieving and also going to school full-time and trying to promote a book! I think I kind of slept walk through it, and then I was at the Texas Teen Book Festival in March right before everything shut down. So I wouldn’t say my first book release was very traditional. One thing I’m definitely missing is having in-person events. I love, love, love meeting actual teens and talking about books and I also love meeting up with other authors I only know online. It’s just not the same about Zoom!

One positive is that balancing everything is a lot easier. I’m not traveling, so I don’t have to coordinate schedules with school so much, and I think I can agree to do more. I can also do events in other countries from my couch! 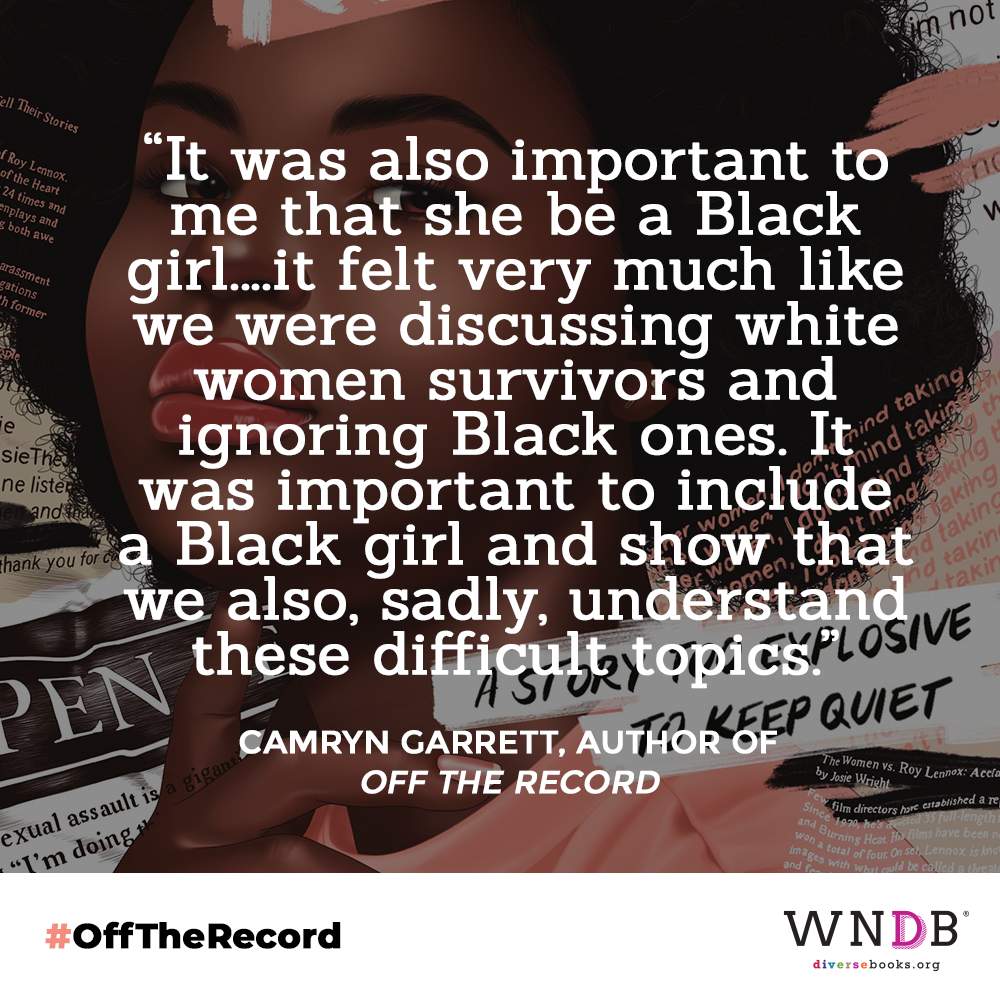 Do you consider yourself a plotter or a pantser? Did you follow that same routine for this book or surprise yourself?

Ah! Okay, I’m a certified plotter, and really enjoy planning out my books. I wrote a lot about Josie and Marius and what would happen in the plot. But I wrote an adult romance last year and pantsed the entire thing, which completely shocked me! I might try to pants my next YA now. If you’re a plotter in a rut, pantsing might be a really great way to get yourself out!

If you could be on your dream panel to promote this book, what would it be about? Who are some other authors you’d love to have on it with you?

OMG. I love panels! But I usually just go quiet and pay attention to everyone else. I’d absolutely need Jodi Kantor and Megan Twohey to be there. But as for authors, I’d need Laurie Halse Anderson to talk about Speak and Shout, Tiffany D. Jackson to talk about Grown, and Dream Hampton, who directed Surviving R. Kelly.

What other books do you think Off the Record is in conversation with? And do you have any recommendations for recently published or forthcoming YA books?

Ah, so definitely the books I mentioned above; I definitely thought about Speak as I wrote it. Tiffany D. Jackson’s Grown wasn’t out when I was writing this book, but as soon as I read it, Off the Record definitely seemed to be in conversation. I’d also say How We Get Free edited by Keeanga-Yamahtta Taylor, which is about the Combahee River Collective, Thick by Tressie McMillan Cottom, and Hood Feminism by Mikki Kendall.

As for recently published or forthcoming YA books: I totally recommend Meet Cute Diary by Emery Lee, Counting Down With You by Tashie Bhuiyan, and When We Were Infinite by Kelly Loy Gilbert! I’m super excited to read Perfectly Parvin by Olivia Abtahi, Hani and Ishu’s Guide to Fake Dating by Adiba Jaigirdar, Rise to the Sun by Leah Johnson, and Like a Love Song by Gabriela Martins!

With this book, I want people to ask me about Almost Famous!!! The only person who did is the film teacher who introduced it to me; it was a big inspiration for this book. Anyway, Almost Famous is about a teen journalist who works for Rolling Stone! And if you asked what my favorite scene is, I’d say when they’re on the tour bus singing “Tiny Dancer” because I’m very corny! 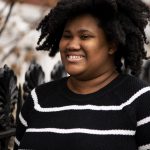 Camryn Garrett grew up in New York and began her writing career at thirteen, when she was selected as a TIME for Kids reporter, interviewing celebrities like Warren Buffett and Kristen Bell. Since then, her writing has appeared on MTV and in the Huffington Post and Rookie magazine, and she was recently selected as one of Teen Vogue‘s “21 Under 21: Girls Who Are Changing the World.” When she’s not writing, she studies film at NYU, and she’s a proud advocate for diverse stories and storytellers in any medium. Her first novel, Full Disclosure, received rave reviews from outlets such as EW, Glamour and SLJ, which said in its starred review, “Readers will fall in love.” Off the Record is her second novel.