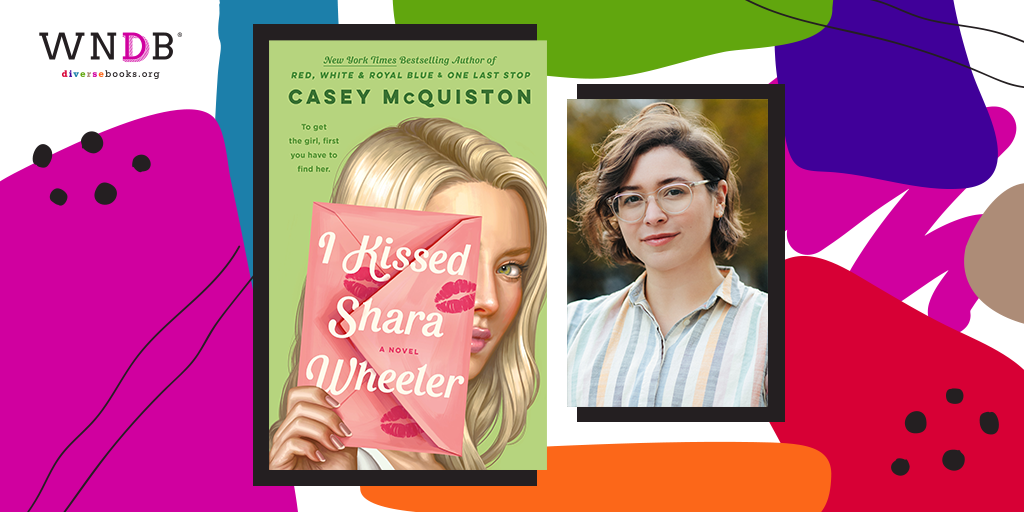 Today we’re pleased to welcome Casey McQuiston to the WNDB blog to discuss YA romantic comedy I Kissed Shara Wheeler, out May 3, 2022!

Chloe Green is so close to winning. After her moms moved her from SoCal to Alabama for high school, she’s spent the past four years dodging gossipy classmates and the puritanical administration of Willowgrove Christian Academy. The thing that’s kept her going: winning valedictorian. Her only rival: prom queen Shara Wheeler, the principal’s perfect progeny.

But a month before graduation, Shara kisses Chloe and vanishes.

On a furious hunt for answers, Chloe discovers she’s not the only one Shara kissed. There’s also Smith, Shara’s longtime quarterback sweetheart, and Rory, Shara’s bad boy neighbor with a crush. The three have nothing in common except Shara and the annoyingly cryptic notes she left behind, but together they must untangle Shara’s trail of clues and find her. It’ll be worth it, if Chloe can drag Shara back before graduation to beat her fair and square.

Thrown into an unlikely alliance, chasing a ghost through parties, break-ins, puzzles, and secrets revealed on monogrammed stationery, Chloe starts to suspect there might be more to this small town than she thought. And maybe—probably not, but maybe—more to Shara, too.

Fierce, funny, and frank, Casey McQuiston’s I Kissed Shara Wheeler is about breaking the rules, getting messy, and finding love in unexpected places. 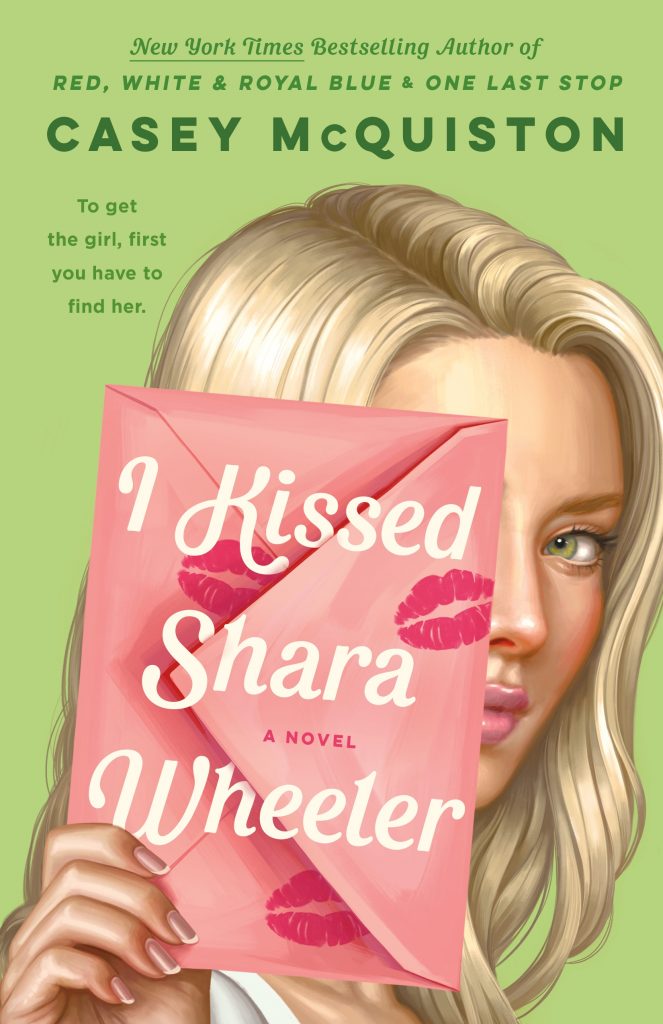 Your first two books were new adult fiction. Was the writing process for this YA debut very different from writing your previous novels?

Yes and no! I already have a lot of younger readers for my first two books, and I knew they wouldn’t appreciate it if I suddenly started talking to them differently with this book. So a lot of the humor, the prose, and the overall tone of Shara is very similar to my adult work. Teen readers can handle way more than we often give them credit for, especially when it comes to emotional complexity in a story. I never wanted them to feel talked down to. But I did want this book to feel relatable to them, so the emotional themes and parts of development I’m exploring are a bit younger. In my adult books, the question is, how does the person I’m growing into make sense with the world I’m in? In this book, the question is, what kind of person am I going to grow into?

Plus, you really can’t write teenage characters the same way you write adults. There should be more room for them to be messy and get things wrong, because that’s what being a teenager is. They don’t need to have things figured out, or even be anywhere close. So the characters in this book do often make mistakes and do things that adult characters may not be able to get away with, and I love that about it. I wanted to leave room for teens to be teens to the fullest.

Chloe is defined as “angry” and “not nice” quite a few times in the book. What compelled you to write such an atypical main character?

I feel like I’m always drawn to POV characters who are intense in one way or another—the ones who are probably too much for a lot of people they meet, who feel like outsiders. I just find that genre of character so interesting, and there’s so much to dig into there, especially with a teenage protagonist. I’d never want to write a YA main character who feels like the super cool, infallible kid I wish I had been, with all of the things I’ve learned as an adult grafted onto her. That’s not what any of us adult writers were like back then! A lot of us were probably at least a little annoying! And that’s okay! Teenagers are in a pressure cooker of every feeling and every hormone and every weird growth sport and adolescent milestone you can imagine all of the time. They’re allowed to sometimes be annoying or dramatic. So I wanted to give Chloe the space and the empathy to be all of those things.

Chloe’s ever-expanding group of friends is very diverse. How did you go about fleshing them out?

I thought a lot about what the student body was like at my own religious Southern high school, and then I tried to extrapolate what a fictional version might be like in 2022, with those kids having exposure and access to way more outside information than we had back then. It made sense for this school to break down demographically the way that it does, but it also wouldn’t have made sense for a big group of Gen Z kids to be 100% bought into the culture there. Even back when I was a teen in the mid-00s, I remember many of us closeted queer kids simmering under the surface and gravitating to the classmates we knew were like us on some level. In this story, there are just more of those kids, because more of them are aware of the options that exist for them outside of their school. Once I understood that about the student body, it was easy to see the pockets of each clique where you’d find the queer kids. From there, it was about taking the time to make each of those characters memorable and special in their own ways, from their family lives to their secret passions to all their teenage joys and insecurities.

Queerness and Christianity are interwoven in this book, and they affect characters differently. Why was it important to show such varying experiences with these aspects of identity?

Because of my own experiences coming of age in a conservative religious environment, I wanted to explore what that’s like for teens and how it can be damaging. But I also never wanted a queer teen who is also a believer to feel alienated by this book, or to feel like they had to choose between their faith and their religion in order to be fully accepted—after all, they may already be hearing that at church, so I didn’t want them to read it in a book, too. For other readers, faith can be a big part of queer identity. I wanted to write a story that balanced an honest conversation about religious trauma with the idea that faith isn’t inherently harmful.

There is a particular moment in the book where one character is asked to explain “the whole nonbinary thing,” as the interlocutor puts it. What compelled you to include such a candid discussion of this specific identity?

It’s something that’s very personal to me, and something that a lot of people still don’t seem to understand, both outside and inside the queer community. I knew there would probably be people who pick this book up who have some gender-y inklings but don’t yet know how to identify them, so once I knew one of my central characters was going to experience some gender exploration in his story, I decided to let him have a scene where he gets to learn about it. He’s a Southern football player, and I felt like, even in 2022, it might be a stretch for a reader to believe that every character in this world would just automatically have all the right vocabulary for everything. So, in this scene, he gets to learn something about himself, and the reader gets to think about something they may not have thought about before. 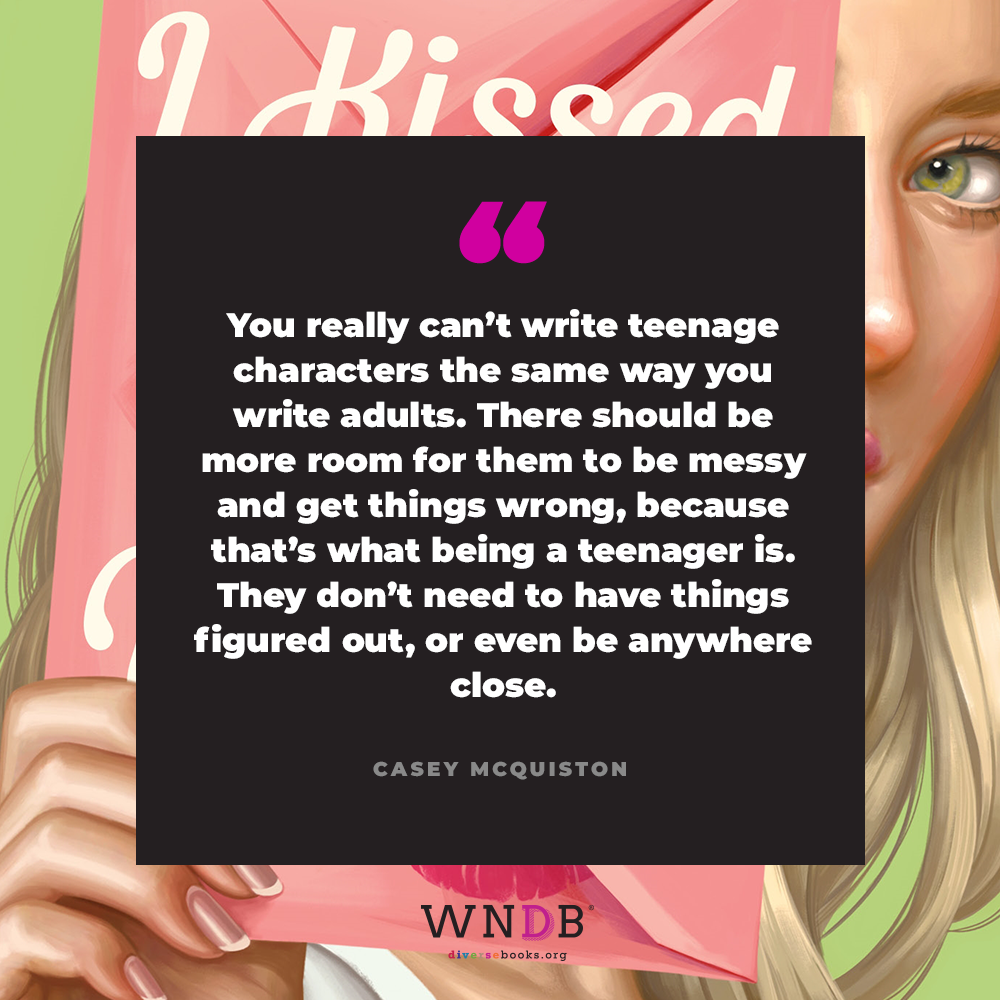 Shara’s character is a central part of the story, yet she is barely in it. Was that a challenge when it came to developing her character?

While she may not be physically present for a large part of the book, I worked really hard to make the reader feel her presence on every page, because Chloe feels her presence every day of her life. Shara is everywhere, all the time—in the gossip at school, in the formative high school experiences of the main characters, in her clues and puzzles and all of the evident design behind them. She pops up at random moments in imagery or memories or even just the setting in which a scene happens. I wanted it to feel like she’s touched everything we’re seeing, because she’s woven into the fabric of Willowgrove. The hardest part of that was striking a balance between making her overwhelming presence known and still keeping her an unattainable enigma that the reader (and the characters) wants to unravel. So I’d say that was the challenge: crafting a character who’s everywhere and nowhere at the same time.

What was the process of plotting Shara’s mystery like?

It was one of the hardest parts of the book! I knew she would have a long list of secrets, but it took a while to know the character well enough to figure out what they were. How serious should they be? Why is she keeping them? What do they reveal about her? Why is she sharing them? The answers to all of those questions changed a lot in the early outlines, until I landed with what we have now.

You decided to include some well-loved tropes in the novel. What do you think are the benefits of using them?

Tropes can be an incredibly useful tool in getting a reader invested with unfamiliar characters from page one. Maybe a reader doesn’t care about Chloe yet, but they do care about other characters they’ve encountered in the past who fit into the trope of “intense try-hard valedictorian.” So that barrier of entry drops much faster. Tropes exist because they identify patterns of things we love to see in fiction, so to me it makes perfect sense to let them light the path.

When it comes to queer fiction, specifically, I always find it fun to subvert and play with those tropes in a queer context. Maybe we’ve seen the Breakfast Club-style collage of dissonant high school archetypes before, but how many time have to seen it done where the princess is harboring secret gay feelings, or friction between the jock and the rebel is mostly unresolved romantic tension? To me, it’s a way to pay homage to the media that inspired me when I was younger and make it fresh for a new generation of young readers. And honestly, I think every reboot or retelling would be better if it was gayer.

Do you have any book recommendations for readers who enjoyed I Kissed Shara Wheeler?

Casey McQuiston is the New York Times bestselling author of One Last Stop, Red, White, & Royal Blue, and I Kissed Shara Wheeler, as well as a pie enthusiast. Born and raised in southern Louisiana, Casey now lives in New York City with Pepper, a poodle mix and semipro personal assistant.

Maria Mayor is an English Studies graduate from Spain. She’s passionate about language learning and literature and especially devoted to finding every book with good LGBT+ representation. She has completed various courses on different aspects of the publishing industry and is currently in the process of getting her master’s degree on Library and Information Science. You can find her at her blog called The Character Study, where she talks about all things books.

Previous Post: « Q&A With Kelly Yang, Yes We Will
Next Post: Q&A With Minh Lê & Dan Santat, The Blur »
Save the date for the #WalterAwards23! You can now