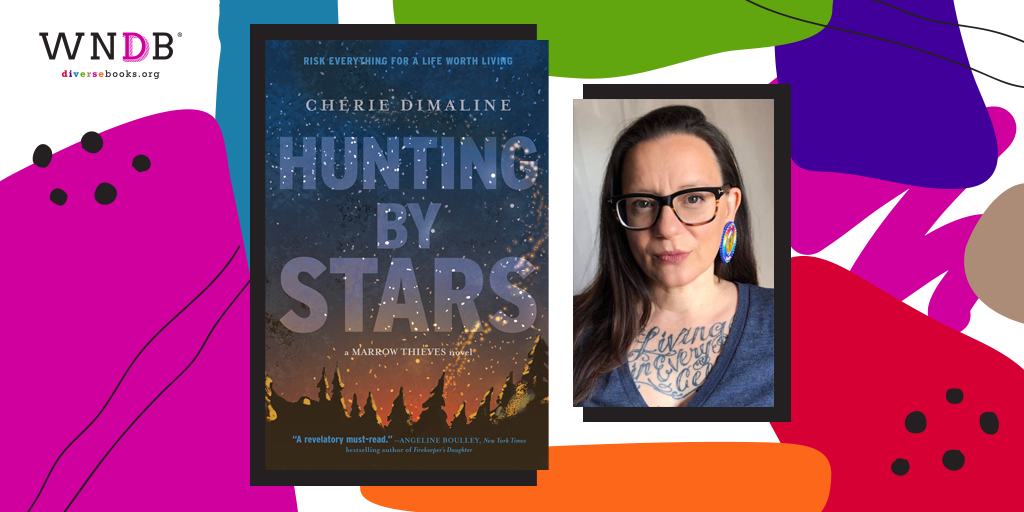 Today we’re delighted to welcome Cherie Dimaline to the WNDB blog to discuss Hunting By Stars, out now!

Years ago, when plagues and natural disasters killed millions of people, much of the world stopped dreaming. Without dreams, people are haunted, sick, mad, unable to rebuild. The government soon finds that the Indigenous people of North America have retained their dreams, an ability rumored to be housed in the very marrow of their bones. Soon, residential schools pop up—or are re-opened—across the land to bring in the dreamers and harvest their dreams.

Seventeen-year-old French lost his family to these schools and has spent the years since heading north with his new found family: a group of other dreamers, who, like him, are trying to build and thrive as a community. But then French wakes up in a pitch-black room, locked in and alone for the first time in years, and he knows immediately where he is—and what it will take to escape.

Meanwhile, out in the world, his found family searches for him and dodges new dangers—school Recruiters, a blood cult, even the land itself. When their paths finally collide, French must decide how far he is willing to go—and how many loved ones is he willing to betray—in order to survive. This engrossing, action-packed, deftly-drawn novel expands on the world of Cherie Dimaline’s award-winning The Marrow Thieves, and it will haunt readers long after they’ve turned the final page. 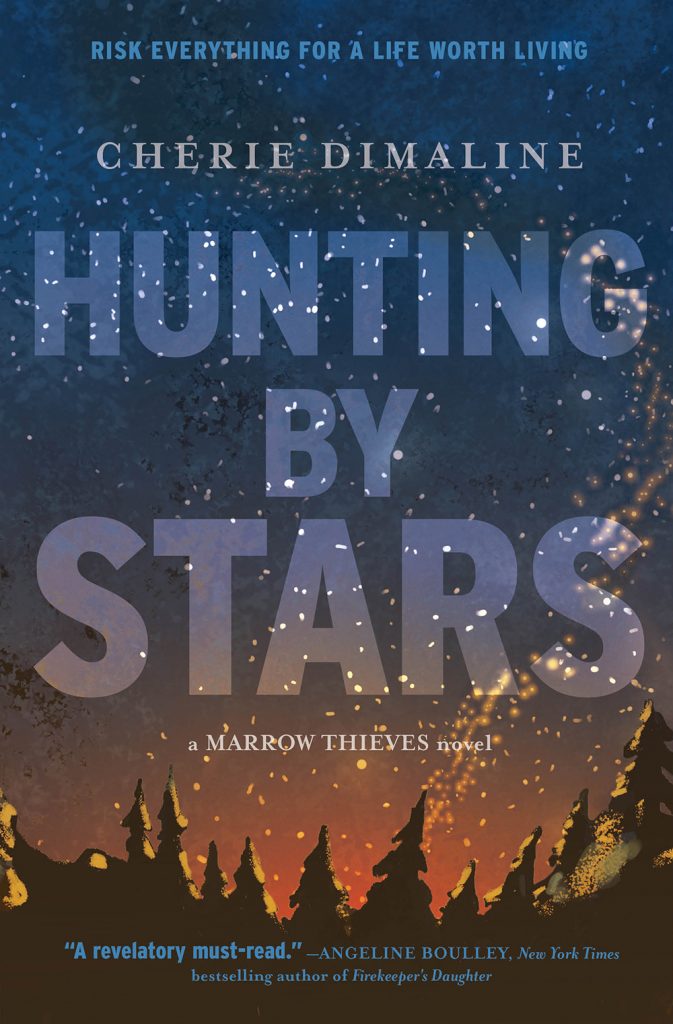 Hunting By Stars is the follow-up to your young adult debut, The Marrow Thieves. What was it like to be back in this dystopian world and with these characters? Did you always know you’d be coming back?

I did not know I would be writing a sequel. In fact, I had planned not to. I thought I had told the story that needed to be told and built the characters to carry it and that was that. But the readers asked for more and that in and of itself is a huge deal for a writer. I also realized that the reason  I was okay with walking away after the first book was because those characters—Frenchie, Rose, Chi Boy, Miig… they lived on in my own personal imagination, so I still had them. And so, the readers who so loved them deserved to also have them. That’s basically a fancy way of saying I caved to peer pressure. Thousands of readers asked—among them the Indigenous readers I had originally written the book for—and I went back in.

In an interview with Quill and Quire, you said, “Because it’s YA, it’s talking to future leaders who will sit in front of things like the Indian Act, pipelines, traditional territories.” What do you make of this responsibility to talk to future leaders both Indigenous and non-Indigenous through young adult fiction?

It’s a heavy responsibility that any YA writer takes on, or should take on. Your work, if you do it right, is handed to young people by teachers, librarians, parents, friends, and  loved ones. That’s a lot of trust, to be a part of a young person’s life. The books we read in our early years can shape our thoughts, show us the limitlessness or boundaries of the world, give us the words to ask for what we want and the context to ask for the things that can make us better. I want to always use that huge opportunity to talk about the topics that I, in my singular and specific opinion, can help the communities I care deeply about.

Even though the world in The Marrow Thieves and Hunting By Stars is dystopian, there’s a deep sense of hope. How do you find that hope in such a tough story?

The world can be tough, can be brutal, can be cruel, but as long as you have community in it, there is always hope. I think that’s true of real life as much as dystopian fiction. Growing up in my community we had each other – good food, music, gatherings, laughter, so I never knew the things we didn’t have, which as it turns out, was quite a lot. 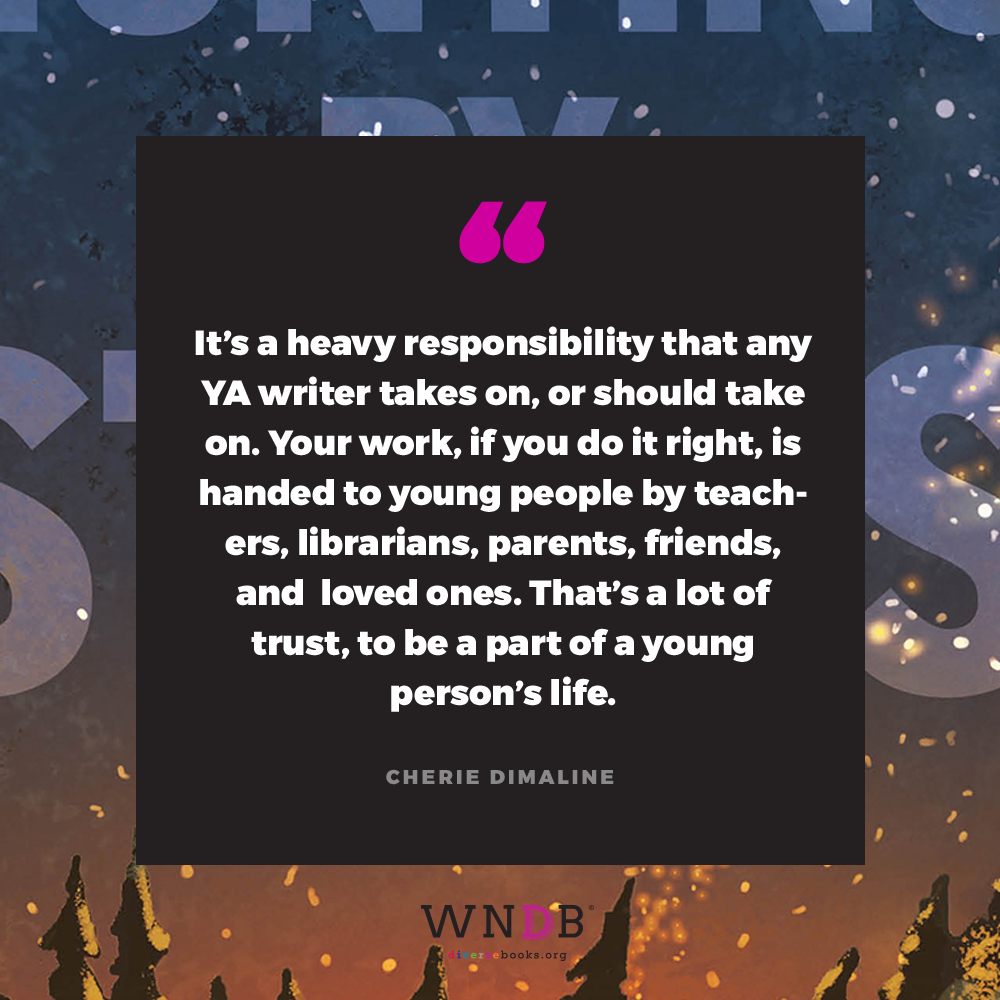 What’s something that you learned about Frenchie and the rest of the family in Hunting By Stars that you didn’t know in The Marrow Thieves?

The reason I was able to write Hunting By Stars was because these characters proved to be incredibly adept at surviving, at hanging on, at loving each other beyond all reason and sense. Hunting By Stars is faster paced, more dangerous, filled with new terrors and so many impossible decisions and turns. And I could do it because they could do it. And the hundreds of thousands of readers who loved them no matter what? I knew that with these readers, the characters were in good hands with good hearts; people who were ready to walk—and run—alongside them.

Who are some of your favorite Indigenous authors?

Oh no, there are so many and I love them all! There are brilliant new Indigenous voices coming out all the time—Billy-Rae Belcourt, Helen Knott, Arielle Twist. And so many of the original published voices are still working for all of us—Lee Maracle, Louise Erdrich, Maria Campbell. Not to mention these geniuses— Katherena Vermette, David Robertson, Eden Robinson, Waubgeshig Rice, Tanya Talaga, Tanya Tagaq, Richard Van Camp…. I could literally go on for pages. What a time to be alive and reading.

What do you hope young readers take away from Frenchie’s continued story? 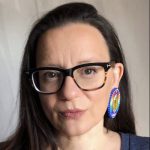 Cherie Dimaline‘s young adult novel The Marrow Thieves shot to the top of the bestseller lists when it was published in 2017, and has stayed there. It won the Burt Award for First Nations, Métis and Inuit Literature, the Governor General’s Literary Award, the Kirkus Prize in Young Readers’ Literature, was a finalist for the Trillium Book Award and was a fan favourite in CBC’s Canada Reads (2018). It was also a Book of Year on numerous lists including National Public Radio, the School Library Journal, the New York Public Library, Globe and Mail, Quill & Quire and the CBC. Her adult novel, Empire of Wild, was an Indigo #1 Best Book of 2019. From the Georgian Bay Métis Community in Ontario, she lives in Midland, Ontario.

Previous Post: « Cover Reveal for Finding Jupiter by Kelis Rowe
Next Post: Q&A With Roseanne A. Brown, A Psalm of Storms and Silence »
Applications are open for Literary Agents of Chang