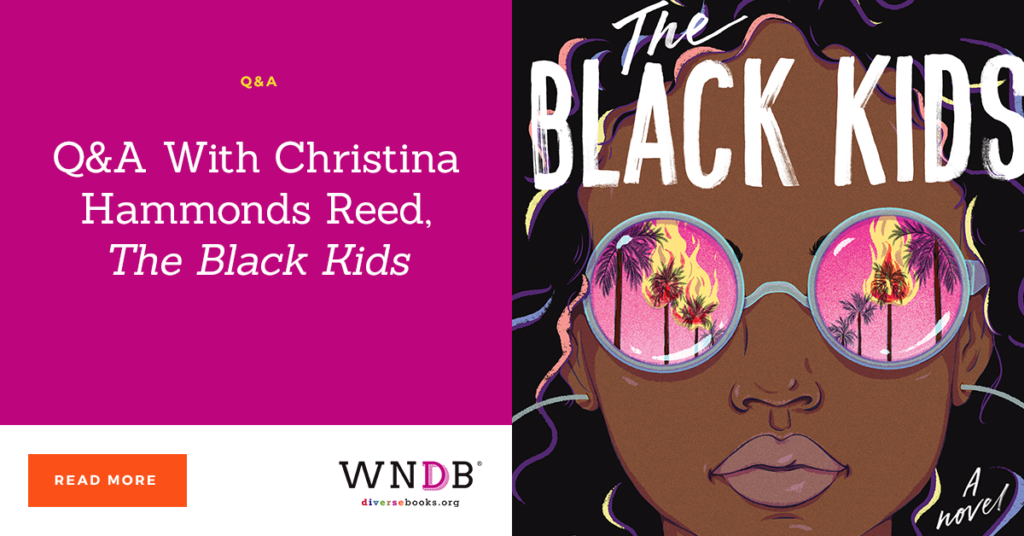 Today we’re pleased to welcome Christina Hammonds Reed to the WNDB blog to discuss her YA novel The Black Kids, out August 4, 2020! 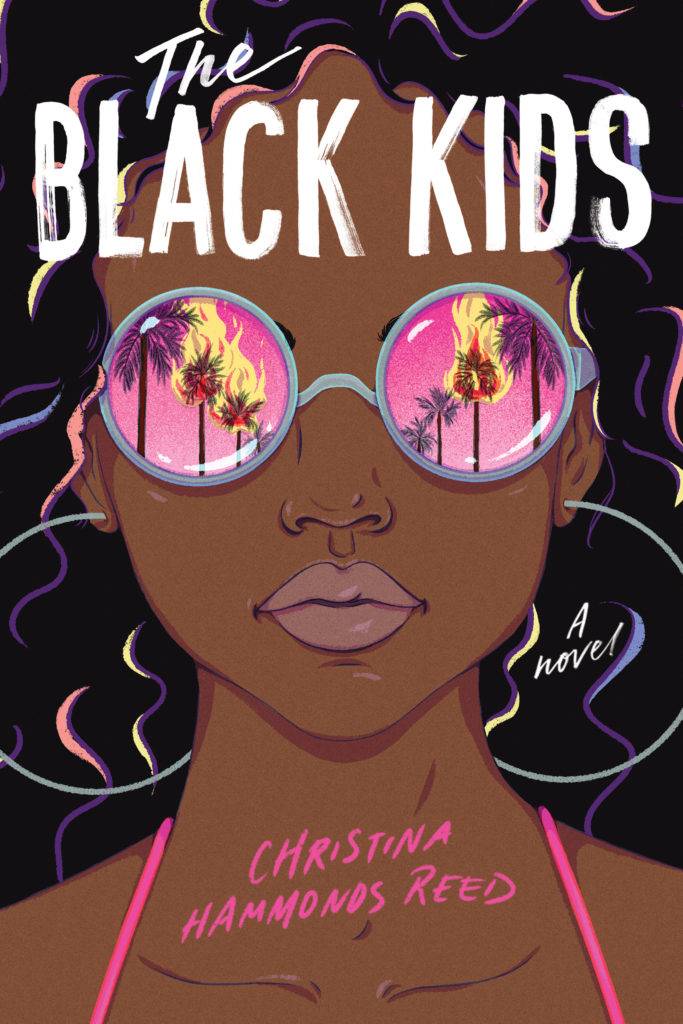 Perfect for fans of The Hate U Give, this unforgettable coming-of-age debut novel explores issues of race, class, and violence through the eyes of a wealthy black teenager whose family gets caught in the vortex of the 1992 Rodney King Riots.

Ashley Bennett and her friends are living the charmed life. It’s the end of senior year and they’re spending more time at the beach than in the classroom. They can already feel the sunny days and endless possibilities of summer.

Everything changes one afternoon in April, when four LAPD officers are acquitted after beating a black man named Rodney King half to death. Suddenly, Ashley’s not just one of the girls. She’s one of the black kids.

As violent protests engulf LA and the city burns, Ashley tries to continue on as if life were normal. Even as her self-destructive sister gets dangerously involved in the riots. Even as the model black family façade her wealthy and prominent parents have built starts to crumble. Even as her best friends help spread a rumor that could completely derail the future of her classmate and fellow black kid, LaShawn Johnson.

With her world splintering around her, Ashley, along with the rest of LA, is left to question who is the us? And who is the them?

It’s kind of wild to think that 1992 is considered historical fiction. What was it like writing about the ’90s with this perspective in mind? What kind of research did you have to do for this story?

It’s funny I didn’t even think of the ’90s as “historical” fiction until other people mentioned it. I suppose the ’90s for me is very steeped in the nostalgia of youth and youthful discovery. I was eight years old when the riots happened and at that age, everything is so new. You’re soaking up music, television, and images like a sponge, but without the context that comes with being older and understanding more about the political and cultural forces at work all around you.

To that end, I really had to immerse myself in newspaper articles and documentaries about the events leading up to and including the riots, but I also had to immerse and reacquaint myself with the music, fashion, and television of the era through YouTube videos, magazine articles, etc. I really leaned on a compilation by the LA Times Understanding the Riots and the brilliant play Twilight: Los Angeles, 1992 by Anna Deavere Smith. Also, the beauty of writing about a city I currently live in is that everyone you talk to who was alive and here then has these very vivid memories and so many people were eager to share them with me when I mentioned, even off-handedly, that I was working on the book.

The cover of The Black Kids is powerful end evocative. What was the process of creating the cover like?

I have to give all the credit to Adriana Bellet for her incredible illustration and to Lucy Ruth Cummins for her next-level cover design. In the early stages, I was shown a few options for images for the cover, but I was instantly struck by the idea of the sunglasses and by Adriana’s work. Even so, I was not even a little bit ready for when they showed me how it came together! It’s so wonderfully representative of Ashley’s character arc. She’s foregrounded with the riots reflecting in her sunglasses. It seems simple at first, like it’s just a cool image, but her journey is one of her feeling some degree of distance from the impact of the riots and her own Blackness, to taking off those metaphorical sunglasses and really seeing the world around her for the first time in a major way and discovering the power of being part of a larger community. We tweaked a few things including how much fire was in the palm trees, and what kind of earrings she had on, and a little bit about her hair highlights, if I recall. But I couldn’t have asked for a better cover.

Ashley and her friends’ and community’s experience with police brutality, racism, and anti-Blackness is a universal one, but it’s also specific to Los Angeles in the way this was handled in LA and how racism and anti-Blackness exist in LA. How did you draw out those community-specific emotions and realities? Why did you choose to write about the Rodney King riots and not a fictionalized account of police brutality, or one set in a fictional town?

I really consider this book a love letter to Los Angeles as much as anything. The images of Los Angeles are so reductive—it’s either presented as this super glamorous vapid place, or we have these portrayals of East and South LA that really don’t take into account all the various types of people who live and thrive there. Portrayals that simplify what are very complicated socioeconomic and cultural dynamics.

As much as I love this city, I wanted to write a narrative that encompassed everything, the beauty and the pain. And specifically the beauty and the pain of the black experience in Los Angeles. Los Angeles was largely founded by Afro-Latinx and mestizo people (and we should also mention and honor the Tongva natives from whom this land was taken). The Venice canals and boardwalk, one of our most famous cultural landmarks, was built by Black labor, even as the beachfront property purposefully excluded, and generally continues to exclude Black people. Santa Monica had a thriving, if segregated, Black beach community. There was a race riot resulting from Black children trying to play on the merry-go-round at Griffith Park in the 60s. Black people have always been part of the landscape of this city, both the glamorous and not so glamorous parts, and anti-Black racism has always been part of the landscape of this city. And the LAPD under the direction of longtime Chief William H. Parker was rather explicitly racist. That legacy didn’t just magically disappear over the decades. The 1992 riots, while they echo the concerns of the Watts riots, are really when we see the city being forced to reckon with this in a major way.

This is just as much a coming-of-age story for Ashley, about figuring out who you are and the joy, pride, and celebration of being Black. What did you love most about writing her journey? Where do you want readers to envision her after the events of this book?

I love that Ashley is a super flawed character. So many portrayals of Black woman protagonists across mediums really portray us as strong, powerful, and self-assured. It reduces our humanity and is actually super detrimental in a lot of ways. We can be and many of us are delicate, soft, uncertain of ourselves, emotionally fragile. The resilience that we’ve had to have to survive in this country doesn’t equal innate physical or emotional strength. I wanted a character who was all those things.

Also, I wanted to examine a Black girl who was still just figuring out how to be, how to be a good sister, daughter, friend, how to be a Black person in a world that often denigrates and devalues blackness, but also just how to be good. In the course of the book, she falls in love with her Blackness, but also comes into some degree of her own power and learning how to use her voice. I think after the book she’s kinder, more thoughtful, more empathetic, more comfortable in her own skin, and less afraid.

So because I think Ashley’s story is one of growing to love herself and specifically her Blackness, I think the picture books Matthew A. Cherry’s Hair Love, Jacqueline Woodson’s book The Day You Begin, and I Am Enough by Grace Byers are a good starting point for exploring that with small children. I think Brandy Colbert’s middle-grade novel The Only Black Girls in Town explores similar dynamics of how being one of few Black people in an area can impact the sense of self, but also deals with family history, secrets and how they impact identity and the self.

In the YA sphere, I think we have so many incredible, important works that are looking at Black identity and the impact of unequal policing in this country. The most obvious comparisons have been made between The Hate U Give, Dear Martin, and The Black Kids, but to a certain extent, I think that does a disservice to all of us as authors. As much as I’m deeply honored by the comparisons, and as much as I admire the hell out of Nic and Angie, I do genuinely think it can be reductive to compare our works just because they are books that explore the teenage Black experience and the impact of police brutality. Many, if not most, of us who move through the world as Black people will have experiences with unequal policing at some point in our lives. My hope is that there are more and more stories at the table so that our books are not seen as only in conversation with each other, but part of a larger discussion of and celebration of Blackness, as well as stories that are not thought of as somehow separate from the overall teenage American experience.

As far as coming-of-age stories go, I actually really love The Perks of Being a Wallflower and think The Black Kids owes a bit of a debt to that book in terms of how it deals with a flawed protagonist who is genuinely trying to figure out how to be as a person, as well as dealing with mental health and past family trauma and how it impacts the present.

I wish more people would ask about Tulsa Race Riots, Ashley’s family history, and mental health as explored in both her sister Josephine and her grandmother. It was important to me to explore trauma and memory and forgetting. It was also important to me to explore, as I said earlier, Black womanhood that isn’t innately strong. To look at how that Black resilience that we celebrate often masks the deep effects of intergenerational racial trauma, and how one’s mental health can be so impacted not just by your own brain chemistry but also by the occasionally unbearable weight of what it has meant and means to be Black in this country. 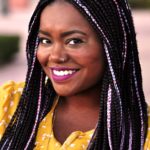 Christina Hammonds Reed holds an MFA from the University of Southern California’s School of Cinematic Arts. A native of the Los Angeles area, her work has previously appeared in the Santa Monica Review and One Teen Story. The Black Kids is her first novel.

Alaina Leary (Lavoie) is the communications manager of We Need Diverse Books. She also teaches in the graduate department of Writing, Literature, and Publishing at Emerson College and is a book reviewer for Booklist. She received a 2017 Bookbuilders of Boston scholarship for her work in the publishing industry. Her writing has been published in New York Times, Teen Vogue, Cosmopolitan, Refinery29, Allure, Healthline, Glamour, The Oprah Magazine, and more. She currently lives in Boston with her wife and their two literary cats. Follow her @AlainasKeys on Instagram and Twitter.