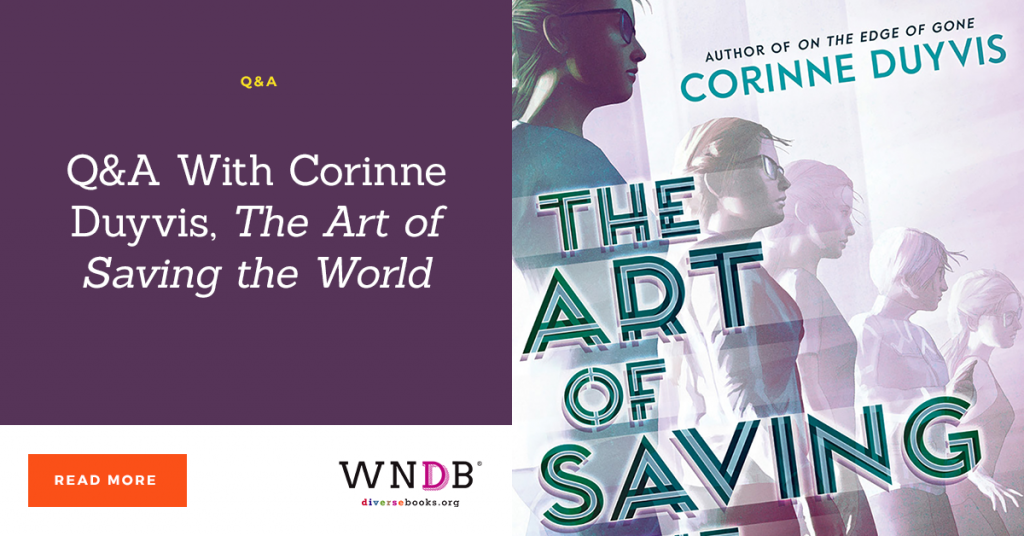 Today we’re pleased to welcome Corinne Duyvis to the WNDB blog to discuss her YA novel The Art of Saving the World, out September 15, 2020! 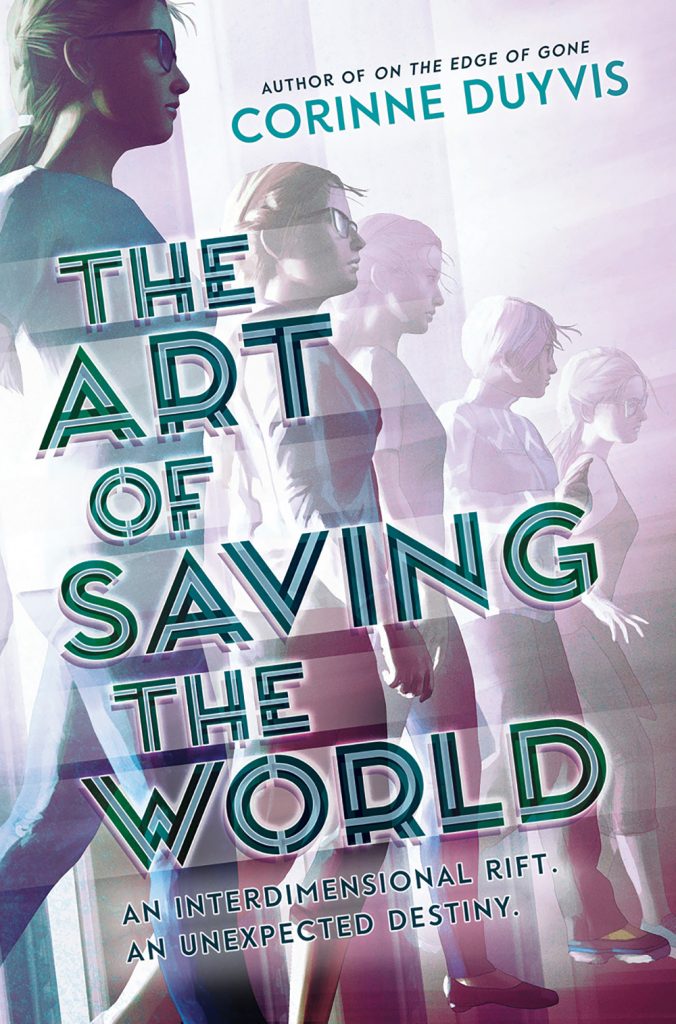 When Hazel Stanczak was born, an interdimensional rift tore open near her family’s home, which prompted immediate government attention. They soon learned that if Hazel strayed too far, the rift would become volatile and fling things from other dimensions onto their front lawn—or it could swallow up their whole town. As a result, Hazel has never left her small Pennsylvania town, and the government agents garrisoned on her lawn make sure it stays that way. On her sixteenth birthday, though, the rift spins completely out of control. Hazel comes face-to-face with a surprise: a second Hazel. Then another. And another. Three other Hazels from three different dimensions! Now, for the first time, Hazel has to step into the world to learn about her connection to the rift—and how to close it. But is Hazel—even more than one of her—really capable of saving the world?

In The Art of Saving the World, Hazel comes face-to-face with her doppelgangers, Hazels from other dimensions, when an interdimensional rift opens on her sixteenth birthday. How did you decide on the names, backstories, and intricacies of each Hazel? Were there aspects of this-world Hazel’s life that you wanted to reflect or challenge?

When creating the other Hazels, I kept in mind the insecurities and conflicts that this world’s Hazel —Hazel Prime—struggles with. For example, having her meet an AU (alternate-universe) version of herself that prefers dogs over cats doesn’t challenge her much. However, having her meet an AU version of herself with a double-Venus-symbol necklace and bright rainbow hair, when Hazel Prime is extremely uncertain about her romantic and sexual orientation, forces Hazel Prime to grapple with those questions to an extent she hasn’t had to before.

As for her backstory, I simply considered: What minor changes to her history could I introduce that would nudge Hazel Prime to turn into this other Hazel, instead?

I took similar approaches for each AU Hazel, thinking of ways I wanted them to differ, what impact they would have on Prime, and how their different pasts might’ve led them to who they are now.

This book very boldly starts off by launching Hazel right into the thick of the action and literally calling her a “Chosen One.” Why did you decide to play right into this trope and, without giving spoilers, what are some ways you subverted the trope in your writing?

The thing about Chosen Ones is that “Chosen” implies that someone is out there doing the Choosing. That notion alone raises so many questions that, when reading or watching these stories, I’ve regularly found myself distracted to the point where it takes me out of the story. It always made me wonder “how?” and “why?” and “who?” More and more, it also made me wonder: “What if?”

It’s the perfect jumping-off point for an exploration and subversion of the Chosen-One concept, and in this particular case, that required full-on embracing it in all its tropeyness: The Powers That Be, a supernatural destiny, an assigned mentor, a magical weapon that only the Chosen One can use, and more. Including all this in the first few chapters left me with plenty of space to play with the idea in the rest of the book.

Discussing the ways I subverted the trope without delving into spoilers is a tricky question. I suppose one thing Chosen Ones always wonder is: “Why me?” Hazel is no exception to this. Eventually, she gets her answer…It’s just not necessarily an answer she likes.

How did you keep all the dimensions—and Hazels and their lives—organized while writing? Did you have a specific process for keeping track?

Some of their traits were set in stone from the start. While brainstorming, I kept a list with short character bios. As I wrote the book, the characters evolved; I updated the lists accordingly.

Given their differences and different names, it was easy to end up writing the Hazels as wholly different characters, rather than versions of the same character. At one point, I decided to write down a lot of Hazel Prime’s character traits. I took highlighters in various colors and assigned each version of Hazel a different color. I proceeded to highlight the traits that fit them all best. That ended up helping me a lot in making sure that while they all represented different facets of Hazel, they were, at their core, still Hazel.

Did you do any research for this book? I’d be fascinated to know if you learned anything about interdimensional rifts or theories about alternate universes or our alternate selves.

As the book features alternate universes, interdimensional rifts, and government researchers, it definitely has strong sci-fi elements—however, I personally always saw The Art of Saving the World as a fantasy. After all, the Chosen-One aspect and presence of a dragon are pretty major elements, too, and the book is in explicit conversation with fantasy tropes. I feared leaning into the sci-fi angle more than I was already doing would detract from that, so I actively decided against doing too much research. I knew I would end up fascinated with whatever I found and would want to incorporate all of it, haha!

Although a lot of this book is driven by sci-fi action and plot, it’s also a very deeply personal book about questioning who you are, figuring out your identity and sexuality, and deciding who you want to be. Did you intend to do this when you set out to write a book with AU dopplegangers? In many ways, an AU version of ourselves is the best ways to look at who we are and who we could be directly. How did you write that into Hazel’s journey?

Sci-fi and fantasy can be fantastic vehicles for exploring these very real conflicts. I did the same thing in my second novel, On the Edge of Gone, in which I use the story of an apocalypse and generation ship to explore the devaluing of disabled lives. It’s one of the things I love about the genre.

For The Art of Saving the World, I absolutely set out with similar aspirations.

For a girl who’s insecure about her appearance, what would it be like to see herself—especially the parts she dislikes, from her teeth to her height—from an outside perspective?

For a girl who’s self-conscious about how people perceive her, would she be just as laser-focused on these other Hazels’ flaws? How they laugh, how they bite their lip, how they hesitate before speaking?

For a girl who’s unsure about her orientation, what would it be like to see a version who’s absolutely confident about who she is and isn’t attracted to, and who’s embraced this identity wholeheartedly?

And for a girl who feels she’s worthless, what would it be like to realize—bit by bit —how much she’s beginning to admire these other versions of herself?

What better way to tackle issues of identity, self-love, and insecurity, than through coming face-to-face with yourself?

While there’s a lot I loved about writing The Art of Saving the World, this element is unquestionably the heart of the book.

What was the inspiration behind Neven, the dragon?

I’ve always been intrigued by the mentor figure in Chosen-One stories, and this book gave me the perfect opportunity to both play with the trope (someone who’s been to so many worlds and trained so many Chosen Ones has to get pretty blasé about the whole process) and dig into it from a character perspective: How did Neven land this task? How does she truly feel about it? Has she ever seen Chosen Ones fail?

Neven is one of those characters who arrived fully formed, and I had an awful lot of fun with her.

Are you a plotter or a panster? Did that change with this book or did you stick to your usual writing methods?

I’m 90 percent a plotter, 10 percent a pantser. While I always plot my novels out beforehand—I have to know how a book ends before I start it!—my outline changes as I’m writing it. I can’t write without an idea of what comes next, but that idea isn’t set in stone. I’m perfectly happy to adjust as I go.

Of all my books to date, The Art of Saving the World has changed the most from start to finish. The third act as I planned it in my original outline had very little resemblance to the third act as I ended up drafting it. In revisions, I ended up gutting the second half—deleting over 80,000 words—as well as cutting and rewriting large chunks of the rest of the book.

Despite having clear evidence that outlining in no way stops me from needing to do so much work in revisions … I somehow keep doing it.

What other books do you think Art is in conversation with? Do you have any recommendations for published or forthcoming books?

The first thing that jumps to mind right now is not a book, but a TV series: The new She-Ra cartoon. It’s fabulously queer, full of fantasy/sci-fi goodness, and it engages with the Chosen-One trope in ways that are occasionally very similar to The Art of Saving the World. It’s certainly made me daydream about a cartoon adaptation, haha!

As for recommendations, I just finished Elatsoe by Darcie Little Badger, which is both incredibly fun and incredibly intriguing. A murder mystery, a magic-infused alternate America, a ghost dog, Rovina Cai’s wonderful illustrations—what a fantastic combination!!

What question do you wish you were asked more often (and why)?

My books have been translated into a handful of languages—Dutch, Turkish, Spanish, and Russian—and it’s always so exciting, from seeing the new cover for the first time to knowing that you’re reaching a whole new audience. I would love to sell more translation rights.

For that matter, only one of my books has been adapted to both audio and large print (On the Edge of Gone); another (Guardians of the Galaxy: Collect them All) had an audiobook that’s unfortunately no longer available due to rights issues.

There are a lot of reasons it’s cool to sell secondary rights and see your books in different formats, but I’m particularly invested in the accessibility angle. I very much hope more of my books get the audio treatment. 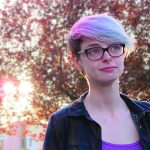 Corinne Duyvis is the critically acclaimed author of the YA sci-fi/fantasy novels Otherbound, which Kirkus called “a stunning debut;” On the Edge of Gone, which Publishers Weekly called “a riveting apocalyptic thriller with substantial depth;” and The Art of Saving the World, which Kirkus called “impossible to put down.” She is also the author of the original Marvel prose novel Guardians of the Galaxy: Collect Them All. Corinne hails from the Netherlands. She’s a co-founder and editor of Disability in Kidlit as well as the originator of the #ownvoices hashtag.

Previous Post: « Q&A With Mark Oshiro, Each of Us a Desert
Next Post: The Disappearance of the Black Muslim Author »
Applications are open for Literary Agents of Chang