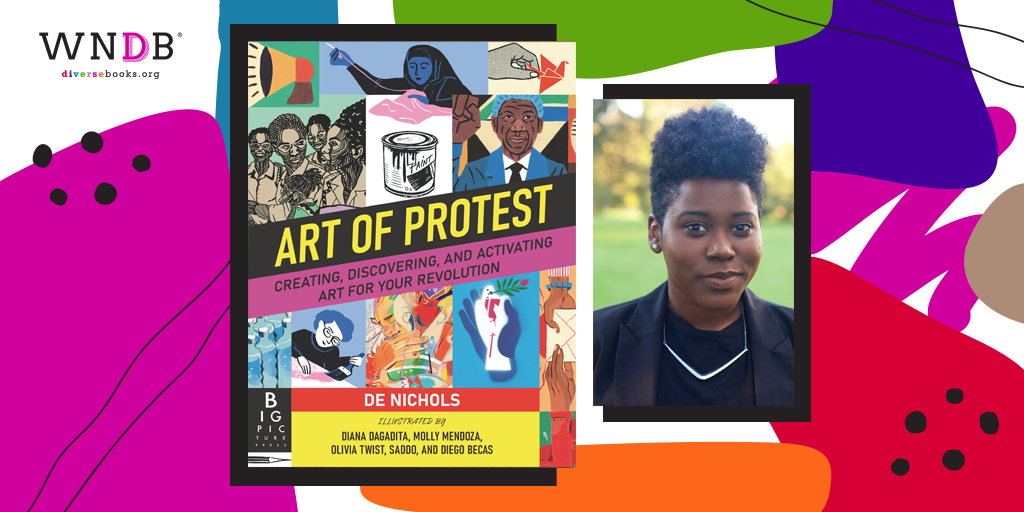 Today we’re thrilled to welcome De Nichols to the WNDB Blog to discuss Art of Protest: Creating, Discovering, and Activating Art for Your Revolution, out November 11, 2021!

From Keith Haring to Extinction Rebellion, the civil rights movement to Black Lives Matter, what does a revolution look like? Discover the power of words and images in this thought-provoking look at protest art by highly acclaimed artivist De Nichols.

From the psychedelic typography used in “Make Love Not War” posters of the ’60s to the solitary raised fist, some of the most memorable and striking protest artwork from across the world and throughout history deserves a long, hard look. Readers can explore each piece of art to understand how color, symbolism, technique, and typography play an important role in communication. Guided by activist, lecturer, and speaker De Nichols’s powerful narrative and stunningly illustrated by a collaboration of young artists, this volume also has plenty of tips and ideas for creating your own revolutionary designs. This is a fully comprehensive look at the art of protest. 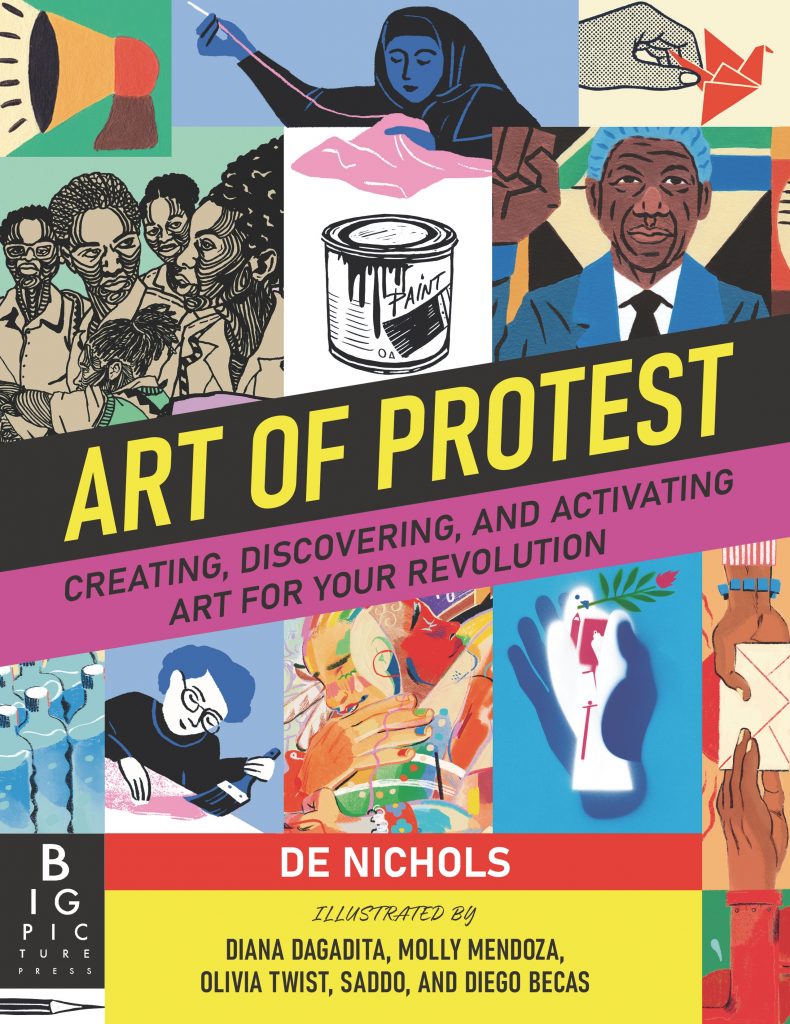 Congratulations on your upcoming book, Art of Protest. Could you please us a little about yourself?

Hey! I’m De Nichols, and I am an artivist. In my professional life, I am a researcher at YouTube who’s focused on racial justice, equity, and inclusion. In my public life, I co-organize the national Design as Protest collective. And, in my personal creative life, my arts and design studio practice works with communities to address civic issues and injustices through creative interventions, actions, and artworks. Since I was a kid, I have lived my life at the intersection of art and activism, and I’m excited that Art of Protest welcomes and ushers more young people to discover their visual voice in this way as well.

What is Art of Protest about, and where did the idea for this project came from?

Art of Protest is the culmination of a series of moments in my life that have inspired me to see the power of the arts to shift minds, defend freedoms, and mobilize community.

As an artist, what inspired you to get into activism? Who are some of your personal sources of inspiration, both political and artistic?

I was always service-driven in my youth, so taking action in solidarity with others was nurtured. However, this transformed to activism once I started being bullied in middle school. I turned to art, school groups, and organizing as a way to combat bullying at school. The combination and intersections of my creative, leadership, and organizing abilities carried me through grad school as they led to campaigns and efforts to address police brutality, community-level hunger, urban dumping, and other civic injustices.

Some of my personal sources of inspiration include the works of Angela Davis, Audre Lorde, Nina Simone, and Assata Shakur—women who were unafraid and apologetic in speaking truth to power and using their art forms to amplify causes. When I was an arts organizer in the Ferguson Uprising, we opened and ended all of our actions with the words of Assata Shakur: “It is our duty to fight for our freedom. It is our duty to win. We must love and support one another. We have nothing to lose but our chains.” And when our work, The Mirror Casket (2014), was collected and celebrated by the National Museum of African American History and Culture, it was the words of Angela Davis that proclaimed it as “Art of Protest” for Smithsonian magazine. And in Art of Protest, I close the first chapter with one of my favorite Nina Simone quotes, which reminds us that “An artist’s duty is to reflect the times.” In addition, I actively organize my own quarterly book club, Deliberate & Unafraid, that’s inspired by poet Audre Lorde, who changed her name to Gamba Adisa (Warrior: She Who Makes Her Meaning Known) prior to her passing. Each of these women—these artists and activists—inspire me politically and creatively.

Oftentimes, kids are fed this message that they are powerless because they are young and vulnerable compared to the adults in their environment. What would you have to say to this?

I think that many adults project their own vulnerabilities, insecurities, and fears onto young minds, which I don’t think is fair. In my early career, I was a museum educator at a contemporary art museum, and in leading school, family, and community programs, I witnessed firsthand the deep consciousness and emotional awareness that young people—toddlers to teens—embody. Art has been a catalyst in my ability to engage with them in unpacking, interpreting, critiquing, and expressing their experiences and views of the world. And more than vulnerability, I’ve seen the self-advocacy, the collective power-building, and the visual voice that they’ve been able to cultivate at school and in their homes. I wish more adults would meet young people where they are and trust that they are capable of knowing and resiliently navigating more than what we give them credit for. 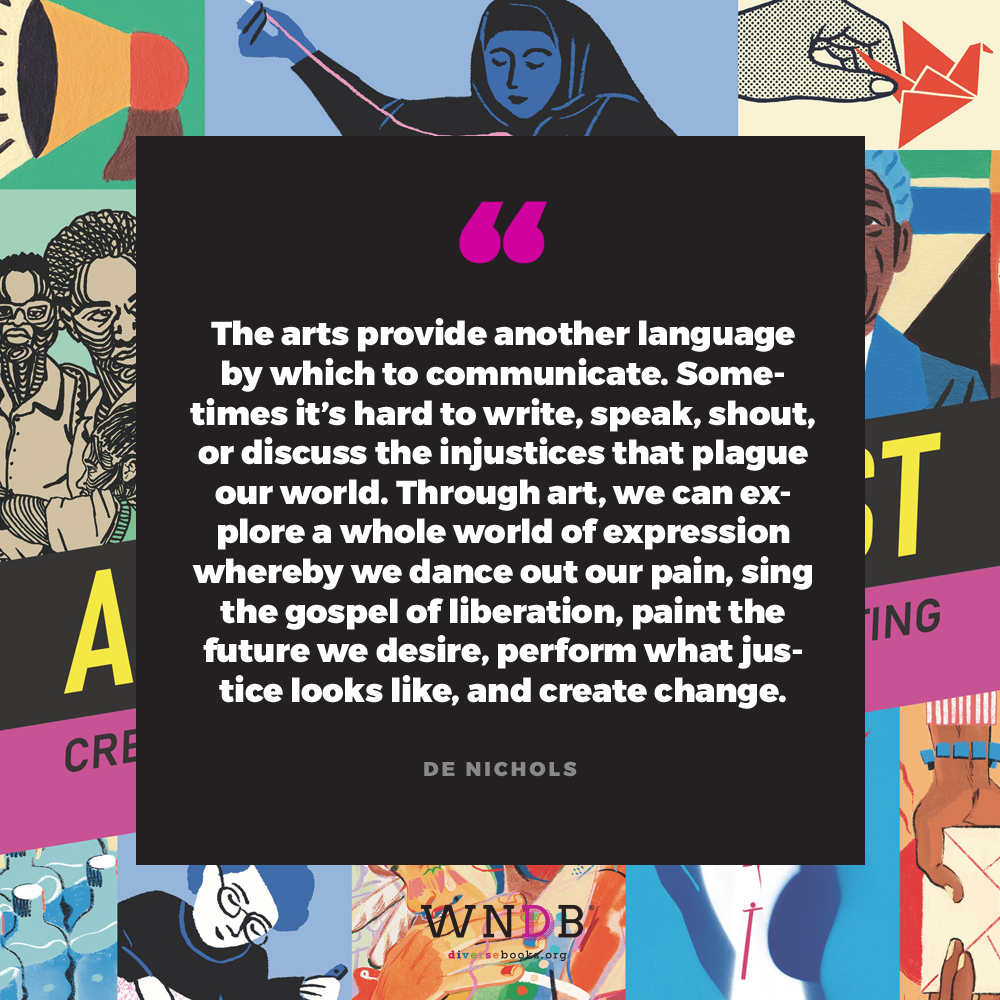 What other books or projects do you see Art of Protest in conversation with, especially visual activism?

During the recent Boston Book Festival, I had the joy of engaging in conversation regarding “YA: Revolution and Resistance” with authors of three activism books that I think youth across the nation and world at-large will value and enjoy. This includes Revolution in Our Time by Kekla Magoon, Rise Up! by Crystal M. Fleming, and This Book Is Feminist by Jamia Wilson.

Considering the various forms of activism that exist out there, what do you think is so powerful about artistic activism?

The arts provide another language by which to communicate. Sometimes it’s hard to write, speak, shout, or discuss the injustices that plague our world. Through art, we can explore a whole world of expression whereby we dance out our pain, sing the gospel of liberation, paint the future we desire, perform what justice looks like, and create change.

Besides Art of Protest, are there any projects or story ideas you are working on and at liberty to speak about?

Yes! I am a co-organizer of the national Design As Protest (DAP) collective, which has cultivated demands and direct actions to hold the fields of architecture, design, urban planning, etc accountable to the ways in which our cities and public spaces are designed to produce experiences of harm, injustice, and hatred against people who have been marginalized. I lead the DAP Studio, and our team is currently writing and producing a series of nine zines to illustrate and tell the stories of some of such injustices and the various people across the nation who are bringing forth change.

In addition to this, I help lead community efforts with The Griot Museum of Black History in St. Louis, MO, and we are designing and launching a series of public markers that celebrate the stories of how Black women have impacted the civic, cultural, and social progress of the city. With this year’s election of the city’s first Black woman mayor, Tishaura Jones, and the federal leadership of our hometown Congresswoman, Cori Bush, as two examples, this project will be the first of its scale to honor Black women in public space in the city.

What books would you recommend to the readers of We Need Diverse Books?

Hmm, there are so many. I’m still blown away by the speculative fiction and fantasy works of Akwaeke Emezi, so I would recommend starting with Pet and exploring further. 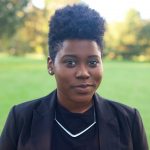 De Nichols is an arts-based organizer, social impact designer, serial entrepreneur, and keynote lecturer who mobilizes change-makers nationwide to develop creative approaches to the social, civic, and racial justice issues that matter most within communities. She is currently a Senior User Experience Researcher of Product Inclusion at YouTube and a 2020 Loeb Fellow at Harvard University’s Graduate School of Design. Art of Protest is her debut book. You can find her online at https://www.denichols.co/ and follow her on Twitter and Instagram at @de_nichols.

Previous Post: « We Need Diverse Books Joins as Fiscal Sponsor of People of Color in Publishing
Next Post: Q&A With Huda Fahmy, Huda F Are You »
We're thrilled to reveal the cover for TOKYO NIGHT