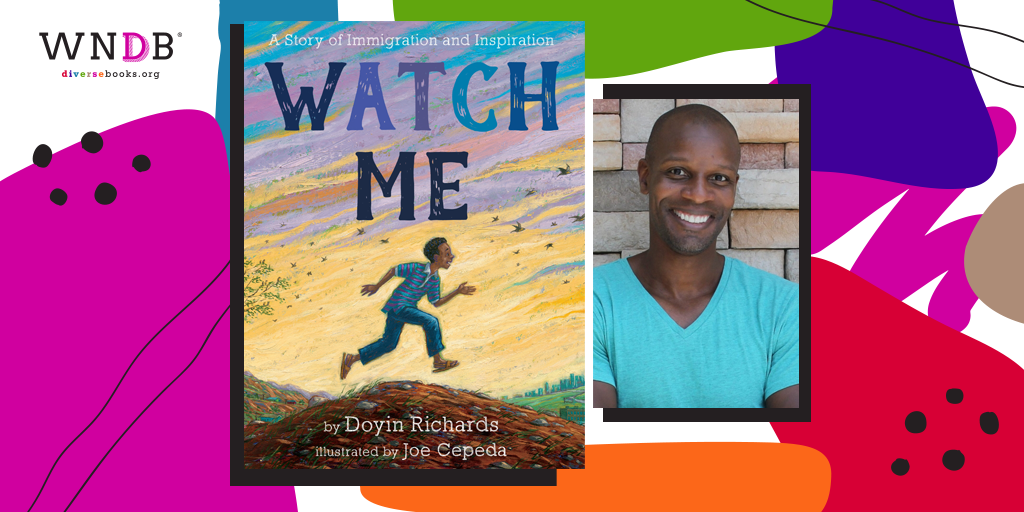 Today we’re pleased to welcome Doyin Richards to the blog to discuss his new picture book Watch Me: A Story of Immigration and Inspiration, out now!

A picture book about immigration, WATCH ME is based on the author’s father’s own story.

Joe came to America from Africa when he was young. He worked hard in school, made friends, and embraced his new home. Like so many immigrants before and after him, Joe succeeded when many thought he would fail.

In telling the story of how his father came to America, Doyin Richards tells the story of many immigrants, and opens the experience up to readers of all backgrounds. Here is a moving and empowering story of how many different people, from different places, make us great. Acclaimed artist Joe Cepeda brings the story to life with beautiful paintings, full of heart. 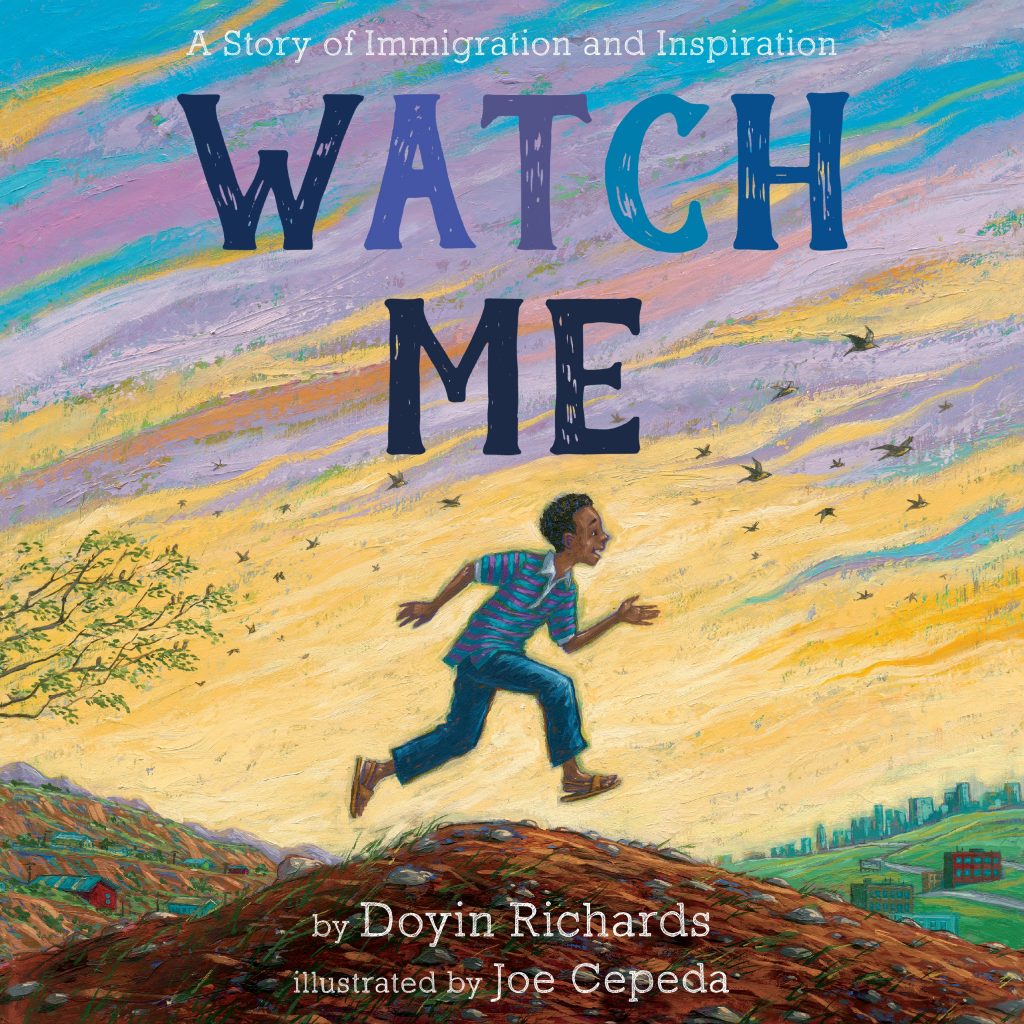 What does it mean to you to be able to publish your father’s story?

It means everything to me. I always viewed my dad as a superhero who was capable of anything and everything. It wasn’t until I was older that I realized how poorly he was treated due to his skin color and West African accent. Sadly, many people in the U.S. believe that immigrants from so-called “sh*thole countries” can’t add value here, and my goal is to prove all of them wrong with my dad’s story. A story that is relatable to millions of immigrants in the U.S. today.

The art in this book is also gorgeous. How closely did you work with the illustrator?

Not much at all. Joe Cepeda is a genius and he knew what would work well for the story by conducting research on my dad’s homeland. I was blown away when I saw the artwork for the first time and I’m still blown away now.

This is such a powerful narrative about overcoming adversity. How did you decide on which hurdles and forms of marginalization to depict?

The concept of being a “different person in a different place” is one that many people can relate to. Maybe it’s being the only woman in a male-dominated field. Maybe it’s being the only Black person in a room filled with white people. No matter what it is, it takes an enormous amount of mental/emotional strength and resilience to keep showing up when everyone around you tells you that you don’t belong. I want to inspire readers to know that small-minded people will always tell you that you’re not good enough, smart enough, etc. to reach your dreams. But it’s up to you to write your story, not anyone else. 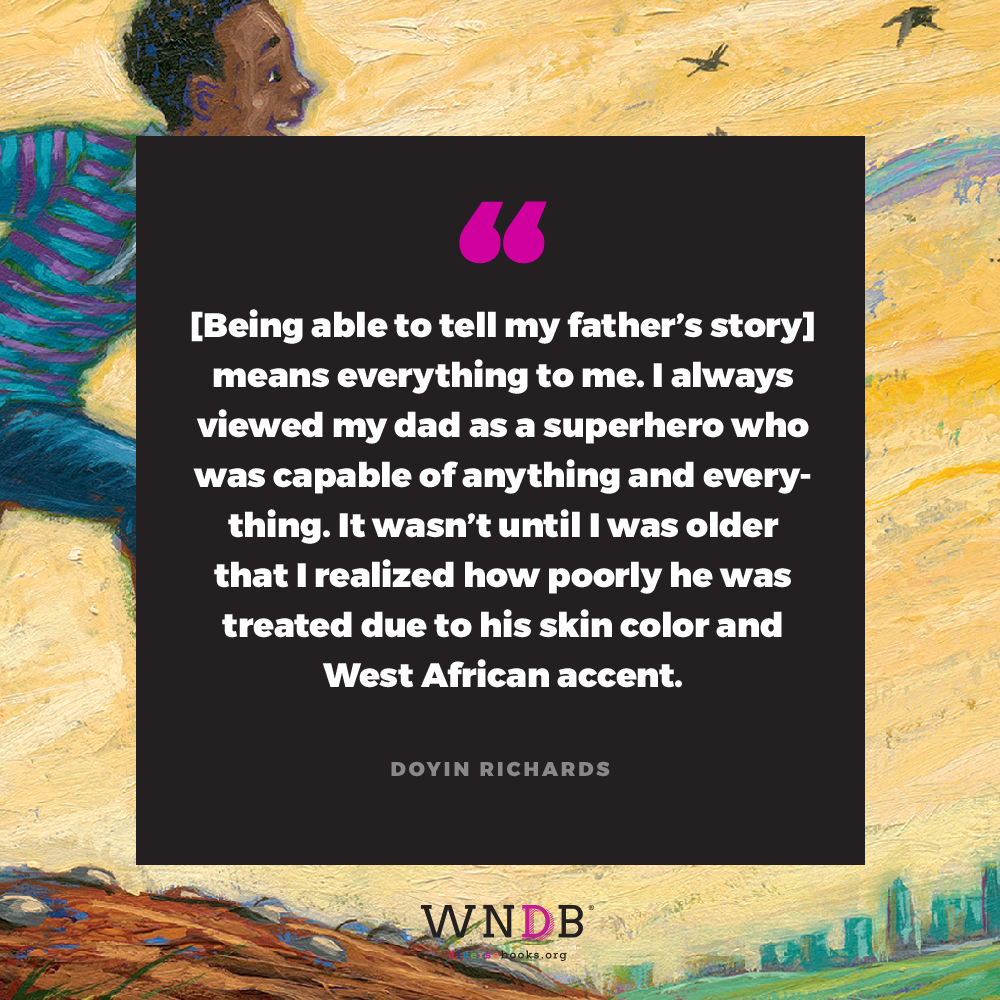 How do you approach discussions with young children around big issues like racism or bias?

I teach anti-racism courses for kids, and one of the main concerns I hear from parents is they have no idea how to talk to their children about racism and bias. For starters, I define racism and bias in ways they can understand. These topics are so nuanced that even grown-ups fail to understand them, so I try to make it as simple as possible. Then I get into “solution mode” and give them advice on what they can do right now to fight against racism and bias. Books like WATCH ME and my other book WHAT’S THE DIFFERENCE? are great resources in that regard.

What kinds of discussions would you like this story to start?

Which picture books do you consider your book in conversation with? Are there any in particular you’d recommend readers turn to after finishing yours?

Not to cop out here, but I think instead of turning to another book, I think they need to turn to each other. Readers should be having conversations about race, racism, and bias at home, at work, in schools, and in their communities. It may be uncomfortable and clunky at first, but these conversations must be had in order to make the world a better place. 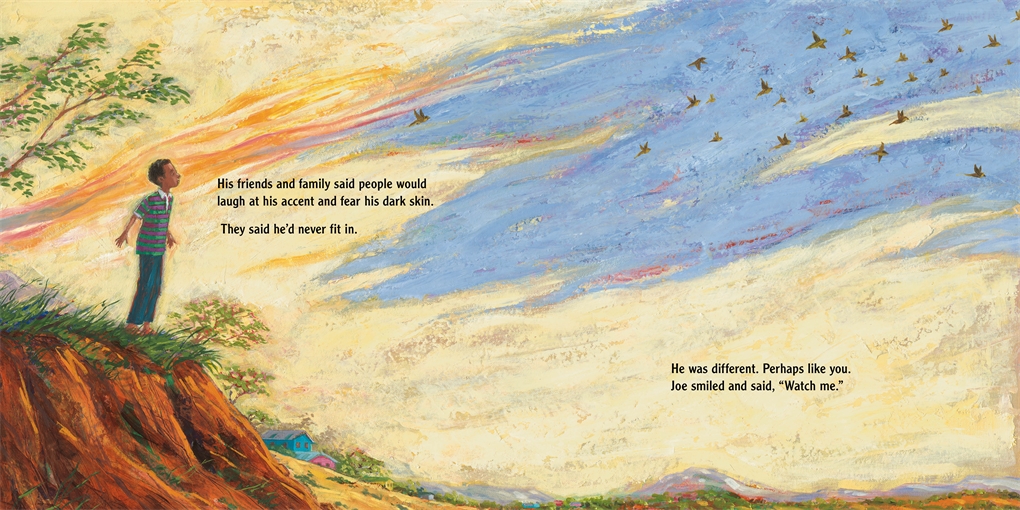 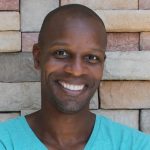 Doyin Richards is one of the most respected voices on modern fatherhood today. He’s also founder of Daddy Doin’ Work, author of the picture book I Wonder: Celebrating Daddies Doin’ Work, What’s the Difference, and Daddy Doin’ Work: Empowering Mothers to Evolve Fatherhood. He lives in Los Angeles with his wife and their two daughters. 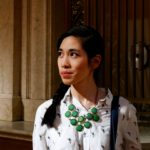 Previous Post: « Angie Thomas on Concrete Rose, Writing Advice, and Her Next Project
Next Post: I Hope I Dream of Popo Helps Reconnect People »
Happy pub week to MAÑANA: LATINX COMICS FROM THE

Happy book birthday to YA romcom LOVE SOMEBODY by