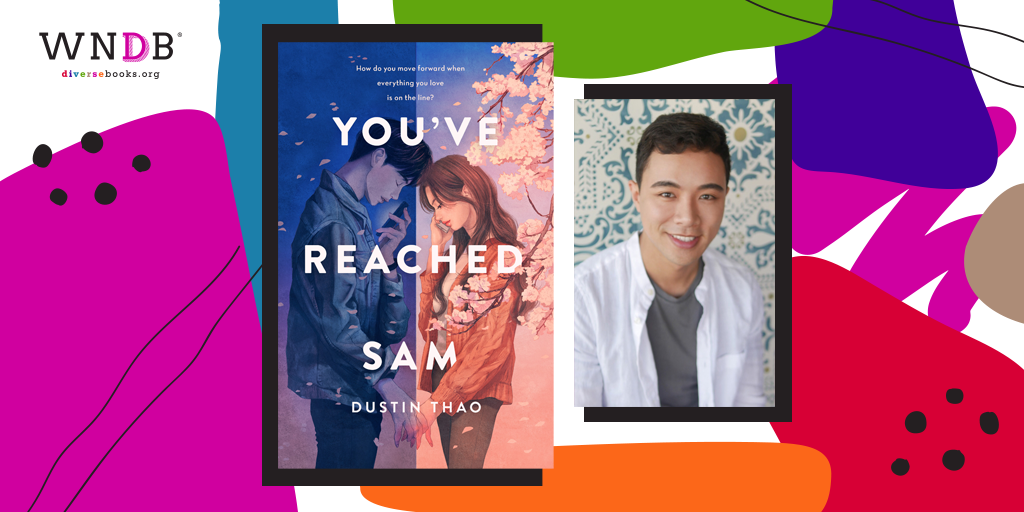 If I Stay meets Your Name in Dustin Thao’s You’ve Reached Sam, a heartfelt novel about love and loss and what it means to say goodbye.

How do you move forward when everything you love is on the line?

Seventeen-year-old Julie has her future all planned out—move out of her small town with her boyfriend Sam, attend college in the city, spend a summer in Japan. But then Sam dies. And everything changes. Desperate to hear his voice one more time, Julie calls Sam’s cellphone just to listen to his voicemail. And Sam picks up the phone.

What would you do if you had a second chance at goodbye?

Filled with a diverse cast of characters, the heartache of first love and loss, and the kind of friends that can get you through anything, plus a touch of magic, You’ve Reached Sam will make an instant connection with anyone looking for a big emotional romance of a read. 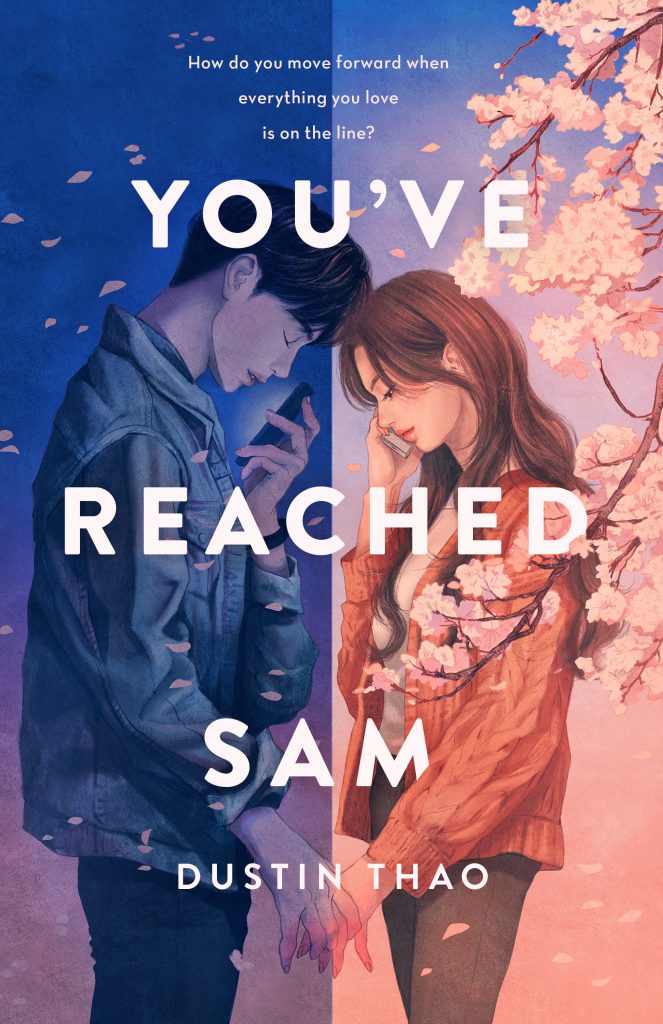 Congratulations on your debut! What has your experience been like to publish a book during a pandemic while also pursuing a PhD?

Thank you so much! You know, publishing has a lot of ups and downs, but it’s been a pretty great experience overall. Since this is my first book, I don’t really know what debuting outside of a pandemic even looks like, to be honest. I’ve never seen an in-person book event before. I’ve also never met anyone in publishing until this summer. Maybe subconsciously that’s why I moved to New York City a few months ago. To feel closer to things. The Wednesday Books office is opening back up, so maybe I’ll get the tour! Meet the team. Grab lunch with my editor. You know, the full experience. Honestly though, I’m just excited to walk into a bookstore and see You’ve Reached Sam on the shelf for the first time. It’s been over two years now since the book announcement. When they say publishing is slow, they really mean it. And the pandemic only makes the days feel longer and longer. But November 9th is coming up fast, so I’m really feeling the bubbles of anxiety in my stomach. If I end up crying at YallFest, at least my face will be hidden behind a mask.

As for the PhD, things have always been a mess, with or without the pandemic. But since publishing is slow, it’s nice to have something else to focus on. That said, I often find myself in a vortex of deadlines I can’t climb out of…

Have you always been a writer? What inspired you to tell Sam and Julie’s story?

Yes, I’ve been taking creative writing classes since high school. I don’t know if I ever thought I would publish an actual book though. It’s a long, complicated process after all, with some luck in timing involved, so I often try to remind myself how far I’ve come. As for You’ve Reached Sam, I came up with the premise several years ago, but it took a very long time before I actually sat down and started writing it. I think it’s something we’ve all thought about before. What we would say to someone we’ve loved and lost, if we got the chance. I kept starting it and stopping, unsure of what exactly I wanted to say. Maybe that was for the best, because the story definitely evolved over the years. And after experiencing losses in my own life, the writing became very cathartic for me.

How did you get the idea to incorporate the magical realism element that connects Sam and Julie through their phones?

I think in this digital age, our phones connect us more than anything. For better or worse. When we miss someone, it’s the first thing we reach for, right? We look at their pictures on Instagram. We read through their old messages. I don’t think Julie is alone when she calls Sam just to hear his voice through his voicemail. Since the book was announced, so many people have told me they’ve done something similar after losing someone. The story doesn’t focus too much on the magic or explanation of things. It focuses on what happens next and what it all ultimately means in moving forward.

What was your favorite part of writing this book? What was the most challenging?

I loved writing the flashback sequences. Coincidentally, they were also the most challenging. I like to think they were a little experimental, in terms of style. I drew inspiration from movie montages where scenes transition from one memory to the next in a fluid sequence. I took a screenwriting class in college, so maybe that’s where I ultimately got the idea. Whenever I pick up the book, they’re often the chapters I want to reread when I want to revisit Sam and Julie’s world. Of course, whether or not I pulled it off well is up to the reader to decide haha.

A major theme of You’ve Reached Sam is the idea of second chances. Though Julie is given the opportunity to say goodbye, she instead chooses to continue their calls. Talking to Sam helps her through the weeks after his death, but it also keeps her in the past, pushing off that last goodbye. What was it like to balance the push and pull between these emotions?

This was definitely one of the most challenging parts of the book. Grief is such a difficult topic to write about, so I did my best to be as honest as possible. What would some of us do in Julie’s shoes? Something I hope her journey conveys is that grief is not a linear experience. Julie has moments of selfishness, which might frustrate some readers. But life is messy and frustrating, especially when dealing with loss. And we grow from these experiences. When it comes to this second chance to speak with someone you’ve loved and lost, one of the questions I wanted to explore was: what are the implications? Is this necessarily the best thing for us in moving forward? That’s something I hope readers continue to think about after reading the book. 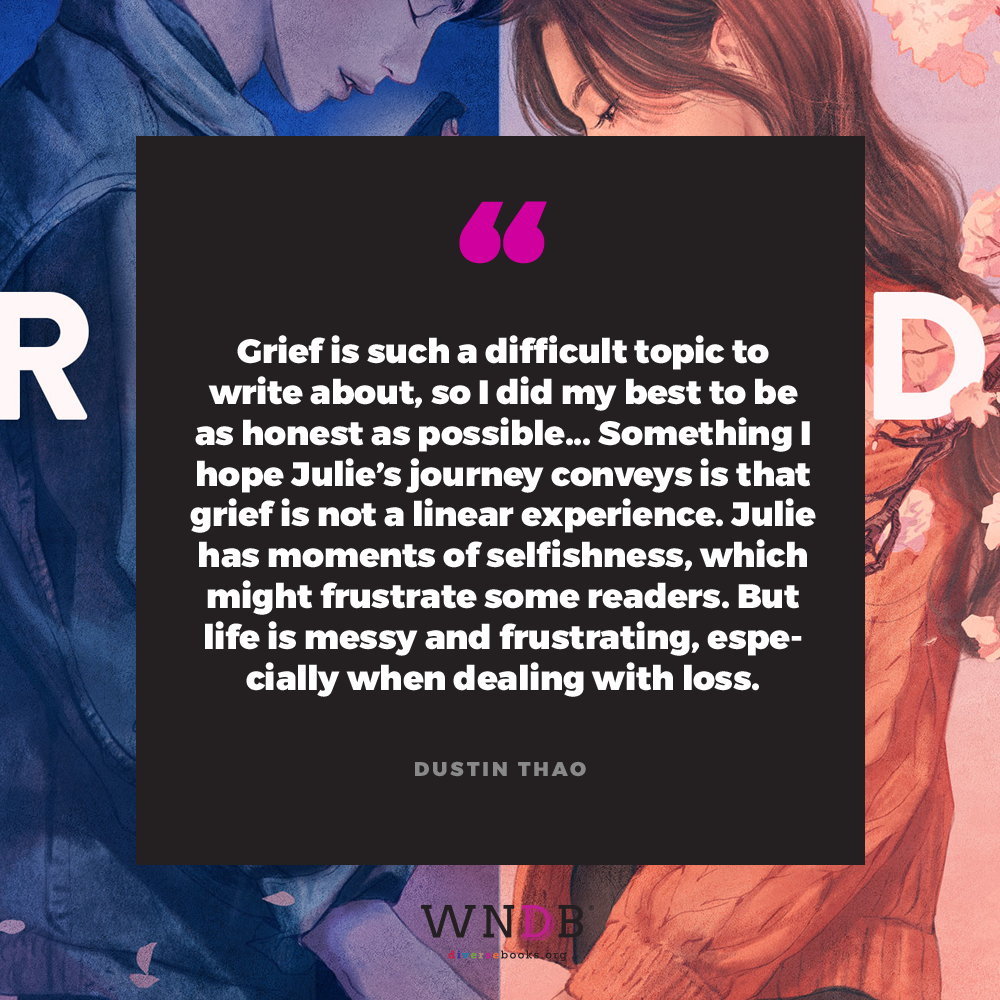 While the book focuses on the relationship between Julie and Sam, I knew it was important to highlight the other characters whose lives were also impacted by Sam’s death. We get to see how grief manifests itself in different people. Though Julie’s interactions with these other characters, I wanted to show how friendships can form and strengthen in times of sadness. I wanted to show that grief doesn’t have to be experienced alone. I really hope that message comes through in the book.

In addition to Your Name (Kimi no Na wa), are there any other movies, books, or shows that have a similar aesthetic, resonance, or emotional beat as You’ve Reached Sam? Are there other books that are in conversation with it?

If you’re looking for other animes as emotional as Your Name and You’ve Reached Sam, I recommend Withering with You and Anohana: The Flower We Saw That Day. For something with the same moodiness, i.e. falling cherry blossoms, I recommend 5 Centimeters per Second (which, fair warning, is plotless). As for emotional books, I love Tell The Wolves I’m Home.

Making music is an important part of Sam and Julie’s relationship. What are a few songs that embody their relationship?

“Fields of Gold,” of course. It’s their song, after all. The lyrics perfectly embody Sam and Julie and their love for each other. I’m getting teary-eyed just thinking about it.

What do you hope readers will take away from reading You’ve Reached Sam?

All in all, I hope readers think about grief differently. That there’s no right or wrong way to experience it, and it’s okay to make mistakes along the way. Grief is complicated and sometimes we get stuck in the past. But letting go isn’t about forgetting who we’ve lost. “It’s balancing moving forward with life, and looking back from time to time, remembering the people in it.”

What is a question you wish you were asked more (and the answer)?

What is the last book that made you full on cry?

My answer: The Paper Menagerie by Ken Liu. Please read it.

Is there anything you can tell us about your next novel? Is it a sequel to You’ve Reached Sam?

My second book is another YA contemporary with a speculative twist that also deals with grief. I’m actually in the middle of writing it as we speak… I’m still working on the pitch, but it has all the vibes of We Are Okay and WandaVision. Although it’s not a sequel to You’ve Reached Sam, I like to think it exists in the same universe at the exact same time…

Dustin Thao is a Vietnamese-American writer based in Southern California. He graduated from Amherst College with a B.A. in Political Science, and is in a PhD program at Northwestern University. He writes contemporary young adult fiction. You’ve Reached Sam is his YA debut.

Previous Post: « Q&A With Makiia Lucier, Year of the Reaper
Next Post: Q&A With Dan-ah Kim, The Grandmaster’s Daughter »
Save the date for the #WalterAwards23! You can now