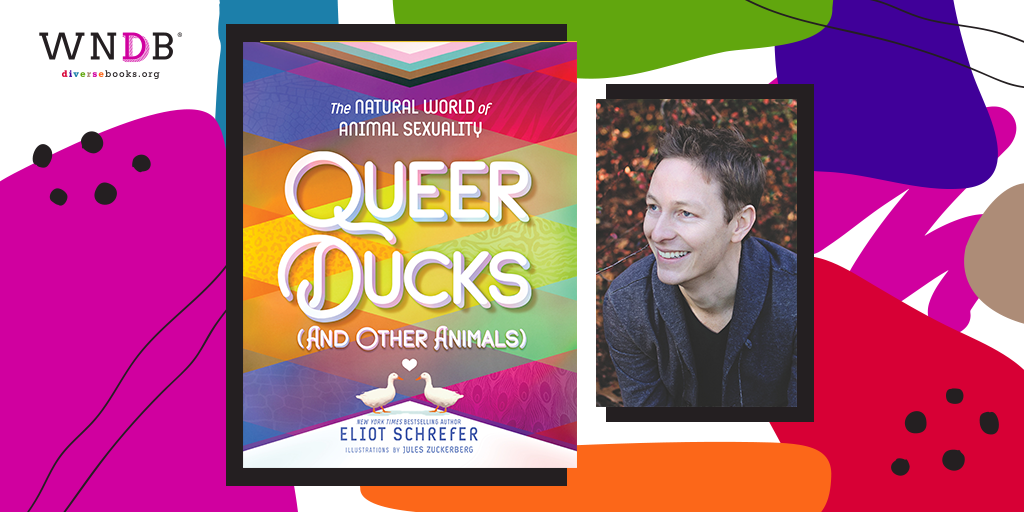 Today we’re pleased to welcome Eliot Schrefer to the WNDB blog to discuss Queer Ducks (and Other Animals), illustrated by Jules Zuckerberg and out since May 24, 2022!

This groundbreaking illustrated YA nonfiction title from two-time National Book Award finalist and New York Times bestselling author Eliot Schrefer is a well-researched and teen-friendly exploration of the gamut of queer behaviors observed in animals.

A quiet revolution has been underway in recent years, with study after study revealing substantial same-sex sexual behavior in animals. Join celebrated author Eliot Schrefer on an exploration of queer behavior in the animal world—from albatrosses to bonobos to clownfish to doodlebugs.

In sharp and witty prose—aided by humorous comics from artist Jules Zuckerberg—Schrefer uses science, history, anthropology, and sociology to illustrate the diversity of sexual behavior in the animal world. Interviews with researchers in the field offer additional insights for readers and aspiring scientists.

Queer behavior in animals is as diverse and complex—and as natural—as it is in our own species. It doesn’t set us apart from animals—it bonds us even closer to our animal selves. 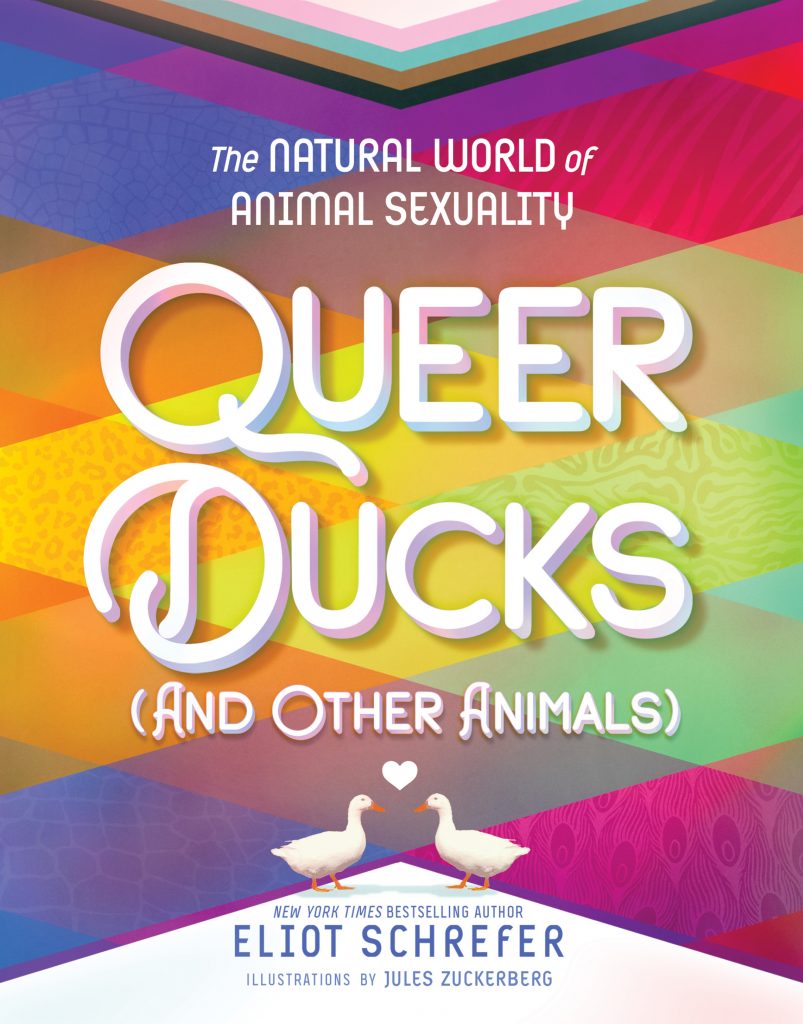 Tell me a little about your new book, Queer Ducks (And Other Animals). What can readers expect? What do you hope readers take away from the book?

Hi, and thanks for having me! I felt urgency writing this book, because we’re currently experiencing this backslide in acceptance for young queer people. At the same time, there’s been a recent upswell of research into same-sex sexual behavior in the animal kingdom. My goal in Queer Ducks (And Other Animals) is to let young queer readers know that they’re not alone—not just within human societies, but within the broader animal world. It’s a tour of ten animal species that run the gamut from insects through primates, answering questions like whether bisexuality exists in animals, or if sexuality comes more from genetics or culture. It’s a book I totally would have dug as a young gay nerd.

Where did you find inspiration to write this book in particular?

I think about the 11-year-old me, who realized he was gay and immediately turned to the encyclopedia in the middle school media center. The entry for “homosexuality” told me that it was an aberration unique to humans, because of confused relationships to parental figures. That seemed to confirm the “It’s Adam and Eve, not Adam and Steve” way kids in my school talked about LGBTQIA+ people. I got really down, and only came out of that funk years later, by learning to embrace my unnaturalness. Some kids don’t make it out of that funk. It’s shocking to me that the word hasn’t spread further about the diversity of sexual expression in the animal kingdom. Queerness is natural.

As Queer Ducks (And Other Animals) is non-fiction, when did you first come across this body of queer animal research?

I’m getting a master’s in Animal Studies at NYU. Scholars come through and give talks, and a couple in a row spoke about same-sex sexual behavior in their study species. I realized that the information around LGBTQIA+ behavior in animals existed in silos: the dolphin researchers knew it occurred frequently in their animal of study, and the garter snake researchers knew it occurred in theirs, but they weren’t in communication around it. The broader picture was missing. I remember thinking someone should get all these studies together in one place. And then I thought oh crap, I guess that’s me.

What about the research made you want to write this book? Why did you choose young adults to be your target audience?

Queer Ducks (And Other Animals) argues that same-sex desire has a fundamental place in the natural world. Adults need to hear that, I think, but young people wrestling with their own sexualities or sexual identities need it even more. We often expect teens to read adult books, but I want to see adults reading YA books normalized. I’m hoping they cross the aisle.

While doing your research for this book, what was the most interesting thing you found out about?

There are fascinating evolutionary arguments for same-sex sexual behavior! It’s not just a random genetic mutation or a by-product of other adaptations. In some species, like the bonobos and bottlenose dolphins, it strengthens social alliances. In some, like Laysan Albatross, the preponderance of female-female nesting couples allows for more total offspring per generation. In some, like insects, sexual fluidity increases total reproduction for the population. There are some compelling theories that the percentage of same-sex bonding in an animal species (like penguins) is similar to the mortality rates of parents—it’s like a built-in foster system.

How would you describe the voice that you use throughout the book?

Cathy Berner, a bookseller at Bluewillow Books in Houston, read an early copy and said it was like sitting next to me in science class, passing notes and comics back and forth and then going for coffee afterwards. That made me really happy. Science writing can often stick to an academic stance, walling off the personal, but I wanted to express how my own love of science had big emotional effects on me as a teenager, made me realize there was order and meaning to the universe—something I didn’t even know how much I was craving. I include pertinent bits of my own life for the same reason I include Q&As with working researchers: to humanize science.

The illustrations/comics, from artist Jules Zuckerberg, really accentuate the book, your voice, and its research. What was your inspiration for including these?

I owe that flash of insight to my editor, Ben Rosenthal! He’s always got an eye out for all sorts of readers, and he felt the comics were a way to make sure the book felt inclusive for readers who needed more access points to the material. The premise is there’s an all-animal GSA, and the animals are introducing themselves. Jules really knocked it out of the park. How do you get pathos and humor out of a doodlebug telling a story about an awkward sexual experience? I still don’t know the answer, but Jules managed it! 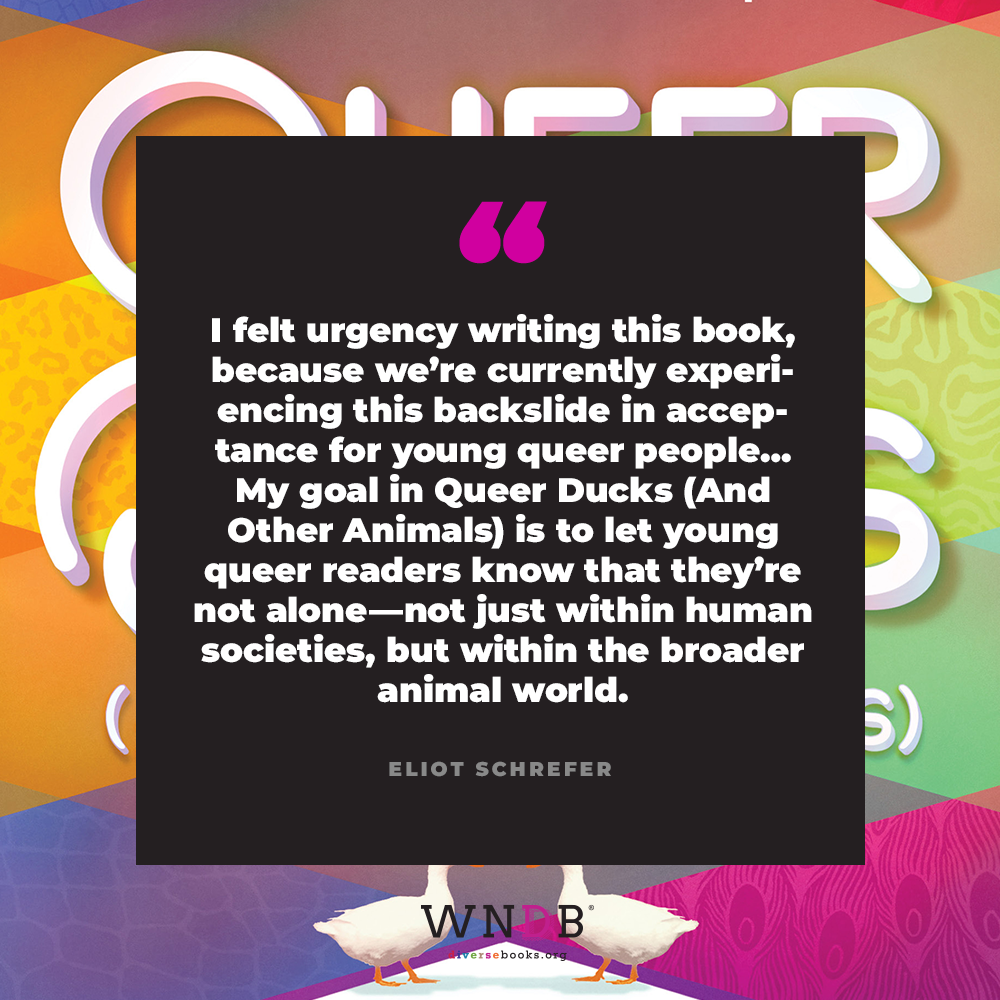 What advice would you give to teens and young adults trying to navigate their identities?

Where you are now is not where you’ll always be. Know that you are worthy of love, from yourself and others, and that even if you’re struggling where you are, you can get yourself someplace someday where you are loved and accepted. Maybe not tomorrow, but soon.

When you write, what is your favorite part of the writing process? Why?

I love revising a first draft. Since I tend to draft to the end of a book without letting myself reread what I’ve put down, the first revision is when I find out what’s there. I discover bits that I forgot I put in! As I fix language and cut paragraphs, I also get the feeling that I’ve finished the workday in better shape than I started it—unlike drafting, when I know I’m just making more and more of a mess that I’ll have to clean up someday.

Did you encounter any challenges or unexpected surprises when writing the book?

My biggest struggle was cutting through the wealth of material to find the book’s shape. As a recent study in Nature found, there are over 1,500 animal species to choose from that exhibit same-sex sexual behavior. I didn’t want to write an encyclopedia of animal sexual behavior. I wound up choosing ten species that each helped answer a guiding question. I selected white-tail deer, for example, because they can help explore the question of whether trans is a category that could apply to animals.

If you could have your dream panel promoting Queer Ducks (And Other Animals), what would it be about? What other authors and other voices would you like to have on it alongside you?

I know this is setting the bar very high for a dream panel, but I’d love to have actual non-human animals on the panel with me, maybe the ten I feature in the book. I’d serve as moderator. One of the big problems writing about animal behavior is the “other minds” problem, that it’s impossible to be definitive about how another being thinks and feels about the world. I’m able to present plenty of evidence in Queer Ducks (And Other Animals) that leads to likely conclusions, but the animals’ voices are absent. The panel would have a bull sitting next to a wrasse fish. How much fun would that be?! What would they have to say to each other?

Do you have any recommendations for published or forthcoming books or voices we should be reading?

My favorite book last year was Brandy Colbert’s YA nonfiction Black Birds in the Sky, about the Tulsa Race Massacre. I’m really excited about Tobias Madden’s hilarious YA debut, Anything But Fine, about a ballet dancer whose career gets derailed after he gets injured.

What question do you wish you were asked more often (and the answer)?

Q: This book could have been YA instead of adult! Why didn’t you write it as a YA?

Sure! I’m writing a historical gay YA novel, about a real-life figure: a young pianist who was the toast of France before he got embroiled in the social machinations of high society. It should be out next year.

Eliot Schrefer is a New York Times bestselling author, and has twice been a finalist for the National Book Award in Young People’s Literature. His non-fiction has appeared in the New York Times and Discover magazine, and his novels include The Darkness Outside Us, Endangered, and the Lost Rainforest series. He is on the faculty of the Hamline University and Fairleigh Dickinson University MFA programs in creative writing, is getting a MA in Animal Studies at NYU, and reviews books for USA Today. Visit him online at www.eliotschrefer.com. 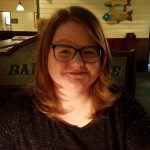 Olivia Mules is currently pursuing her master’s degree in library and information science. Olivia’s goal is to work in academic librarianship and reference services with a focus on information literacy. Before starting her degree program, she was a special education teacher and taught math and science. Her favorite literary heroines are Elizabeth Bennet, Gemma Doyle, and Arya Dröttning. When Olivia is not doing schoolwork, she enjoys cooking, music, hikes with her wife and daughter, and drinking an inordinate amount of iced coffee.

Previous Post: « Q&A With Sojourner Kincaid Rolle, Free At Last
Next Post: Cover Reveal for There Goes the Neighborhood by Jade Adia »
We’re delighted to reveal the cover & full jacke