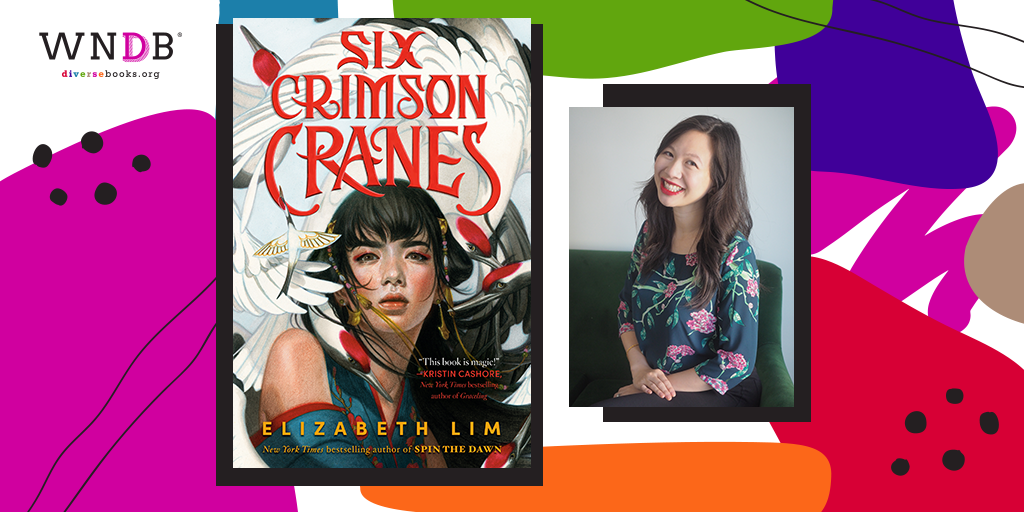 Today we’re pleased to welcome Elizabeth Lim to the WNDB blog to discuss her YA novel Six Crimson Cranes, out July 7, 2021!

Shiori’anma, the only princess of Kiata, has a secret. Forbidden magic runs through her veins. Normally she conceals it well, but on the morning of her betrothal ceremony, Shiori loses control. At first, her mistake seems like a stroke of luck, forestalling the wedding she never wanted. But it also catches the attention of Raikama, her stepmother.

A sorceress in her own right, Raikama banishes the young princess, turning her brothers into cranes. She warns Shiori that she must speak of it to no one: for with every word that escapes her lips, one of her brothers will die.

Penniless, voiceless, and alone, Shiori searches for her brothers, and uncovers a dark conspiracy to seize the throne. Only Shiori can set the kingdom to rights, but to do so she must place her trust in a paper bird, a mercurial dragon, and the very boy she fought so hard not to marry. And she must embrace the magic she’s been taught all her life to forswear–no matter what the cost.

Weaving together elements of The Wild Swans, Cinderella, the legend of Chang E, and the Tale of the Bamboo Cutter, Elizabeth Lim has crafted a fantasy like no other, and one that will stay with readers long after they’ve turned the last page. 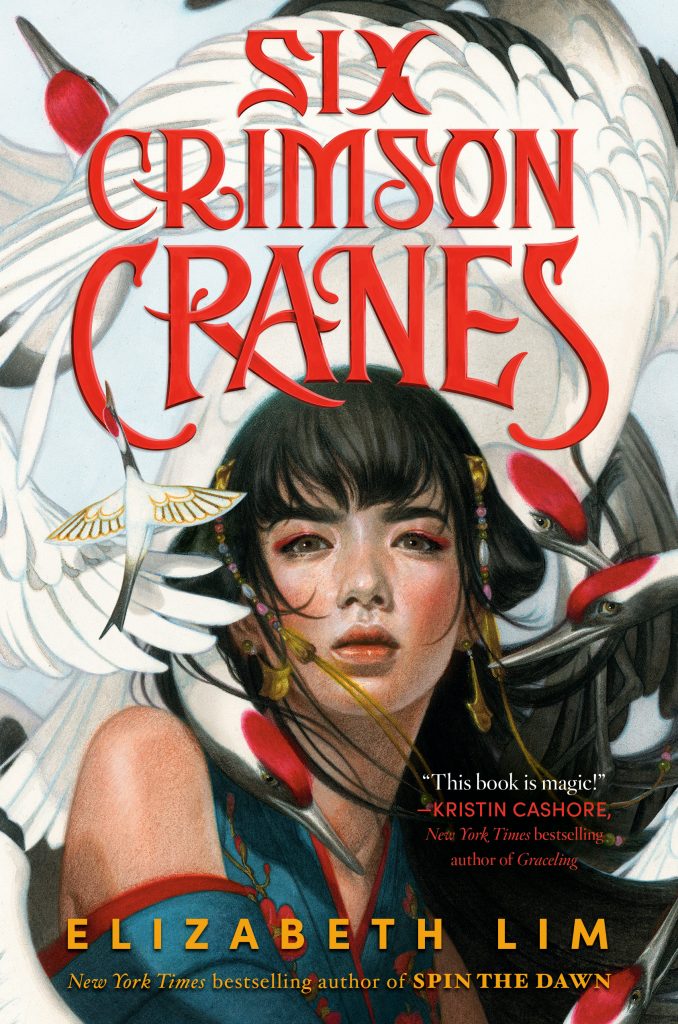 Are there any historical regimes or periods that inspired the setting of Six Crimson Cranes? What are they and why did you choose them?

Spin the Dawn was gently inspired by the Tang and Song Dynasties and the golden age during which trade along the Silk Road was prominent. Set several centuries before, Six Crimson Cranes sees the beginnings of the Silk Road, and its setting is inspired by ancient China and Japan. It’s hard to pin down a specific historical regime or period, but I’d say the Tang Dynasty and Heian Period probably influenced the setting most.

Why did “The Wild Swans” in particular appeal to you? Were there any other fairytales or myths you drew upon to write Six Crimson Cranes?

The Wild Swans has always been one of my favorite fairy tales—I watched several animated versions of the story when I was a kid, and they’ve stuck with me until adulthood, and since there haven’t been too many retellings of the Wild Swans, I knew I wanted to create my own take on it. There are plenty of other myths and folktales I drew upon as well, including several Chinese and Japanese stories: The Tale of the Bamboo Cutter, about a radiant princess whose hand is sought by numerous suitors until her true heritage is revealed, Madame White Snake, about a snake spirit who becomes a human, The Girl with the Black Bowl, and the legend of Chang’e the Moon Lady. I also make allusions to Cinderella, Rumpelstiltskin, and Thumbelina!

What is the significance of using cranes instead of swans?

My answer to this question is a pretty simple one! Cranes are highly symbolic in both Chinese and Japanese culture and represent longevity and immortality. When I first started out reimagining the Wild Swans fairytale, I made this change as an initial step to making the story my own and setting it apart from the version that most readers may know.

What other research did you conduct to write the story?

Since Six Crimson Cranes is set in the same universe as Spin the Dawn, I referred to the research I conducted for my previous duology as well as my studies from university (I minored in East Asian Studies). Given that both series are fantasies, I didn’t research too heavily and relied a lot on my imagination!

Shiori is bubbly, mischievous, and clever, yet she often struggles when exposed to the world beyond her home. What was it like depicting Shiori’s struggles and growth over the course of the novel?

It was a challenge as well as a joy to write, honestly! I tried to make her as realistic a seventeen-year-old as I could and relied a lot on my own experiences as a teen. I didn’t leave home for the first time until I went to college, and though obviously I wasn’t cursed into an awful predicament like Shiori, I remember it being tough acclimating to life by myself. I really wanted to show her character change and mature over the course of the book, and for her to learn that actions have consequences. At the same time, I wanted to keep her spirit and bubbly nature, and I think Kiki as her sidekick helps keep Shiori’s morale high even during the darkest of times. 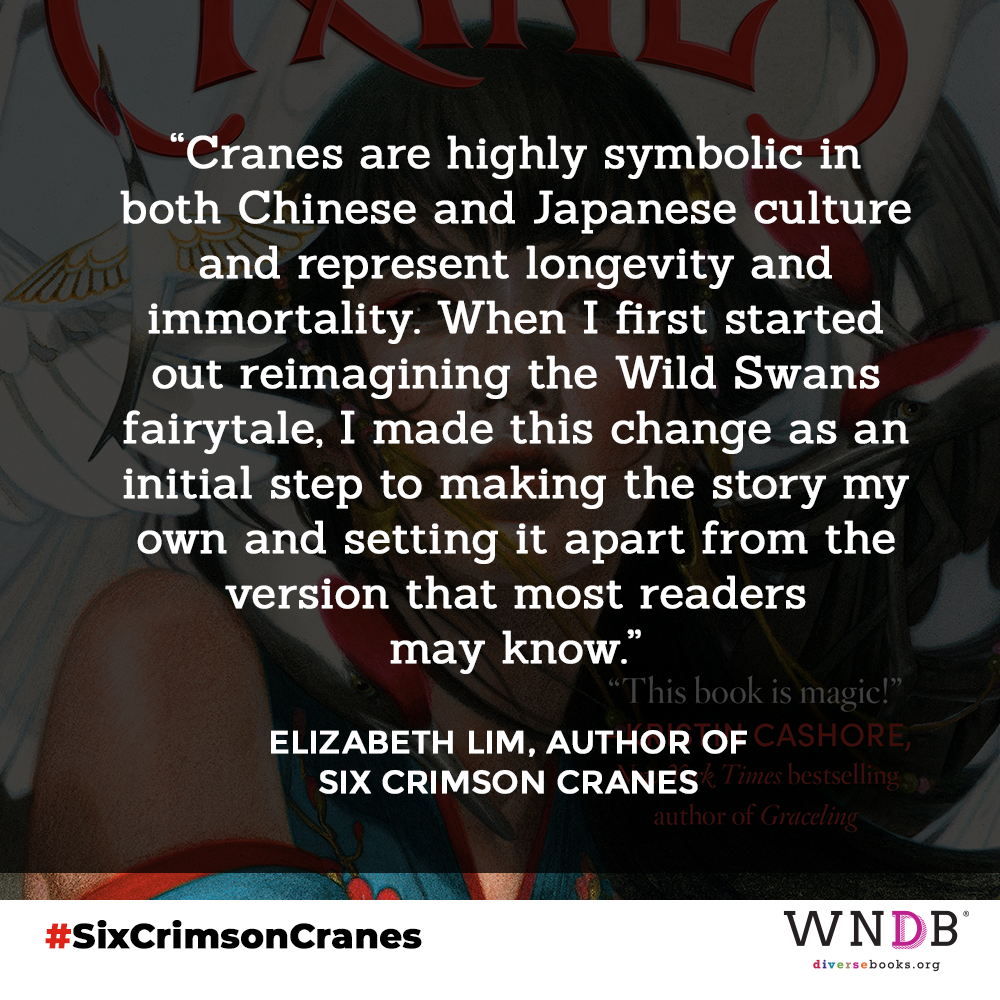 I thought it was interesting how you depicted Raikama and Shiori’s relationship. Often, the stepmother is relegated as a one-dimensional, antagonistic character, yet you developed Raikama as complex and layered. What was your process like in crafting Raikama’s character?

I actually wrote a very detailed outline of Raikama’s story before I wrote Six Crimson Cranes, which helped tremendously when crafting the relationship between Shiori and her stepmother. In the original story, there isn’t much reasoning offered for why the stepmother turns the princes into swans, and I knew I wanted to explore that and flesh out the stepmother/queen. Raikama’s motives and background were one of the driving forces behind the plot in Six Crimson Cranes!

One of my favorite parts of the novel is the description of the various dishes featured at the Summer Festival. Do you have any favorites that you would recommend to readers?

Ah, I have far too many! I myself love roasted sweet potatoes glazed with honey, I also love the glutinous rice cakes that Shiori makes (my favorites are stuffed with black sesame paste or peanuts).

Is there anything you can tease about the sequel as of now?

Do you have any fantasy recommendations for those who enjoyed Six Crimson Cranes?

Yes! Off the top of my head, I would recommend A Thousand Beginnings and Endings, which is a fairytale anthology edited by Ellen Oh and Elsie Chapman, the Wicked Fox duology by Kat Cho, and Gods of Jade and Shadow by Silvia Moreno-Garcia.

Elizabeth Lim grew up in the San Francisco Bay Area, where she was raised on a hearty diet of fairy tales, myths, and songs. Before becoming an author, Elizabeth was a professional film and video game composer, and she still tends to come up with her best book ideas when writing near a piano. An alumna of Harvard College and the Juilliard School, she now lives in New York City with her husband and her daughter. Spin the Dawn (book 1 in the Blood of Stars duology) was her first original novel, and Unravel the Dusk is her second. She is also a contributor to the New York Times Bestselling “A Twisted Tale…” series. Visit her at elizabethlim.com Follow her on Twitter at @LizLim Follow her on Instagram at @elimpix.

Nithya Ramcharan is a WNDB blog volunteer from New Orleans. She loves writing and is an avid reader. When she isn’t busy with academics, she also loves art, music, playing with her dogs, and dreaming of all the places she would love to visit. Diversity in literature is something she is passionate about, as it was relatively scarce when she was young and its lack impacted her outlook and writing negatively.

Previous Post: « Cover Reveal for Vial of Tears by Cristin Bishara
Next Post: Q&A With Shakirah Bourne, Josephine Against the Sea »