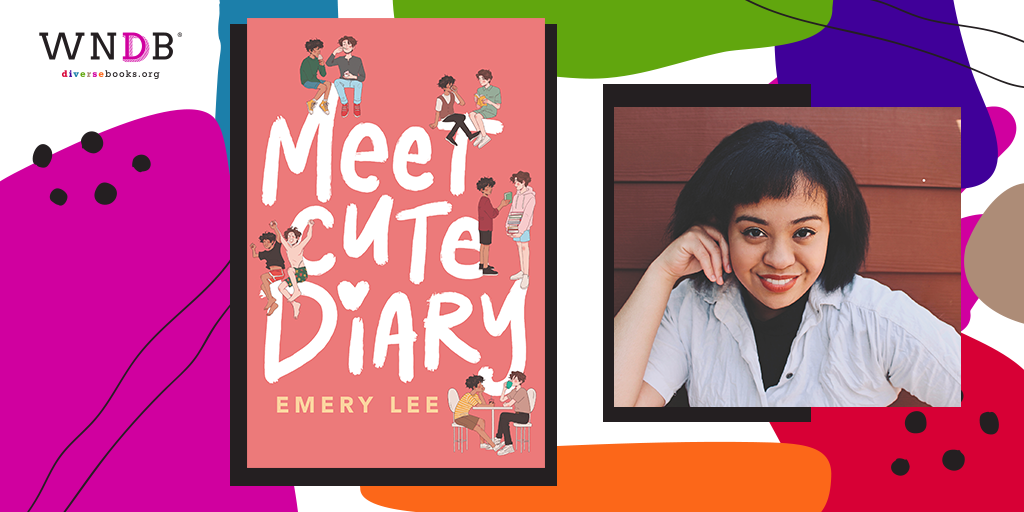 Today we’re pleased to welcome Emery Lee to the WNDB blog to discuss his YA novel Meet Cute Diary, out May 4, 2021! We revealed the cover last year.

He has to be for his popular blog, the Meet Cute Diary, a perfect collection of trans meet cutes and happily ever afters. There’s just one problem: all the stories are fake. What started as idealized fantasies of a trans boy afraid to step out of the closet has grown into a beacon of hope for trans readers across the globe.

When a troll exposes the Meet Cute Diary as fiction, Noah’s world unravels. The only way to save the Diary is to convince his fans that the stories are true, but how can he spin fiction into fact without any proof? Then Drew walks into Noah’s life, and the pieces fall into place: Drew is willing to fake-date Noah in order to save the Diary.

But as Noah’s feelings for Drew transcend their staged romance, Noah quickly realizes that dating in real life isn’t quite the same as finding love on the page. With the Meet Cute Diary and Noah’s heart hanging in the balance, Noah will have to choose between following his own expertise or discovering that some of the most romantic endings are the ones that go off script. 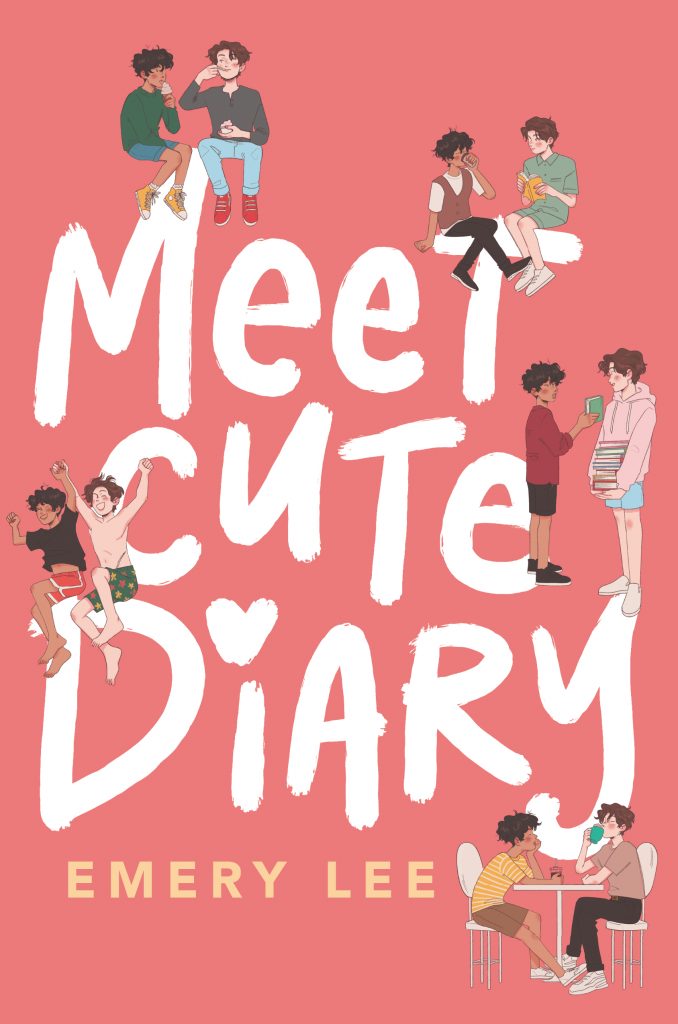 Meet Cute Diary is a contemporary, but world-building is just as important in this setting as it would be in SFF. Can you tell us how you built out Noah’s world, both his online world and his in-person one and how those intersect?

Sure, so Noah’s IRL world goes from Florida, where he used to live, to Colorado where he spends the summer out to California where he finally moves at the end of the book. This was largely all just inspired by my own road trip from Florida to California the summer before I wrote the book, so a lot of it was taking places I had visited (like Red Rock) and just plopping them into the story or taking ideas of places I’d visited and making them more ambiguous. His internet world is basically just a culmination of a lot of experiences I personally had back when I used to use Tumblr and just kind of channeling those on a grander scale since he has a popular blog. For Noah, his internet life and his real-life are actually really separate up until he starts fake-dating Drew, largely because his internet persona is built on a bed of lies, so I think the factor that really starts to bridge the gap is their fake relationship.

In this book, Noah’s world is populated with other LGBTQ+ people and it felt intentional. Why did you want Noah to have a variety of other LGBTQ+ folks in his life to connect with?

On the one hand, it’s often said that queer people flock together, and that’s really been my experience. Even before knowing I was queer, I found myself surrounded by a lot of people who later all turned out to be queer.

But I also really wanted this book to be a story about trans joy and the joy of exploring your identity and finding a place you belong, and I think that that first and foremost starts by finding people who not only accept you for who you are, but can really understand and meet you where you are, so I wanted to give Noah a support system that wasn’t all allocishet people LOL.

The transphobia in this book that Noah and his friends experience stays out of the spotlight, creating a safe space for trans teens who may be reading this, in contrast to the way many books have focused solely on transphobia and other oppression/trauma. Why did you make this decision in your writing?

For exactly the same reason you just said: “In contrast to the way many books have focused solely on transphobia and other oppression/trauma.” I’ve been reading queer books almost exclusively for the past five or six years, but I’ve never read a book where the trans character didn’t experience identity-based trauma. I’ve never consumed any media where the trans character wasn’t constantly worrying about being outed or not passing or some other suffering related to trans identity.

I wanted to craft a story where transness just is, where trans people can be confident and happy and worry about things like love and friendship and what to do with their hair instead of focusing on all these struggles about identity. Ultimately, I think that stories about overcoming these struggles can be really important and cathartic, but they shouldn’t be all we have, so I wanted to contribute to trans stories about anything else.

Noah is a flawed character and Meet Cute Diary gave him the space to explore who he is. How did you create his character journey and what were some of your favorite parts to write?

One of the big things I first considered as I crafted Noah was, “What do cis white rom-com characters get to do that the rest of us never do?” and that was really how I came up with Noah in all of his mess, haha. I wanted him to have a very familiar romcom journey, that kind of arrogance at the beginning where the character then has to go on to realize they were the ultimate cause of their unhappiness a la movies like Clueless, and I wanted to make sure that he had the room to be messy and terrible in a way that marginalized characters are never allowed to be because they always have to be perfect representations of their whole community.

So I think a lot of his journey was just balancing those lines between making him come to terms with all the things he’d done wrong while also still allowing him to be imperfect and kind of selfish and arrogant in ways that people who look like me never can be in fiction. And I think my favorite parts to write were the parts where he kind of bordered on self-awareness just to be like, “eh, whatever.” I think it shows a lot about the type of person he could be in five or ten years, even if he’s not quite there yet. 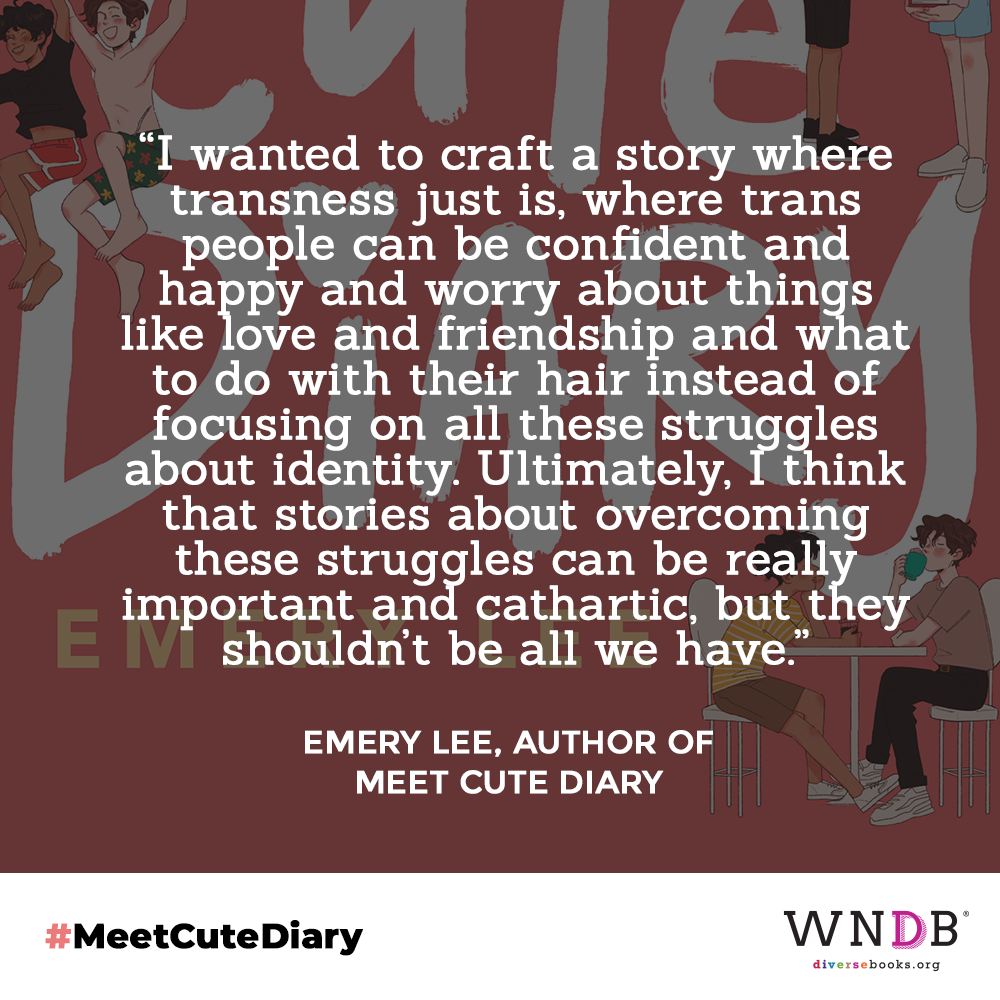 Did you do any research for this book and if you did, what’s one of your favorite things you learned?

My research for the book was mostly isolated to like geographical information and I think I pulled up like one statistic on trans people in Miami LOL. But it was actually really fun pulling up Google Maps and clicking around on a bunch of different shops and such in Denver. There’s a restaurant Noah and Drew go to in the book that I actually based off of a shop I found on Google Maps!

Probably either a hero who doesn’t act like a hero and nobody realizes is supposed to be a hero because they act like a villain like Bakugou from My Hero Academia or Gen from Dr. Stone. I would definitely have white or blonde hair though. No question.

If you were going to create a blog like Noah’s Meet Cute Diary (non-writing related), what would it be about?

I am ashamed to say that I’ve actually had a lot of different blogs in my time, and I’ve let them all die LOL. But if I were to start a blog tomorrow, it would probably be a The Untamed fan blog, but in the nature of Meet Cute Diary, I would make it a real-world AU and just pretend they were real people LOL.

As a tea enthusiast, what kinds of tea do you love most? Can you give us a kind of tea that matches Noah and the other major characters in Meet Cute Diary? (If anyone doesn’t like tea at all, that’s valid, even though they’re wrong!)

I love different teas for different occasions! I’m big into milk teas, but if I’m looking for a morning tea, it’s gonna have to be a black tea, and only hot green tea when I’m sick. I would say Brian would be like a chamomile or chai, Becca’s a Thai milk tea, Devin’s lavender, Drew would be a Southern sweet iced tea, and Noah would be either a black sesame milk tea or matcha!

If the characters in Meet Cute Diary showed up on your doorstep in real life, who do you think you’d get along with most? And who would honestly grate on your nerves even though you love them?

I feel like Devin is the most similar to my real-life friends, so I’m going to say I’d get along with em the most. And honestly, I would fight Noah, and I would win.

Can you tell us about any books coming out in 2021 or beyond that you’re excited to read?

Gearbreakers by Zoe Hana Mikuta and Iron Widow by Xiran Jay Zhao are definitely at the top of my list! I’m also super excited for Blood Like Magic by Liselle Sambury and Ophelia After All by Racquel Marie! 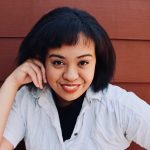 Emery Lee is a kidlit author, artist, and YouTuber hailing from a mixed-racial background. After graduating with a degree in creative writing, e’s gone on to author novels, short stories, and webcomics. When away from reading and writing, you’ll most likely find em engaged in art or snuggling cute dogs. Find em online at emeryleebooks.com.