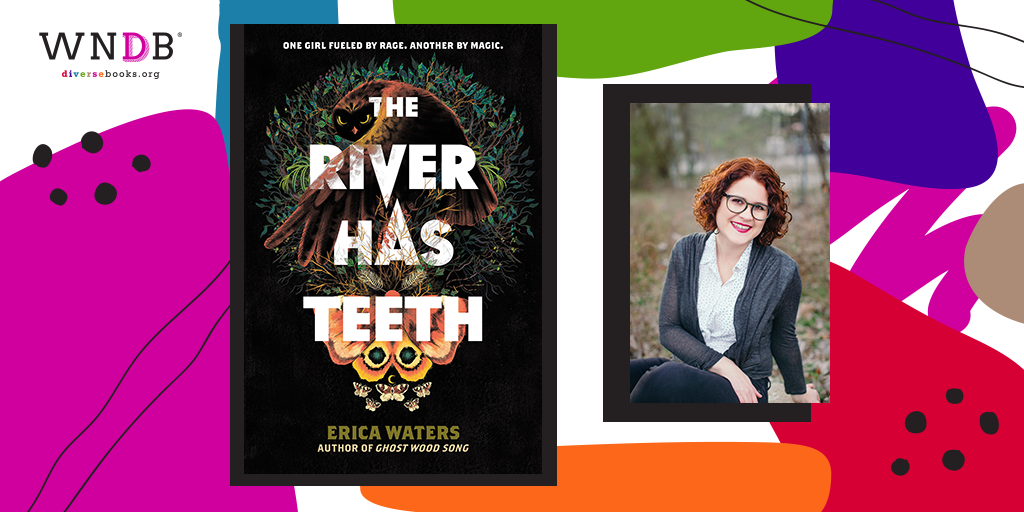 Today we’re pleased to welcome Erica Waters to the WNDB blog to discuss her YA novel The River Has Teeth, out July 20, 2021.

Lush and chilling, with razor-sharp edges and an iron core of hope, this bewitching, powerhouse novel of two girls fighting back against the violence the world visits on them will stun and enchant readers.

Girls have been going missing in the woods…

When Natasha’s sister disappears, Natasha desperately turns to Della, a local girl rumored to be a witch, in the hopes that magic will bring her sister home.

But Della has her own secrets to hide. She thinks the beast who’s responsible for the disappearances is her own mother—who was turned into a terrible monster by magic gone wrong.

Natasha is angry. Della has little to lose. Both are each other’s only hope. 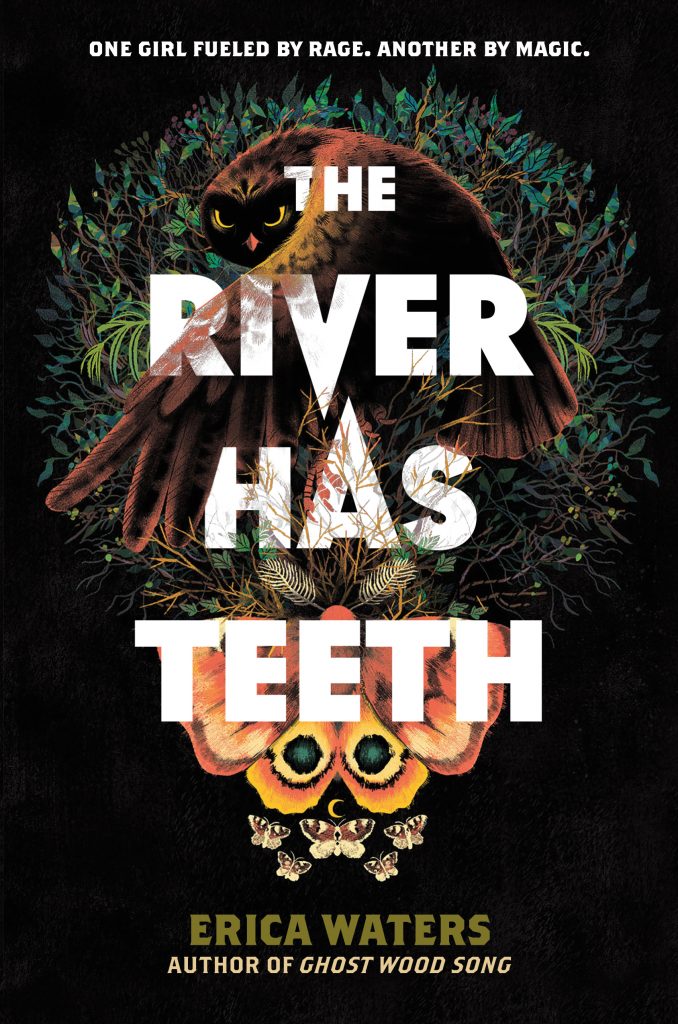 You’ve told a story in other interviews that’s really interesting. With Ghost Wood Song, you said an experience you had of being at home upstairs and hearing a banjo playing below was sort of the catalyst for the book’s premise. Did you have any similar experiences that helped crystalize the premise of The River Has Teeth?

Yes! I got the first inkling of an idea for this book when I visited a Nashville nature park called Bells Bend for the first time. Unlike most nature parks here, which are wooded, Bells Bend is mostly pastoral—gently rolling fields full of scrub and wildflowers. It sounds peaceful and kind of sweet, right? Well, on this day it was autumn and all the shoulder-high plants were dry and brown and made an eerie shhhhhhh sound in the wind. There was no one else there, just me and the endless brown whispering fields and the endless blue empty sky. It felt somehow like being dropped into a surrealist painting, a place untethered from reality, holding its own power.  I thought, “There’s a book in here somewhere”— and there was!

From descriptions of the book, there seems to be a theme running through it having to do with girls and women who often aren’t seen or heard finding their voices or standing up for themselves. There are girls who disappear, girls who have secrets to hide. I think this has the potential to resonate a lot in a post-Me Too era. Do you think there’s a message there—relating to the importance of girls making their stories known?

I dedicated this book to “everyone who’s been made to feel like prey, and wished for sharper teeth.” I hope that readers who have experienced or feared violence will find catharsis here. I certainly worked through a lot of my own fear and anger around issues of male violence while writing the book. But the book also raises questions about whose stories are listened to and magnified and whose are ignored.

Essentially all of the main characters in the book are girls. Of course, no one questions it when a book’s entire cast is male because for so long that was the default (or there would maybe be a token female character who’s the love interest of the protagonist). What do you think is the significance of telling a story that is so driven by characters who are girls?

Yes, this is primarily a story about girls and women, though there are a handful of men who play important roles in the narrative. But the story is driven by relationships between female characters—between sisters, mothers and daughters, friends, enemies, and lovers. This book might be about male violence, but it doesn’t revolve around men. It revolves around the fears, hopes, loves, and passions of girls and women. To tell you the truth, it never even occurred to me that the story might be anything else.

What is it that draws you to stories about magic? And in particular, magic that’s tinged with spookiness and mystery. I personally really love stories having to do with magic, and I think it’s even more compelling when the magic is a little obscured or not completely straightforward.

It’s true, I like my magic with big helpings of spooky and mysterious. Spending my formative years in a haunted house might have something to do with it!

But, more seriously, I think magic is such a good way to get at things buried under the surface, all the things we want to hide that are waiting and festering in the dark. Magic brings them out into the light where we can face them and hopefully deal with them.

Can you talk a little about the process you go through when determining the rules and scope of the magic in your novels?

One important question I ask myself very early on, which I picked up from my literary agent, Lauren Spieller, is “What is the magic a metaphor for?” I need to be able to articulate to myself what thematic role the magic in my story is playing and what I’m hoping to say with it. This is what gives the fantasy elements power and meaning in the story. Other important questions: Where did the magic come from? How does it work? Who has access to it, and why?

I tend to think about magic more thematically than logistically. I’m not a high fantasy author, and I like my magic systems to be a little looser, less rigid than others might. I like there to be mystery to the magic. That said, the various magical elements need to hold together and feel organic. So I need to make sure I understand the magic and fantasy worldbuilding as completely as I’m able to even if those rules never appear explicitly on the page.

The River Has Teeth is your sophomore novel. How did it feel to set out to write the follow-up to Ghost Wood Song, given the success it had?

A sophomore novel is a strange, unwieldy thing. It’s often written under contract and on deadline, which is a big change from the endless amount of time and freedom you get to write your first book. You’re also worrying about whether fans of your first will like your second and what sort of career trajectory you’re making for yourself. Meanwhile, you’re dealing with public reception to the first novel and trying not to let any of it get into your head while you write the new book. I’ll admit it’s a lot to balance.

But for me writing The River Has Teeth was exhilarating and challenging—I really had to stretch myself to write a dual-POV and a more complex plot and to tackle difficult, sensitive topics. I think working on your sophomore book is the best way to survive debuting with the first.

In other interviews, you’ve mentioned you make outlines for your revision process. Of course, most writers would agree on the importance of creating a solid outline for your story, but going through a somewhat similar process for revisions is something that might be less common but I think it’s a great idea. Can you tell us a little about what that process entails for you?

I am naturally a pantser, meaning I make up a story as I go rather than planning it. I’ve always liked the adventure and discovery of this style of drafting. However, pantsing has drawbacks, which for me includes having to do a ton of revision after I’m done! So I often will complete a first draft, read through it to see what I’ve got, and then create an outline to make the existing story hit all the necessary plot points. Backward planning, if you will.

However, these days I’m writing on other people’s schedules, so I’m becoming more of a plotter. The book I’m working on right now was very carefully planned before I wrote it. I was worried that I wouldn’t have the same joy of discovery by planning a book, but I was wrong. There’s still so much room to watch your characters grow and develop, the world takes shape, and the plot expands as you work to fill in the existing outline. Plus, revision is much, much easier! 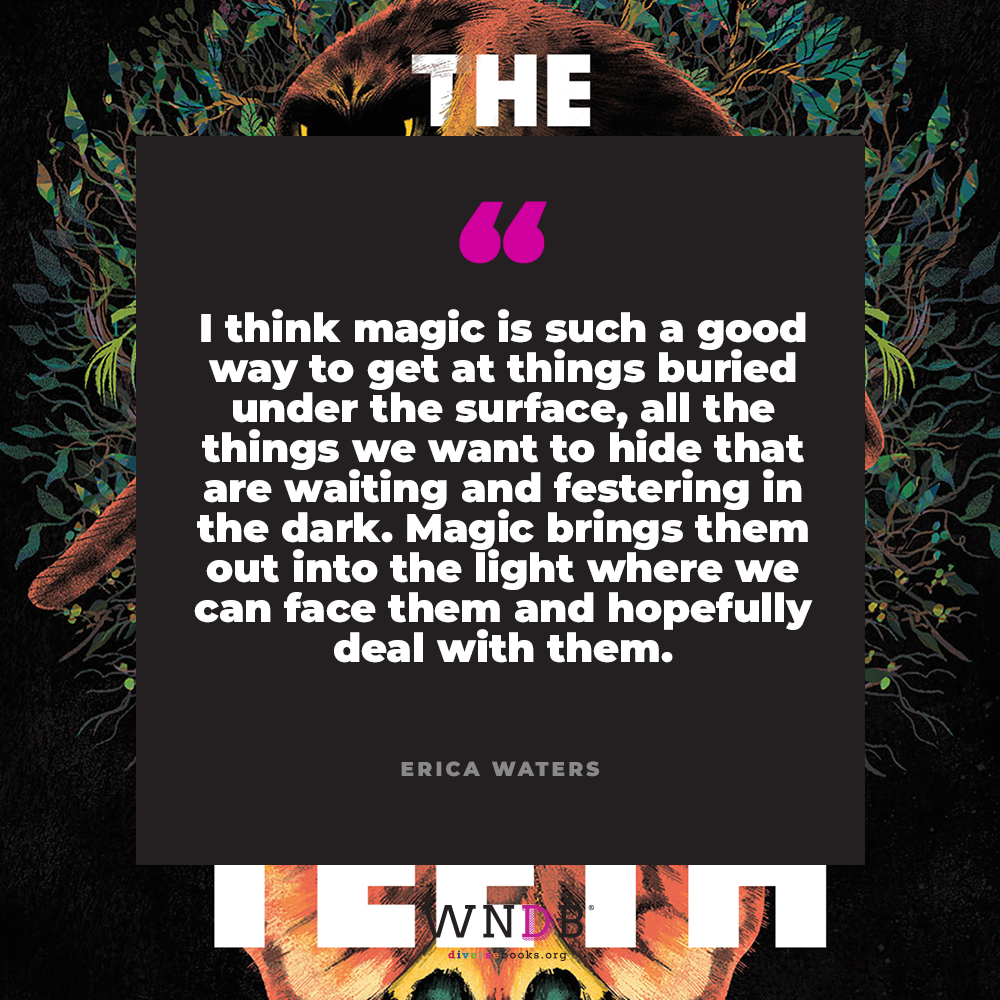 My third HarperTeen novel, The Restless Dark, comes out in 2022. It’s a queer supernatural thriller about two girls who team up in a macabre true crime contest to find the missing bones of a serial killer in a foggy, very creepy canyon in Georgia.

I’m also working on a spooky middle-grade novel and an adult horror novel.

Are there any upcoming books you’re excited to read?

Yes! There are so many excellent books coming out in 2021. I’m especially excited for The Dead and the Dark by Courtney Gould, Within These Wicked Walls by Lauren Blackwood, and the spooky MG novel A Touch of Ruckus by Ash Van Otterloo. 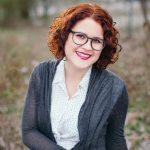 Erica Waters grew up in the pine woods of rural Florida, though she now resides in Nashville, Tennessee. She has a Master’s degree in English and works as a university writing tutor. When she’s not writing books, you can find her hanging out with her two dogs, Nutmeg and Luna. Her debut novel, Ghost Wood Song, was a Bram Stoker Awards finalist and was nominated for YALSA’s 2021 list of the Best Fiction for Young Adults. Her forthcoming books include The River Has Teeth and The Restless Dark. 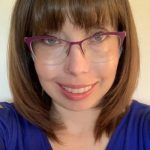 Sarah Cooke is a digital journalist and culture writer. She has written feature articles, blogs, and interviews for Marvel, DC Comics, Fembot Magazine, Voice of Youth Advocates, and more. Sarah has reported live from both the New York and San Diego Comic-Cons. She authored an article discussing methods of teaching line art in comics for the forthcoming book How to Analyze & Review Comics: A Handbook on Comics Criticism, published by Sequart Publishing. She worked as a digital media assistant at the Junior Library Guild and she is a big fan of science-fiction, fantasy, and all things geeky.

Previous Post: « Cover Reveal for Breathe and Count Back from Ten by Natalia Sylvester
Next Post: Burn It Down: On World Building a Defiant Queer Response to Hogwarts »
LAST CALL for WNDB 2023 Internship Grant Partners!