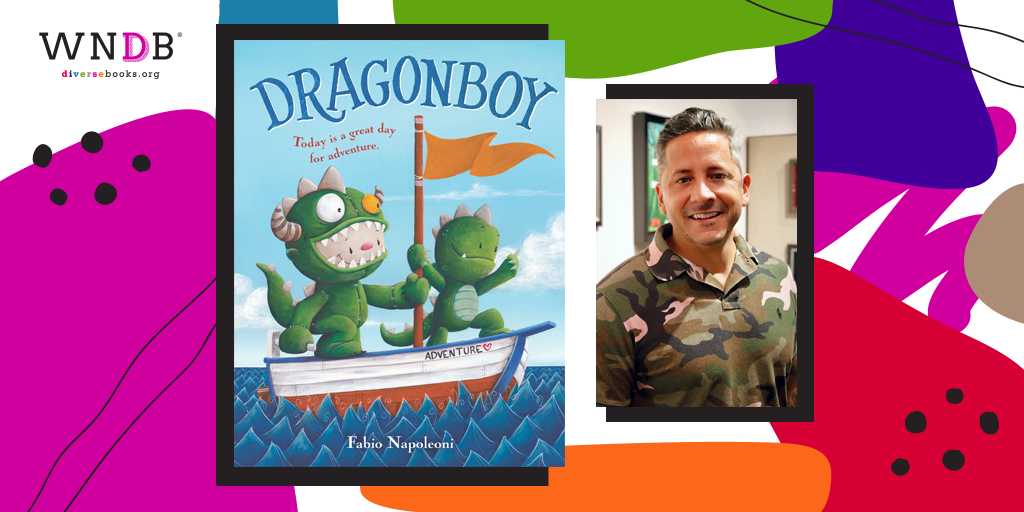 Today we’re pleased to welcome Fabio Napoleoni to the WNDB blog to discuss Dragonboy, which came out this week. 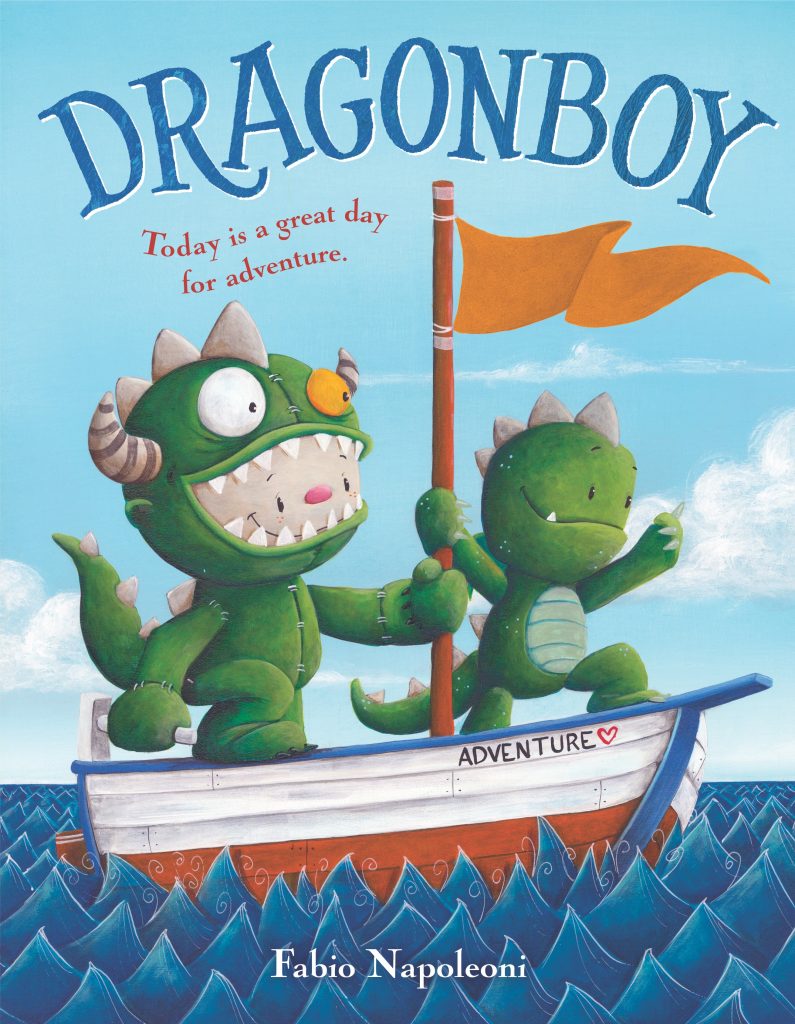 I have a soon to be 23-year-old son whose name is Marcus and he is our first child. He just had a very creative imagination. He would play off on his own. If his mother and I were busy, he would just sit on the couch and talk to his toys and things like that. We didn’t think anything of it, as I think that’s a healthy thing for kids to have—an imagination and to be able to entertain themselves and not just be, you know, sitting there always waiting for something to happen.

He would go places with my mother and he would always bring Draco; that’s where his imaginary little dragon comes from. So I stay true to that because that’s what he would call himself, Dragon Boy, and Draco was his imaginary friend. If my wife was here, she would tell you: multiple times she had to turn the car around and go back to Walmart and pretend it’d be picking up Draco, waiting for them outside, no matter how hard she tried to convince Marcus that he was in the car. That’s the imagination our son had and he still continues to have today. I mean, he’s in school for game programming and things like that.

This book is about the power of our imagination, child-like sense of wonder, and celebrating who we are. What are you hoping young readers will take away from this story?

It’s a great question. What I hope is acceptance and that you can be comfortable in who you are, how you were born, how you choose to live your life. That’s pretty much what it is. You know, he’s a little boy, he knows who he is, he gets up in the morning, he puts on his little suit as his world comes to life, and he’s very comfortable in that. Whether you believe it or not, that is who he is.

Do you have any suggestions on how adults can boost and encourage the themes in this book with their kids?

If I were to suggest anything: just let kids be kids. My mother did that for me. Growing up with asthma and wanting to draw, I never heard my mother say, “Don’t follow this” or “You’re not going to turn that into a job”, “That’s not a real job”. She let me and my brother be creative. Let us do what we want to do and we will find our path along the way eventually.

In Dragonboy’s world, what kind of animal would you be?

I would probably guess Draco by the spontaneous things, unable to focus on one task at a time; that is a hundred percent me. I have three or four things going on at the same time, and I can’t sit still.

This story is also about discovery, what’s one book or movie you wish you could experience again for the first time?

If we’re going to be a child, I love 20,000 Leagues Under the Sea with Kirk Douglas. There’s just something about that whole theme of the water exploration, and the Kraken coming out. As a young teenager, I really enjoyed Sixteen Candles and The Breakfast Club. As you’re growing up,  you’re finding who you are and I think John Hughes nailed it with movies like that. 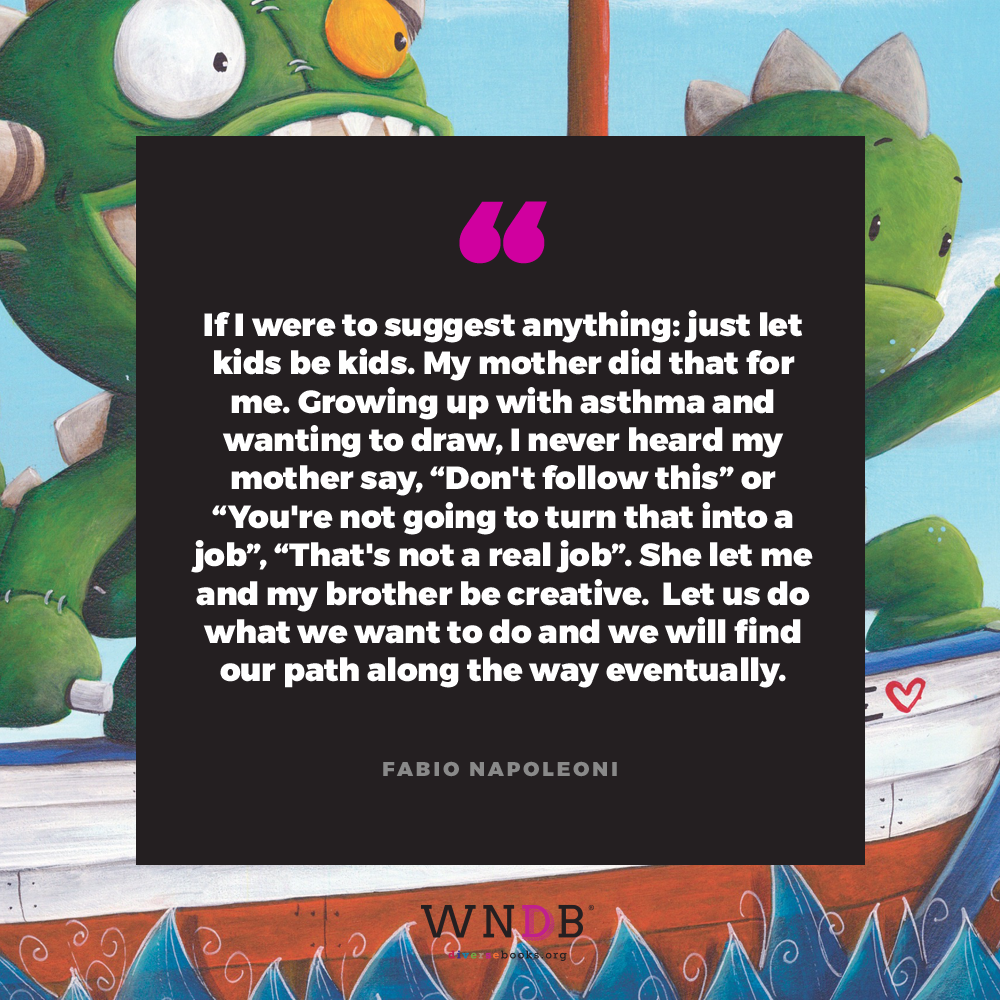 In the story behind your work you talk about how much you enjoy meeting people and hearing their stories about life and art. How has the pandemic shifted those interactions? How has it affected your art?

That is a stellar question. I know that I have plenty of artist friends who have found the break very welcoming because, you know, it sort of gets you grounded back, it gives you the ability to explore a little bit, try things that you weren’t able to do. There’s a certain amount of us that just continuously travel from one gallery to another and it never really gives you the time to sit at home and work on stuff. But for me, I enjoy talking to people, so it was like my fuel was cut off for a year. That’s kind of what it felt like to me.

I personally lost a friend of ours, and that’s the person that hit, so my wife and I, when everything was locked down in Florida, we didn’t know what to do. No kidding, we sat around for about six weeks and it felt like it was forever. Then finally we’re like, “Let’s do a release; let’s do a piece.” From that point, it felt like my career took a six-week break and then we were back to doing virtual shows. I was doing “learn to draw” lessons on Sundays. I became a professional bartender last year. But I really miss the interaction with people because that’s my fuel. I enjoy creating something. but I enjoy equally as much or even more listening to someone else’s interpretation of how they receive the piece. I missed that, and I think my first in-person show will be in three weeks from now in California. So we’ll see how that goes.

In that video, you also mention that this career found you. Do you have any advice for people who are waiting or seeking their calling?

There’s a great quote—I don’t know if it was by Jay-Z or Snoop Dog—it was about if you chase the money, you’re never going to catch it. And it’s about chasing your path in life, and I never chased it. I always felt that if I did, I may get disappointed with what I find at the end of it, or maybe it isn’t what I wanted. So I work hard at what I do. I enjoy it. I think that’s key number one. I think if you do it for an honest reason, then it’s going to reward you in an honest way. That’s the one piece of advice, I would say pursue something that you enjoy and just keep pursuing it and putting it out and someone’s gonna like it, someone’s gonna reach out to you, and then you just never know where you go from there. Don’t let opportunities go by you because opportunities are like a fast car: you see it coming and if you don’t hop on it, you don’t know if it’s going to come back around. And a majority of the time they don’t.

Fine artist Fabio Napoleoni is best known for creating Marcenivo, a character he began drawing during the many months his infant daughter was battling a life-threatening heart condition, as well as his long-adored Dragonboy, a character based on his son. Fabio has also used his art in his seven years working with troubled and abused children before becoming a full-time artist. He has long been inspired by the multicultural street graffiti of New York City, as well as the colorful landscapes of Maine, and he invites you to visit him online at fabionapoleoni.com and on Instagram @fabionapoleoni. Born in Puerto Rico, he now lives in Florida.

is a Mexican morenita who loves books and musical theater. She is currently at Caffeine Book Tours, as a marketing assistant. She runs a book club called Accidentally in Love, dedicated to reading adult romance books by marginalized authors. She is also the organizer of LHM Book Fest, a month-long event dedicated to uplifting Latinx voices in literature, and Virtual Indie Book Fest, a virtual festival to boost indie authors.

Previous Post: « Q&A With Katie Yamasaki, Dad Bakes
Next Post: Cover Reveal for Valentina Salazar Is Not a Monster Hunter by Zoraida Córdova »
The #BooksSaveLives auction is now OPEN! Thanks to