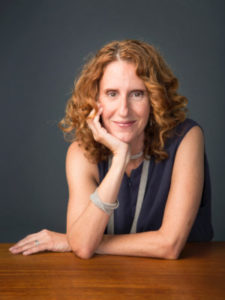 At the Gaithersburg Book Festival, Alex Rah interviewed Gayle Forman on behalf of We Need Diverse Books. Gayle is a journalist and the author of many young adult novels, including IF I STAY, JUST ONE DAY, and most recently I HAVE LOST MY WAY.

I would say that I Have Lost My Way was definitely the most challenging to write because it took a while to get to it. It was the result of seven different projects that crashed and burned, and I was starting to think that I couldn’t write anymore. This thing that I’d always done, that sort of brought me comfort and also was my job, and so I kept thinking to myself: “I have lost my way.” After a few months of muttering to myself in this character, Freya comes into my head, and she is whispering it, so that’s how the book started, and so there was this difficulty even getting there. Structurally, it’s three different character points of view in the present tense and past tense, which was also very challenging.

Yeah. In most of my books, I always say that I write about young people, but I don’t write young stories, so I’m writing about stuff that’s going on with adult me, but it’s generally these young people who come to tell the story. And so in this case, he was nineteen years old, so I think it’s a young-adult novel but I think it’s resonant for anybody who has felt lost. 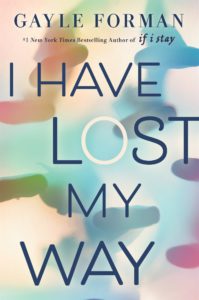 Well, actually, we recorded a song for [I Have Lost My Way] because a lot of my books like Where She Went and If I Stay have a lot of music in them, and I Have Lost My Way, one of the characters, Freya, is a singer. She’s a YouTube pop star sensation who’s recording her debut album, and she loses her voice, so there’s a song in the book called “Little White Dress” that’s a very pivotal song and we decided to record it. One of my best friends is the author Libba Bray, who is also a musician, so she wrote the song and my daughter’s friend, this amazing thirteen-year-old vocalist named Sasha recorded it, so I’ve been saying “Little White Dress”. It’s on SoundCloud if you wanna check it out.

Yeah, I always write my books first and foremost for me, but I definitely seem to have found the younger readers from thirteen into their twenties are probably in my core readership. It’s funny. It came up recently that I don’t think I’ve ever written a novel that’s set in high school. All of my books are either college or sort of not based in school, so I think that it sort of broadens the range. It looks at stuff that happens sort of as you really are transitioning from childhood to adulthood.

I’m actually working on the final polish of a middle-grade novel that I’ve been working on and off on for a couple of years. It was really hard to get the voice initially, which was interesting because when I started working on it, my older daughter – who is now thirteen – was ten, which is the age of the characters, and I couldn’t get the voice, so that was the first book that I think I’d tried writing in third person because it helped me access that voice. I couldn’t do that voice in first person.

That’s a good one. Living or dead? I would kind of like to have lunch with Shakespeare because I want to see what it’s really all about. There’s so much mystery about the man. One of my books has a bunch of Shakespeare in it, and there was some quote that I stole from an academic saying. There’s nobody as well-known and as unknown as Shakespeare, aside from Jesus.

I’ve been asked this before, and I would want a blank book, a very large blank book and an endless supply of writing utensils.

I’ve just been thinking about this a lot because it’s four years now since that BookCon where it all happened, and I Have Lost My Way is my first young adult novel in three years. It’s also my first young adult novel that features two of the three characters as diverse characters, which is sort of a direction that I’ve been tippy-toeing in for a while. The real shocking change for me was going to these conferences, and not just seeing who was there represented as authors but who was coming out to these conferences – because it was readers I had not seen before. That can happen in four years.

Then seeing some of the structural changes that have been happening at the publishers because of We Need Diverse Books is incredible. That’s the kind of thing. When you change the structure, you change things long-term. So I think more on the publishing side. I think that when publishing as an industry represents what America looks like, when you see the demographics of it mirroring the demographics of the country, I think then that would really be, I don’t want to say effortless, but it would be natural that the books themselves sort of also reflect them.

Previous Post: « Q&A with Madelyn Rosenberg and Wendy Shang
Next Post: Q&A with Hena Khan »
Applications are open for Literary Agents of Chang