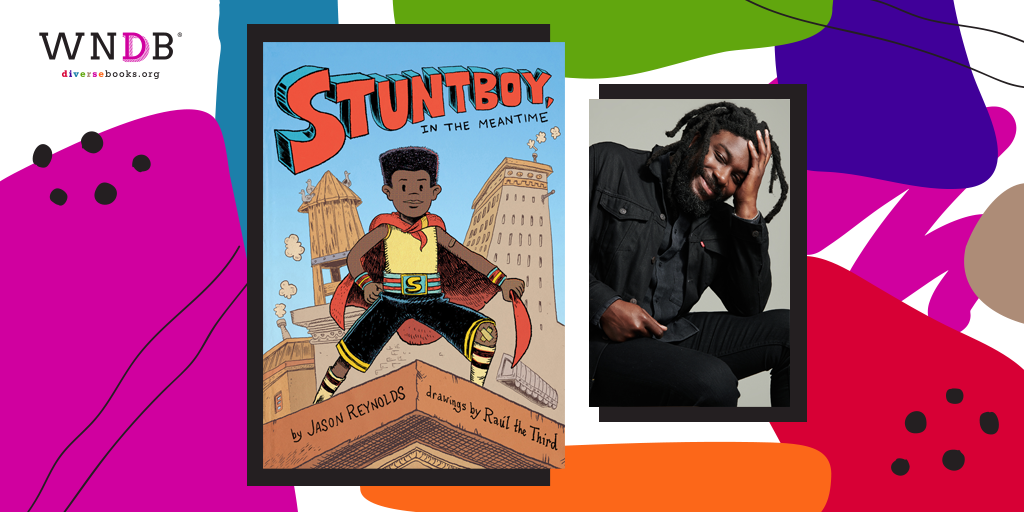 Today we’re thrilled to welcome Jason Reynolds to the WNDB blog to discuss Stuntboy, in the Meantime.

Portico Reeves’s superpower is making sure all the other superheroes—like his parents and two best friends—stay super. And safe. Super safe. And he does this all in secret. No one in his civilian life knows he’s actually…Stuntboy!

But his regular Portico identity is pretty cool, too. He lives in the biggest house on the block, maybe in the whole city, which basically makes it a castle. His mom calls where they live an apartment building. But a building with fifty doors just in the hallways is definitely a castle. And behind those fifty doors live a bunch of different people who Stuntboy saves all the time. In fact, he’s the only reason the cat, New Name Every Day, has nine lives.

All this is swell except for Portico’s other secret, his not-so-super secret. His parents are fighting all the time. They’re trying to hide it by repeatedly telling Portico to go check on a neighbor “in the meantime.” But Portico knows “meantime” means his parents are heading into the Mean Time which means they’re about to get into it, and well, Portico’s superhero responsibility is to save them, too—as soon as he figures out how.

Only, all these secrets give Portico the worry wiggles, the frets, which his mom calls anxiety. Plus, like all superheroes, Portico has an arch-nemesis who is determined to prove that there is nothing super about Portico at all. 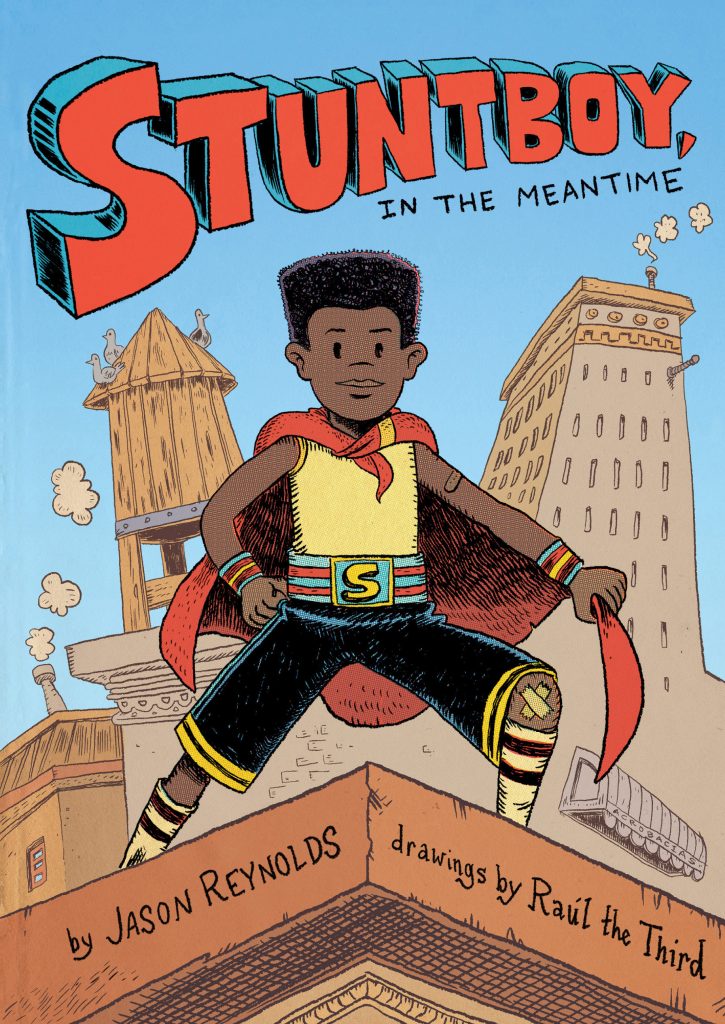 What inspired you to write Stuntboy, in the Meantime?

I’m a child of divorce and all my friends are children of divorce. We all grew up in families where the marriages and relationships changed. We were forced to understand what that meant for our lives and sometimes that was really complicated. I know that there are a lot of kids and parents who are going through it and we don’t always know what to tell our kids. Kids don’t always know what to do with the pain, fear, or anxiety.

Is there any significance behind the meanings of your unconventional characters’ names like Portico Reeves, Frisbee Foster, A New Name Every Day?

I grew up in a community and household where everybody had a nickname. It was a part of my life and family dynamics. Everyone was called something other than their name. Like for Frisbee Foster, it’s not Frisbee Foster’s name, but Frisbee Foster is treated like a frisbee. There’s no reason for us to know what Frisbee Foster’s real name is because no one calls Frisbee Foster by anything other than Frisbee Foster. My mom worked in the school system and it would be funny because sometimes she would ask kids their mom’s name and they would say her name is “Mom” since that’s what they call her. It’s that kind of thing. And for Portico Reeves, I wrote this story completely different before it became Stuntboy and that was the original name of the character because the original mom was an architect. A portico, as you know, is an archway and I just kept the name because I think it’s just a cool name.

I loved how you added a personal element to the main character’s story, especially about his parents fighting and Portico’s anxiety. Why did you decide to add this aspect and element into the storyline?

I was a kid with anxiety. A lot of kids have anxiety and you don’t always know what to do with it. There’s nothing wrong with anxiety. I think we should just normalize the mental challenges we have sometimes. I don’t think there’s anything wrong with being anxious and being afraid. I think it’s a natural part of who we are as human beings. It’s a very real thing.

I know you write a lot of books for young people and Stuntboy, in the Meantime is one of them. In a previous interview, you said that young people are “the most human parts of our humanity.” Can you expand on this and the reason behind why you try to engage with younger readers?

Young people still believe that the world is a changeable place. What happens to some of us older folks over time is that life tends to beat on us a little bit and we forget that. The truth is that the world is a changeable place. The world is changeable. It has been changed. We’ve seen that. It’s changing at the moment. Thoughts get so bogged down with life’s bruises, jobs, children, divorce, and all the things that are happening around us that we forget that what young people still remember is that we live in a world where we can mold. We live lives that we can mold. I think young people today know more than anybody. I feel like young people do what they want to do, be who they want to be, live the way they want to live, and everybody is just going to have to deal with that. There’s something about that type of autonomy, control, and desire that I’d rather be around. I don’t ever want to forget that I too have control over this life and that I too get to mold this life. It’s my choice. I think young people still got that moxie and ego. 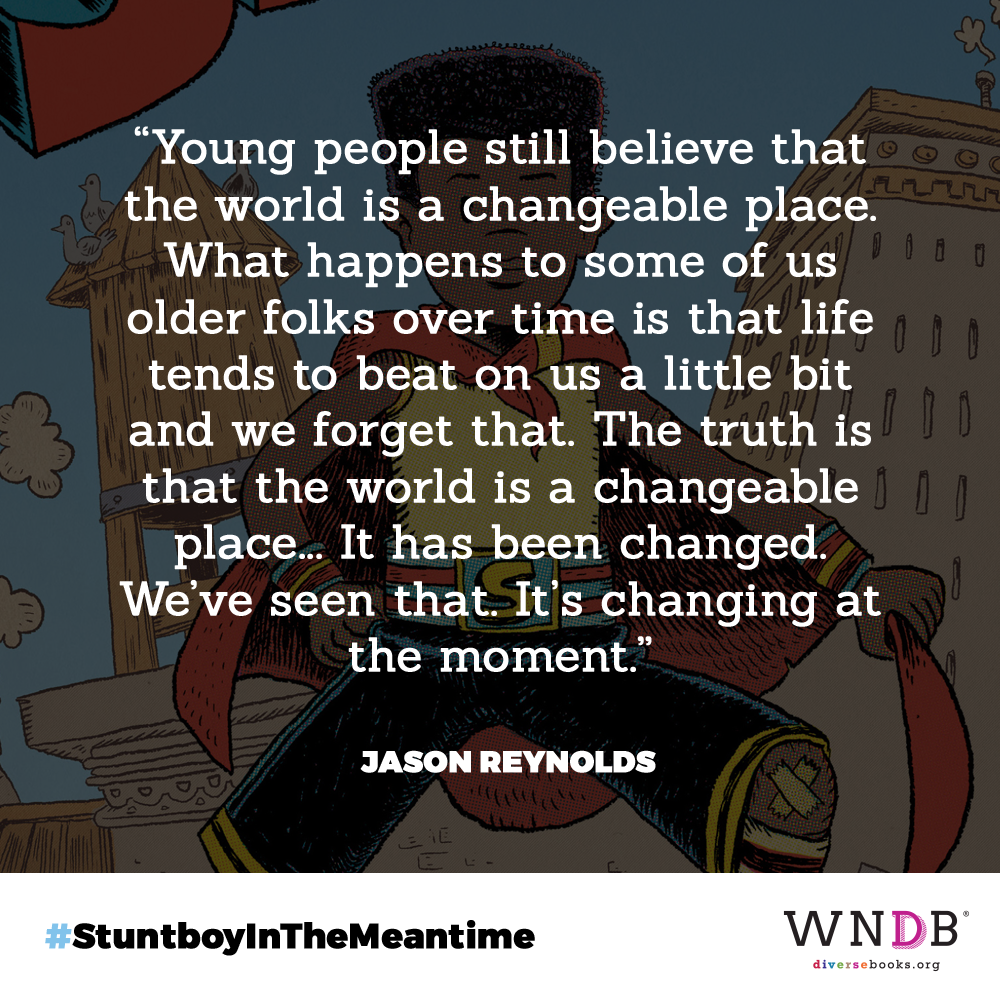 What message do you want your readers to take away from your book?

No messages. None of my books have intentional messages. I’m not a teacher and I’m not even a parent. My job isn’t to teach you anything. My job is to say “I see you.” That’s all.

Are you working on any future projects or upcoming books and if so, can you tell us about them?

I have another book coming out in January called Ain’t Burned All the Bright. It’s a book that I wrote with my buddy, Jason Griffin. It’s about 2020. It’s a meditation on a year we all felt we were suffocating and about where one finds an oxygen mask. And the answer I hope we all learned is that the oxygen mask is often found in the simple, mundane parts of our lives that we’ve taken for granted for so long. It’s like, “Do you really hate your younger brother? Do you really hate him?” Because in the moment when he’s sitting next to you on the couch, this is all you have. We are forced to really grapple with the small, normal, and boring parts of our lives and how actually, that’s maybe where all the special stuff is.

There’s a new Black Boy Joy book which I think is just a beautiful book. It was number 1 in the New York Times best sellers. Dhonielle Clayton also has a new series called The Marvellers coming that I think is going to be pretty special.

What’s one question you wish you were asked more often (and the answer), or something you would like to mention?

Ultimately, the one thing I want to make sure people know about me is that I really love the younger generation. I have a lot of respect for them. Our thoughts have a way of making young people feel so small. A lot of the things we’re concerned about have nothing to do with the younger generation and everything to do with that they’re just teenagers. We’re always like, “Young people are so entitled. They don’t do anything. All they want to do is get on social media and be on their phones.” I hear this all the time and I think to myself, “That’s not because they’re not amazing at the core, but it’s because they’re 16.” Why do they have to be everything at 16? They might not have all the answers, but as long as they are fully aware, engaged with the problem, and trying to figure out what their place is in it at this particular moment and in the meantime, they can go ahead and do this TikTok dance because they’re 16 and they deserve that. I think adults should sometimes sit back and say that it’s okay for both of those things to exist in the world. As long as at the core of the younger generation, I see focus and that’s what I truly see. I want all young people to know that there are some of us out here who can actually see them and know that in 10 years, they all will probably and hopefully shift the world.

Jason Reynolds is a #1 New York Times bestselling author, a Newbery Award Honoree, a Printz Award Honoree, a two-time National Book Award finalist, a Kirkus Award winner, a two-time Walter Dean Myers Award winner, an NAACP Image Award Winner, and the recipient of multiple Coretta Scott King honors. He’s also the 2020–2021 National Ambassador for Young People’s Literature. His many books include Stamped, When I Was the Greatest, The Boy in the Black Suit, All American Boys (cowritten with Brendan Kiely), As Brave as You, For Every One, the Track series (Ghost, Patina, Sunny, and Lu), Look Both Ways, and Long Way Down, which received a Newbery Honor, a Printz Honor, and a Coretta Scott King Honor. He lives in Washington, DC. You can find his ramblings at JasonWritesBooks.com. 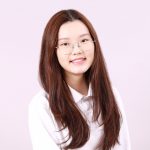 Yeonwoo Shim is a student at Vanderbilt University who hopes to increase accessibility and diversity in children’s literature. Coming from an Asian-American immigrant family, she grew up seeing a lack of diversity in the books she read, but hopes that through WNDB, she can help more diverse characters come under the spotlight.

Previous Post: « Lessons From a Teen Book Club and a Girl Named Angie
Next Post: Roots in Iran by Yasmine Mahdavi is a Textured Tapestry of Strong Iranian Women »
Applications are open for Literary Agents of Chang