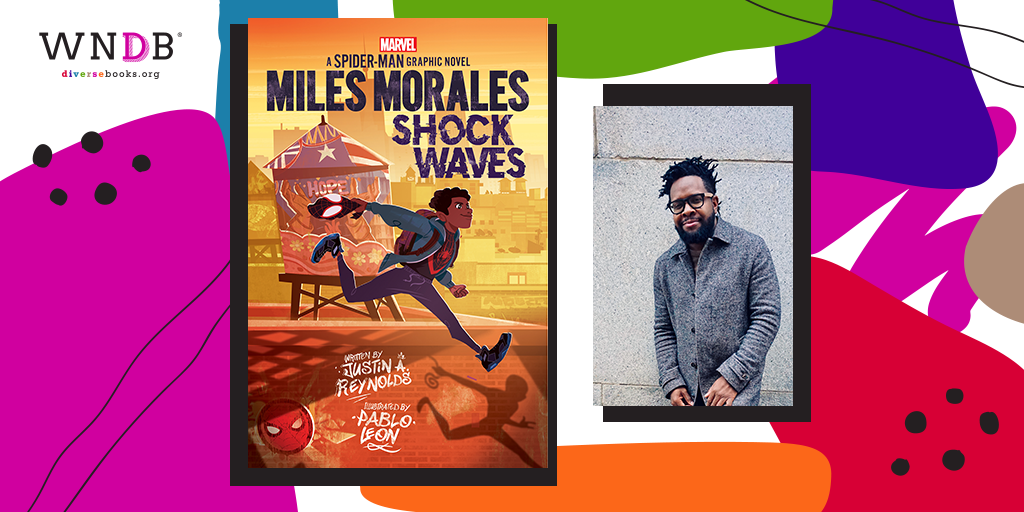 Miles Morales is a normal school kid who happens to juggle school at Brooklyn Visions Academy while swinging through the streets of Brooklyn as Spider-Man. After a disastrous earthquake strikes his birthplace of Puerto Rico, Miles springs into action to help set up a fundraiser for the devastated island. But when a new student’s father goes missing, Miles begins to make connections between the disappearance and a giant corporation sponsoring Mile’s fundraiser. Who is behind the disappearance, and how does that relate to Spider-Man?

A true middle grade graphic novel that just happens to star one of Marvel’s most popular characters, exciting new voice Justin A. Reynolds (Opposite of Always) creates a riveting story that will connect with new and well-versed comics readers alike. 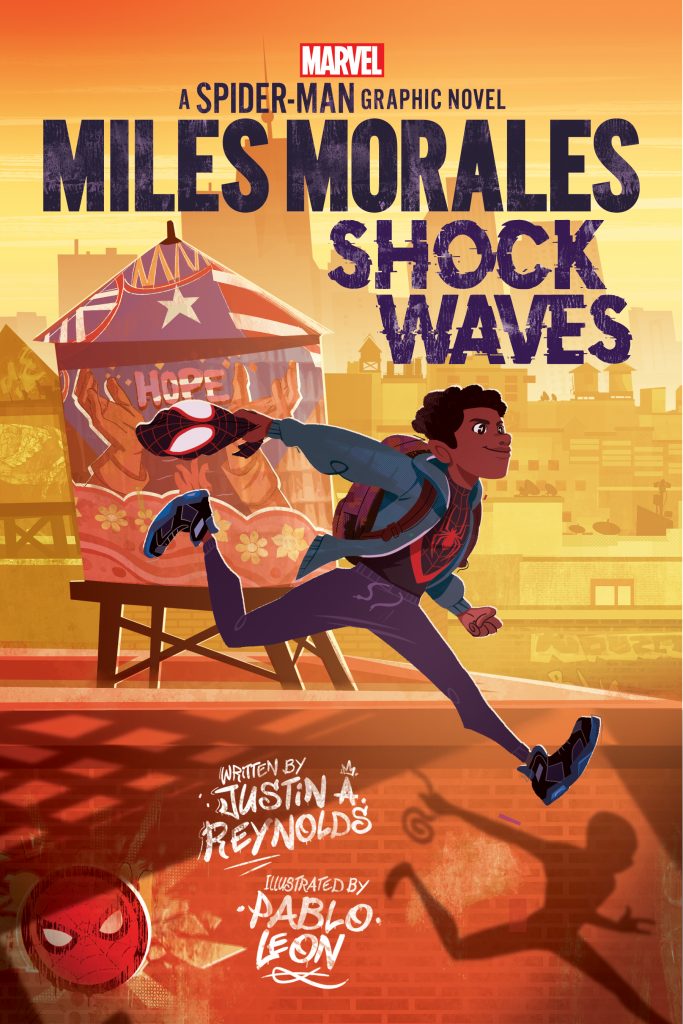 Opposite of Always and Early Departures are both fast-paced YA contemporary novels, although with sci-fi and time travel twists. What made you want to take on a middle grade graphic novel?

I love young adult stories, but middle grade has always held a special place in my storytelling heart. I think it’s the age where your curiosity and imagination are both so very powerful, and where you’re beginning to truly consider your own identity and place in this world. It’s a fun age.

Were you a Miles Morales or Spiderman fan before? Did that make it easier or harder to write this?

Definitely! I’ve always been a huge Spider-Man fan. The funny quips, web-slinging all over town, the ability to walk on ceilings, what’s not to love? But Miles Morales is absolutely my favorite superhero; as an Afro-Latinx kid from Brooklyn with a deep appreciation for the cultures that have raised him, I can’t imagine a better superhero representative for our modern world. My Miles/Spider-Man fandom made it easier to write Shock Waves because I was so excited to inhabit this world, but of course, I was nervous, too. I wanted to make sure I got it right.

Did you have to do any research on the Miles Morales universe? What new aspects of Miles did you get to bring to the table in this graphic novel?

Let’s see, I re-read every Miles Morales comic for starters. I’ve seen Into the Spider-Verse a gazillion times but still watched it again because it’s one of the best movies ever made. I scoured the internet for every bit of Miles Morales trivia I could find. Plus, I had the Marvel team supporting me, which was awesome. In Shock Waves, I wanted to dive into Miles’s rich cultural heritage, and showcase his love for his family and his community. I also wanted to highlight his love for art, and thanks to the amazing artwork of Pablo Leon, we were able to do that. All in all, it was important to me that we show how well-rounded of a human Miles is, but also that we emphasize regardless of these incredible powers and responsibilities, at the end of the day, he’s still an awkward, fun-loving kid, too.

Miles Morales: Shock Waves touches on the reality of the devastating impacts of natural disasters on Puerto Rico, but also on what we can do to create meaningful change. Why did you want to bring that into this story?

I wanted to give Miles an obstacle that, on its surface, he found impossible to overcome—even with incredible powers and a desire to help people, Miles can’t reverse the catastrophic effects of an earthquake. So much of life can feel this way to all of us; we want to help but we’re not sure if our efforts can truly make a difference. Miles finds several ways to still impact change in his community, help his family, and offer much-needed relief to the beautiful people of Puerto Rico. Which is to say, no matter how small our contributions may seem, they add up. They matter.

From a craft perspective, what was the most unexpected challenge of working in the graphic novel format? What did you love most about it?

It was a challenge to provide the art direction for each panel; especially because Pablo Leon is such a talented artist, I wanted to leave him space for his creativity to shine. But we found an amazing groove together, and I think that’s one of the things I loved most, was the collaboration—with Pablo, with my editors, and with the entirety of the Marvel and Scholastic teams. 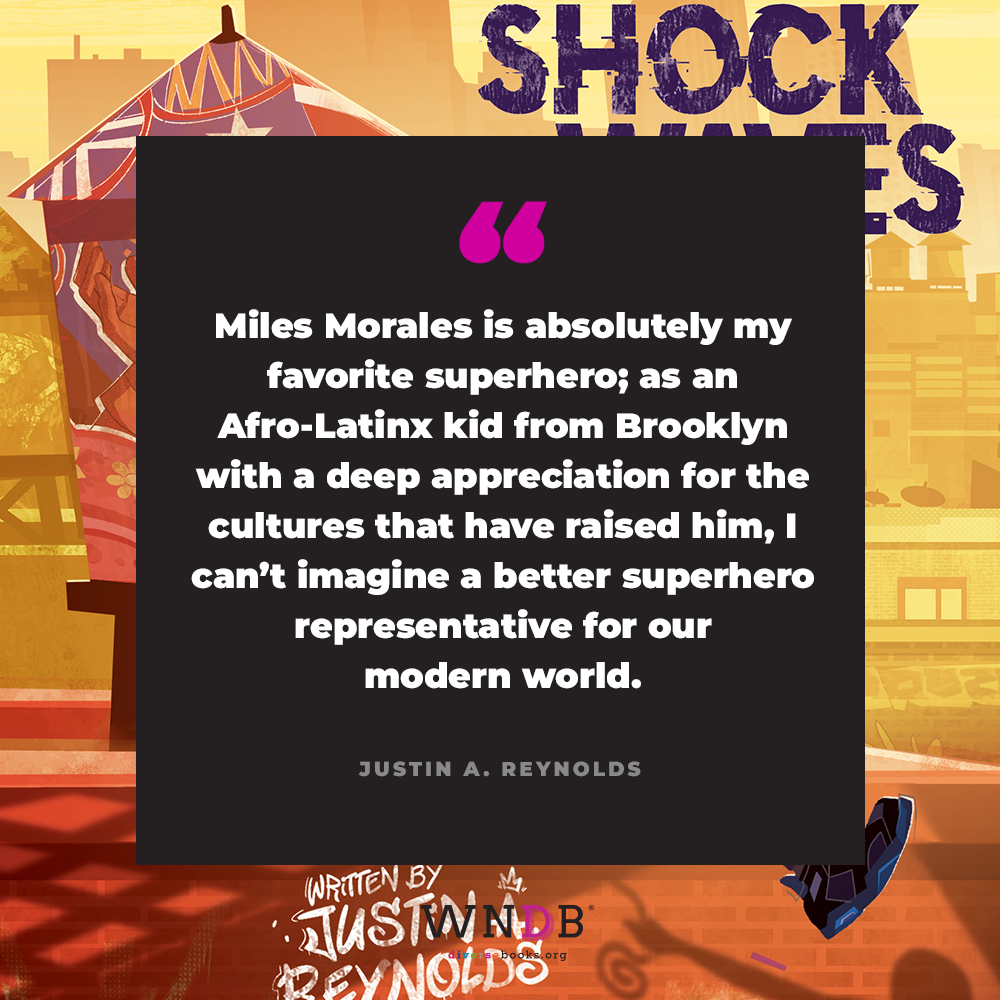 What was it like working with Pablo Leon on the illustrations? What are your favorite aspects of how his art brought the story to life?

Collaborating with Pablo was amazing. He’s a brilliant artist with an incredibly vivid point of view, and his passion for storytelling is infectious. He’s so bold in his work; he’s not afraid to take creative chances and I think all of those risks paid off. The art is fantastic.

If you could design your dream panel to promote this book, what would it be about? What other authors might you want to have on it with you?

Great question. I’d love to talk about the great power that young people have right now. All of us wish we could be Miles Morales, all of us want to be superheroes, but the reality is there are plenty of real-life heroes in our communities. There are so many incredible young people who are working as activists, whether they’re promoting social justice and equality, or bringing awareness to climate change and advocating to protect our Earth from waste and pollution. As for authors I’d invite, I’d have to go with the super talented Nic Stone, author of the Shuri series, and the equally talented Jason Reynolds (no relation haha), who gave us Spider-Man: Miles Morales.

What other books do you think Miles Morales: Shock Waves is in conversation with? And do you have any recommendations for other published or forthcoming kidlit?

I think Shock Waves is in conversation with any book promoting diversity, cultural awareness, and understanding of self and community. Miles isn’t just a superhero who swings through the streets in a cool costume, he’s also working in his community to improve the quality of life for everyone. Any book emphasizing compassion, empathy, and outreach will be right at home with Shock Waves. As for recommendations, I’m super excited for Lamar Giles’s next Legendary Alston Boys installment, The Last Chance for Logan County; it’s out this fall. And of course, I can’t wait for the Shuri (Roseanne A. Brown) and Kamala Khan (Nadia Shammas) graphic novels, both coming soon from Scholastic and Marvel! 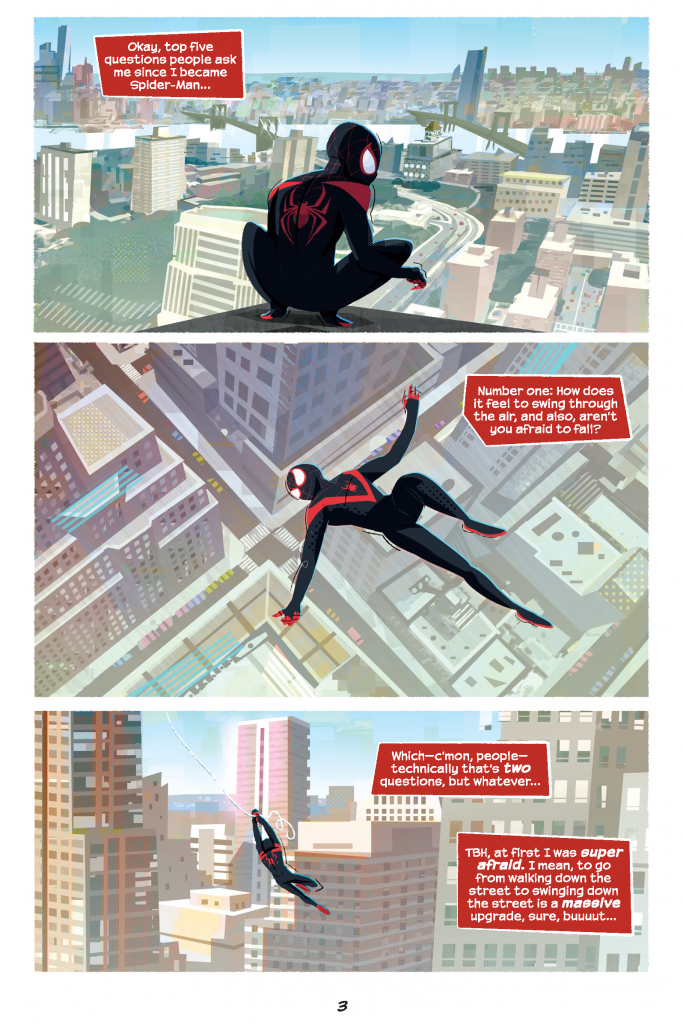 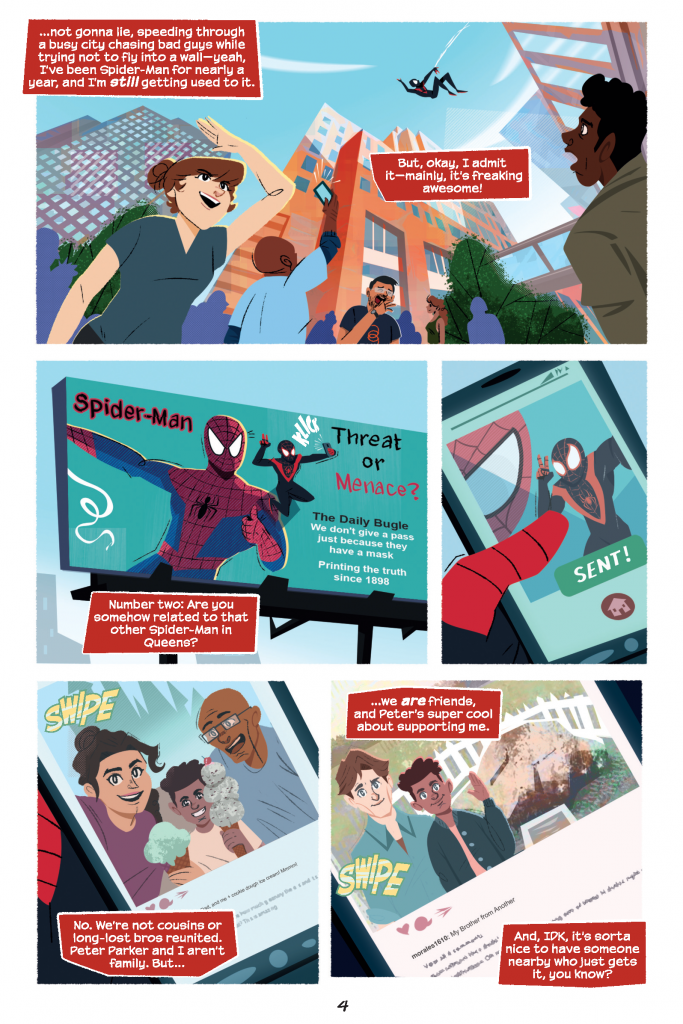 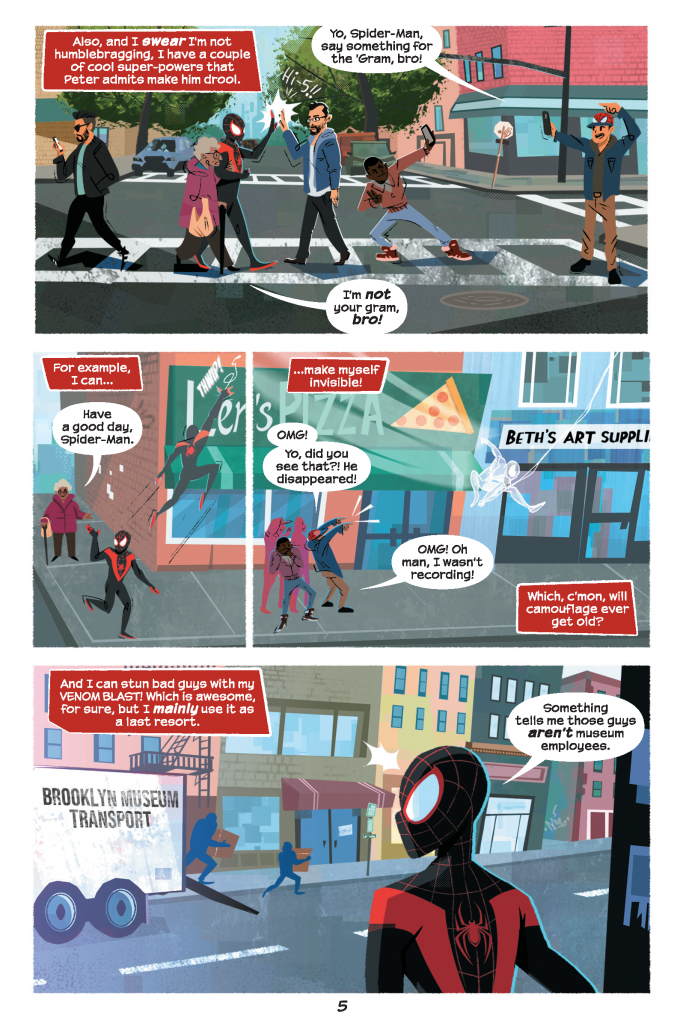 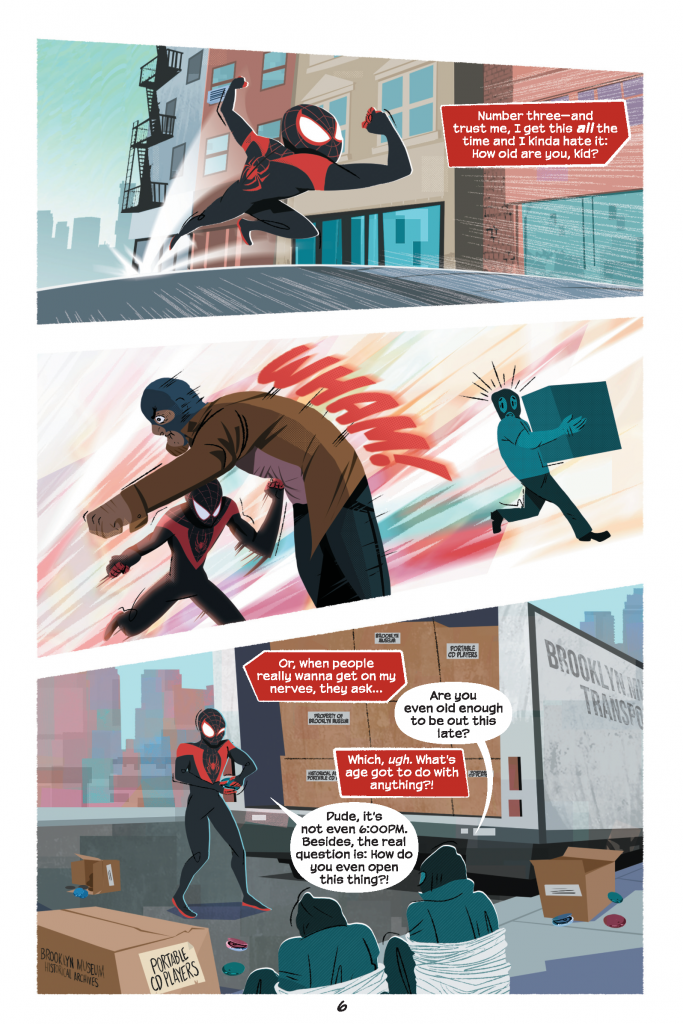 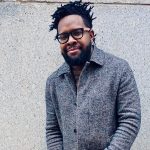 Justin A. Reynolds has always wanted to be a writer. Opposite of Always, his debut YA novel, was an Indies Introduce Top Ten Debut, a School Library Journal Best Book of 2019, translated in 19 languages, and is being developed for film by Paramount Players. His second YA novel, Early Departures, published to critical acclaim and was a Kirkus Reviews Best of 2020. Justin is the co-founder of the CLE Reads Book Festival, a Cleveland Book Festival for middle-grade and young adult writers. He hangs out in northeast Ohio with his family and is probably somewhere, right now, dancing terribly. That, or maybe sportsing. You can find him at justinareynolds.com.

Previous Post: « Faridah Àbíké-Íyímídé Talks Inspirations for Her Blockbuster Debut Ace of Spades
Next Post: An Emotion of Great Delight by Tahereh Mafi Is About Containing Multitudes »