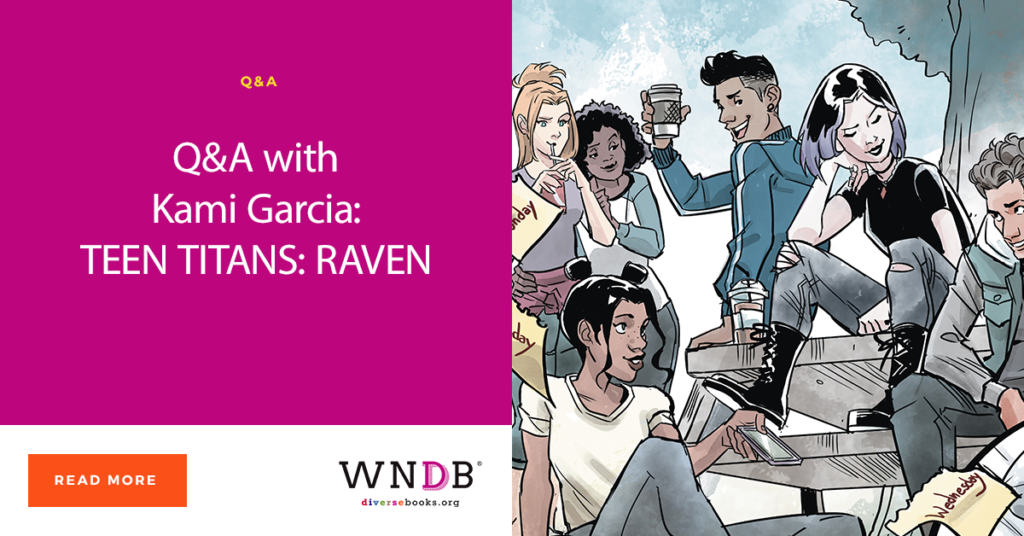 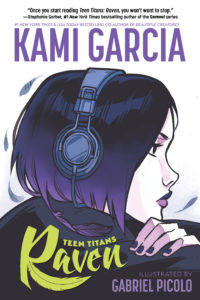 When a tragic accident takes the life of seventeen-year-old Raven Roth’s foster mom—and Raven’s memory—she moves to New Orleans to live with her foster mother’s family and finish her senior year of high school. Starting over isn’t easy. Raven remembers how to solve math equations and make pasta, but she can’t remember her favorite song or who she was before the accident. When strange things start happening—things most people would consider impossible—Raven starts to think it might be better not to know who she was in her previous life.

But as she grows closer to her foster sister, Max, her new friends, and Tommy Torres, a guy who accepts her for who she is now, Raven has to decide if she’s ready to face what’s buried in the past…and the darkness building inside her.

What was the process like of working on your first graphic novel? How was it different from writing a traditional novel?

For me, it was really fun. I actually majored in fine arts at George Washington University and then changed my major to education and ended up becoming a teacher. Since I wanted to be an artist, I have such an appreciation for it. The idea of writing where I knew I’d have art to go with the story was so exciting. I was so excited to write something and then see it become a graphic novel. I write very tight and then when I turn it into an editor, I usually have to add. In a graphic novel script, you’re only writing the bones and the pivotal scenes and crucial character moments. So it was a very fun, natural transition.

What was the process like collaborating with the illustrator, Gabriel Picolo?

It was amazing. I’d seen his work on Pinterest and showed it to DC. He hadn’t done a graphic novel before but he’d worked for traditional publishers doing illustration work. We had a layout artist so that could bridge the gap because he and I were both new at this.

One of the things that attracted me to his work is that Raven and the Titans were in regular clothes; they weren’t in costume. He knew I already loved the aesthetic and the way he was drawing the characters. Raven was absolutely recognizable as a character. It was so fun because we hit it off right away. We had a shared Pinterest board. 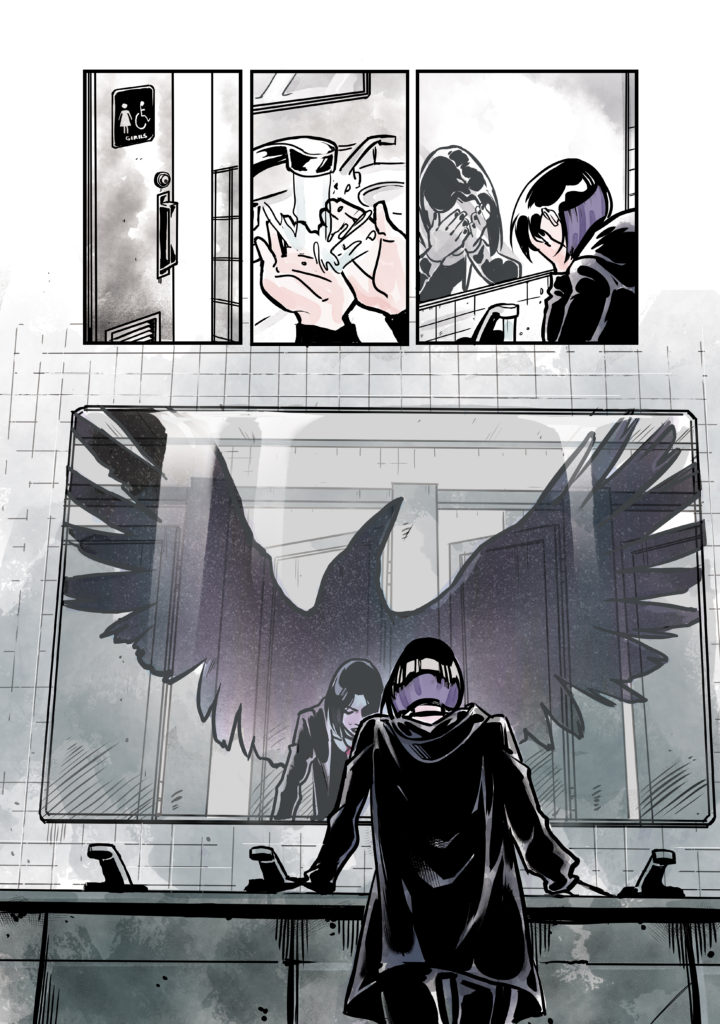 Why did you want to bring Raven’s story to readers, and why in this format?

DC approached me about doing a graphic novel. Raven has always been a character that’s easy for me to connect with because she’s kind of struggling with her identity, with the idea that we all have good in us and a dark side—and how to navigate that. I find that there’s a kind of universal concern with teens of, “If my parents are a certain type of person, does that mean I have to be that way?” It’s the natural time when they’re trying to break away and become their own person. That becomes more complicated when you have a parent who isn’t a great person because a lot of kids then question: Does that mean that I’m that way?

I feel like that’s important because I want kids to know it doesn’t mean that and Raven is the perfect character for that because she’s not perfect. A lot of times with female characters, we present teen girl characters who are so strong and have a warrior spirit from the beginning. But a lot of girls don’t know that they have this strong warrior inside of them. They’re scared or shy or they don’t feel brave. And it takes a certain event for them to find their inner strength. I wanted to write a character who I knew was strong, but she doesn’t know she’s strong or what she’s capable of. I wanted the reader to be able to watch her find her own inner strength.

How can graphic novels make stories more accessible to some readers?

I used to be a reading specialist. Graphic novels allow readers to read a more complex story. A graphic novel gives them context as they’re reading. With a graphic novel, the art supports what’s going on on the page. It might allow someone to read something harder, more complicated. I have used graphic novels of Shakespeare plays with students who were not ready to read Hamlet on their own. I would read the graphic novel with them first so they’d have an understanding of the story. It was amazing how much more they got out of it when they could see what was happening.

Graphic novels give us an opportunity to level the playing field to really give access to many different types of readers. The diversity piece is also very important: A graphic novel is literally a visual way to let the reader see themselves on the page.

It was very important to me to not only show a lot of different types of kids in the book. My kids are half-Cuban. Some of my characters are biracial. I want my daughter to be able to see herself in a book. I want every reader to feel that. I wanted kids to be able to open the book and find someone they can personally identify with.

A lot of the book is not in full color, but I wanted readers to know that all these characters are not white. We came up with the idea that the first time we introduced the main characters, we would show them in color. DC recolored the book because we really wanted the skin tones to be more authentic. I used visual cues throughout so that the reader can’t default white.

Gabriel was so on board and everyone at DC was so on board, and that was one of the things that made me most excited about the project. A lot of places talk about being committed to diversity and representation but when push comes to shove, they’re not. But DC really backed up what they promised and that’s why I was so excited for this book to come out. 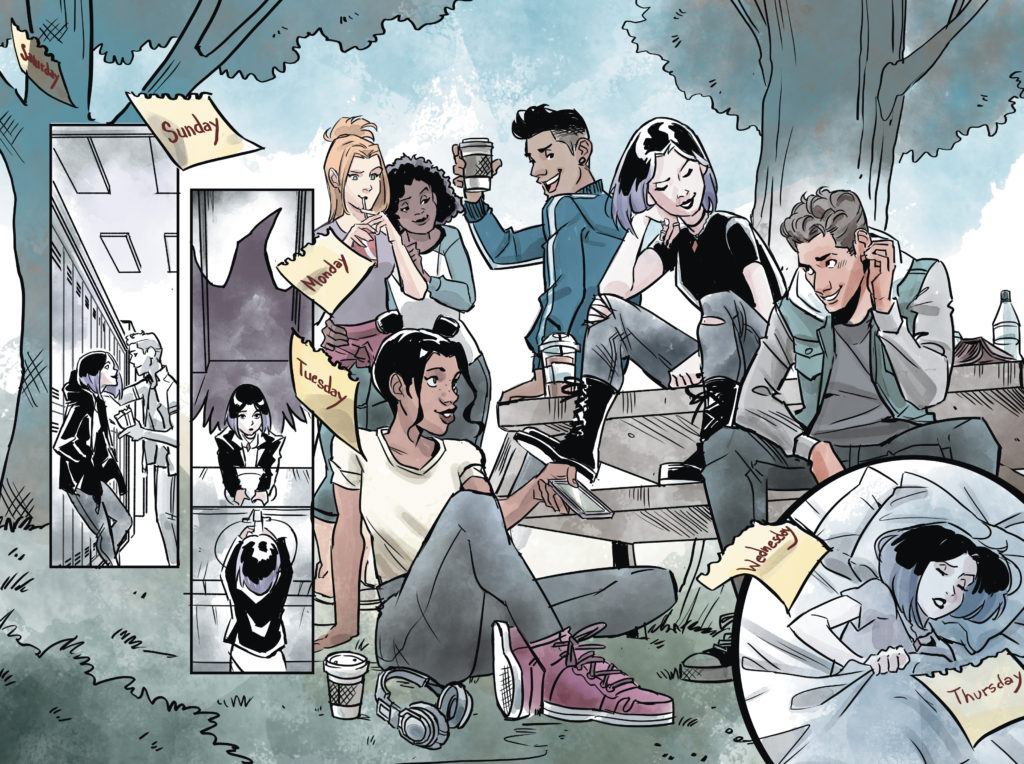 You’ve worked in several different genres now, including graphic novels. What is it like writing for these audiences? What are some things you find are the same across genres and what differs?

A tight plot, engaging characters, and lots of twists are a must for anything I write. As I mentioned, I’m not a fan of writing transitions or tons of details unless they relate to a cool setting or an exciting part of the story. I love writing dialogue, conflict, emotion, and character-revealing moments. Graphic novels involve writing all the elements I love. The art does the heavy lifting on the other fronts. I also love collaborating when I write.

Are there any other graphic novels out already or coming out that you absolutely loved?

I’m very excited to read Shadow of the Batgirl by Sarah Kuhn and Marie Lu’s Batman: Nightwalker. I also love Mariko Tamaki’s work; she has a new book coming out called Laura Dean Keeps Breaking Up With Me. I’m trying to start reading more middle-grade graphic novels even though I don’t write MG. I really love the graphic memoir Spinning by Tillie Walden. Graphic novels are really powerful because you get the visual piece to support the representation in the text.

Previous Post: « Q&A with Alison Gervais: THE SILENCE BETWEEN US
Next Post: Q&A with Angie Manfredi: THE (OTHER) F WORD »