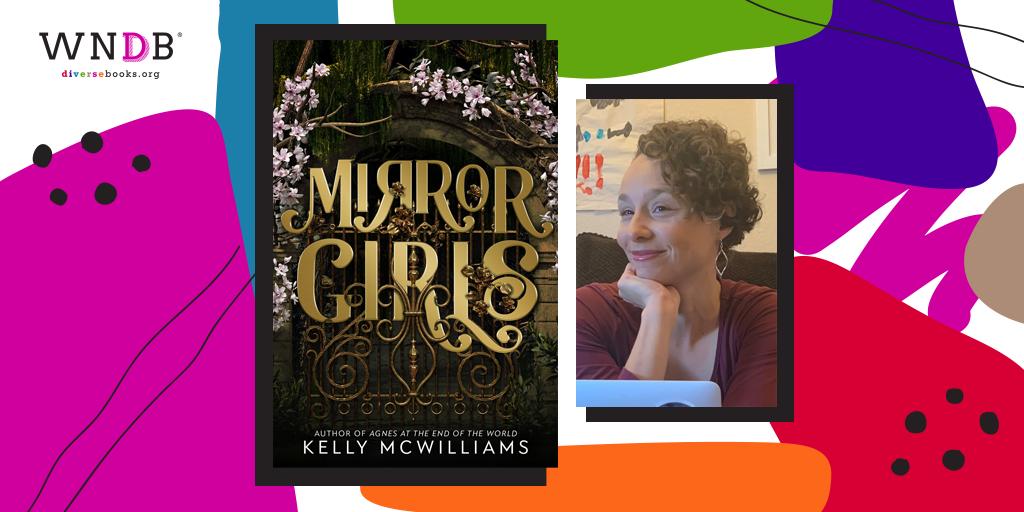 Today we’re pleased to welcome Kelly McWilliams to the WNDB blog to discuss Mirror Girls, which came out on February 8, 2022!

As infants, twin sisters Charlie Yates and Magnolia Heathwood were secretly separated after the brutal lynching of their parents, who died for loving across the color line. Now, at the dawn of the Civil Rights Movement, Charlie is a young Black organizer in Harlem, while white-passing Magnolia is the heiress to a cotton plantation in rural Georgia.

Magnolia knows nothing of her racial heritage, but secrets are hard to keep in a town haunted by the ghosts of its slave-holding past. When Magnolia finally learns the truth, her reflection mysteriously disappears from mirrors—the sign of a terrible curse. Meanwhile, in Harlem, Charlie’s beloved grandmother falls ill. Her final wish is to be buried back home in Georgia—and, unbeknownst to Charlie, to see her long-lost granddaughter, Magnolia Heathwood, one last time. So Charlie travels into the Deep South, confronting the land of her worst nightmares—and Jim Crow segregation.

The sisters reunite as teenagers in the deeply haunted town of Eureka, Georgia, where ghosts linger centuries after their time and dangers lurk behind every mirror. They couldn’t be more different, but they will need each other to put the hauntings of the past to rest, to break the mirrors’ deadly curse—and to discover the meaning of sisterhood in a racially divided land. 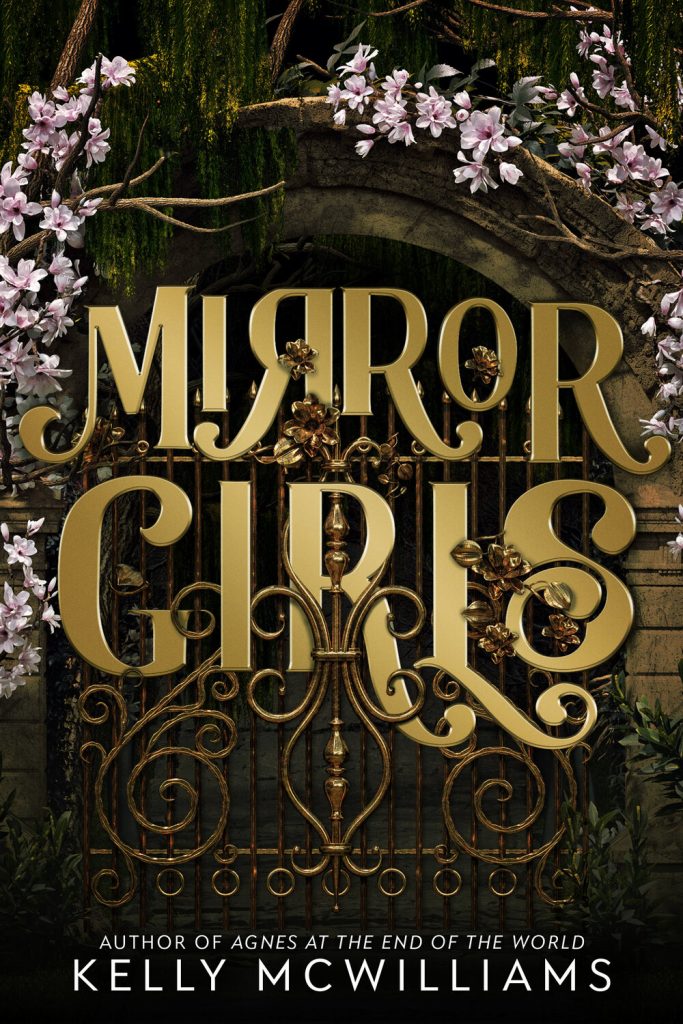 First of all, congratulations on your upcoming book, Mirror Girls! Could you tell us a little about yourself and about the book?

Mirror Girls is the story of biracial twin sisters separated at birth after the murder of their parents. They’re raised with no knowledge of each other’s existence, on opposite sides of the color line. Magnolia Heathwood is light-complected, and she’s been raised as a “white” heiress to an old plantation in her rural southern town; her sister’s been raised within the Black community in 1950’s Harlem, and dreams of becoming an NAACP organizer. The girls couldn’t be more different, but they must come together to untangle the mystery of their parents’ deaths—and their own deeply haunted history.

Where did you get the inspiration for this story?

I’m a mixed-race woman—my mother is Black and my father is white. I was born very light, but my brother is obviously Black. Growing up, we struggled to be taken seriously as a family. When we went to the grocery store with my mom, people assumed she was my nanny; when my Dad took us to the post office, people insisted my brother must be adopted! It’s shocking how offended, indignant, and even angry people quickly become when they can’t put your family into a clear racial box. One elementary school teacher straight out yelled at my brother and me, demanding that I admit that he was adopted.

It goes back even further than that, though.

This is the most shocking story I have to tell: On the day I was born, a nurse took me from my mother to administer some tests; afterwards, another nurse returned to my mother’s hospital room with a Black baby boy! My mother had to jump out of her hospital bed, screaming for her daughter, whom no one thought could possibly belong to her because I looked so white. My mother felt she could’ve lost me, all because racism is so incredibly deep-seated and stubborn it literally blinds people. In the hospital, I wore a wrist-tag with my name, my gender, and my mother’s name written on it. Still, the nurses couldn’t believe I was my mother’s child.

So I guess Mirror Girls came from this space of fear that society’s racial hatreds are so deep that mixed families, even today, have to fight to be together. We have to fight to say, no, we are a family—and just because you’re not used to meeting mixed race folk doesn’t mean we haven’t always been here! I wanted to dramatize that fight, and I wanted to set it during Jim Crow, in the 1950s, when the color lines were so harshly drawn.

How would you describe your writing process? Do you have any tricks you use to help your creative process?

My process is so messy I hesitate to recommend it to others! But I will say that it makes a huge difference to have trusted readers at every stage. Find yourself a friend who loves you enough to read your rough drafts, y’all!

Were there any stories growing up that you saw yourself in or were touched by in any way?

Growing up, I loved Octavia Butler. The Parable of the Sower is a huge source of inspiration; so is her historical sci-fi novel, Kindred, which features a mixed-race relationship.

Black folks also tell family stories, some of which are true, and all of which spark the imagination. Many of our oral tales go all the way back to slavery. I loved those family stories to death, and my imagination is sewn of them.

A large component of Mirror Girls is sisters of mixed-race identity navigating race and racism through a supernatural lens. As a mixed-race woman, would you say that you incorporated any part of your own identity into your writing?

I’m white-passing, like Magnolia Heathwood in my novel. In the story, her reflection mysteriously disappears from mirrors after she discovers that she’s mixed-race. Metaphorically, that’s asking, who is she outside of society’s norms? How can she conceive of herself, and “see” herself, in Jim Crow’s Black-and-white world? Magnolia’s ambiguity at first feels like a curse—but it’s gift in disguise.

There’s a funny echo of that mirror curse in my own life. Sometime in middle school, when I realized just how racially ambiguous I am, I stopped looking into mirrors—and I avoided my own reflection all the way through my twenties! My closest friends and family were Black, but I looked white; the world often treated me as if I were white, and that became a source of guilt (for the privilege it afforded me) and shame (because I was not, in fact, white). Like Magnolia, I had to make peace with the girl in the mirror, even though she didn’t always look like the ‘real me.’

But there’s a lot of my own identity in Charlie Yates, Magnolia’s twin, too. Like her, I’m galvanized by the need for social justice. While she protests the status quo, writing is my form of protest—and I’ve found a lot of solace in that. 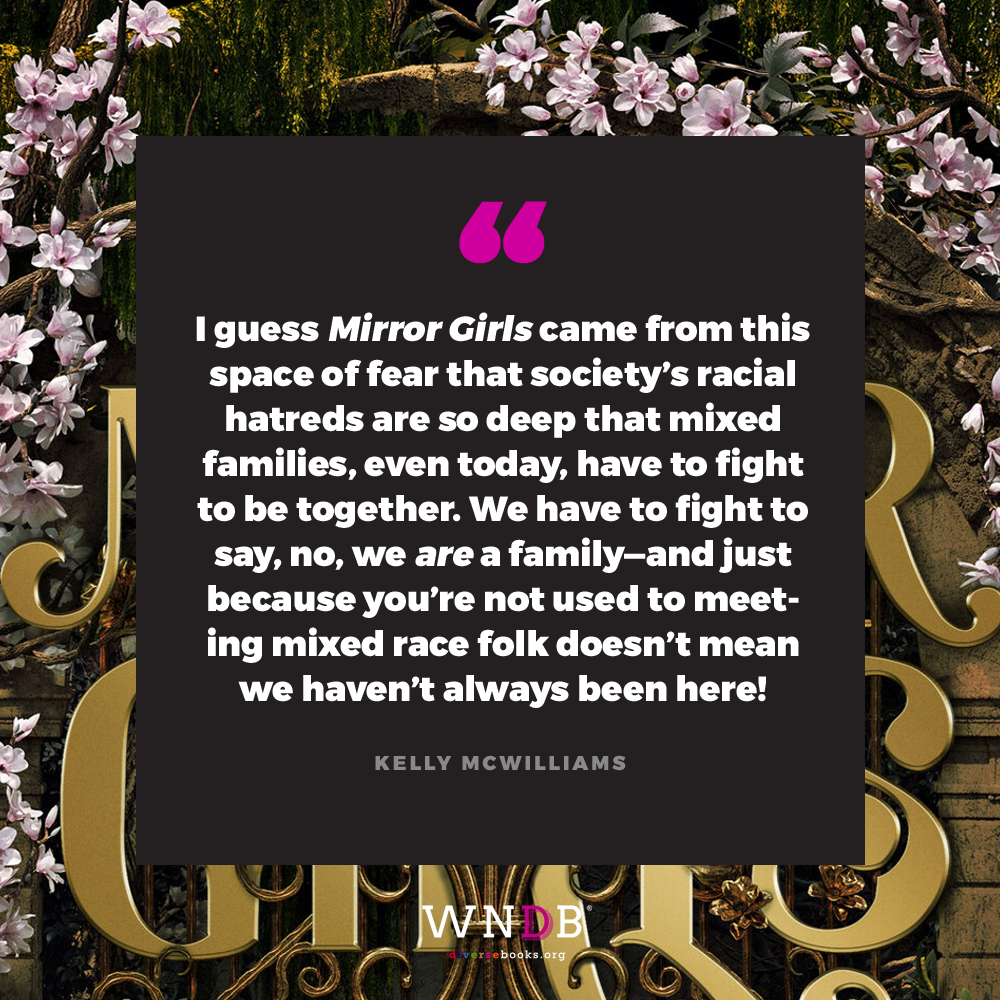 On that note, would you say there are any books or stories that stand in conversation with Mirror Girls?

Nella Larsen’s Passing is absolutely in conversation with Mirror Girls. So is every work of Black fiction that time travels back to the Jim Crow era, and even to slavery, to investigate where we are today. I think a lot about the work of Colson Whitehead, especially Nickel Boys.

Finally, my mother, Jewell Parker Rhodes, is also a writer. Her middle-grade book Black Brother, Black Brother is about a light-skinned boy and his Black brother, who are treated night-and-day differently at a New England prep school on the basis of skin color. In fact, this book draws on real inspiration from our lives—and real things that happened to us. I literally got to be ‘in conversation’ with my mother about these ideas while she was working on it!

A while back you were part of the WNDB Mentorship Program. What was that like and how would you say your writing/writing career has changed since then?

Jodi Meadows was my WNDB mentor, and it’s no exaggeration to say the mentorship changed my life. I had a crisis of confidence—in my own work, and in what kind of stories I should be allowed to tell—while writing my first book. But she lifted me up, encouraged me. We’re still close friends today, and I’ll always consider her a mentor.

Aside from writing, what do you enjoy doing in your free time?

Reading is my biggest hobby. These days, because it’s also work-adjacent, I never limit myself on reading time! Sometimes I get through five novels a week. I love it so much! And I’m loving the diversity in YA books.

I also treasure time with my five-year old daughter, and I’ll never say no to a happy hour with friends.

What’s a question you haven’t been asked yet, but that you wish you were asked (as well as the answer to that question)?

We talk a lot about the need for diverse books in children’s fiction (though we can always talk about it more!), and about the [movement for stories authored by people who identify the way their characters do]. But people don’t always ask how it feels to write from your own personal, and often marginalized, experience. It’s rewarding, but also painful. We put a huge burden on diverse writers to write from their own POV, so to speak—while white writers seem to have the freedom to write whatever they want. I guess I want to say that it’s okay not to write ONLY about your diverse identity. Write about unicorns, if you want to, or ancient shipwrecks, or cats! Work [that involves writing about your own identity/-ties] is crucial, but writers risk burnout if we don’t feel free to explore topics that aren’t obviously diverse. My first book, Agnes at the End of the World, is about a white girl in a religious cult—someone about as far away from my own life as it’s possible to be—and it was so liberating to imagine myself into her perspective. Of course, your own experiences wind up in any book you write, one way or another; but I hope young writers of color feel free to cast their nets wide. That’s true creative freedom, and we each of us deserve it.

What advice would you have to give to aspiring writers?

Don’t give up, but DO take breaks. Though it’s counter-intuitive, rest serves your work.

Are there any other projects you are currently working on and at liberty to talk about?

I’m so excited about my new book, which is as yet untitled. It’s the story of Harriet Douglass, who lives with her historian father on an old plantation turned enslaved people’s museum. Then a white family moves into the plantation next-door, with plans to turn it into a wedding venue—a disrespectful desecration of historical ground in Harriet’s eyes. With movie stars planning to wed in only a few months, Harriet embarks on an epic quest to cancel a modern-day plantation.

Finally, what are some diverse books you would recommend to the readers of WNDB?

I love Elise Bryant’s Happily Ever Afters, Kim Johnson’s This Is My America, and Christina Hammonds Reed’s The Black Kids. I also love everything Brandy Colbert has ever written!

Thank you so much, WNDB! Love you all! 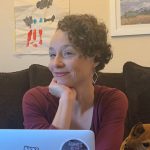 Kelly McWilliams is a mixed-race writer. She is the author of Doormat and Agnes at the End of the World. She lives in Seattle with her family.