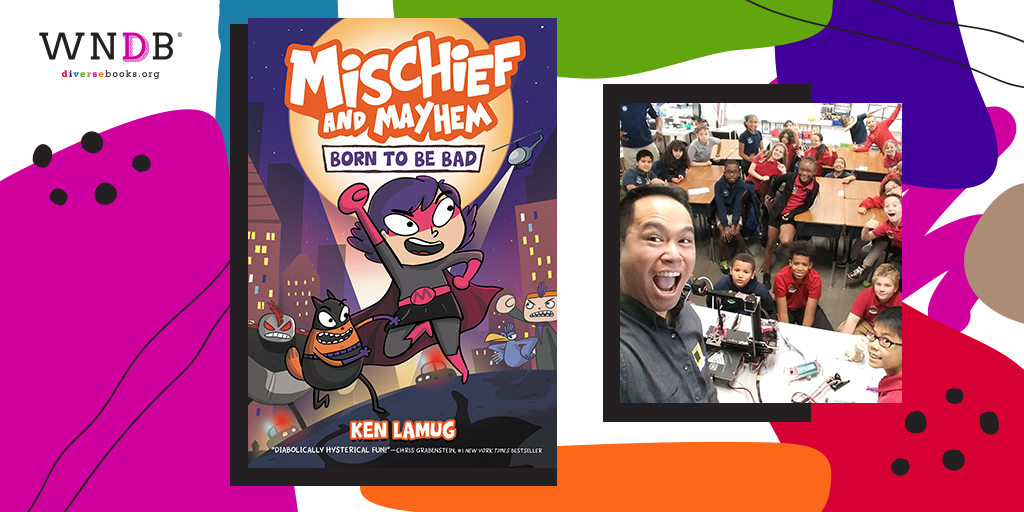 Mischief and Mayhem #1: Born to Be Bad by Ken Lamug is on sale on June 15, 2021. Watch the book trailer. If you order your copy of Mischief and Mayhem through The Writers Block, you will receive a signed book, bookmark, character sticker pad, and a poster.

Ever since I was a child, growing up in the Philippines, I’ve always enjoyed books. I spent school lunch breaks at the library and I often stopped by the bookstore on my way home. Books opened up a whole new world of possibilities that I could escape to.

It wasn’t uncommon for mama to pinch my ear as I daydreamed. She chided that my head was always in the clouds. Since buying comics was a luxury, I borrowed from friends, or I made my own from used copy paper.

The adults in my life were not a real big fan of my creative endeavors. It sort of made sense. Being an artist was not a glowing career path and parents only want the best for their kids.

At times I felt like I had two identities: the school-going, do the right thing version and the imaginative mischief-seeking kid. But I was always risk-averse, so my wackiness was mostly contained within writing, drawing, and daydreaming.

When my entire family moved to the US, all manner of creative endeavors stopped. Being the oldest child, I had to take on the mantle of responsibility and get a job to help pay the bills.

It was far into my adulthood (about a decade ago) when I got back into creative work. My creative inner child was finally free to pursue the passion that I once had.

Today, I’m proud to announce my debut graphic novel series—Mischief and Mayhem. In this book, I attempt to reach back to my childhood and bring to the reader the same fun and excitement that I experienced as I flipped through the pages of books I’ve read.

The heart of the story is not too far from my life experience—it’s about finding friendship, fun, and one’s true self. I hope that it puts a big smile on those who read it. 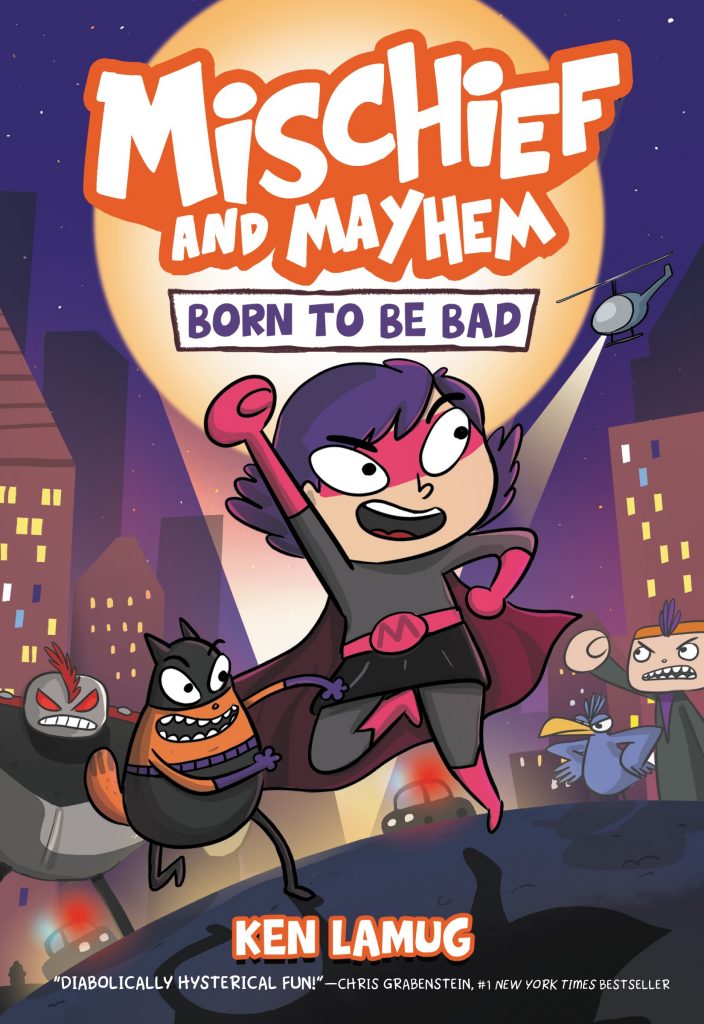 What is Mischief and Mayhem about? 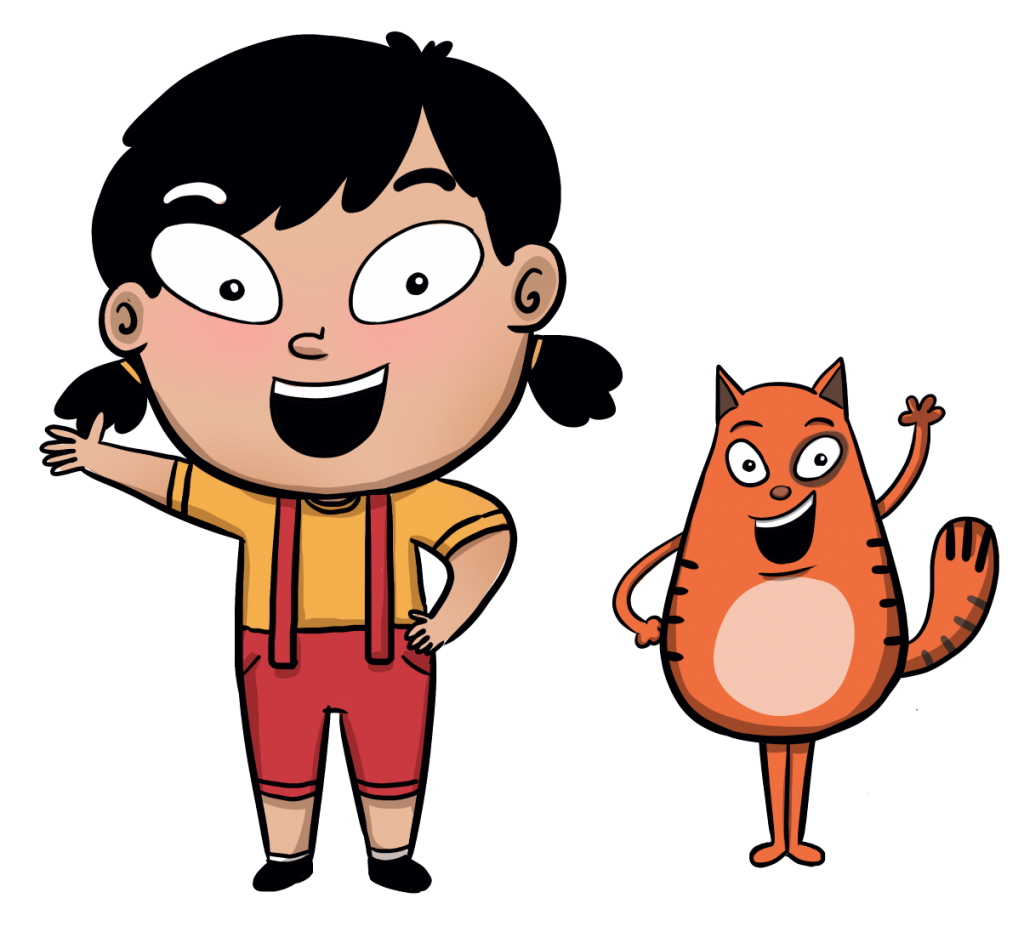 Mischief and Mayhem is about Missy and her cat Gizmo, friends who moonlight as supervillains (as their alter-egos Mischief and Mayhem). Missy is an inventive, kind-hearted, creative girl who has a hard time making friends. She decides to join a superhero boot camp where she can showcase her skills (building gadgets) and meet other kids. And even though she used her skills to surpass the obstacles at camp, Missy gets kicked out for not having any superpowers. This really upset her and turned her towards villainy along with her new best friend, Melvira.

Everything was great as the new villains caused harmless mayhem around town. But Missy soon discovers that Melvira has bad intentions and wants to take revenge against the heroes. Missy is not sure that she wants any part of this. She has to make a choice of going along with Melvira or potentially breaking it off with her one true friend.

How are villains and heroes portrayed in the story?

While the topic of villains and heroes can be quite complex, I had to be mindful about simplifying it for a book that’s geared towards a younger audience.

In the book, superheroes are celebrated. So it was an easy choice for Missy to join the superhero boot camp. But once kicked out, she realizes that superheroes had rules to follow and not everyone is accepted.

Villains, on the other hand, do not have rules and are free to do whatever they want. So with a song and dance, Melvira convinces Missy that their true destiny lies as villains and not heroes. Being villains afforded them the ability to be creative and use Missy’s inventions to aid in their harmless pranks.

But once Missy realizes that she doesn’t want to be a villain, she is once again displaced. That “in-between” category is something that she has to navigate on her own. For all intents and purposes, Missy is a “villain in name only”…  forced into this label created by the world she lives in. 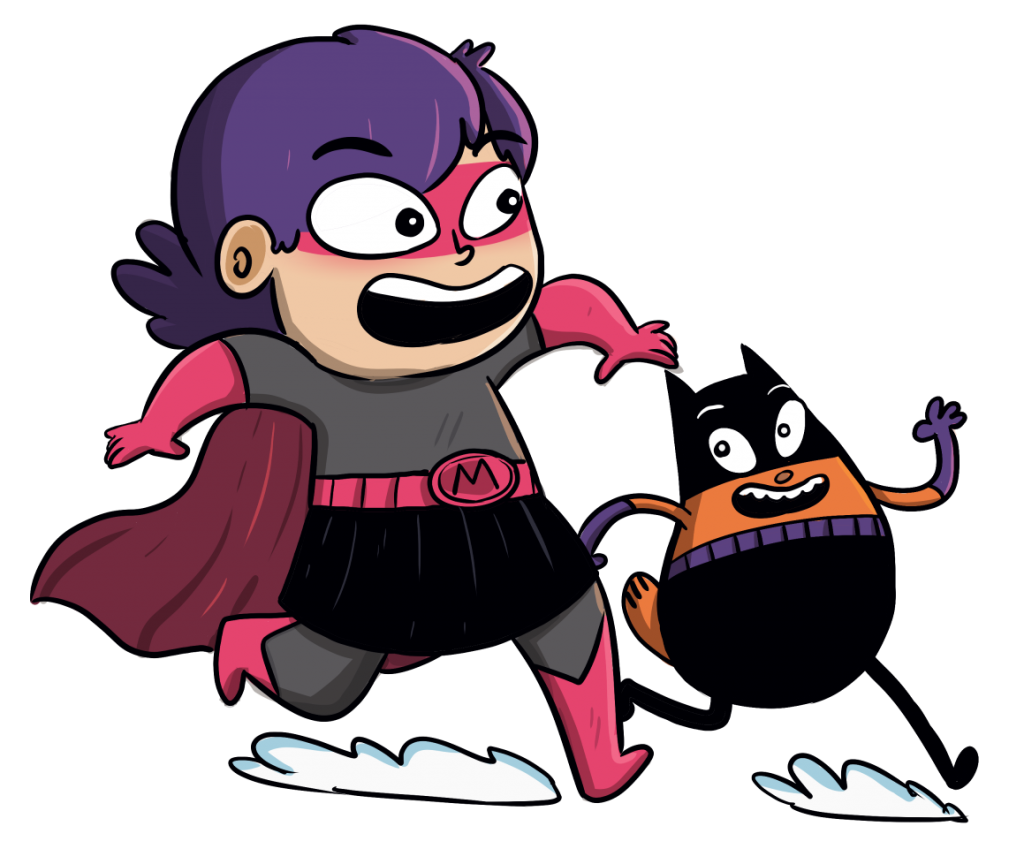 If we dig deeper, it’s somewhat similar in real life. Categories, labels, and names are created for a purpose. From a survival instinct, it helps us identify friends from foes. But this also means that we must meet certain criteria before we fit into those labels. It is not uncommon for the meanings to change over time and we might find ourselves lost, outside these labels.

The process of writing this graphic novel—did you envision the art first or the story, how did it all come together?

Since picture books are for a much younger age group (4-8), it was important to create a “dummy” or a mock-up of the book. This allowed me to experience the book, in the same way a child or a reader would.

I created a very rough draft of the book with text and basic outlines. Even back then, I could see the energy and playfulness of Mischief and I’m sure that same essence connected with the publishers. 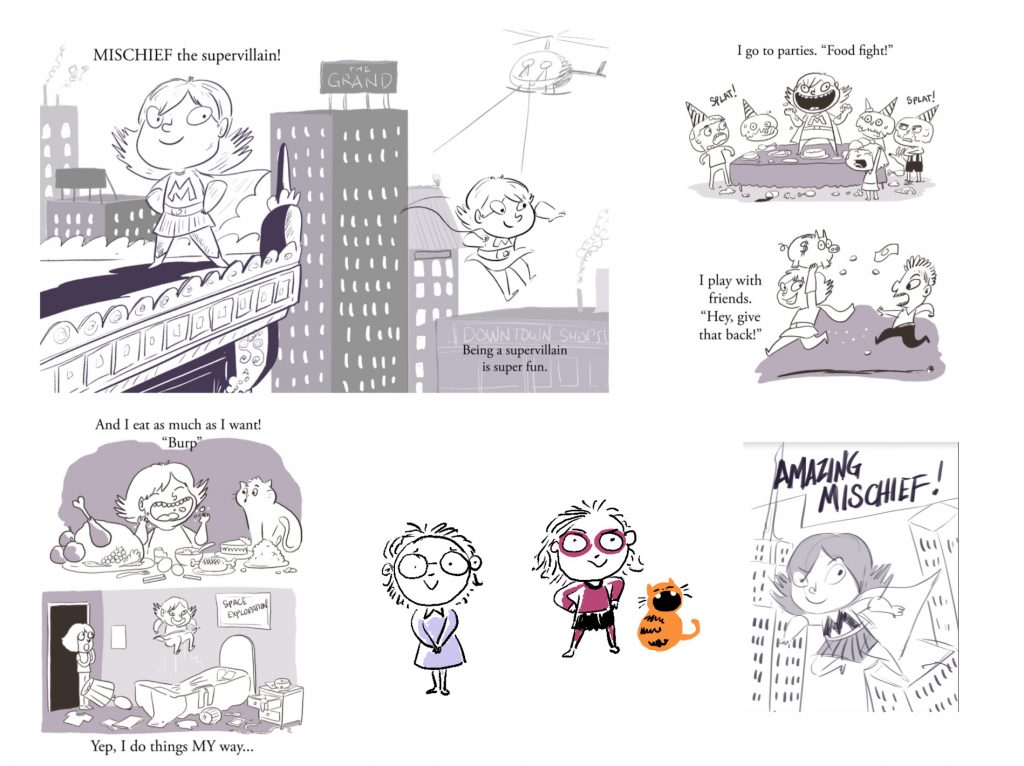 When my agent pitched the story to publishers it became apparent that they wanted more from the story. This is when we decided to switch it up and turn it into a graphic novel.

It was both an exciting and daunting prospect. Going from 32 pages to 200+ pages was a huge task. It involved adding more characters and more scenes. And in a comic format, it also meant more drawings per page. Yikes!

While I was working on the story, I reflected on experiences from my own childhood. I often had the feeling of solitude and never belonging. Being the oldest of five kids, I also pondered about certain expectations my parents had for my career and responsibilities. With these ideas in mind, I created a story that used the superhero genre to tie in the concepts together. But most importantly, I wanted the story to be fun and enjoyed by everyone. Filipinos are known for our funny and happy-go-lucky personalities. I was hoping that it rubbed into this story. Ha!

I love the idea of turning to villainy after being kicked out of superhero camp. Could You touch on the hero’s journey, antiheroes, what it means to be good and evil?

One of the bigger themes of Mischief and Mayhem is finding oneself. This universal idea is as old as time and an inherent part of the human condition—the search for identity and mission.

As someone who is trying to find her place in the world, Missy gets pressured by expectations from peers and family.

After trying boot camp and also becoming a supervillain, Missy sees that she’s shifting away from her true self. She realizes the need to transcend the labels of hero and villain and pursue her own path.

It’s only when she experiences both perspectives that she receives clarity on who she really is and what she needs to do.

Another aspect of the story is friendship. Missy and Melvira call themselves “Sisters in trouble,” because together they always seem to get in and out of trouble. It’s something that would catch on to Missy later in the story when things get really serious.

To keep the story light-hearted, I kept the idea of good and evil playful. Melvira might be a supervillain but she’s lovable. She is one to whom kids will be able to relate. And Missy’s moral compass prevents her from purposefully hurting anyone. 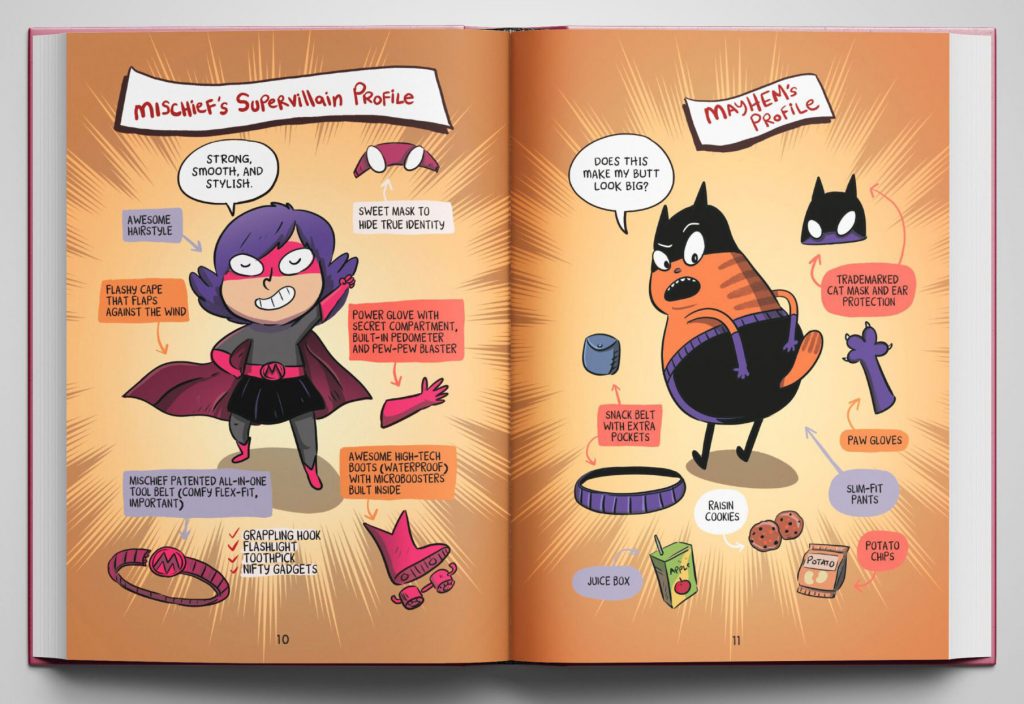 Your art style—what tools do you use? Does it depend on the project? What’s your process like?

Over the last few years, I’ve primarily been working digitally with the use of Adobe Photoshop and Clip Studio Pro. For writing my manuscript, I will use Microsoft Word, Google Docs, or Scrivener.

Here are the basic stages when creating Mischief and Mayhem: 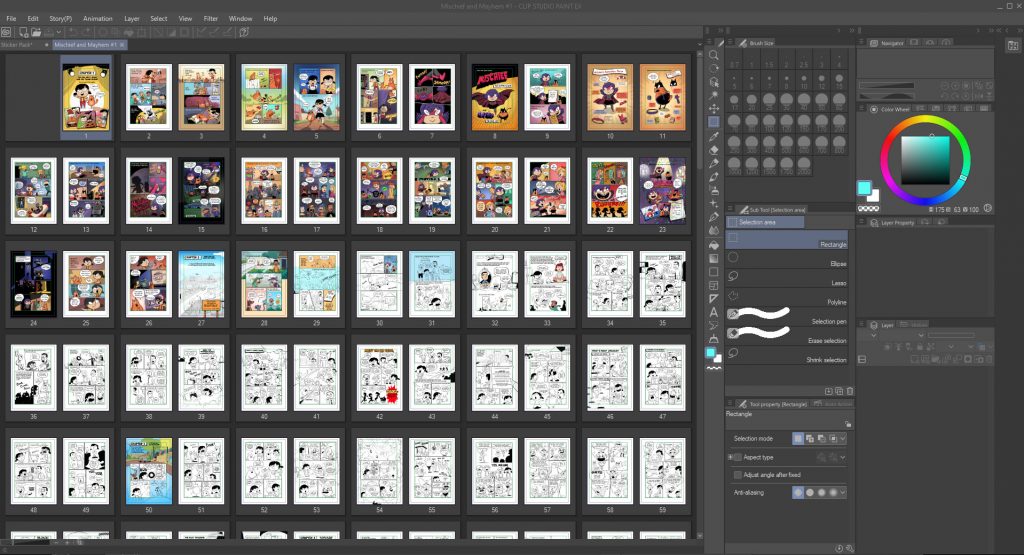 There’s a lot of back and forth between myself, the editor, and the art director throughout this process. Their feedback is valuable. Sometimes you’re working so closely with the project that you might miss some important details.

This is the longest book I’ve worked on and there’s always an opportunity to learn something new or improve a skill. I am currently working on Mischief and Mayhem book two and still finding new ways to improve the process. 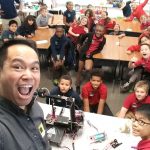 Ken Lamug is an author-illustrator who has created award-winning picture books and graphic novels. Growing up in the Philippines, Ken loved making up stories and drawing on leftover scraps of paper. The grown-ups begged him to stop, but he just kept doodling anyway.

After his entire family moved to the U.S. Ken stopped making stories and had to get a real job. He worked at a taco shop, computer tech-support company, stork lawn-sign installer and even as a paparazzi.

Ken has won awards for his books and his most proudest was when “Petro and the Flea King” was selected by the Nevada Humanities for the 2020 Library of Congress National Book Festival.

Ken lives in Las Vegas, Nevada where he is either walking his two dogs or untangling cables.

Find out more about Ken and his books via his website and social media:

Previous Post: « I Am Once Again Asking You To Use the Word Lesbian
Next Post: Liselle Sambury Wants Black Kids To See Themselves in Blood Like Magic »
LAST CALL for WNDB 2023 Internship Grant Partners!