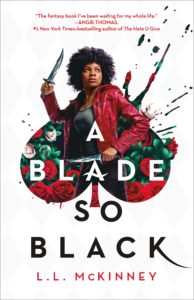 Are you ready for an epic about Black Girl Magic? WNDB was fortunate enough to have the opportunity to read an advance copy of A Blade So Black and to ask author L.L. McKinney questions about it, herself, writing, and diversity in publishing!

Thanks so much for taking the time to talk to us about your debut novel!

Of course! Happy to participate. Thank you for thinking of me!

First off, the world you’ve created is so rich with detail — love that you’ve maintained key elements of the original Alice in Wonderland while infusing it with elements of Buffy! Did you have any other major influences?

Sort of! I was initially inspired by a Supernatural episode that made some Buffy references, but that’s it. The Supernatural bits themselves didn’t really stick. In fact, I couldn’t even tell you which episode it was, and I don’t know if I’d recognize it if you played it for my now. So the story is absolutely 99% Buffy and Alice in Wonderland, with a healthy dose of Black girl magic.

Have you always wanted to be a writer?

Yes, ever since I was little, but then you get to high school and get the whole “that’s not a real career” talk. I was actually discouraged from writing by my 9th grade English teacher. Go figure, huh? So I went to school to make video games! I love those as much as I love books, and there were “real” jobs in that industry, right? But partway through getting my degree I found my way back to the page.

There are so many different kinds of creatures in your Wonderland, but the Nightmare beasts feel both incredibly inventive and incredibly real, partly because they’re made and fed by human fears. They’re a bit like the Dementors in Harry Potter in that way, how those are a metaphor for depression. Can you talk a little about the Nightmares and how you developed them?

Fear is… such a powerful force in this world, particularly within the Black Community. Yes, fear affects us all, but there are unique circumstances for Black people. Fear has been used for centuries to suppress us, from slavery to Jim Crow and lynchings, to how social media shines a light on the abuses and deaths at the hands of authorities. There’s a particular fear that goes through the community when one of us becomes another hashtag and it’s altered our lives. Our children are not allowed to be children, we have to teach them how to deal with police, we have to deal with police in certain ways. I know my heart rate goes wild when I so much as see a cop car, let alone if one pulls in behind me on the road.

So, taking how fear has a physical effect on my community, I thought to expand that to have a physical effect on the world overall with a focus on how it affects Black people. Thus, we have the Nightmares, who can alter human consciousness with their very presence, and yet it’s human consciousness that gives them their power. It’s a cycle that I was eager to explore.

The action in this book is particularly taut and high-adrenaline while also being focused on a particular quest. Have you always loved action and adventure?

Oddly enough, no? Well not really. Action movies and stories were never really my thing as a reader, but I’m a huge anime fan and anime has some of the BEST fight scenes in any medium. It’s expanded to animation in general, like Avatar the Last Airbender or Young Justice, those fight scenes are so awesome! So, as I explored writing early on I found I really enjoyed choreographing fight scenes the way I enjoyed watching them in animation, where they aren’t the focus but still add to the story.

Hatta seems to recruit Alice by chance, yet she obviously has a natural aptitude for the work he trains her for. What are your thoughts on Chosen One stories? Would you consider your book one of them? Or is that giving too much away?

Alice is but isn’t a “Chosen One” in the traditional sense, and that’s all I can say about her in particular. As far as the trope itself, I rather enjoy the stories. I know people are sick of them, but I’m not done with them. Most of the Chosen Ones have been white, and I’m ready for some Black and brown chosen ones. Let’s allow non-white boys and girls to see themselves in these roles, more than once, before we start tossing them aside.

It’s especially cool that Dreamwalkers can come from all over the world. Is there any significance in choosing for Alice to come from Atlanta?

So I knew Alice was a Blerd, and I knew she loved to cosplay with her dad, so I wanted them to attend DragonCon as a tradition. Plus I have family there and enjoy it every time I visit.

Parents are often glossed over if they’re portrayed much at all in YA, so it was both lovely and interesting to see Alice’s relationship with her mom. It’s obviously warm and loving but Alice’s struggle (to make curfew, defrost meat for dinner on time, protect her mom from the dangers of her work) is also so real. How important was it to you to render that relationship well? What did you consciously decide to do the same as or differently from other YA fantasy stories?

My mother, and her mother, my Granny, were the influences for Alice’s mom. I wanted her to have the same loving, caring, but sometimes frustrating experiences my sister and I did growing up. Parents got in the way of our every day regular lives, can you imagine if we had to fight monsters on the low?

Also, a year or two ago, there was a hashtag called #YAwithsoul where a bunch of Black writers and readers tweeted about their YA faves but there was a caveat that the characters were Black. That changed the whole dynamic of these stories, parents were a big part of the reason why. Go look at that hashtag, it’s hilarious.

Your Wonderland is so wonderfully, diversely populated, and of course you’ve been a vocal advocate and activist for diversity for years. What steps do you take to make sure your writing is as intersectional as possible?

I asked questions. I had readers. I made sure to pay respect to the people and cultures I was presenting within Wonderland. The thing is, Wonderland doesn’t have races, not like the real world does. But because the entire world’s subconscious went into creating this realm, and all of the people and creatures populating it, we get different skin tones and features and cultural influences. We get accents without accents. We get them all knowing multiple languages. So I wanted to code in cultures from around the world without saying “yes, this is definitely this or that.” At the same time, I’ll say Hatta is white because white doesn’t have a culturally significant identifier connected to it, not like Irish, English, Scottish, etc.. It was important to me to reflect these things without making them caricatures.

Love love love the abundance of Black Girl Magic in this book! What do you wish you’d seen more of in fiction as a teen that you purposely worked into this book?

Finally, we’ve come a long way, but we still have a ways to go in terms of representation for marginalized folks in publishing. What advice would you give to aspiring, diverse creators? 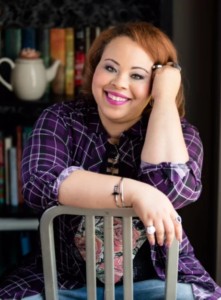 L.L. McKinney is a writer, a poet, and an active member of the kidlit community. She’s an advocate for equality and inclusion in publishing, and the creator of the hashtag #WhatWoCWritersHear. She’s spent time in the slush by serving as a reader for agents and participating as a judge in various online writing contests. She’s also a gamer girl and an adamant Hei Hei stan. A Blade So Black is her debut novel.

You can find her on Twitter @ElleOnWords and on her official site.

A Blade So Black will be released on September 25th.

Previous Post: « Q&A with Hena Khan
Next Post: WNDB Announces the 2019 Walter Awards & Symposium at the Library of Congress »
Save the date for the #WalterAwards23! You can now