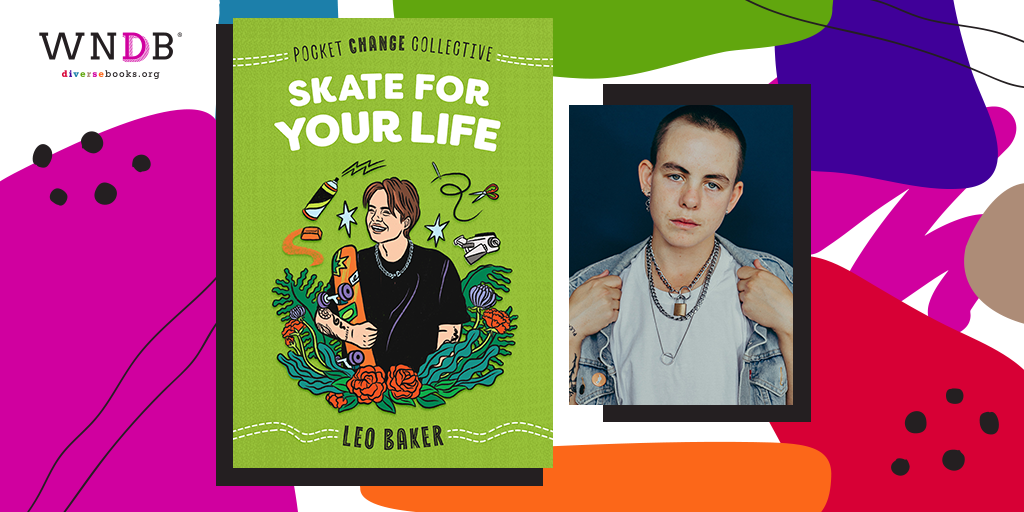 Today we’re pleased to welcome Leo Baker to the WNDB blog to discuss Skate for Your Life. 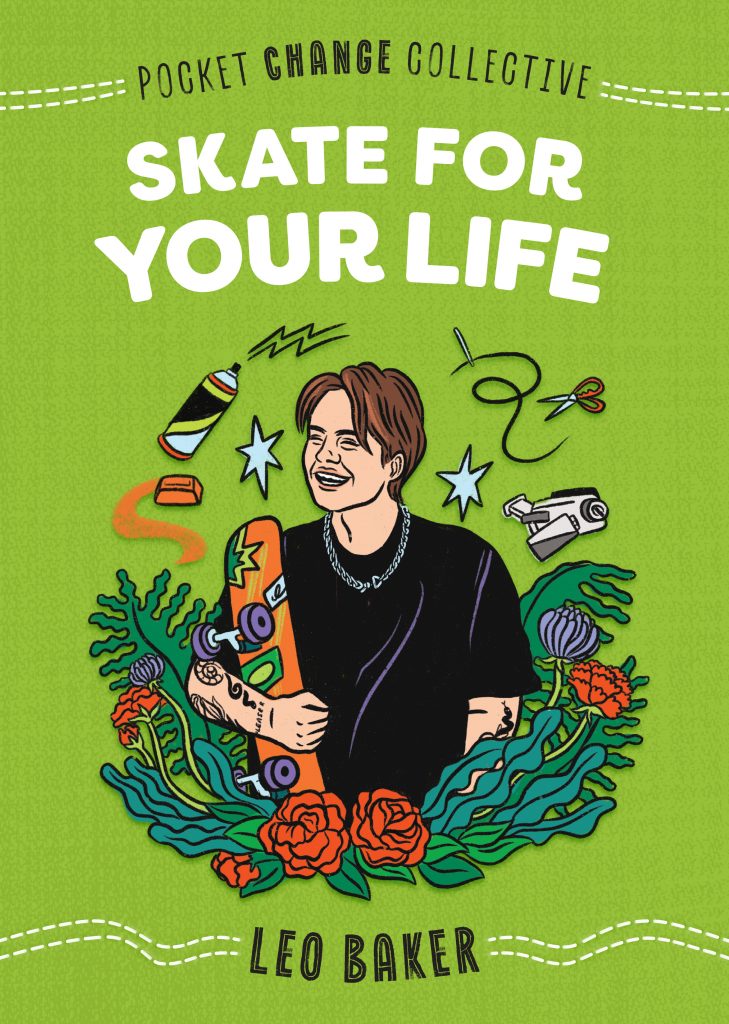 First of all, congratulations on your newest book, Skate for Your Life. Could you tell us in your own words what it’s about?

Skate For Your Life chronicles my journey growing up skateboarding, my experience in the skate industry, my relationship with the construct of gender, and the change I hope to see and make in the skate world.

What drew you to skating?

I was drawn to skating because it just looked so fun. I was very young when I found it initially and I can’t remember a whole lot other than just obsessively wanting to do it.

How do you feel the skating world and other sports fields can work to exist as safe places for other nonbinary and queer athletes?

If people put their heads together to think of ways we can adapt to the expansive spectrum of gender, a spectrum that has always existed, it would absolutely be possible to create that space. We can call into question the binary first and foremost. Maybe there is a more accurate way to categorize people to compete fairly regardless of gender? Maybe categorizing people based on their genitals was never a good idea? I think that would be a good starting point.

Your motto is “Your authenticity is your superpower.” Could you expand on this?

Being vulnerable is incredibly powerful, it is the most human way to be. Authenticity requires vulnerability, and the more we express ourselves, the more we can create space for others to do the same. I was never able to see the change I wanted until I started being unapologetic about who I am. Until that point, my authenticity was compromised, and in that, my humanity was obscured.

Growing up, were there any stories, books, or media you related to or could find your own experiences in?

Not a single thing! I didn’t even know what being trans was until I was in my late teens/early twenties. The course of my life may have been completely different had I known that it was possible to transition. 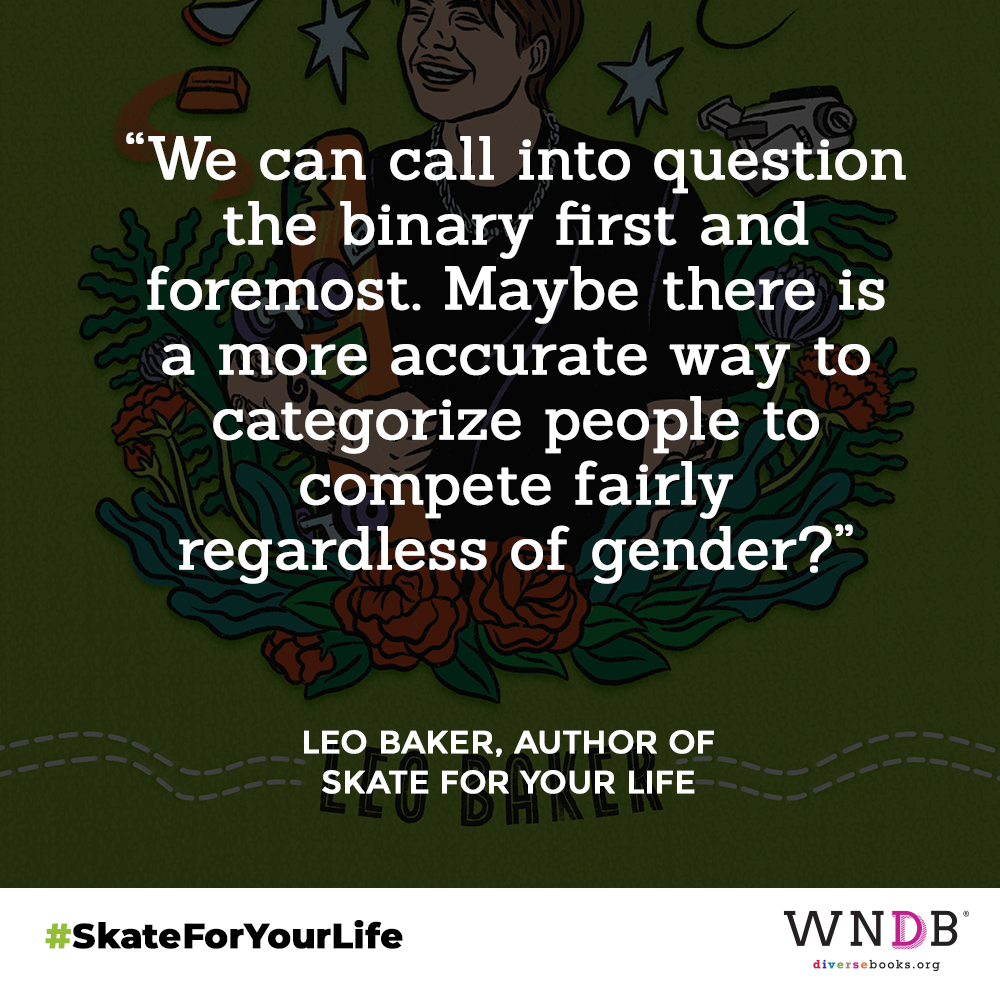 As We Need Diverse Books is positioned to younger readers, what advice would you give younger audiences navigating their identities? Do you have any specific advice for other aspiring LGBTQ+ athletes?

Accepting the journey and evolution of yourself is major. Treating yourself with kindness and compassion is the most necessary thing you can do for yourself. Be kind to yourself, be kind to others. Do what you love and own it. And say what you need to say!!!!!!!

Are there any books or voices you would recommend the readers of We Need Diverse Books to check out?

Besides this book, are there are other projects you are working on and at liberty to discuss?

At this time I am pouring every ounce of my energy into skateboarding, as this is the first chapter of my life that I get to experience it in my correct way. I have never been more excited about skateboarding than I was since I first discovered it.

Leo Baker is one of the most iconic skateboarders in the world. A staple at the X Games, Leo took their abilities to Street League for back-to-back victories in 2016 and 2017. Their work has been featured on outlets like Thrasher, ESPN, Vice, Nike’s 30th Anniversary “Just Do It” Campaign, New York Times Magazine, Rolling Stone, Vogue, and more. In 2019, they founded the NYC Skate Project, which is an effort to shift the dynamics in skateboarding and create a safe space for non-male skaters to build community with one another. Their undying commitment to themselves and their scene has earned them global adoration from fans and friends both near and far.

Previous Post: « Burn It Down: On World Building a Defiant Queer Response to Hogwarts
Next Post: Cover Reveal for Mango All the Time by Fracaswell Hyman »
We're thrilled to reveal the cover for TOKYO NIGHT