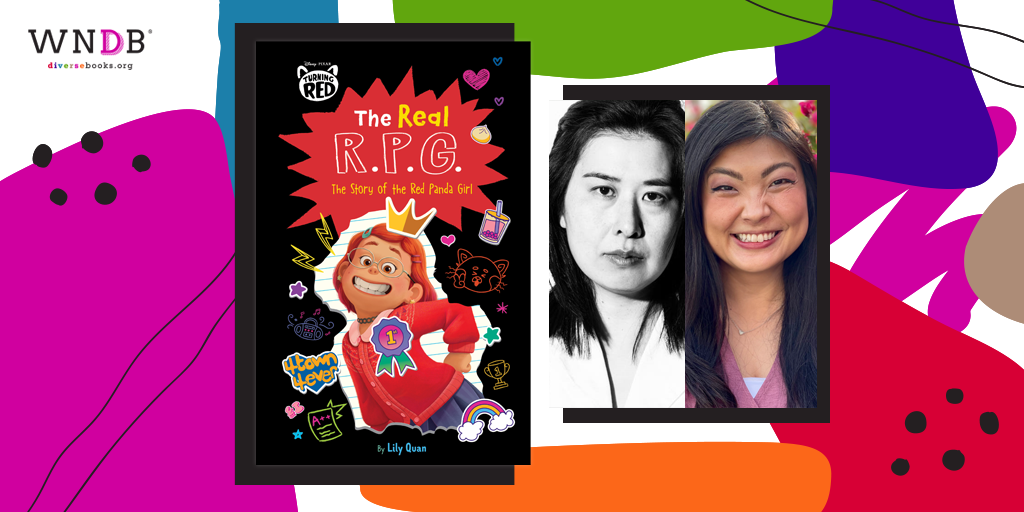 Today we’re pleased to welcome Lily Quan and Aimee Murata to the WNDB blog to discuss Disney and Pixar’s Turning Red: The Real R.P.G.: The Story of the Red Panda Girl, out now!

Based on Disney and Pixar’s film Turning Red, this middle grade novel explores the crazy, amazing, and often-times hilarious experiences of thirteen-year-old Meilin Lee. Meilin Lee started out like any other thirteen-year-old: hanging out with her friends, dealing with middle school, and helping her family. You know, normal stuff. Then one day . . . POOF! Suddenly, she was a GIANT. RED. PANDA. She thought her life was over, but it turned out only to be the beginning. People may think they know the real Meilin, but don’t be fooled by the fluffy exterior. This Red Panda Girl has A LOT to say! 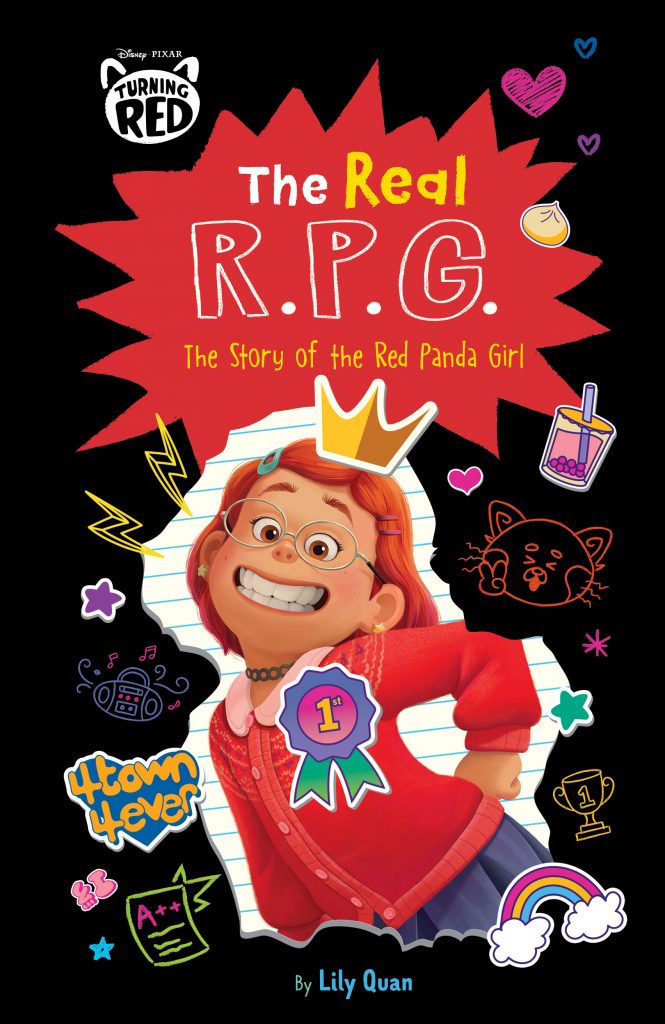 Could you tell us a little bit about yourselves?

Lily: I am a Chinese-Canadian writer originally from Toronto. I now live on Vancouver Island. I was a 2020 WNDB mentee and my mentor was Aisha Saeed, who was wonderful.

I’m currently working on a middle grade novel called The One And Only Rosie Chen. It won the 2021 Emerging Voices Award from the Society of Children’s Writers and Illustrators (SCBWI) and was the Middle Grade winner in the 2019 Writing for Children Competition from the Canadian Society of Children’s Authors, Illustrators and Performers (CANSCAIP).

Aimee: I am an editor based in the Los Angeles area. I started as an editorial assistant with Disney Publishing straight out of college, and I’ve been here ever since!

How did you come to work on the book, Disney and Pixar’s Turning Red: The Real R.P.G.: The Story of the Red Panda Girl? How did this project come to be?

Lily: In November 2020, I was contacted by Aimee, who introduced herself as an editor at Disney Publishing. I was busy working on my own novel at the time. Rosie is about a 13 year-old Chinese-Canadian girl growing up in Toronto. Aimee saw my bio on the WNDB website and thought I might be a good fit for a writing project she had. We set up a call. Aimee explained over the phone that the project was the middle grade book adaptation of a Pixar film by director Domee Shi. Then she said, “The movie is about a 13 year-old Chinese-Canadian girl in Toronto…” I almost fell off my chair. Aimee liked the selections I sent her from Rosie and that’s how I ended up with the assignment.

I am very thankful for WNDB. Its mission is to highlight diverse writers and that’s exactly what happened. If it hadn’t been my mentorship, Aimee would never have found me.

Aimee: My team creates books tied to content from Pixar Animation Studios and Walt Disney Animation Studios, and I was lucky enough to be the lead editor on the Turning Red publishing program. While I was preparing for the middle grade novel, I came across Lily’s profile on the WNDB website. Between Lily’s experience with middle grade and her Chinese-Canadian heritage, it felt like fate! This book provided an opportunity to create original content inspired by the film, so it was important to me to work with a writer who could lend not only creativity, but also authenticity and expertise. And Lily fit that bill perfectly!

How would you describe your collaboration process working together as author and editor on this book?

Lily: Aimee was amazing to work with. This was my first time doing a book adaptation. If I had a question or needed direction, she was always there.

We worked closely together to flesh out material for the novel. Since I had already been writing about adolescence and Chinese-Canadian culture for 4 years, I knew that world inside out and I really wanted to bring it alive. Aimee trusted my instincts in developing the characters and their relationships.

Aimee: A book like this one presents unique challenges for writers and editors. We have to strike a balance between being true to the film and its characters, while also building out characters and relationships beyond what we see in the film. Because of that, Pixar is an important partner during this process. In fact, Lily joined a call with some of the filmmakers early on to brainstorm ideas. And because we were developing the book alongside Pixar’s development of the film, we had adapt to story changes and other unexpected challenges. So there were a lot of moving pieces, and Lily was amazing at adapting to everything that was thrown her way. We stayed in close contact while Lily was writing, and I tried to make sure that she got all the information and support that she needed. This book is undoubtedly a testament to collaboration, communication, and flexibility!

What are your thoughts on the movie, Turning Red?

Lily: The movie is groundbreaking in so many ways. I’m thrilled that people have really connected to the storylines and the characters and that young girls see themselves in it. I wish there had been a movie like this when I was growing up. As well, it was refreshing to see my hometown finally featured in a movie. Go SkyDome!

Aimee: Turning Red has become one of my favorite Pixar films. Echoing Lily, I wish a film like this had existed when I was growing up. I love that it focuses on female friendships and the turmoil of puberty and growing up. It’s amazing to see how it encourages kids to be themselves completely—even if they are dorky, weird, or anything in between. It’s also inspiring to see all the excitement about the director Domee Shi. I think this film demonstrates how important and valuable it is to uplift diverse voices. Something as special as Turning Red could not have been made without Domee and her unique perspective. 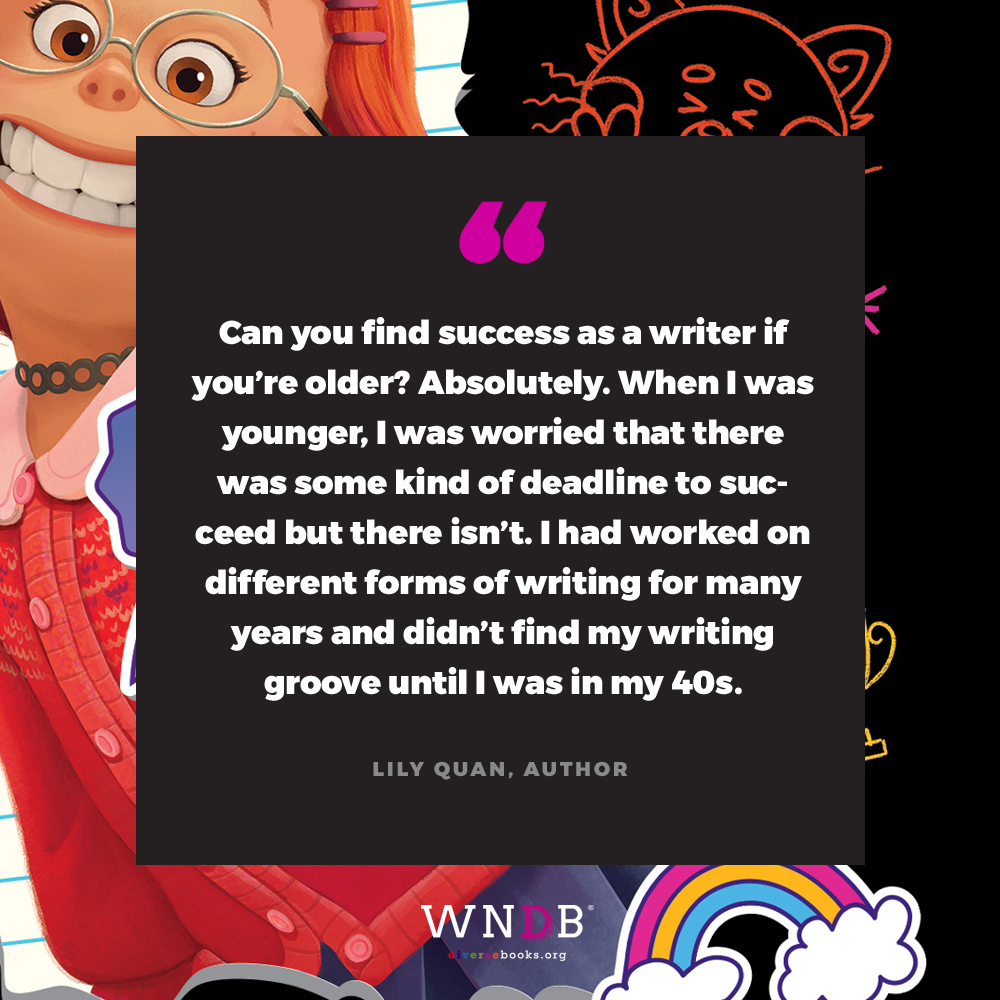 Do you feel you have any personal connection to the characters or themes in Turning Red?

Lily: As a teenager, I had a lot of clashes with my own mother. I can certainly relate to Mei’s dilemma of wanting to be an obedient daughter yet wanting her own independence.

Aimee: As an Asian American who was a tween in the early 2000s, played the flute, loved (and still loves!) boy bands, and was rather dorky herself, I definitely relate to Mei. She has much more confidence than I ever had at her age though! But I’ll never forget the feeling I had the first time I saw the film, and I realized I could completely see myself in Mei. For an adult to feel that way is one thing, but for a child, it’s priceless.

Where would you say you first found your love for storytelling? Were there any books/media that you felt personally touched by or reflected in growing up?

Lily: Writing has always been part of my life. A book that influenced my writing was Growing Up by Russell Baker. It’s a memoir about his childhood during the Great Depression. The novel isn’t just his story: he layers in the struggles of his family and his country in that era. I liked the way he fully fleshed out other people’s hardships and humanity within a story about his own life.

Aimee: My love of books started from a young age. My mom was a teacher, so I was lucky enough to have had access to many children’s books. I became a voracious reader, and I loved exploring different worlds and meeting different characters. If my child self knew that she’d one day make a living by creating books, she’d be beyond thrilled.

What advice would you give to aspiring writers/creators, especially those interested in the animation industry?

Lily: My advice for aspiring writers is to be prepared for the long haul. It’s tough to get established and you have to find the writing process rewarding.

Aimee: It’s a bit clichéd, but networking should become your best friend—and this is true across disciplines/industries. During my last year of college, I had reached out to an alumna of my college on a whim. She was working for Disney Publishing, and I asked her some questions about her job and career path. Months later, she remembered me and referred me for a position that had opened up with Disney Publishing—and the rest is history! Networking can be intimidating, but I’ve found that most people are receptive and willing to help, especially if you have similarities like a university, organization, etc. Just do your research and be respectful and patient!

What’s a question you haven’t been asked yet but wish you were asked (as well as the answer to that question)?

Lily: Can you find success as a writer if you’re older? Absolutely. When I was younger, I was worried that there was some kind of deadline to succeed but there isn’t. I had worked on different forms of writing for many years and didn’t find my writing groove until I was in my 40s.

Aimee: What is your favorite part in The Real R.P.G.? One of my favorite chapters in the book is when Mei goes to dim sum with her grandma and aunties. It is original to the book, but it fits so seamlessly that you would think it was part of the film as well. Lily perfectly captured the different personalities of the aunties, and you get a vivid picture of their dynamic with Mei. And Lily’s descriptions of the food will make you so hungry!

Finally, what books would you recommend to the readers of WNDB?

Lily: A book that I love is Stand-Up, Yumi Chung! by Jessica Kim. It’s an MG novel about a Korean-American girl who wants to do stand-up comedy. It’s funny and heartwarming. Yumi was released just as the pandemic hit, and I don’t know if it got the attention that it deserved.

Aimee: I recently finished the second book in Chloe Gong’s These Violent Delights series. It’s impressive in its worldbuilding and is full of action, suspense, and romance. One of the best books that I read last year was the graphic novel The Magic Fish by Trung Le Nguyen. It’s a masterpiece with stunning illustrations that effortlessly weave together themes like family, coming out, immigration, and the power of storytelling. 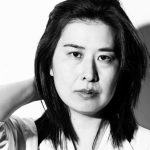 Lily Quan is an award-winning writer of middle grade and young adult novels. Her work has appeared nationally on CBC Radio and The Globe and Mail. A fan of all things literary, Lily established and directed the Northern Lights Writers’ Conference and the Yukon Nonfiction Festival while living in Whitehorse, Yukon. She lives in Nanaimo, British Columbia. 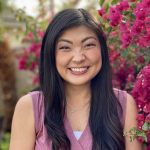 Aimee Murata is a children’s book editor in sunny Los Angeles. When she isn’t editing or reading, she is trying out new recipes or dreaming about her next travel destination.

Previous Post: « 35 Educators Receive Grants to Support Diverse Books
Next Post: How to Run for Your School Board »
Save the date for the #WalterAwards23! You can now