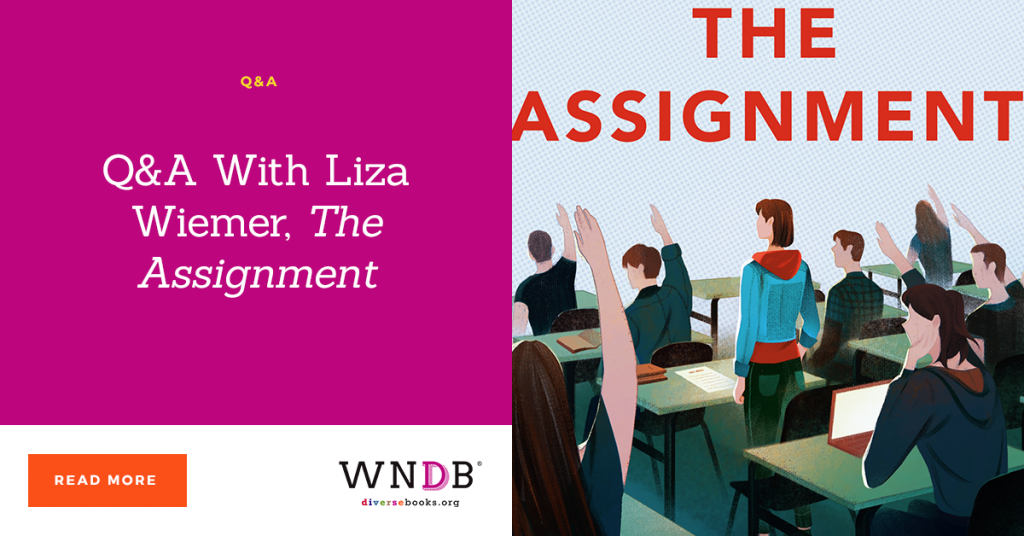 Today we’re pleased to welcome Liza Wiemer to the WNDB blog to discuss her YA novel The Assignment, out August 25, 2020! 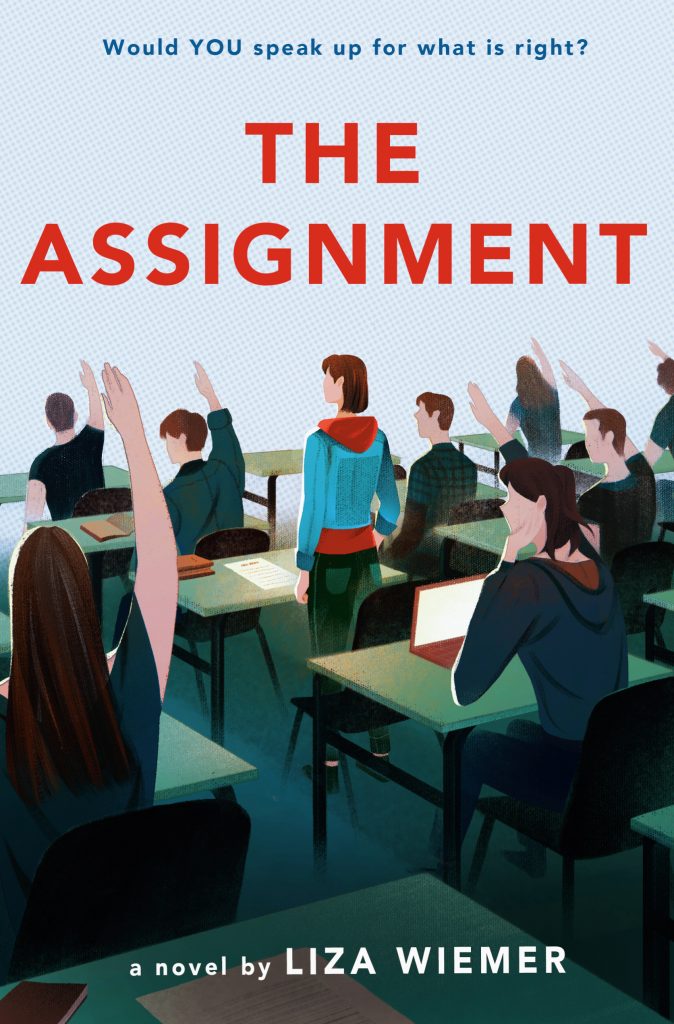 SENIOR YEAR. When an assignment given by a favorite teacher instructs a group of students to argue for the Final Solution, a euphemism used to describe the Nazi plan for the genocide of the Jewish people, Logan March and Cade Crawford are horrified. Their teacher cannot seriously expect anyone to complete an assignment that fuels intolerance and discrimination. Logan and Cade decide they must take a stand.As the school administration addressed the teens’ refusal to participate in the appalling debate, the student body, their parents, and the larger community are forced to face the issue as well. The situation explodes, and acrimony and anger result. What does it take for tolerance, justice, and love to prevail?

What did you learn from the research you did about racist and antisemitic school assignments?

School assignments exploring important, complicated issues are a crucial part of education. They foster critical thinking and discussion. However, damaging, misguided, and thoughtless assignments dealing with those tough issues can be presented in racist or antisemitic ways and are much more common than people would think. Once news got out that I was writing this novel, people messaged me or told me directly about similar harmful assignments—some successfully challenged, some that were not. Those who remained silent did so for several reasons: fear of confrontation, retaliation, or being ostracized. They didn’t want to cause trouble or get a teacher in trouble. Students didn’t want to be seen as tattletales or complainers. But no one should ever have to defend the indefensible. No one should have to justify the unjustifiable. Speaking up is hard. I heard from many who didn’t confront the issue that they regretted staying silent. We need to foster environments where upstanders are respected and feel safe to confront hatred and injustice. That’s why I feel having a novel like this is critical. It promotes discussion. It allows readers to contemplate what they would do if they found themselves in a similar situation and shows that courage comes from within.

Was there anything from your research that didn’t make it into The Assignment?

Yes, there was a lot of extensive historical research that didn’t make it into the novel. It would have bogged down the narrative or taken the story in too many different directions.

One particular area of research I wanted to explore and incorporate in some way was the vile treatment of our American POWs by the Nazis. It’s not an area that’s often explored when learning about the Holocaust. The purpose of the Final Solution was to wipe out Europe’s eleven million Jews, but Nazi brutality extended beyond the Jewish population.

So while I was reading about American World War II POWs, I came across the shocking story of Anthony Acevedo, a Mexican American combat medic in the United States Army, Infantry. He was one of 350 American soldiers captured during the Battle of the Bulge who were enslaved, starved, and tortured at Berga concentration camp because of ethnicity, skin color, or religion. He managed to keep a secret diary about their horrifying experience.

Although I didn’t include this particular account, it’s important to know about this history.

For a short interview, check out: “This POW kept a secret diary that showed daily life in a concentration camp.”

Regrettably, I was unable to incorporate Gerda Weissman Klein’s remarkable and uplifting story that shows the power and resilience of the human spirit. She was a Holocaust survivor, author, and founder of Citizenship Counts. On February 15, 2011, President Barak Obama awarded her the Presidential Medal of Freedom, the nation’s highest honor given to a civilian. Check out this deeply touching short video about her liberation by American solider, Kurt Klein, the man who eventually became her husband.

Although this book addresses an assignment about the Holocaust, this book is clearly set in the present. How can educators utilize this in their classrooms for Holocaust education?

The Assignment provides teachers and students with a strong foundation of historical information on the Holocaust that will be informative and enlightening to readers. It also shows the impact of antisemitism and all forms of hate have on society. The brave actions of Cade and Logan, the two teens in the novel who speak up against the hateful assignment, will evoke a lot of discussions, comparing the past to what we’re experiencing in today’s society. I do want to note that Logan, who is the first to react, is not Jewish.

Utilizing this book for Holocaust education is only one way it could be effectively used in classrooms. It can also be taught in English or social studies courses that focus on social justice, community, or world issues. It’s about empowering teens, providing many different examples for students to figure out how they would choose to address an injustice. This book lends itself to discussions on antisemitism, racism, anti-LGBTQIAP+, bullying, and what it takes to have the courage to be an upstander. I also wanted to show that seeking support from others within your school and/or your community is important and often not as challenging as one might imagine. There will be people who have your back!

There’s a powerful scene in the novel where community members come out and offer support to Cade’s family after their inn is vandalized. Why was that support pivotal for these teens and what did it mean for the community?

Before this moment, Cade and Logan received very little support from anyone at their school or community. After facing tremendous resistance and hateful acts, they had to draw upon strength from each other and from their families. But when the community came out, they no longer were isolated. This recognition made a statement against intolerance, antisemitism, bigotry, racism, and all forms of hate. Gathering together to protest and to show support is important, but it’s also just one step. During this rally, Cade gives a short speech expressing gratitude, but he also makes it clear that there is more work to be done. Deep-rooted bigoted belief systems need to be acknowledged, examined, and changed. That takes time, commitment, and hard work. We know about the importance of protesting and this novel shows it.

What impact did writing this novel have on your own Jewish identity?

In “A Note From The Author,” I ask, “Can you be proud of your heritage, your faith, your identity, yet also have a strong need to protect or hide yourself from the outside world?” I love being Jewish and have spent my entire life active within the Jewish community, but in order to protect myself from horrible antisemitic attacks, which I experienced both as a child and an adult, I often chose not to expose this important part of my identity. Writing this book opened the door for me to examine this. Antisemitism has reached a 40-year high in the United States and it continues to rise. This experience made me realize that fear must not win. As Holocaust survivor and Nobel Peace winner, Elie Wiesel said, “the world did know and remained silent. And that is why I swore never to be silent whenever human beings endure suffering and humiliation. We must take sides. Neutrality helps the oppressor, never the victim. Silence encourages the tormentor, never the tormented.”

Share a behind-the-scenes novel secret, something readers wouldn’t know just from picking up this book.

There is a protest scene to stop the debate. Others want it continued. When the protest gets out of hand, a secondary character starts singing “Hallelujah” and the crowd joins in. For me, it’s a goosebump moment. I listened and reviewed the lyrics of at least fifty songs before I found “Hallelujah” and realized how perfect it was for the scene. When the song ends, the girl who started it reveals something impactful about the song. People will have to read it to find out! Whenever I reread that section, it comes to life for me. I could see it happening today.

For one of my favorite “Hallelujah” performances, check out this YouTube video performed on Oprah by the Canadian Tenors with a surprise visit from Celine Dion.

A mix, so a plantser.

Before I start a novel, I have a general outline of the plot and I always begin a chapter thinking it through, talking to my characters, and planning out what I’m going to write.

The pantser side comes out during bursts of inspiration. It’s usually when I’m so entrenched in the story that I’m nearly oblivious to what’s around me and I’m going with the flow, allowing the story to unfold. I love these moments because the unexpected usually makes the novel so much more interesting and engaging.

What other books do you think The Assignment is in conversation with? And do you have any recommendations for published or forthcoming YA novels?

I turn to the review from School Library Journal that said, “A good choice for fans of Angie Thomas’s The Hate U Give and Nic Stone’s Dear Martin.” The correlation between The Assignment and these books I deeply admire is that they show the impact of hate, what it takes to be an upstander, and the strength needed to speak out against injustice, intolerance, bigotry, discrimination, racism, and hate. These books show ordinary teens who do something incredibly brave under circumstances they had no control over. They show that even though it’s hard, painful, and frightening to confront these issues, their voices matter, that teens can and must speak up against hatred.

Another book that The Assignment is compared to is The Wave by Todd Strasser, which was also based on a 1969 true incident that occurred in a Palo Alto, California high school history class. That novel shows how easy it is to be swept away into Fascist ideas and the destructive force it has on humanity.

What advice would you give teens who don’t feel like they have a voice or are afraid to use it?

I grew up in a home where my voice was silenced. Even when I was right, I was told that I wrong, and arguing only got me into trouble. It’s a form of abuse when adults misuse their power or authority to try and silence teens. There are going to be people who come into your life or who are already in your life who’ll do everything they can to silence you. Always know that you are important, special, unique, beautiful just as you are. Do not let anyone steal your self-esteem with ugly words or actions.

We know words have power and that people use them to knock others down. I personally know what this is like. But each one of us has a choice—we can either choose to lift others up or tear them down. Our words, our actions reflect on our most valuable possession and the only thing that we truly own, the only thing that we can truly control in this world is our name. Our name represents the lifetime collection of our words, actions, and deeds. Don’t allow others to tell you what to think or how to feel. Don’t allow others to define you. Listen. Learn. Seek out mentors you respect and who respect you. Read books that inspire you and help you to see yourself more clearly. And most of all, know that your voice matters. There are many ways to speak up. Find yours. 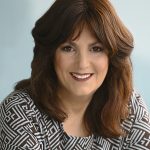 Liza Wiemer is an award-winning educator with over twenty years of experience. She is the author of two adult nonfiction books, as well as a young adult novel. She lives in Milwaukee with her family. Visit her at LizaWiemer.com and follow @lizawiemer on Twitter and @lizamwiemer on Instagram.