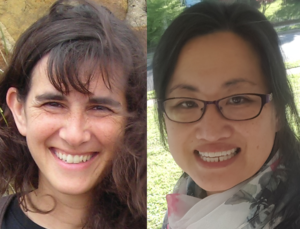 At the Gaithersburg Book Festival, Alex Rah interviewed Madelyn Rosenberg and Wendy Shang, co-authors of THIS IS JUST A TEST, on behalf of We Need Diverse Books.

Madelyn: We found it fairly easy. Our back and forth was pretty natural when we were writing it together. One of the things that worked really well for us was if you’re a writer and you suffer from writer’s block, it is really awesome to have a partner; as soon as you hit writer’s block, you can send it to the other person.

Alex: Was there a lot of arguing between you guys during this process?

Wendy: I don’t think there was a lot of arguing, partly because we were doing it for fun, and it was sort of a new adventure. We know each other from writers’ groups, so there is a lot of trust between the two of us because I’ve read Madelyn’s stuff, she’s read my stuff, so we were used to getting feedback from each other.

Madelyn: We might not agree on this one. I think it’s got – as many books do – more than one theme.

Wendy: So what’s the standout theme to you?

Madelyn: Well, the standout theme that you always say, which I agree with, is learning to find your voice and speaking up.

Wendy: Yeah, and you have to speak up to keep the peace sometimes. You can’t just cross your fingers and hope things will blow over and everything will be fine. You have to make noise and say hard things.

Madelyn: Yeah, and I think the other thing that is a theme that sort of comes through in the title or when they’re referring to the title This is Just a Test is that it’s not actually just a test. None of what we do is just a test. It’s just the things we’re doing now.

Wendy: Yeah, the things we do now matter. Everything you do matters. 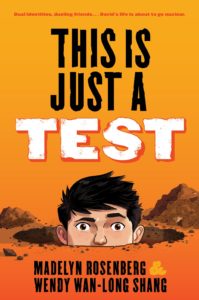 Madelyn: The label they put on the book was from ages eight to twelve. However, we have gotten [some] people saying maybe nine or maybe ten just because of a nuclear scenario.

Wendy: I think that’s just an outlier. The two main audiences are probably kids in the fourth, fifth, sixth, and seventh grade plus we’ve gotten tons of shout-outs from people our age, from our generation. We’re like, “Oh my gosh, I totally remember this. You completely nailed the eighties. I remember watching that movie. I remember dressing that way.” So it’s a little love letter to the eighties too.

Madelyn: There’s a film that [the characters] watch called “The Day After” near the beginning, and it’s a film that was on television, and when we were watching it on TV there were only three channels. Everybody watched this movie.

Wendy: It was terrifying. It framed our fears. I think it framed the way a lot of people were thinking, but at the same time, if you read some people’s point of views, they’ll say that’s also what started the move away from those weapons and trying to figure out how to not use them.

Madelyn: Yeah, the movie’s about what the world would be like if a nuclear bomb went off in Kansas.

Wendy: You know right now I’m reading The Art of War by Sun Tzu. I would love to meet him. It’s a book now. The way back they wrote it back then, they wrote it on bamboo strips and turned it into a scroll. That still counts, right?

Madelyn: The answer to question one is “yes.”

Wendy: Hell yes. I think the first wave of the impact of We Need Diverse Books was that there were more diversity panels, and people were more conscious to have that, but then I think quickly on the heels of that came that authors of colors don’t just want to be on diversity panels – we want to be on panels that discuss humor, plot, and character, and I think that’s been the second wave of We Need Diverse Books. First it was about giving us the vocabulary to talk about diversity and now we’re taking it to a broader scope.

Madelyn: Right, it goes from “We need to be aware of diversity,” starting with a diversity awareness campaign, which has been going on for a while, to just the fabric.