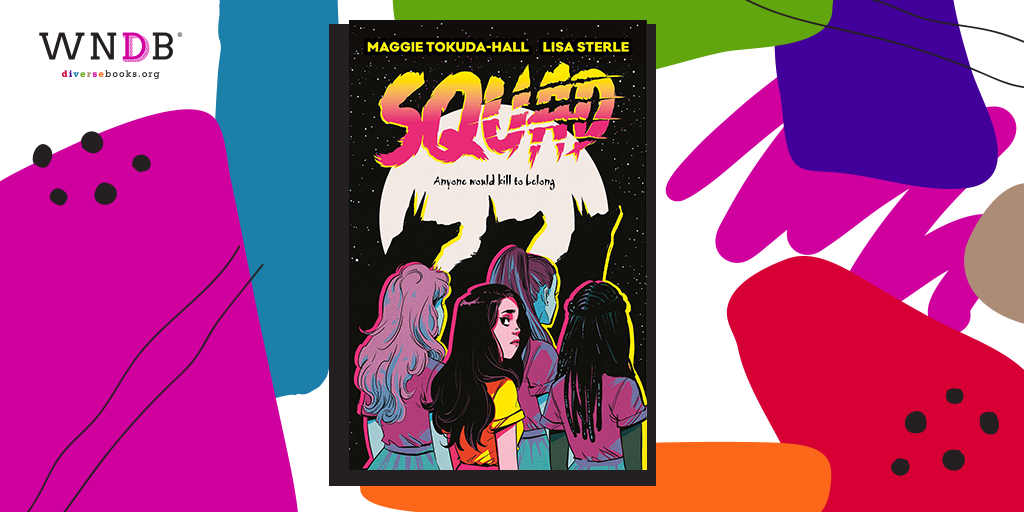 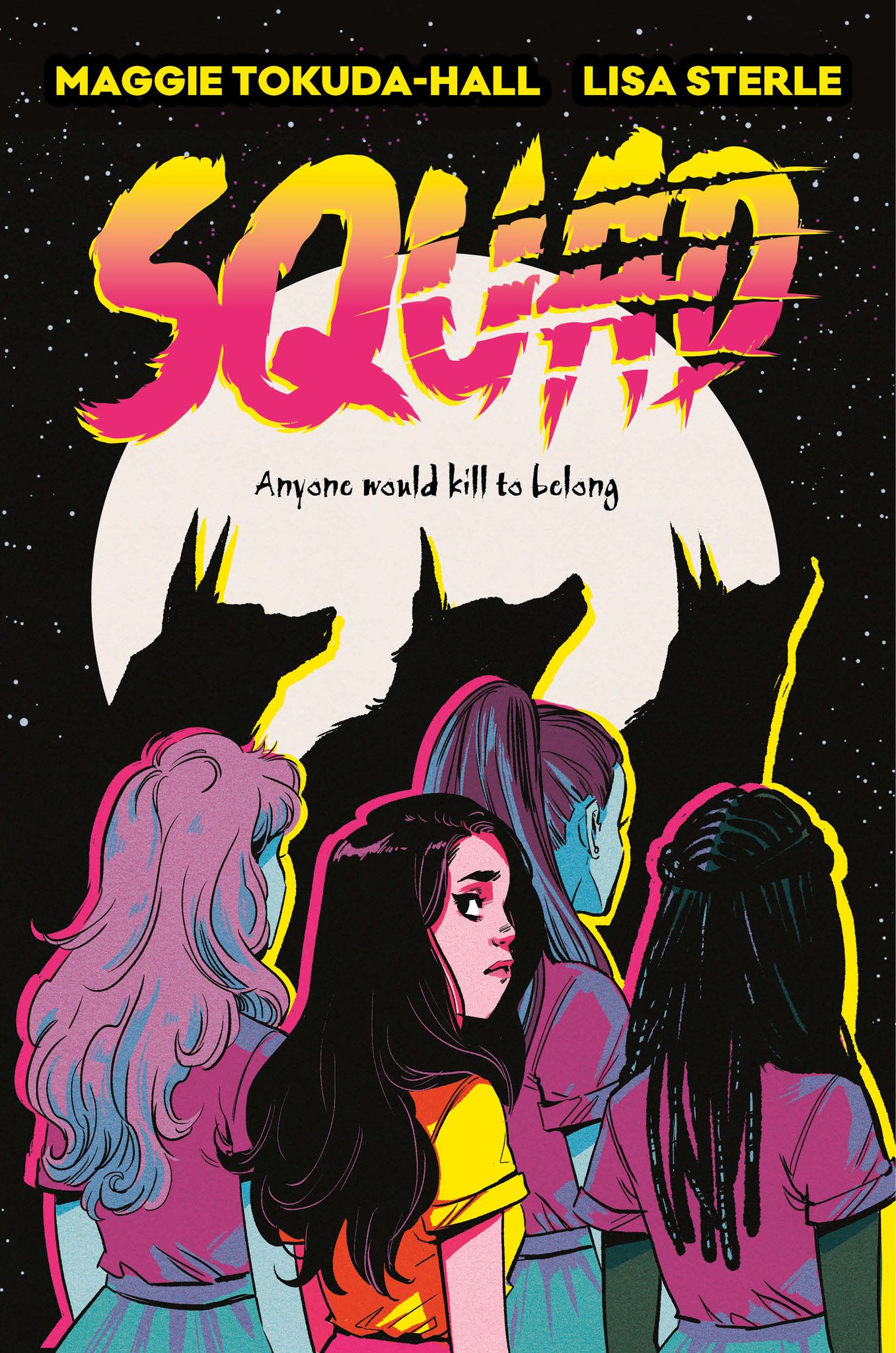 Your newest book Squad releases on October 5, 2021, and is a young adult graphic novel. You’ve previously published a picture book (Also an Octopus) and a young adult novel (The Mermaid, The Witch and The Sea). What’s made you experiment with different formats and audiences, and what was the inspiration behind Squad?

I was a children’s and young adult bookseller for close to a decade, so I love those books. It’s the only thing I consider my focus and like to choose the audience for a story I’m working on.

I went to Piedmont High School. Culture in Piedmont is demanding of girls to be down to party and hookup, but not too much. It was cruel and did a lot of damage to people. I knew I wanted to write about it. One day I decided on the theme of werewolves and realized graphic novels were perfect for that. I read a ton of comic books, but I was scared because I didn’t know how to write one. It turns out you can make it up as you go!

Where did the idea for werewolves come from?

It’s fun to root for the badies. We’ve been told there’s no right way to be a woman. It’s freeing to know the characters in Squad aren’t role models and you can still root for them.

Squad touches on a lot of important topics, like menstruation, high school cliques and wanting to fit in, coming out, rape culture, and more. That’s a lot to cover, but it has a natural flow.

Those things are so intrinsic it didn’t feel like packing things in. It was a recollection of how things really are. They’re things I remember; I wanted to include the things I remembered. Sharing a tampon with someone and feeling like “we’re in this together” is really real.

Rape culture is a burden to withstand and live in. I think that’s why I failed at writing about it so many times. I wanted to be able to talk about some of these things—Squad is a revenge fantasy. It’s campy and silly, but I was going for emotional realism while accomplishing a high camp plot. Humor is a way to cut through vulnerability.

The character Arianna reminds me of singer Ariana Grande—she has a sleek ponytail and exudes confidence. Were any of the characters inspired by real people?

Lisa Sterle (Squad’s illustrator) made the decision to have Arianna’s hair that way, and I love the implication that the character thinks of herself as Ariana Grande. She’s a girl molded after everyone whose approval I wanted and never got.

None of the characters is anyone specific, except for the reported Sherry Hu. She’s my godmother, my mom’s best friend, and a real San Francisco reporter. Marley, Amanda, Arianna, and Thatcher have traits I took from real people and shaped them for my story. Becca has elements of myself and my sister and is named after my best friend Becca. I took things from all three of us, the three women I know best in the world, and smushed us all together.

The scene with the giraffe murals is a real place. You can find the murals in an underpass going from Piedmont to San Francisco. (The mural Maggie references is called “Giraphics” by Bay Area muralist Dan Fontes.) 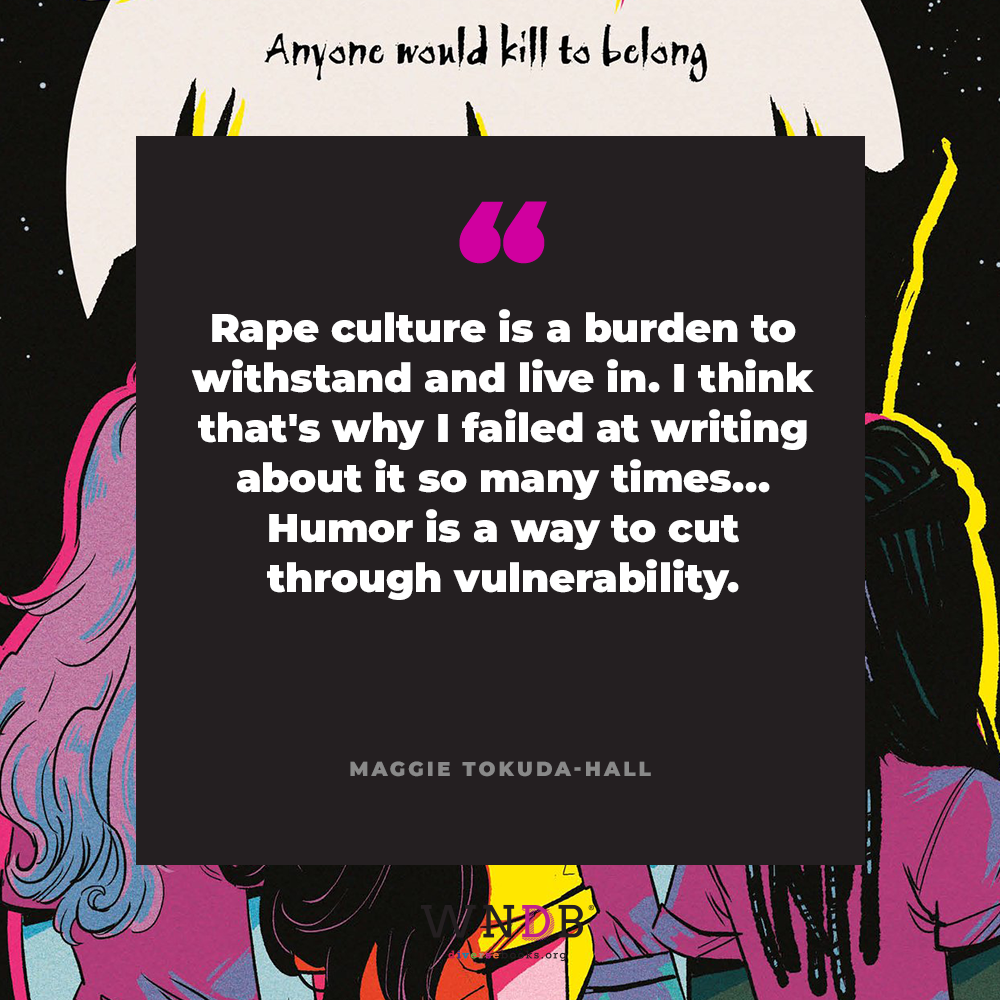 Squad is a diverse story, but it’s not a story about diversity. You wove it in wonderfully and I noticed some great details, like Amanda’s hairstyle changing from her natural curls to braids, and one of their teachers being named Mx. Wallace.

Amanda’s hair was all Lisa Sterle! I don’t even think of changing characters’ hair. The actual Piedmont isn’t terribly diverse, so why shouldn’t it better reflect the world I found as an adult? We’ve all heard enough stories about straight white people. Why would I, a person who is not that, write one of those stories?

What’s the process of working with an illustrator like? Do you select them, or does your agent/publisher?

I’m traditionally published, so it’s different than going with a comics publisher. My agent (Jennifer Laughran of Andrea Brown Literary Agency) sold the text to Greenwillow Books (a Harper Collins imprint). They found Lisa Sterle and asked what I thought. Lisa negotiated her own deal with Greenwillow Books, so we have our own separate deals.

Lisa is so good and talented. The beginning is all bright colors, but the colors change and darken as you read. She created the character designs and made some suggestions. Lisa’s first sketch of the character Marley is exactly what Marley looks like in the published book.

You have a BA. in Studio Art; would you ever do your own illustrations?

Oh no! I studied studio art (the creation of visual art), but I didn’t study illustration. I’m a much better storyteller than I am a visual artist. I was only interested in art because it allowed me to tell stories, and it became evident to me in college that I was only interested in telling the stories. My creative writing professor gave me an application for a summer writing program and there I realized I could talk about stories and never get tired of it.

How do you write? Can you walk us through your process from idea to release day?

Have you ever sneezed and had a good idea at the same time? Anyway, that’s what my drafting process is like. Then, because publishing and illustrating take a long time, you have a long time to wonder if you are, in fact, delusional and if maybe that sneeze knocked something essential and sensible loose. And then you have to self-promote your book, which basically just means hoping strangers will do it for you.

Your next book is Love in the Library, illustrated by Yas Imamura, coming in January 2022. It’s about a Japanese American couple who fall in love in a U.S. internment camp during WWII, and that couple is your grandparents. Is this a story they openly spoke about? What compelled you to use it as the plot for a children’s book?

My grandparents’ story is a story I grew up hearing a lot, though more from my mother than my grandmother. My grandfather, George, passed away when I was barely a year old. It’s rare that people who were incarcerated talk about their time in the incarceration camps, but I was lucky in a few ways. One, in that my grandmother did talk about it, and also kept a journal during her time there. And secondly, that my mother is a journalist. I’ve leaned on her a lot for this project.

I wrote the first draft of this book shortly after Tr*mp introduced the Muslim ban. I was furious. Scared. Horrified. I’m Jewish and I’m Japanese American, and that heritage has given me a rabbit’s sensitivity to state-sanctioned racism and violence. We do so much to sanitize American history, to hide the racist traditions that define this nation. I am uninterested in continuing that.

I love the story about my grandparents because it reminds me of a few things: That this is an inherently racist nation and, despite that, so many of us find love and joy. We are better than the systems that would dehumanize us, but that does not mean we are not responsible for dissembling those same systems. That is something I have found myself very eager to talk to children about.

Maggie Tokuda-Hall has an MFA in creative writing from USF, and a strong cake-decorating game. She is the author of the 2017 Parent’s Choice Gold Medal winning picture book, Also an Octopus, illustrated by Benji Davies. The Mermaid, the Witch, and the Sea is her debut young adult novel, which was an NPR Best Book of 2020. Her forthcoming graphic novel, Squad, will be on shelves Oct 5th, 2021. She lives in Oakland, California with her husband, son, and objectively perfect dog.

Ashley Wells Ajinkya is currently an Author Experience Manager at Kindle Direct Publishing. As an avid reader and book collector, she’s passionate about working with authors. Ashley is also a graphic designer and has degrees in Graphic Design, Art History, and Fine Arts. If she’s not working or reading, she can usually be found drinking an iced latte, digging through a thrift store, or planning her next trip. You can find her on Instagram at @waysofmagic.

Previous Post: « Cover Reveal for The Summer of Bitter and Sweet by Jen Ferguson
Next Post: Q&A With Lilliam Rivera, We Light Up the Sky »
Applications are open for Literary Agents of Chang