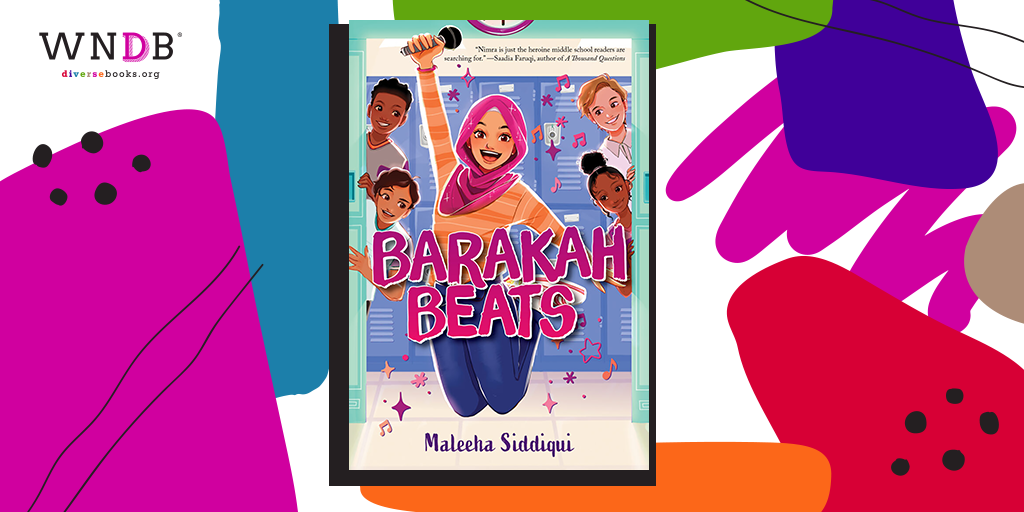 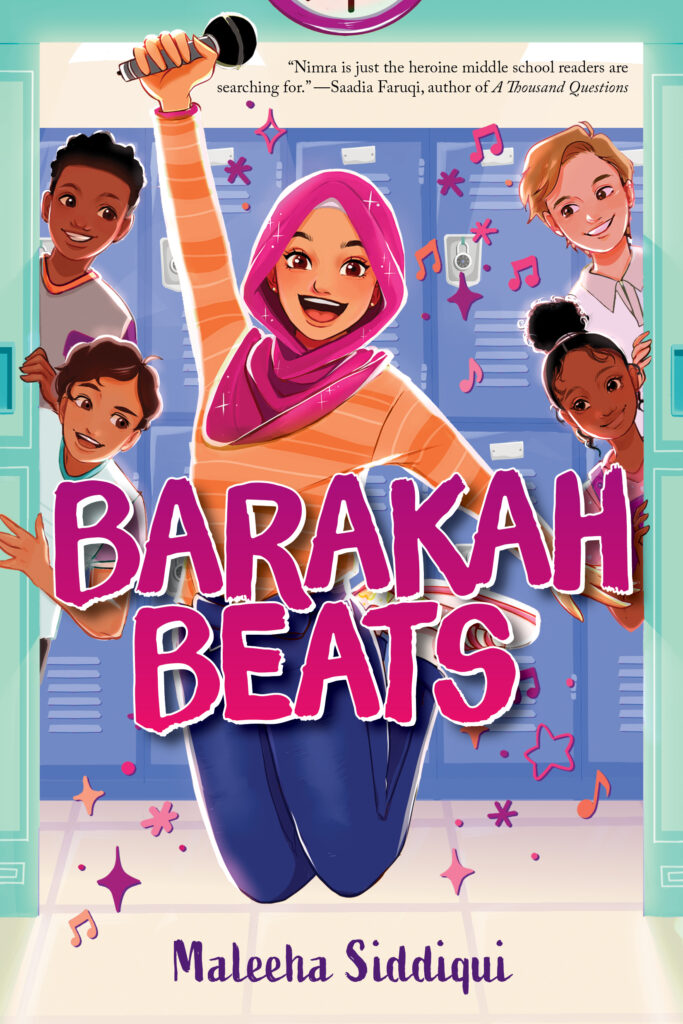 Identity and belonging lie at the heart of Barakah Beats. What made you choose religious identity as the anchoring force in the main character’s life as the keystone of your debut novel?

Religious identity, especially positive religious identity where the main character actively engages with religion and allows it to play a conscientious role in his/her life is still very rare in children’s literature. I know many kids like Nimra in my own Muslim community. They’re not hard to find; they’re just overlooked. I wanted to shine the light on these types of kids. As Muslims, we’re a multifaceted, diverse global population and constantly representing us through the same narratives was getting old. I thought it was time for a change. I wanted to show a character who loved her faith and whose faith played a big role in her life even as a young kid.

Nimra, the book’s central character draws deep strength from practicing her faith. Who and what was your inspiration for creating Nimra?

It was in equal parts the young version of myself—though I’ll admit that Nimra is a bit more secure in her faith than I was when I was 12 years old— and my own daughter as I hope to see her in the future. I’m a first generation Pakistani American Muslim like Nimra’s parents. And Nimra is a second generation Pakistani American Muslim like my daughter. Before I started writing Barakah Beats, I asked myself that if my child was 12 years old today, what would her life look like? Would my husband and I do a good job of ensuring that she’s proud of her identity? Would she view us as supportive parents who she knows would try and help her when she’s struggling instead of being afraid of how we would react? For a lot of practicing Muslims, our faith is our safe space. We talk a lot about culture versus religion. I believe culture consists of man-made customs and mindsets, many of which should honestly not exist. Many things in the Muslim culture do not tie in with our faith, and it is usually elements of our culture that drive people away from our faith.

As Nimra transitions to public school from Islamic School, she lands on her feet when she (accidentally) finds acceptance and belonging in the school’s Muslim Boy Band, Barakah Beats. While creating Nimra and her world, did you ever worry that her character might come across as somewhat insular even as she seeks acceptance for her way of life?

No, that never crossed my mind. Because my main concern was whether Nimra would find acceptance for her way of life by the other characters in the book and by readers at large. I think the concern of Nimra coming across as insular is a result of years of seeing the media stereotype faith-loving Muslims a certain way. The media shows individuals who are visibly Muslim as being extreme. But that is not the case. Faith-loving, practicing Muslims are regular folks who have families and loves ones and go to work. The reception so far from both Muslim and non-Muslim early readers of the book has been so heartwarming. It gives me a lot of hope that more stories like this will be acquired in the future. 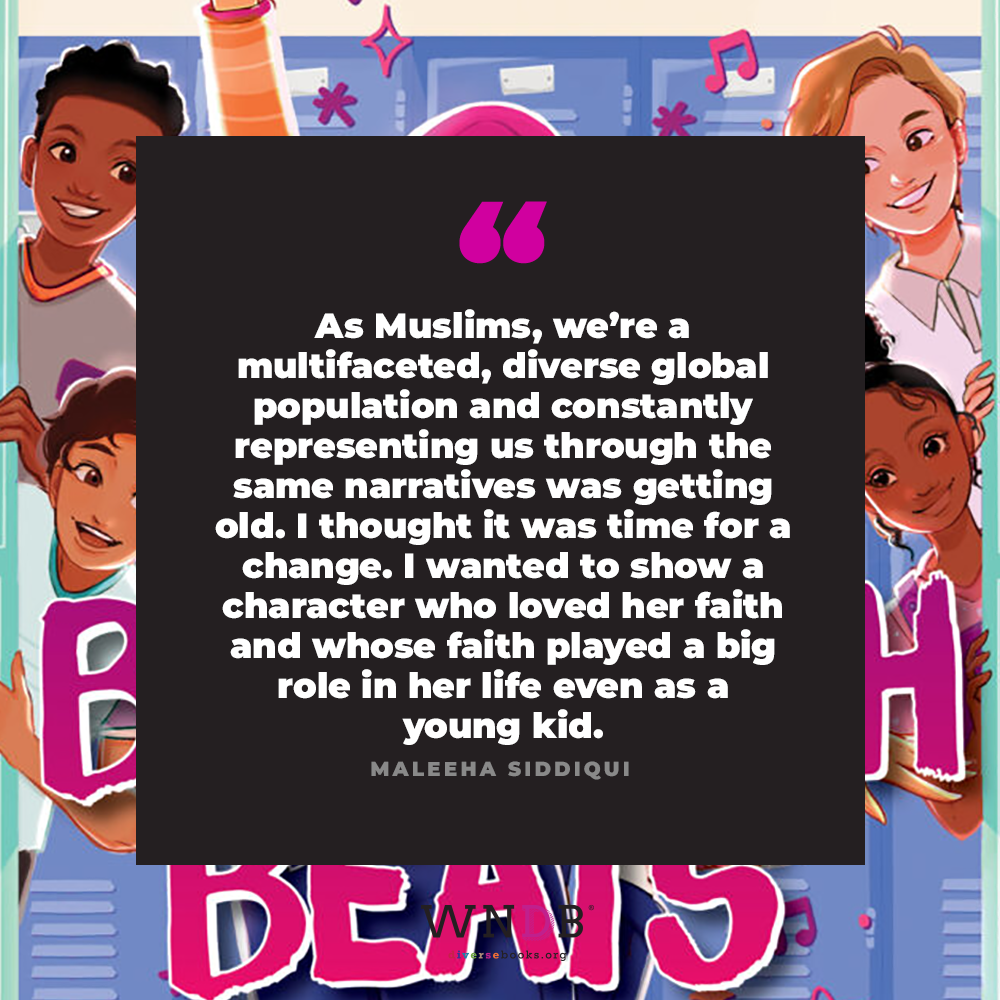 I grew up in a relatively conservative, yet deeply loving and supportive middle-class family in India. I see a lot of my parents in Nimra’s parents: They want to support their daughter and give her the wings to fly and are yet are afraid she might fly too far from the fold of the traditions they hold so dear. Did you see any contradiction in having Nimra conform to her faith in strong and deep ways, while still being able to eventually stand up to her parents?

No, not at all. We are all taught to respect our parents, but at the end of the day, it is true that they are also human beings fully capable of making mistakes. Even though they want the best for their kids, they are fully capable of not knowing what that is. If you pay close attention, Nimra’s parents are the same way with her grandmother. They push back on certain things, but that doesn’t mean they don’t love their parents. And it certainly does not mean that they are not connected to their faith. Being close to your faith does not mean you have to conform to what your parents want of you.

What is the one thing you’d like young readers to take away from Barakah Beats?

From a craft perspective, what drew you to writing a contemporary middle-grade story as opposed to another genre, say contemporary or fantasy YA as your debut novel?

I grew up reading mostly YA fantasy and the staple middle-grade fantasy that probably everyone’s read. I thought that’s what I would end up writing. But I realized I don’t yet have the craft level needed to write fantasy. I had my daughter in 2017. Having a child of my own led me to think about her future and the kind of stories I would like for her to see herself in. I originally thought of Barakah Beats as a YA story.

But as I started reading books like Amina’s Voice by Hena Khan, Amal Unbound by Ayesha Saeed and Front Desk by Kelly Yang, I fell in love with the middle-grade genre—the voice, how heartwarming the stories are, and how they can tackle such serious topics with a deft hand. When I dug into Nimra’s emotional arc and what I wanted her to learn as she went on her journey, it struck me that Barakah Beats might fit the middle grade narrative a lot better than it fit the YA or adult age range. Plus, contemporary as a genre comes a lot easier to me because it represents the familiar.

What are you currently reading? What are some of the books— both upcoming and forthcoming—on your list of recommended middle-grade reads?

I’ve been reading a lot of narrative nonfiction. The two books I’d recommend in this category are: All Thirteen: The Incredible Cave Rescue of the Thai Boys’ Soccer Team by Christina Soontornvat and The Curse of the Mummy by Joyce Hannam. I also love A Place at the Table by Saadia Faruqi and Laura Shovan and A Thousand Questions by Saadqia Faruqi. I’ve also been reading horror. Two books I recommend are: The Girl and the Ghost by Hanna Alkaf and Hide and Seeker by Daka Hermon.

Do you have any words of advice for aspiring middle grade authors?

Read a lot of recent middle grade books. Read widely. If you aspire to be a contemporary writer, then read in that genre but it also helps to branch out to other genres, for example novels in verse or contemporary thrillers. Also remember that tweens today and their lives are very different from when we were tweens. A lot of things are different sociologically and technologically. They are a lot smarter than adults give them credit for. They are emotionally complex and have the capacity to understand serious topics.

What does a satisfactory writing day look like for you?

I know a lot of writers use word count as their mile marker. I am a slow writer; even with everything planned out, a productive writing day amounts to somewhere between 1,000 and 1,500 words. And that’s on a very good day. A good writing day could also mean untangling a plot you couldn’t figure out before; suddenly, the floodgates open and the story is so much easier to write. A good writing day could also just be you daydreaming the whole time, walking through scenes in your head and trying to figure out where you’re going to go and how you are going to move forward because getting stuck is very demoralizing. A bad writing day is just me not writing.

Parul Sharma grew up in Shimla, a city in North India that was once the summer capital of the ruling British. Her first love is writing children’s and young adult stories about the trials and triumphs of memorable characters as they go about finding their place in the world. She believes nothing stirs the soul and builds empathy for worlds outside our own experiences like a well-told story. Diversity in children’s literature is close to Parul’s heart—every child’s story is important enough to be told.  Parul is a graduate of the Institute of Children’s Literature and a member of the Society of Children’s Book Writers and Illustrators. She is a creative writing mentor at WriteGirl, a Los-Angeles based creative writing and mentoring organization that promotes creativity and self-expression to empower teen girls. Her writing has been published in Cricket Magazine. She lives in Los Angeles.

Maleeha Siddiqui is an American writer of Pakistani descent who loves to tell unapologetically Muslim stories for all ages. By day, Maleeha works as a regulatory affairs professional in the biotech industry. She grew up and continues to reside with her family in Virginia. When she’s not working, reading, or writing, she likes to try new food and snuggle cats. Barakah Beats (Scholastic 2021) is her debut novel.