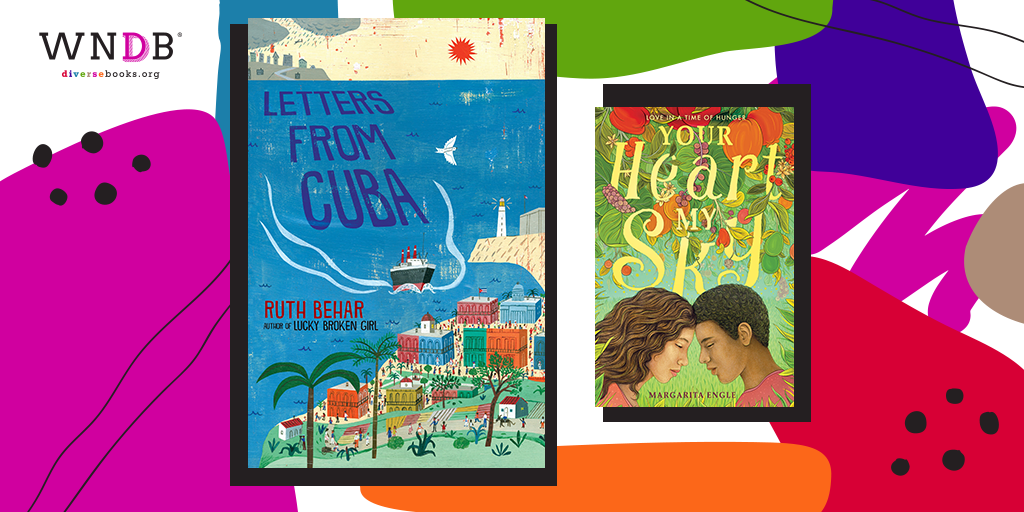 Today we’re pleased to welcome Margarita Engle and Ruth Behar to the WNDB blog to discuss their books Your Heart, My Sky, and Letters from Cuba! 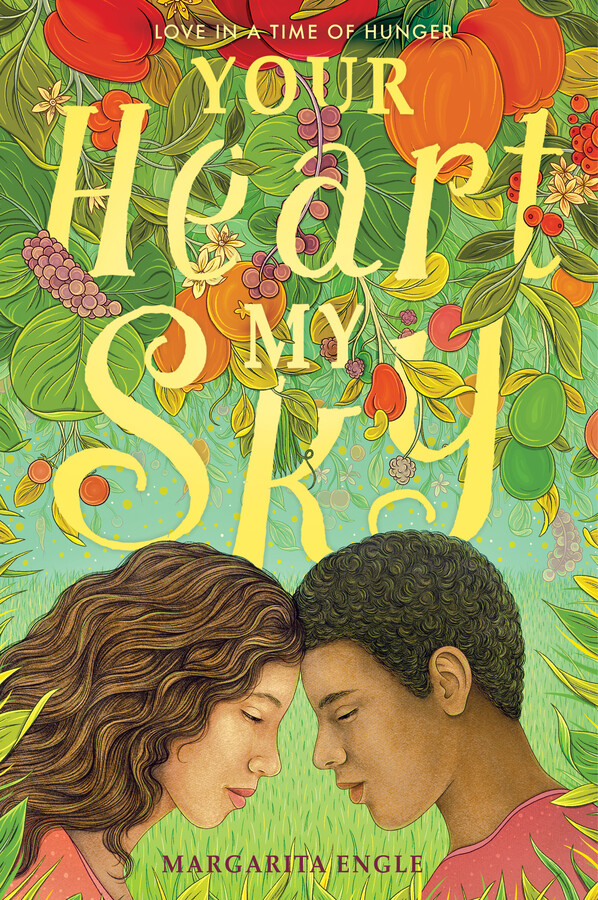 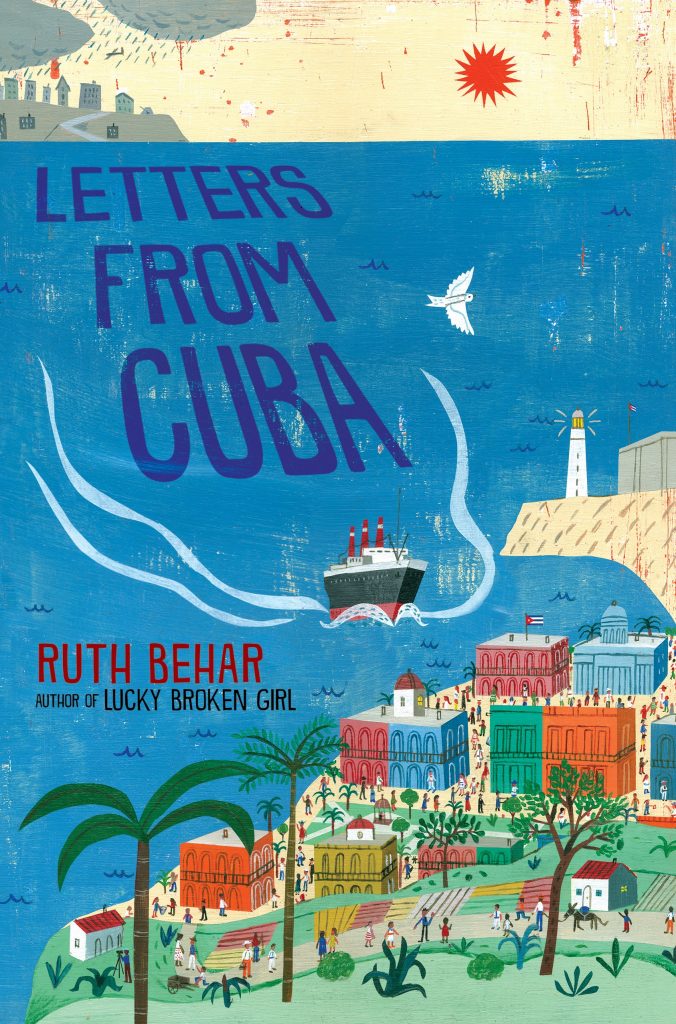 Cuba is just 90 miles from the US and yet Americans know so little about it. Much of what they do know is inaccurate. Why do you think it’s important for young people to know about Cuba through stories?

Margarita: Cuba is one of the closest neighbors of the US. It just seems like neighboring countries should learn how to be friends. Older generations have done such a terrible job with peacemaking that young people will be the ones who have a chance to normalize relations between the two countries.

Ruth: I totally agree with you, Margarita. As storytellers, we are also cultural ambassadors who can play an important role in changing the narrative around Cuba and giving young readers a deeper understanding of this country that is close to our hearts and both so close and so far.

What little Americans do know about Cuba tends to be from the period of the Revolution. Both of your stories come from periods before and after that time. In your work, how did you strive to give a fuller picture of the breadth of Cuban history beyond the narrow window some Americans are familiar with?

Margarita: Other than my verse memoir, Enchanted Air, I have avoided setting stories within the revolution because they would be so divisive between the liberal (California) and Miami (conservative) branches of my Cuban American family in the US. Also, I am fascinated by the less well-known aspects of history, especially those which involve women’s history.

Ruth: In my first middle-grade novel, Lucky Broken Girl, I tried to represent a Cuban family recently arrived in New York in the 1960s. It was important to me not to show them in isolation, but as immigrants in contact with other immigrants from various countries, including India, Mexico, and Belgium, all of whom live in the same neighborhood. In my recent novel, Letters from Cuba, I wanted to shed light on Jewish immigration to Cuba in the 1930s, on the eve of the Holocaust, a story that is not often told, of how Cuba became a refuge for Jewish immigrants at a time when they were unwelcome in the United States. Hopefully, these stories give readers a more layered view of Cuba and its diaspora.

Young people don’t have the same associations with Cuba that their parents or grandparents did. By sharing your story, what do you hope their association will be with Cuban people and their culture?

Margarita: I hope young people will read with empathy and compassion.

Ruth: Yes, I feel the same. 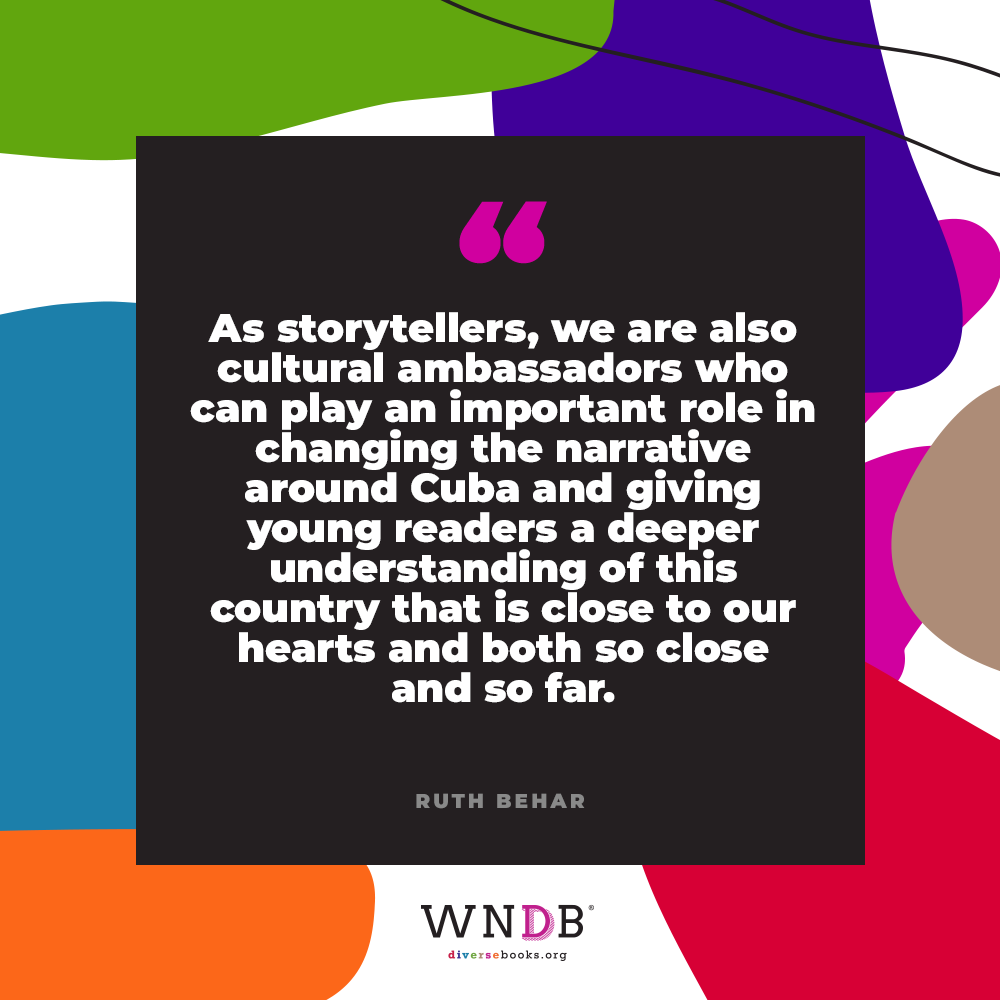 What makes fiction (as opposed to non-fiction or memoir) a uniquely powerful way for young people to learn about Cuba?

Margarita: I think verse novels are especially suited to conveying the emotional essence of historical events.

Ruth: I love your verse novels, Margarita! It’s amazing how in your recent verse novel, Your Heart, My Sky, you offer such a beautiful story of a painful time of hunger and desperation in Cuba in the early 1990s when so many Cubans fled the island on makeshift rafts. I don’t know if I’ll ever be able to write verse novels myself—you would be my model if I ever did—but through fiction, I try to create characters that young people can identify with, so they can travel to Cuba via their imaginations.

Margarita: I have a question for you, Ruth. As a writer for both adults and children, your books range from memoirs to fiction, poetry, and essays. How do the books for children differ from the others? Do you find them easier or more difficult to write?

Ruth: The books I write for children because they are fiction, have given me the freedom to fill in gaps in the historical record with my imagination. I love being able to create dialogue for my characters, rather than having to draw on notes or recorded interviews. I feel there’s a certain magic in writing for young people because you’re relying on your memories of childhood innocence when you approached the world with fresh eyes. Though I often draw on research when I write for young people, I try to make the ideas accessible by creating stories that seek to open their hearts to the experiences of others. I’d say that writing books for children is neither easier nor more difficult—it’s a different process.

Margarita: Following on that, I have another question for you, Ruth. Your background as an anthropologist must make research a very familiar process. Do you have any tips for those of us who write historical novels that require research?

Ruth: As an anthropologist, I was always told to write lots of fieldnotes, since you never know what you’re going to need when you actually sit down to write. So that’s what I’d advise: take notes on everything that you find interesting as you do your research—either by hand in a notebook or on your laptop. That way you’ll have plenty of material to draw on to give your writing the texture of the historical moment you’re trying to capture.

Ruth: I have a question for the two of us. We both travel back and forth to Cuba despite difficulties. In what ways do our children’s books become bridges between the two countries?

Margarita: I hope my books will help, in some small way, to bridge the gaps of understanding and emotion between Cuba and the US, and especially between Cuban Americans and Cubans. I’m grateful for the beautiful translations by Alexis Romay, which make most of my recent books available in Spanish. I’m also grateful for the work of brilliant illustrators such as Rafael López, Raúl Colón, Sara Palacios, and Edel Rodríguez, who help make my words visible to readers in such unique ways, and to perceptive editors—especially Reka Simonsen—who guide me toward clarity instead of confusion.

Ruth: I think it’s so important that your books are available in Spanish. That is so wonderful! I too hope that through children’s books I can help to create bridges of understanding between Cuba and the United States. I believe that when we offer vivid stories of lived experiences with complex characters, young readers can reflect on what cultural heritage means and why it’s such an important part of our identities. I feel it’s important for kids to know about Cuba before they get to college, so they can develop nuanced ideas of the country and its people and resist forming stereotypes. I am fortunate to have Nancy Paulsen as my editor who understands the importance of offering children a wide variety of diverse cultural and historical perspectives.

What’s next for you? Are you planning more children’s books inspired by your own family history? What can you tell us about the emotional aspects of those semi-autobiographical projects?

Margarita: My 2022 young adult verse novel is Rima’s Revolution, about the women’s suffrage movement in Cuba during the 1920s and 1930s. Campaigning for the right to vote was combined with struggles against the tyranny of a dictator, as well as simultaneous struggles to change laws that discriminated against illegitimate children, and allowed men to legally kill their wives or daughters if they caught them with a lover. This book required a lot of research!

My forthcoming picture books are A Song of Frutas, illustrated by Sara Palacios and translated by Alexis Romay as Un pregón de frutas. It is a celebration of the singing vendors of Cuba, and a plea for normalized travel.  Light for All, illustrated by Raúl Colón, is a tribute to the freedom and equality represented by the Statue of Liberty.

I’m also working on a number of STEM stories, including a nonfiction National Geographic picture book about sloths, some biographical picture books about scientists, and a middle grade verse novel.

Ruth: My first picture book, Tía Fortuna’s New Home, is coming out in January 2022, in English and Spanish. Margarita, you were so kind to read an early draft, thank you so much! Right now I’m at work on a new middle-grade novel based on the history of the paternal Sephardic side of my family. Writing semi-autobiographical stories forces me as a writer to dig into memories, sorrows, and dreams. I’m calling to the ancestors and letting them know I haven’t forgotten them. It’s emotional in that the words seem to come not from the rational mind but from a part of me that was mute and has now found a way to speak. There’s urgency in this writing. When I see the words on the page what I feel is huge gratitude. 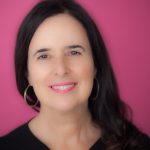 Born in Havana, Cuba, Ruth Behar grew up in New York. She made her fiction debut with the Pura Belpré Award-winning Lucky Broken Girl. Her new middle-grade novel, Letters from Cuba, is inspired by her grandmother’s escape from Poland to Cuba on the eve of WWII. She has a picture book, Tía Fortuna’s New Home, forthcoming with Knopf.
****** 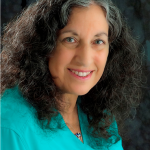 Margarita Engle was born in Los Angeles but developed a deep attachment to her mother’s homeland during childhood summers on the island. She is the author of many award-winning verse novels, memoirs, and picture books, including The Surrender Tree, Enchanted Air, Drum Dream Girl, and Dancing Hands. Her most recent books include Your Heart, My Sky and A Song of Frutas.

Previous Post: « Cover Reveal for You Are Not Alone by Alphabet Rockers, Illustrated by Ashley Evans
Next Post: Q&A With Tanaz Bhathena, Rising like a Storm »
Congratulations to the 2023 #ALAYMA winners and ho