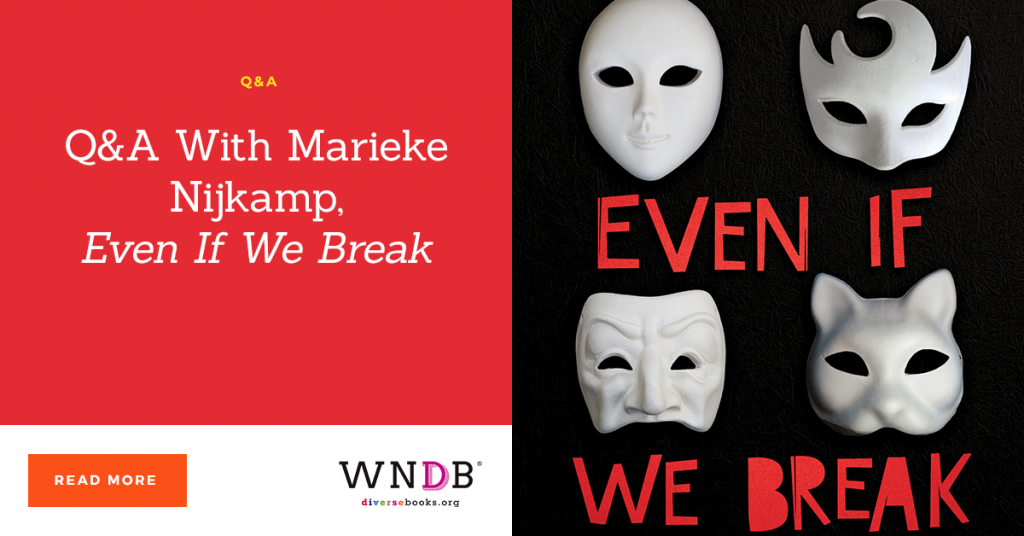 Today we’re pleased to welcome Marieke Nijkamp to the WNDB blog to discuss her YA novel Even If We Break, out September 15, 2020! 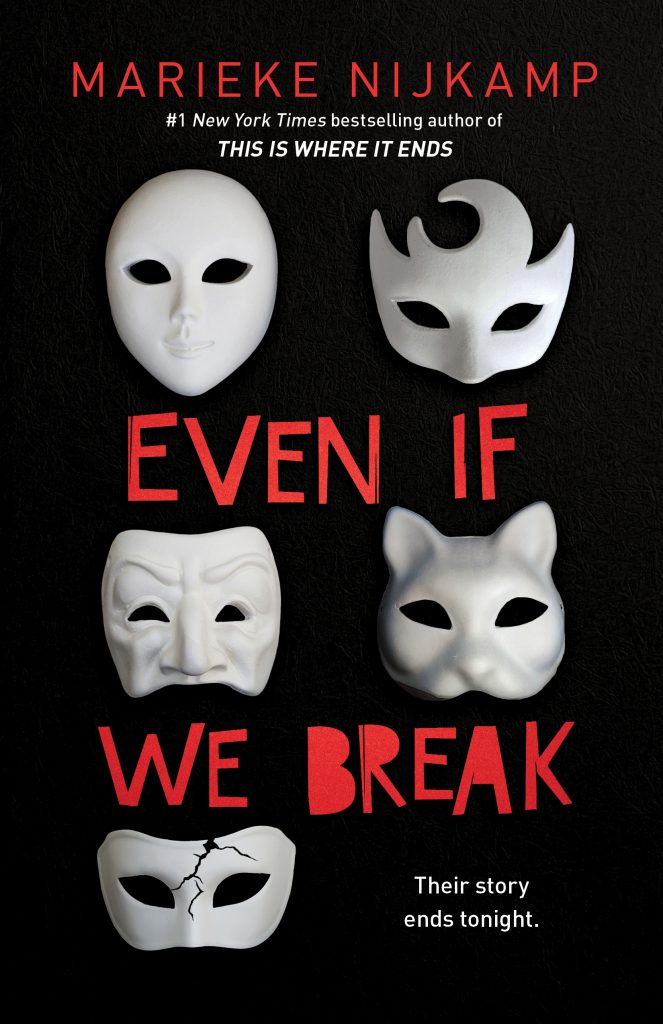 FIVE friends go to a cabin.
FOUR of them are hiding secrets.
THREE years of history bind them.
TWO are doomed from the start.
ONE person wants to end this.
NO ONE IS SAFE.

Are you ready to play?

Why did you decide to write Even If We Break in a multiple POV style? Whose was the most difficult perspective to write?

I love writing multiple points of view because I love seeing how different perspectives change a scene, how one person can feel entirely at ease while someone else is haunted by the same situation. I love how all of these characters inhabit the same world—and a shared world at that—even while they exist in completely different realities too.

As for whose perspective was the most difficult to write… Hm, probably Carter? For a variety of reasons. He has a very different outlook on the world than I do, so it took more time adjusting to that. (But that’s also the fun of writing different perspectives!)

The novel heavily features role-playing games and the fandom and community around them. How much did you know about role-playing before this and did you have to do any research?

I’ve wanted to write a YA book that features RPGs for a good while now (and if you read my other books, you’ll find there’s always a mention of gaming groups and RPG culture, so it can’t have come as too much of a surprise). I’ve played RPGs since I was a teen, starting with a thief in Advanced Dungeons & Dragons, second edition, and going through the various editions and many other systems from there.

I loved that unlike most thriller/horror novels and movies, Even If We Break features several marginalized protagonists, including an autistic character and a trans disabled character. Why is it important that horror narratives show marginalized people—and not just as token characters who are always the first to die?

But beyond that, horror narratives are narratives about marginalization. About responsibility and complicity. This one is no different.

Each of your main characters struggles deeply with something that winds up becoming a danger to them over the course of the book, but I was particularly struck by Maddy’s addiction. Why did you want to portray an autistic character struggling with addiction and why in a thriller (where anything portrayed as a ‘weakness’ is there for the antagonist to exploit)?

It made sense for the character. Maddy lives with chronic pain following a car accident. She lost her ability to play sports. She lost her sense of normal. She was floundering, she’s struggling, and trauma is a hard thing to process with an autistic mind. She needed something to help her get back a semblance of control, and her painkillers made her feel like they did. Of course, addiction is quite the opposite of control, but that’s part of her journey.

And yes, that makes it a weakness to exploit. Especially so because she keeps is a secret. But I didn’t set out to write it—or any of the characters’ struggles—for that reason alone. I wanted to give Maddy an arc that would make sense based on who she is, how she looks at the world, and what makes her tick. Her struggles are personal, and that’s what makes them important.

In addition to that, there’s also an element of… it’s rare to see autistic characters in fiction struggling with anything but social interaction. We’re often portrayed as quite naïve, when in fact our lives are as complex and as complicated as neurotypical people’s. I wanted to reflect that with Maddy’s tale.

This is as much a book about community, chosen family, and friendships as it is a thriller. Why did that feel like a natural center of these characters’ journeys?

Because to me, all those things are quintessential parts of being queer, of being disabled, and also of playing RPGs. (Perhaps that’s just my anecdotal experience playing with very queer groups, but honestly, I don’t think so. I think—at least to some extent—it’s true for every group that plays well together.)

Plus to me as a person, those relationships matter. They’re the bonds that form us, the people that shape us, just as much as familial and romantic relationships. I love exploring that in fiction.

I also loved that one of your POV characters, Ever, is low-income and doesn’t know if they want to go to college because they want to work and support their family. Why did you want to portray that in a YA novel? How did you contrast that with your writing of Liva and Carter, who are much more financially privileged?

It’s not just Ever’s story, but the story of many teens. Not everyone goes to college, not everyone has or can make that choice. And I think it’s important to reflect that.

Just like I felt it’s important to reflect that poverty isn’t just about money. It becomes a part of every aspect of life. And that’s something Carter and Liva fundamentally do not understand. No matter how close they all are. But it’s even something Maddy and Finn don’t always get.

Because they don’t talk about it. Because they don’t know how to talk about it. Or because they have different expectations of “normal.” Perhaps if there’s one thing I hope to do with the different viewpoints (and all the various contrasts) it’s to challenge the idea that some things are essentially the same for everyone. They’re not, and that can be okay. But how they’re different, whether that’s okay, and what that means, that’s all necessary to explore.

Are you a plotter or a panster? Did that change with this book or did you stick to your usual writing process?

Plotter all the way. I need to know what happens in the book, and ideally in as much detail as possible, to be able to write it. I love hearing from authors who discover their books as they’re writing them, but I’m definitely not that person. I have outlines (that are getting increasingly more detailed every book I write), character descriptions, timelines, all that good stuff.

To some extent, I think, it also helps me to not get lost in the details. Because autistic brains can be wonderful at focusing on every. single. tiny. detail, it’s super helpful for me as a writer to have a roadmap for where to go next. (And then go back to obsessing about the details in edits, of course.)

What other books do you think Even If We Break is in conversation with? Do you have any recommendations for published or forthcoming books?

It’s in conversation with every book by an autistic author with an autistic character because if it wasn’t for books featuring autistic characters written by autistic writers, I wouldn’t have been able to explore Maddy’s story the way I did. Books like Elle McNicholl’s A Kind Of Spark, which is middle grade, are nothing at all like Even If We Break, but it features two of the best autistic characters (sisters!) I’ve seen in fiction in a long time.

Similarly, it’s in conversation with many trans and nonbinary characters, because I wouldn’t have figured out who I was without them. Shout out in particular to Amy Rose Capetta, Cory McCarthy, Anna-Marie McLemore, Kacen Callender, and Mark Oshiro, all of whom write characters that make YA infinitely better.

It’s in conversation with every geeky book out there, so I would be remiss if I didn’t mention Francesca Zappia’s Eliza and her Monsters, which is a must-read if you love books about fandom, anxiety, and love in many forms.

And of course, I should mention a thriller or two. So here are two of YA’s Queens of Thrillers: Karen McManus and Stephanie Kuehn. Read their books. (But make sure to keep your lights on.)

What question do you wish you were asked more often (and why)?

Want to play an RPG with me? 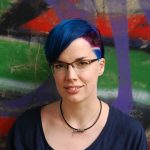 Marieke Nijkamp is the #1 New York Times bestselling author of This Is Where It Ends and Before I Let Go. She is a storyteller, dreamer, globe-trotter, geek. She holds degrees in philosophy, history, and medieval studies, has served as an executive member of We Need Diverse Books, and is the founder of DiversifYA. She lives in the Netherlands. Visit her at mariekenijkamp.com.