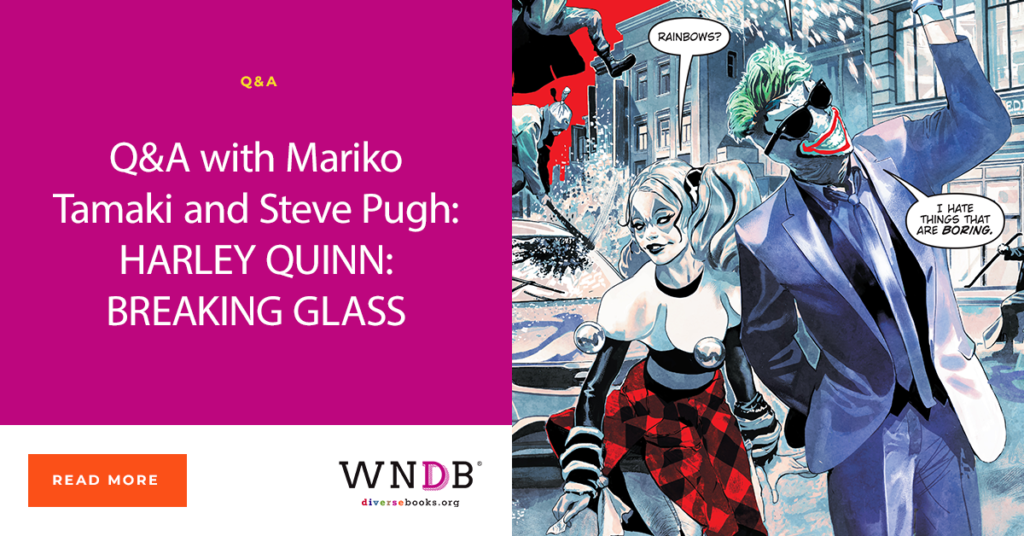 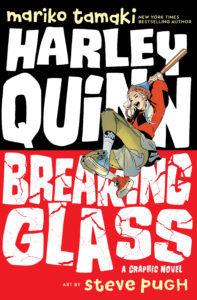 HARLEY QUINN: BREAKING GLASS is a coming-of-age story about choices, consequences, justice, fairness, and progress and how a weird kid from Gotham’s poorest part of town goes about defining her world for herself. From Eisner Award and Caldecott Honor-winning author Mariko Tamaki (This One Summer, Supergirl: Being Super).

Harleen is a tough, outspoken, rebellious kid who lives in a ramshackle apartment above a karaoke cabaret owned by a drag queen named MAMA. Ever since Harleen’s parents split, MAMA has been her only family. When the cabaret becomes the next victim in the wave of gentrification that’s taking over the neighborhood, Harleen gets mad.

When Harleen decides to turn her anger into action, she is faced with two choices: join Ivy, who’s campaigning to make the neighborhood a better place to live, or join The Joker, who plans to take down Gotham one corporation at a time.

HARLEY QUINN: BREAKING GLASS is at once a tale of the classic Harley readers know and love, and a heartfelt story about the choices teenagers make and how they can define–or destroy–their lives.

Tell us about the work of creating HARLEY QUINN: BREAKING GLASS. How did you collaborate with Steve Pugh? What was your creative process?

Mariko: This was a very mediated process. I sent a script to DC, we edited, sent it to Steve and eventually got pencils and inks back. In fact, the first time I personally spoke with Steve was only a week ago. We communicated largely through our editor Marie Javins. And a little on Twitter on the side.

What was it like illustrating this story and collaborating with Mariko?

Steve: Very intense actually, Mariko’s script was so perfect I really just ran with it, she developed this lovely “voice” for Harley that painted the character so vividly that I could literally see her before I started the art.

Being a project outside the DCU meant I could be more experimental with the art and color and create our own look for Harley’s world. The huge page count was initially daunting, but I’ve probably never enjoyed working on a book more, and you’re getting a LOT of Harley!

Mariko created a book with a good heart, and it was important to really support that in the art and give every character their due.

Tell us what it was like to work on a story with a universe and characters that are already so well known to many readers. How did you reimagine Harleen in the world of your graphic novel?

Mariko: I think the main thing is to find a middle ground between finding new interpretations and keeping the character legible as the character that everyone knows and loves. The heroes and villains of the DC universe have fabulous quirks, distinct personality traits, and I see my job as finding new histories that connect with that personality. My re-imagining was mostly around Harley’s origin, finding new people, new elements that connect with how she developed her Harley Quinn identity. Also, my goal was to make it something that felt like a YA story.

Steve: I really took my cues from Mariko, I listened to the dialog, and let myself imagine the movie. I believe I do my best work when I design right on the page. I put a look together while the characters are “acting” rather than hope a character sketch will work when it’s actually in the story.

Harleen’s costume grows out of the clothes she’s wearing and the rooms she swipes stuff out of, it’s very organic. She has several looks through the story, and they kind of reflect where her mind is at that time, as she finds out more about herself.

Ivy’s design was very grounded in her backstory of her work in the community garden and her activism, a practical threadbare sweater and cool boots, with this beautiful, earnest face.  The queens were so awesome, I had a blast with their costumes, and they were terrific to draw in a crowd because of all their differing personalities. The cast are wonderful characters, and I’ve spent a lot of time with them, the friendship between Harley and Hello Dali was especially a highlight for me and very fun to draw. Mariko originally started in prose and she can paint a very vivid picture with a few lines of dialog, I just made it happen.

I had a few ideas for our version of The Joker, his look is scary and weird, but very grounded in the materials the character would have available to him. His head is based on a ransom note. 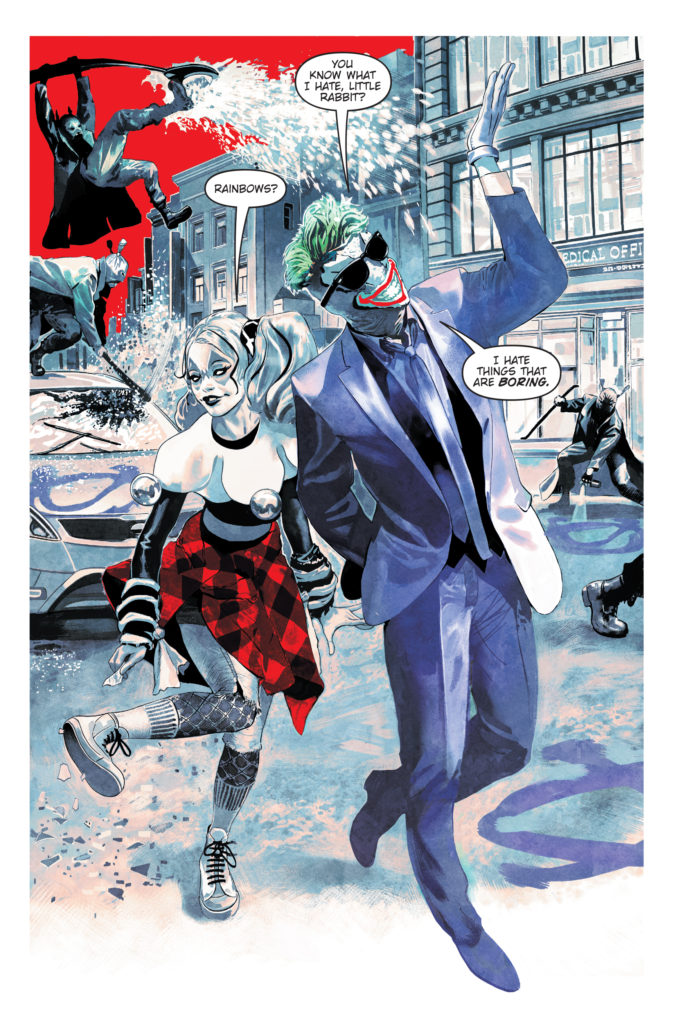 What do you hope connecting with Harley’s story will teach readers about her, both readers new to Harley Quinn and those familiar with her?

Mariko: I hope this comic will create a space for thinking about the kinds of decisions we put in the hands of heroes. Also, what it means to try to make the world a better place. This is a comic about a character’s desire to do the right thing in a tug of war with her desire to do what feels right and good to her, which I think a lot of people can relate to a hero or not.

What was your experience with Harley Quinn before working on this project? Did you have to do a lot of research, or were you a fan previously?

Mariko: I have been a fan of Harley in her multiple movies, animated, and comic incarnations. I did a little research but more for the gentrification storyline.

Steve: Massive fan. I’d actually written a Harley two-parter drawn by Phil Winslade for DC’s Convergence event, but I’d only got to paint her on covers up until now. Harley’s history is strange, and I think it’s a tribute to the brilliance of the character that she could start off in the elegant Bruce Timm animated universe and make her transition into the grit of the DCU through sheer force of popularity with both the fans, writers and artists.

I think everyone has their own take on the character, but Mariko’s focus on her force of nature personality, wide-eyed intensity, and fierce loyalty really connected with me. I felt this was a Harley I wanted to hear about and was entirely why I wanted to be the artist on this book.

Why do you think Harley Quinn’s story translates so well to the graphic novel format?

How did you navigate visual representation on the page in BREAKING GLASS? Was it challenging to work with characters that exist in canon and did you reimagine any in new ways?

Steve: There’s a lot of character acting in Breaking Glass, a lot of body language and emotion (both extreme and subtle). That made it a real challenge, but also much more exciting as an artist to draw than 200 pages of “grr” faces. Probably the only thing I knew I needed to do was handle the color modeling myself, so I could give the faces a level of refinement that isn’t normally possible.

It’s art nerdy, but just getting a dimple in the wrong place can ruin a face and here we were telling the reader a lot through expression as well as dialog. The coloring does a lot of work in our story, we move from blues to almost full color, each transition highlighting a story point or attracting attention to an important moment.

The story is strongly tied to issues of gentrification and class. Why did you want to bring this to life for readers? Why is it so important to teens today?

Mariko: The changing livability and affordability of cities is something affecting a lot of kids and teens. It’s an issue that hits close to home because it is your home, your neighborhood, your school, your world really. It can be frustrating but also a matter of survival. So, it seems like a pretty suitable subject for younger readers and for a story about a younger hero.

Harleen has a strong sense of found family. How did you explore this in BREAKING GLASS? What does found family mean to you?

Mariko: As a member of the LGBTQ+ community, the idea of the found family is one very close to me. I am a part of found families, queer communities. I think the way queers create and recreate their worlds is an important part of our history. It also meant a lot to me to create queer characters that represent different generations in this book and highlight their different experiences.

Harley is a character that often gets a bad reputation in various depictions. Did you lean into this or set out to change people’s minds? How did you bring new dimensions to her and make her into a flawed, authentic character for readers?

Mariko: The thing I have always loved about Harley is what has seemed to me to be her independent spirit, her unique world view.  It’s nice to write a character who is wildly unbothered by other people being bothered. I loved it. I didn’t think of Harley as a hero or a villain. I saw her as someone working through choices she didn’t completely understand, someone trying to figure things out, which again I think is pretty relatable.

Tell us about a few other currently out or upcoming novels — both graphic and traditional — that you loved.

Mariko: Oh gosh. Molly Ostertag’s Witch Boy, Thi Bui’s The Best We Could Do, A Quick and Easy Guide to Queer & Trans Identities by Mady G. and J.R. Zuckerberg, The Backstagers by James Tynion IV and Rian Sygh.  I also read a lot of murder mysteries and I really enjoyed My Sister the Serial Killer by Oyinkan Braithwaite.

Steve: I don’t really get the chance to read much for pleasure. I’m usually reading back issues to catch up with a character I need to draw, but I always try to keep an eye on anything John Allison is writing or illustrating.

Mark Russel never fails, and I loved Wired Up Wrong by Rachael Smith. I buy a lot of ’60s and ’70s brit sci-fi comics for the art too. 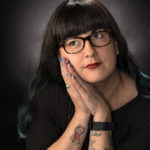 Mariko Tamaki is an award-winning Canadian writer living in Oakland, California. She is the author of Saving Montgomery Sole and the co-creator, with Jillian Tamaki, of This One Summer, which received the prestigious Eisner and Ignatz awards as well as Caldecott and Printz honors. Her growing slate of critically acclaimed comics and graphic novels includes Teenage Mutant Ninja Turtles, Tomb Raider, Adventure Time, She-Hulk, Lumberjanes, Supergirl: Being Super and New Super-Man. 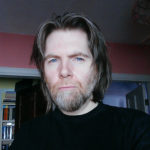 Steve Pugh is a British writer and artist, born and based in Midlands of England. Recruited for DC’s Vertigo imprint at its inception, he worked on both Hellblazer and Animal Man, and then the Preacher spin-off Saint of Killers. He co-created, wrote and drew Hotwire for Radical. He has illustrated dozens of series for Dark Horse, DC and Marvel, as well as drown the critically acclaimed, Eisner-nominated reinvention of The Flintstones.

Previous Post: « How Stories About Disability Help Create Empathy
Next Post: 5 Reasons Why You Should Read a Diverse Book for Your Next Community Read »
We're thrilled to reveal the cover for TOKYO NIGHT