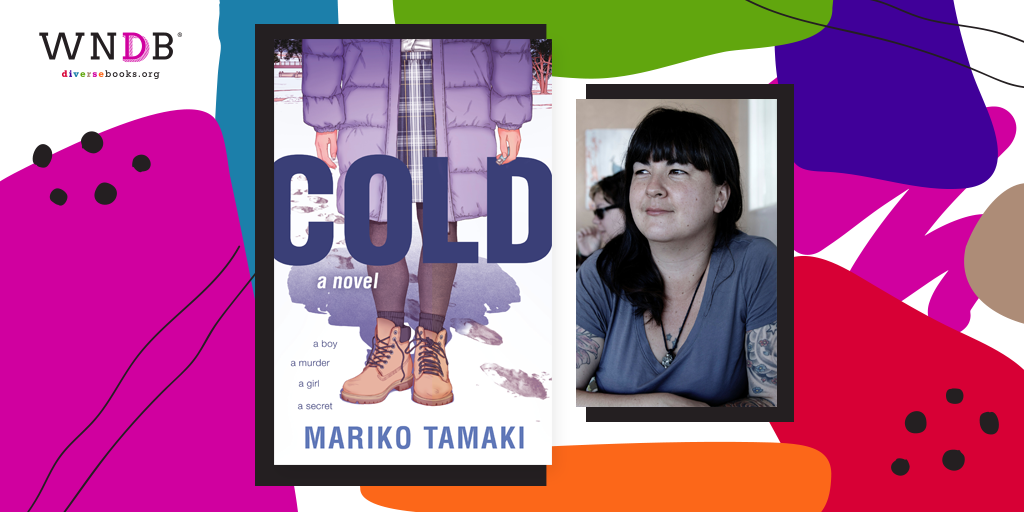 Today we’re pleased to welcome Mariko Tamaki to the WNDB blog to discuss her book Cold, which came out February 8, 2022!

This is the story of a boy who died—and a girl who wants to know why.

Todd Mayer is dead. Now he’s some sort of ghost, hovering over his body, which has just been found in the town park, naked and frozen in the snow. As detectives investigate Todd’s homicide, talking to the very people who are responsible for how he died, Todd replays the events that lead him to his end in the park.

In the vein of The Lovely Bones, this dual narrative is told through the voices of Todd in his afterlife and Georgia as she uncovers the truth behind his death, resulting in an immersive, emotional, and provocative read. 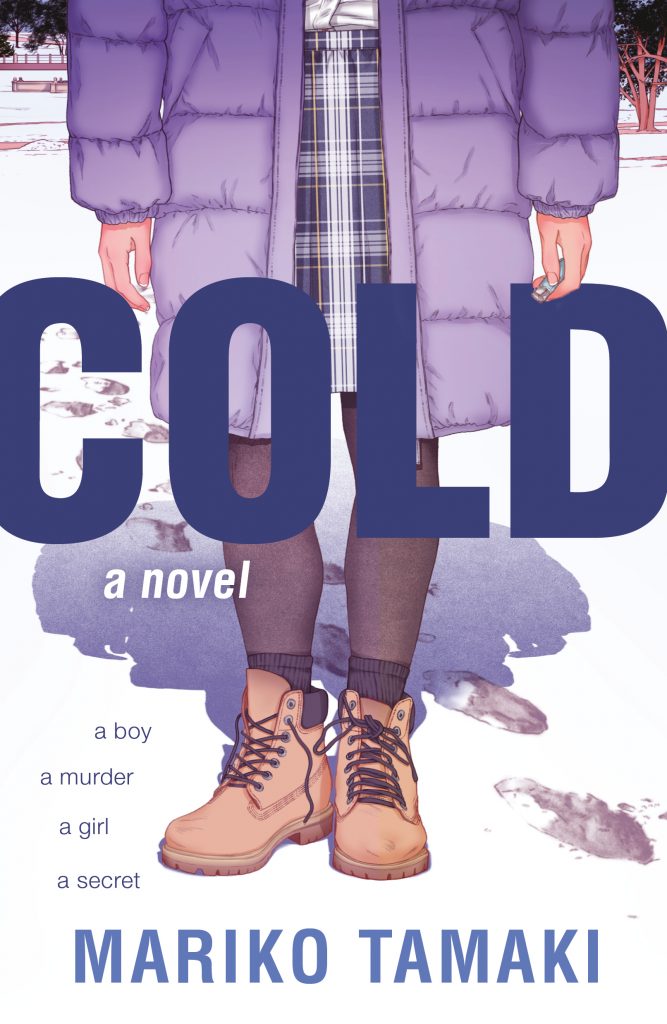 How did you get the idea or inspiration for Cold?

I have always loved murder mystery novels, and I thought it would be an interesting genre to write in YA, I guess mostly because mysteries are so much about reading people, and that’s a skill I associate with being a teen? My other inspiration was William Golding’s Lord of the Flies, specifically the character of Piggy, which I had been trying to work into a modern story for ages. I feel like Piggy was my original outsider character in literature.

What was your favorite part about writing Cold? What was the most challenging part?

My favorite part is always writing exchanges between characters. I love writing people talking to each other, especially if one person, at least, thinks they are funny. The most challenging part was putting together the timeline for a mystery. I had to use a wall and cue cards to do it. It took FOREVER.

I tried a few versions with various singular points of view. I really wanted the book to be about the experience of being a teenager as much as it was about a murder. I think opening the story to two different teens who make different choices made that more of a possibility.

Do you have a writing playlist or listen to anything while writing? What are a few songs that embody Cold?

OH! Yes I DO have a playlist. One moment. OK.

I listen to A LOT of movie soundtracks and I find really anything that Reznor & Atticus have done or the Man on Wire soundtrack to be very atmospheric and therefore helpful. 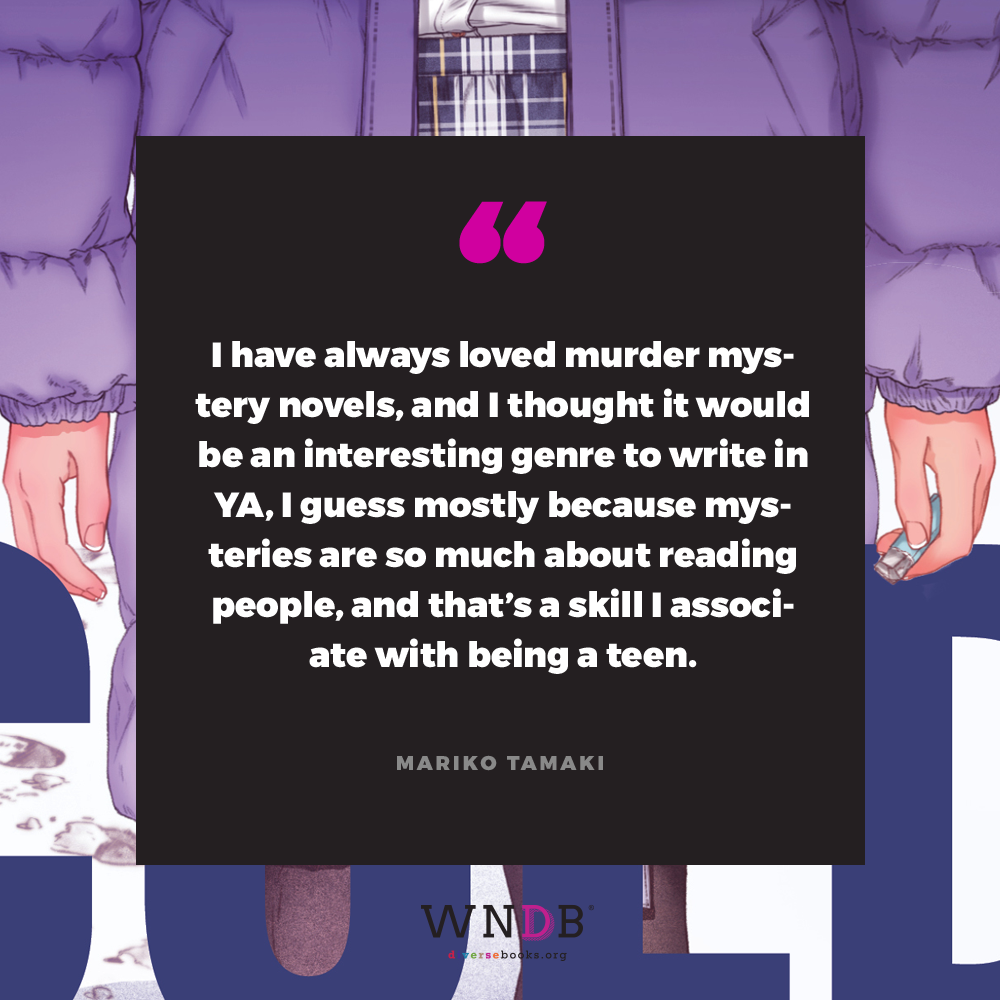 You are also the 2020 recipient of the Walter Dean Myers Award, Teen Category, for Laura Dean Keeps Breaking Up with Me. How has your work evolved or changed since then?

My goal is always to do something slightly more complicated with every new project I take on. I think with every book I’m also trying to dig a little deeper into the why as opposed to just the what. I don’t know if I would say I’m succeeding but I’m definitely working on it.

How does your process and approach to writing a novel compare with your process when collaborating on a graphic novel?

Graphic novels are so different because you’re telling a story with someone else. The nature of the writing part of a graphic novel also means they’re much faster to write on my end (but extremely labor intensive on the side of the illustrator). I feel like novels are a lot of heavy lifting, and it’s an endeavor to make them feel easy, to find the flowing bits in the mountains of words.

How has it been since the launch of Surely Books? Is it difficult to balance your own work with overseeing and curating Surely Books?

Being a freelance artist is so much about balance. My partner got me into bullet journaling and that has been a huge help. But I love working with artists and writers and really the whole team at Abrams on the Surely books. It’s time well spent! It is so incredibly rewarding seeing someone’s vision become a book. And they are AMAZING books. Our first release was Terry Blas and Claudia Aguirre’s Lifetime Passes. Which is such a sweet and sharp story. I hope everyone goes and checks it out.

What is a question you wish you were asked more often (and the answer)?

In terms of nerding out, I’d love for more people to want to TALK about fountain pens, so I could pontificate on my current Kaweco and Twisbi obsession. And how much I love grey ink. For no particular reason.

I feel like there should be some place for saying how much of writing is this lonely thing of just you and your blank page or laptop screen, and how much of it needs to be connecting with other things and people and having a variety of people you can talk to about what you do. And if one of those people is a therapist, awesome.

Mariko Tamaki is a Canadian writer of comics and prose. She writes comic books for BOOM! Studios, Marvel and DC Comics. She is the co-creator of the New York Times bestseller, This One Summer with Jillian Tamaki, which received Eisner and Governor General awards, as well as Caldecott and Printz Honors, and the Printz Honor winner, Laura Dean Keeps Breaking Up with Me with Rosemary Valero-O’Connell. Mariko lives in Oakland.