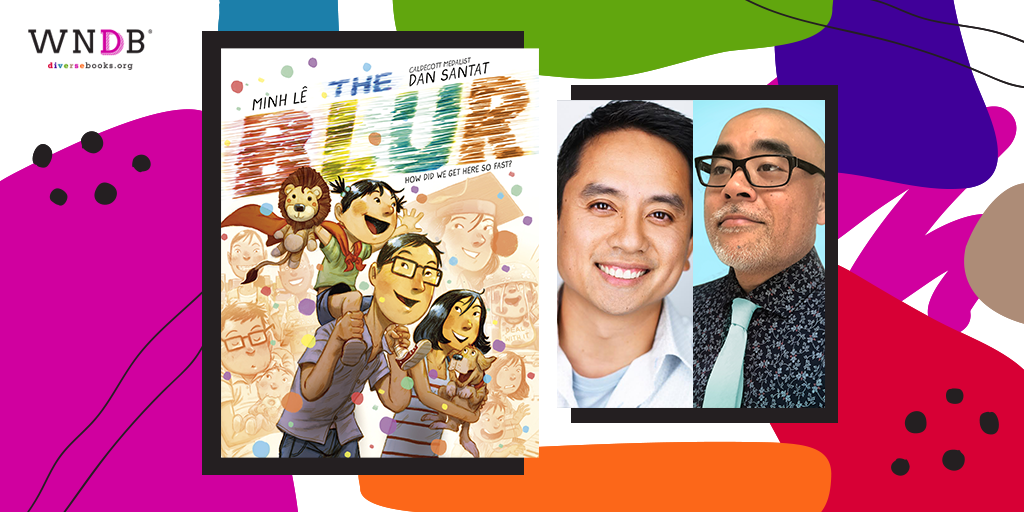 Today we’re pleased to welcome Minh Lê and Dan Santat to the WNDB blog to discuss their picture book The Blur, out May 3, 2022!

From the very beginning, there was something different about this child… An ultrasonic voice. Fantastically elastic limbs. Super-magnetic powers. But it wasn’t until the child took her first steps that she became: THE BLUR!

Nothing can stand in her way as she takes the world by storm: always on the move and darting into danger! All too soon, she is zipping through the days, and zooming over the years…

Framed as an origin story, here is a fun superhero romp for kids, filled with bold and bright illustrations, that will pull at the heartstrings of every parent. 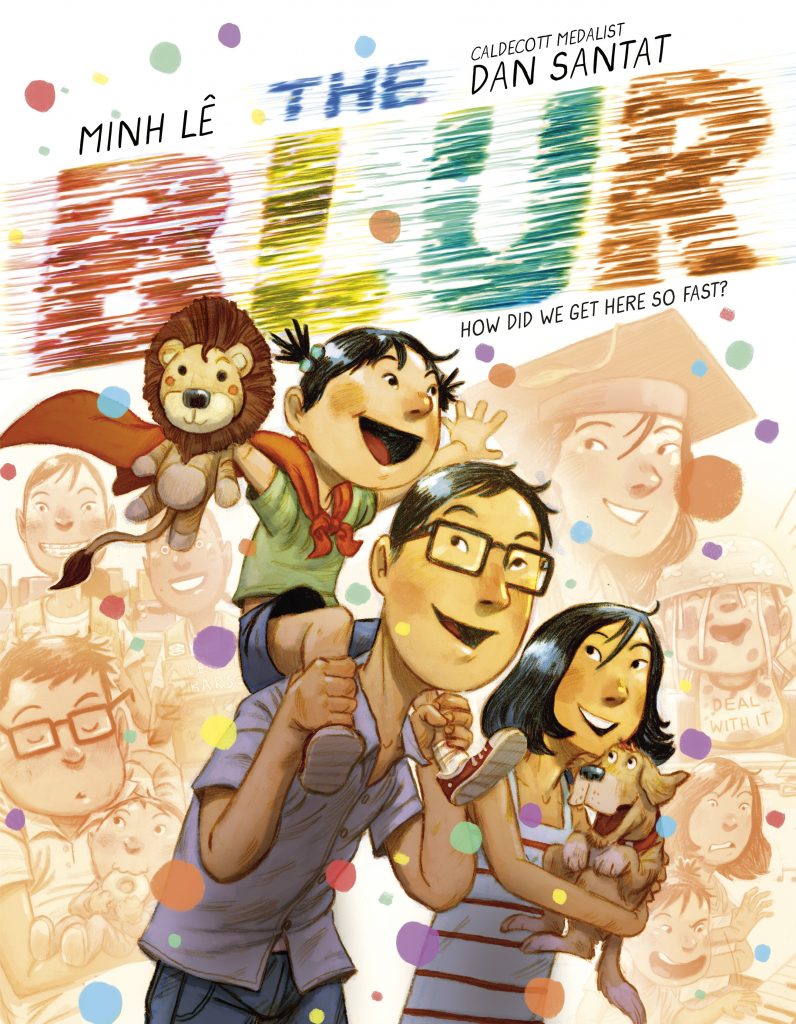 What inspired you to frame a typical child as a superhero?

Dan: It was all Minh’s idea from the start. He’s been brilliant in terms of coming up with great concepts for books, which I feel is the most important component of a picture book. As a parent, I think most of us feel like the first seven or eight years of our children’s lives are all about keeping up with this little ball of energy. You’re kept on your toes. It never occurred to me that you could perceive this type of vitality as extraordinary. The best part of working with Minh is that he has a fantastic, unique perspective on the world, and when I see his ideas written as a manuscript, these profound concepts seem so simple that I curse myself for failing to see them in the same way. The strength and brilliance of his writing is in its simplicity and intuitiveness.

Minh: For me, it started with thinking about what I would like to see Dan illustrate. The idea of seeing the whirlwind of childhood through Dan’s art made the perfect framework for a story. Plus, what kid doesn’t like to see themselves as a superhero now and then? The superhero angle also gave us a lot of room to layer different meanings onto the story. Young readers will hopefully feel a thrill seeing themselves as a superhero called the Blur zooming through the world, while adult readers might recognize the blur of those early, chaotic days of parenthood and the nostalgic feeling of time passing in a blur.

I believe that parenting a child is a process of growing up, not just for the child but for the parent, too. How do you feel fatherhood has helped you grow?

Minh: Fatherhood has definitely made me more mindful of how I spend my time—especially during the past few years of the pandemic, when time has felt more precious (and harder to grasp) than ever. It’s so easy to feel overwhelmed or distracted by the world, so working on The Blur was actually helpful on that front because while it’s about how quickly time passes, it was also a constant reminder to stop and savor these moments as they happened in real time.

Dan: When I started out in this business of writing for children, I relied on my memories of the experience of childhood. Once I had kids, I realized that my memories were way off. As adults, I think we tend to idealize the memories of our past selves and make them a little more polished, but the truth is that growing up can be a very complicated thing, especially once you have a parent’s perspective added to the mix. There’s a clarity to the inner workings of the whole family dynamic. When I see my kids, I see a contemporary version of my old self, and it gives me a much more accurate reminder of what it was like to be that particular age but without the antiquated parenting system. It’s honest. And now I write to my kids rather than to my younger self because it’s more accurate and also not dated. I don’t parent like my parents did, but that’s because having both perspectives gives you information about how you can improve as a parent. I’m a much more patient man. I have deep conversations with my kids, and as a result, we’re closer as a family, but most important, I can admit to my kids when I’ve made mistakes. I feel like I’m raising better mentally adjusted versions of myself, if that makes any sense.

The family featured in the story is clearly Asian, as are the two of you. Over the span of your careers, how has the publishing industry changed to ensure authentic representation of all children?

Minh: There are so many stories and characters out there now that weren’t available in libraries or bookstores when we were growing up. It means so much to children today to have a broader range of books to choose from. I think the industry has made significant strides in the breadth of representation, and while there’s still a long way to go, now I’m also excited to see efforts to increase the depth of representation by allowing creators to tell stories from the full spectrum of their experience—the serious and the silly, the profound and the mundane. It’s true that we all contain multitudes, and I think bookshelves are just scratching the surface in that regard.

Dan: I know a lot of people can complain that we’re all not doing enough, but I feel there is a lot that’s being done right. I can also empathize with folks who demand more from the community and want it done quickly, but I think we also have to understand that society simply doesn’t work that way. What I’ve seen in the last six years has been a massive shift in representation in terms of diversity and inclusion, and many of those books have won numerous awards and have made it onto bestseller lists. That’s how you move forward. That’s how you set a new standard and create a new normal. Sure, there are some who try to pull us two steps back when we take one step forward, but the world is always marching in the direction of change. If there’s anything I’ve noticed in my life, it’s that if you don’t adapt to the world, the world will leave you behind. 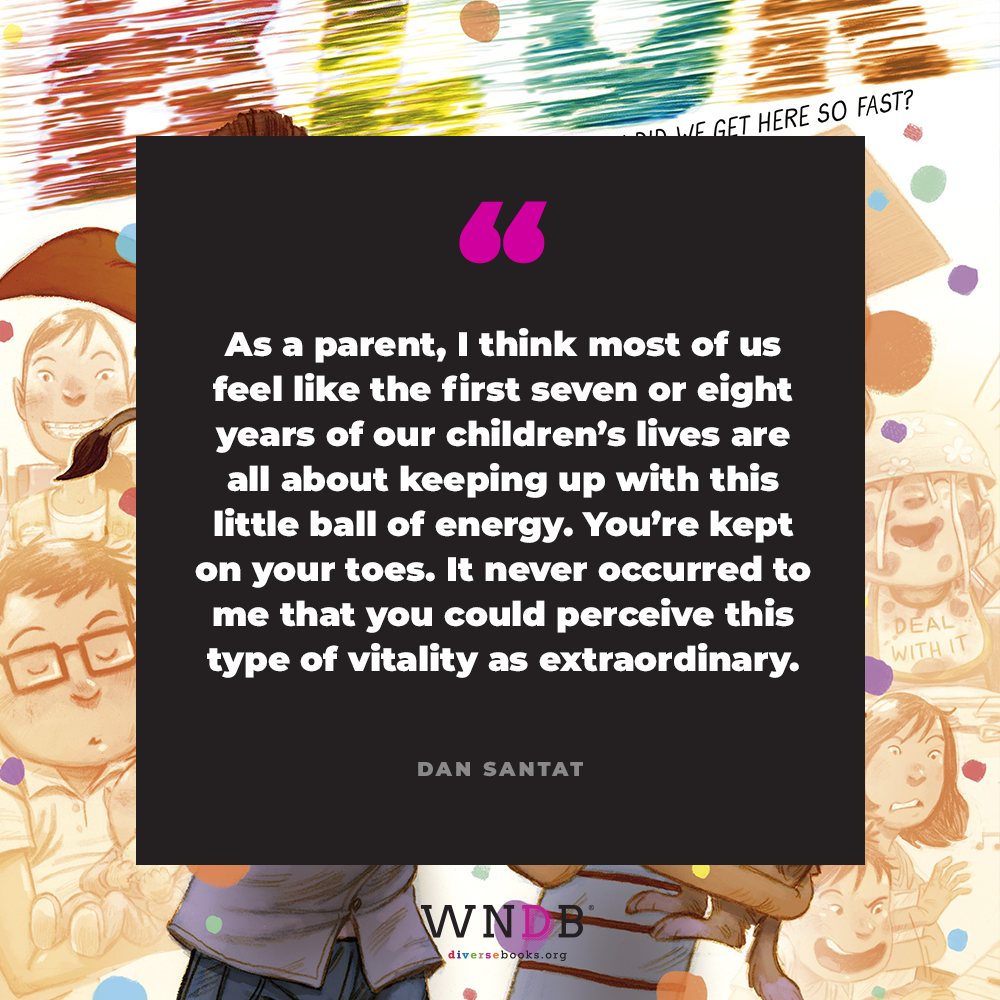 The Blur is the third book you’ve worked on together. What are the advantages of establishing such a partnership?

Minh: I feel like we’ve established a nice rhythm in our collaboration. With any picture book, the hope is that the text and illustration work together seamlessly when it all comes together. I like to leave as much room in the manuscript as possible for Dan to work, and he is always able to breathe so much energy and heart into these stories. And with the guidance of Rotem Moscovich, who has been our editor on all three books, I think we’ve been able to weave text and illustration together in a way that really elevates all our contributions.

Dan: I think I benefit greatly from the fact that Minh has this amazing ability to write like an illustrator. He knows how to create a perfect balance between show and tell in a picture book. He knows where his words make a great impact, and he knows when illustrations would make a much stronger impact, and he reflects that in his text. Now, after a few years of working together, he feels like a third arm or a second brain, and I can sense what he’s going to do. You can’t ask for a better partnership than one that feels absolutely intuitive.

What recently published picture books have you enjoyed?

Minh: Two new books that I absolutely love are Nigel and the Moon by Antwan Eady with illustrations by Gracey Zhang and Let’s Do Everything and Nothing by Julia Kuo. Another book that I totally wish I had written is The Boy and the Sea by Camille Andros, illustrated by Amy June Bates.

Dan: I’ve been enjoying the work of Matthew Forsythe. I was a fan of Pokko and the Drum, and I think his newest book, Mina, is stunning. Jason Chin is another artist who has stepped his game up. I was blown away by all the details in Grand Canyon, and he delivered lots of emotion in Watercress by Andrea Wang. I’m looking forward to his newest book, The Universe in You: A Microscopic Journey. Another person I think folks should keep an eye on is my old friend Catia Chien. She’s been making beautiful picture books for years. She made waves with The Bear and the Moon by Matthew Burgess, and The Longest Letsgoboy by Derick Wilder is fantastic.

As award winners, what special secrets to producing an award-worthy picture book can you share with the rest of us?

Minh: For picture book authors, I always tell people to leave as much room for collaboration as possible. The more space you leave, the more you let your manuscript breathe, the more opportunity there is for magic in the collaboration process. This does require an element of trust, which is why my second piece of advice is: whenever possible, work with awesome, award-winning illustrators.

Dan: Artists can craft beautiful books, but when you craft a book that triggers an emotion, you take the work to a whole new level. That’s what I’m constantly seeking in my work—something that makes the reader feel something. It can be humor, or sadness, or anything. It just has to be something. I think that’s what makes a good book a great book. 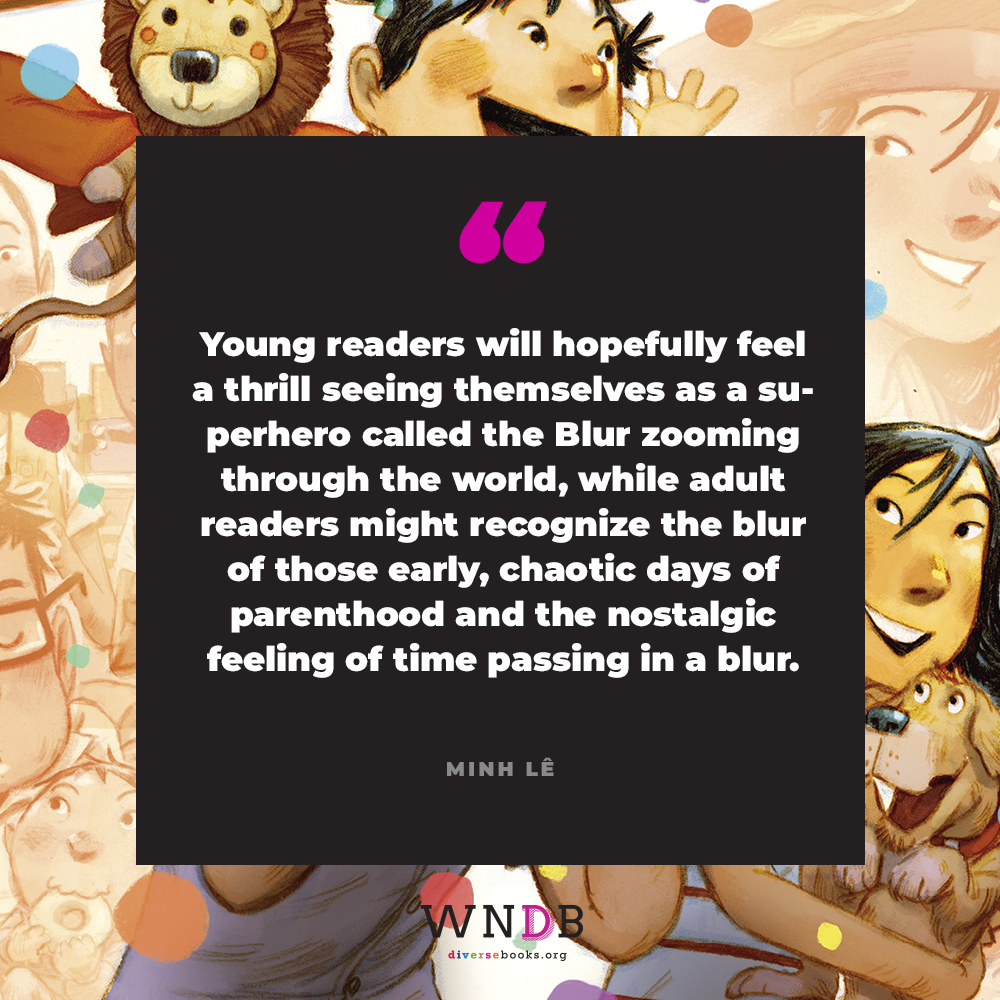 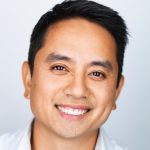 Minh Lê is the author of several children’s books, including two others illustrated by Dan Santat, Drawn Together, which won the 2019 Asian/Pacific American Award for Literature, and Lift which received five starred reviews. His other books include Let Me Finish! illustrated by Isabel Roxas, and The Perfect Seat, illustrated by Gus Gordon. Minh has written for the New York Times, the Horn Book, and the Huffington Post. He currently lives in San Diego, California with his wife and kids. 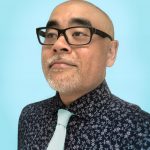 Dan Santat is a #1 New York Times-bestselling author and illustrator of over a hundred books. His picture book The Adventures of Beekle: The Unimaginary Friend received the Caldecott Medal. He also illustrated Lift and Drawn Together, both written by Minh Lê, which received critical acclaim. Dan is also the creator of the Disney animated hit The Replacements. He lives in Southern California with his family. 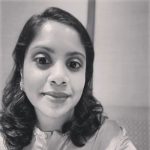 Previous Post: « Q&A With Casey McQuiston, I Kissed Shara Wheeler
Next Post: Q&A With Maya MacGregor, The Many Half-Lived Lives of Sam Sylvester »
Applications are open for Literary Agents of Chang