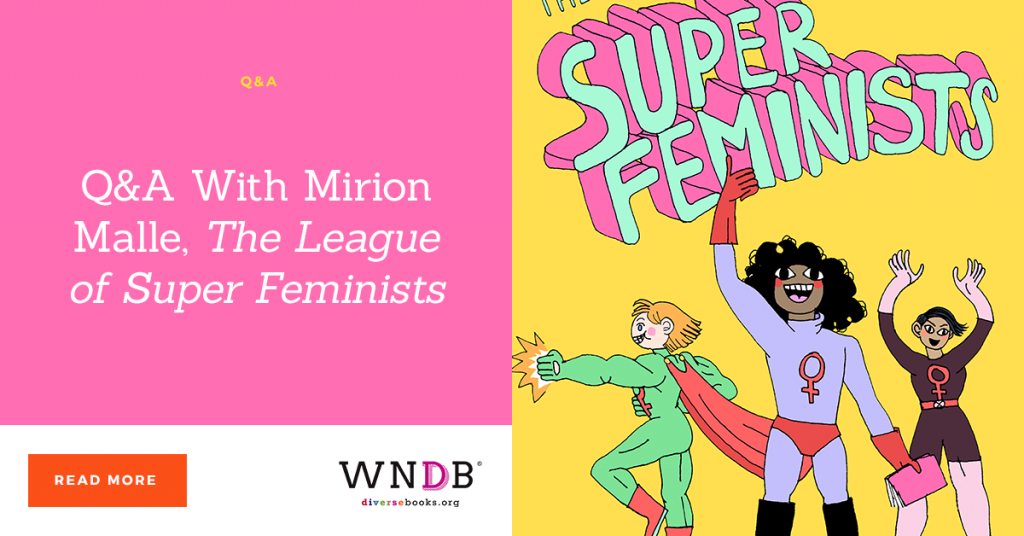 Today we’re pleased to welcome Mirion Malle to the WNDB blog to discuss her graphic novel The League of Super Feminists, translated by Aleshia Jensen, out October 13, 2020! 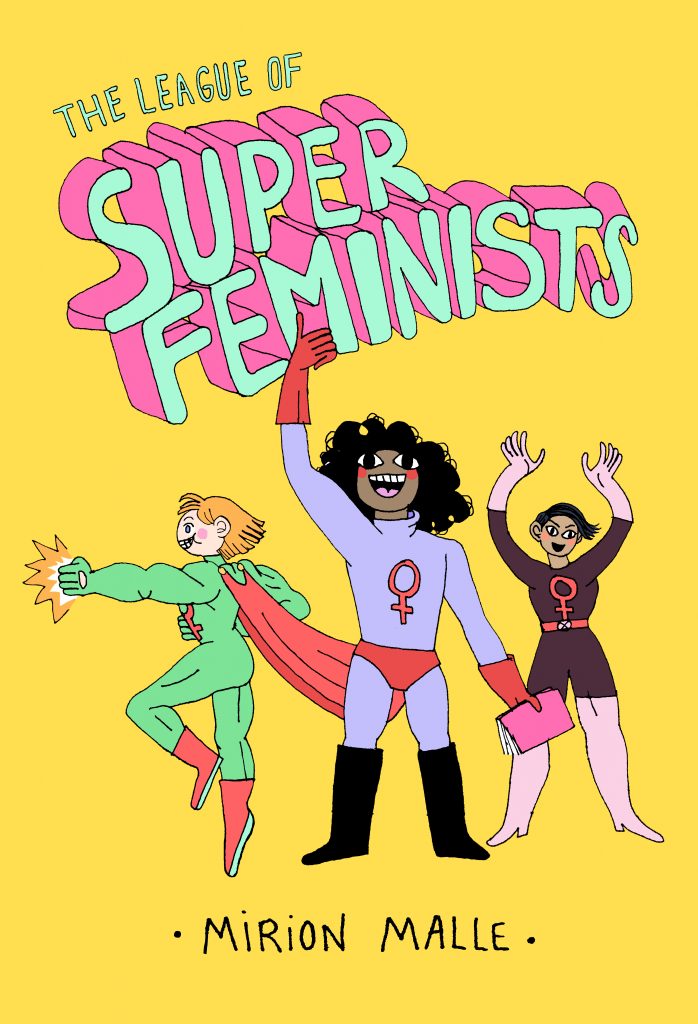 The League of Super Feminists is an energetic and fierce comic for tweens and younger teens. Cartoonist Mirion Malle guides readers through some of the central tenets of feminism and media literacy including consent, intersectionality, privilege, body image, inclusivity and more; all demystified in the form of a witty, down-to-earth dialogue that encourages questioning the stories we’re told about identity. Malle’s insightful and humorous comics transport lofty concepts from the ivory tower to the eternally safer space of open discussion. Making reference to the Bechdel test in film and Peggy McIntosh’s dissection of white privilege through the metaphor of the “invisible knapsack,” The League of Super Feminists is an asset to the classroom, library, and household alike.

Knights and princesses present problems associated with consent; superheroes reveal problematic stereotypes associated with gender; and grumpy onlookers show just how insidious cat-calling culture can be. No matter how women dress, Malle explains, there seems to always be someone ready to call it out. The League of Super Feminists articulates with both poise and clarity how unconscious biases and problematic thought processes can have tragic results.

Why does feminism matter? Are feminists man-haters? How do race and feminism intersect? Malle answers these questions for young readers, in a comic that is as playful and hilarious as it is necessary.

You have a background in gender and feminist studies. How did you weave your expertise and lived experience into this book? Did your educational background affect the shape of this book?

Oh yes, totally! When I was 21, I started doing comics about feminist topics on my blog (mainly regarding questions of representation in media), and it led to my first book, published in 2016. At this time, my feminist knowledge was mainly from books, activists on Twitter, and, of course, my own experiences. After writing those comics and the book, I began to engage heavily in the online feminist/activist community. It was then that I decided to do a master’s degree in sociology and feminist studies.

At university, I became increasingly frustrated with the often out-of-touch and elitist framework in which crucial feminist thought was held. I noticed that invaluable feminist reflections were too often relegated to the sphere of institutional study, making them largely inaccessible to the mainstream public. So, when my publisher in France asked me to do a feminist book for kids, I was very motivated to make these ideas more accessible to a younger readership. I’m actually not convinced that these concepts are that complicated in their own right. I actually think that they are very easy to explain and understand!

That was my main goal for this book: To use my academic knowledge and articulate it in such a way that kids could understand because I think they are clever and very capable of understanding complex concepts once informed. I really think that it’s super important for everyone interested in feminism, or well, for everyone in general, to read theoretical essays about those questions because we need that knowledge to understand how things work, but most of the time, the academic language is unnecessarily complicated.

How did you decide which aspects of feminism, including feminist history, to include in this book? Were there any things you originally hoped to include that you had to leave out of the final book?

With my french publisher, Marianne, we brainstormed to find the most basic questions that kids have about feminism to build the book around six different sections. I have experience doing talks at schools with kids and teenagers, where we dive into the relationship between comics and feminism. I was able to use these experiences in the book, incorporating the many questions the kids asked.

The topics in the book are vast: love, friendship, media, beauty standards, etc. From these notes, my publishers and I built the plan, and after that my main goal was to write it all in a very clear way, so as not to lose the attention of the young readers.

How did you use your art to illustrate the concepts introduced in your book? Which came first, the art or the text?

When I’m doing educational comics, I work like I’m making a plan for a dissertation. I have always worked like that, even on my blog. I do a dissertation draft for each chapter, with a plan, in which I build my explanation and outlay my arguments.

After that, I read this plan and try to cut it in pages (like, this first part will be on two pages, the second part in one, etc.), and then I begin to draw. I don’t do a storyboard, I just think about it while I’m drawing the page. I suppose it’s because I’ve been doing it for so long, but transposing a written plan into a comic has become very natural to me. While I do this, I’m constantly reflecting on the piece as a whole, as well as focusing on the particular drawing at hand.

What was the process like of having this book translated into English?

When I was an art student, we had a class called “histoire de la bande dessinée” (“comics history”), and we learned about the main North American publishing houses. That’s where I first discovered D+Q. When I first came to Montreal in 2014, I immediately went to their store and bought lots of books, and it was kind of a goal of mine to be published there.

So, first of all, it was very exciting! And the best part was working with the translator, Alesha Jensen, because she is so good and wanted me to be totally happy with the translation. We even made the inclusive language page together, since the rules in French differ dramatically to those in English. She was so helpful. It was such a great experience to work with her. I’m also super happy with the design of the book, the yellow of the cover is not quite the same as the french version and I like it very much.

If you could write a companion to this graphic novel, what would it be about and why?

I don’t really know if I would want to write another book like this one. I actually just released my first fiction graphic novel at the beginning of the year, and writing fiction has always been my dream. I mainly wrote educational comics in my career by accident, because that’s what I drew on my blog and it caught some attention.

So now I think I want to focus on fiction for the time being, but perhaps I’ll circle back to educational comics in the future. Maybe more for adults though, like I’d want to do a feminist studies book on the concept of vulgarization, similarly to the way I did in this book. But I loved doing a kids’ book. It was incredibly fun, and I’ve thoroughly enjoyed meeting the kids at conventions and book signings! They are so joyful, brave, and fascinating.

I’m actually in the process of writing another kids’ book, but this time it’s fiction. I definitely think fiction can be political, so this next book will be an excellent companion to this one, I hope.

Are there any writers or artists who have been an inspiration for your work?

I feel like a lot of artists and writers have shaped me, even if it’s not the most obvious in my art.

I don’t know if it’s a conversation, but if you want to read other graphic novels about the same subjects, Liv Strömquist’s books are definitely the way to go. For a younger public, the unmissable Brazen, by Pénélope Bagieu, is a new classic.

My recommendations are not kid-friendly, though. I think the graphic novel that was the most important to my understanding of graphic narration, and how to use it, was Daddy’s Girl by Debbie Drechsler. I truly understood how the form serves the content while reading it, and also the emotional impact a graphic novel can have.

The work of Julie Delporte was—and still is—extremely important to me and my own work. It had such an impact on me. It was her who really taught me how to be a storyteller. And another amazing book is Lonely Boys by Sophie Bédard, which is going to be published in English soon at Pow Pow Press. Sophie really knows how to write lively, funny, and touching characters, I’m truly a fan! 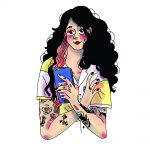 Mirion Malle is a French cartoonist and illustrator who lives in Montreal. She studied comics at the École Superieure des Arts Saint-Luc in Brussels before pursuing a Masters degree in sociology specializing in gender and feminist studies, via Paris Diderot and the Université du Québec à Montréal. Malle has published three books. The League of Super Feminists is her first book to be translated into English and was nominated for the 2020 Prix Jeunesse at the Angoulême International Comics Festival.

Aleshia Jensen is a French-to-English translator and former bookseller who lives in Montreal. Her translations include the novels Explosions by Mathieu Poulin and Prague by Maude Veilleux, as well as comics by Julie Delporte, Max de Radiguès, Catherine Ocelot and Axelle Lenoir.