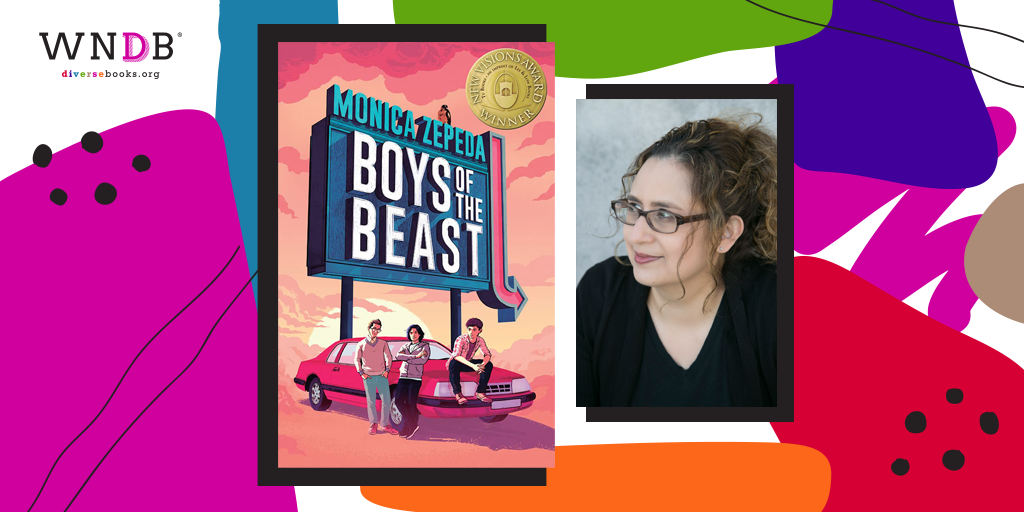 Today we’re pleased to welcome Monica Zepeda to the WNDB blog to discuss young adult novel Boys of the Beast, out April 12, 2022!

THE BOYS. Three strangers who also happen to be cousins:

Matt. Evangelical Christian. Earnest. Film nerd. Carrying a dream to make movies–despite the future his father has planned for him.

Ethan. Jewish. Gay. Sci-fi nerd. Carrying a phone that contains his entire relationship with Levi–unless they finally get to meet IRL on this trip.

Oscar. Stoner. Smartass. Too cool to be a nerd. Carrying a letter that haunts him–no matter how hard he tries to escape it.

This powerful voyage in three voices marks the brilliant debut of Monica Zepeda. 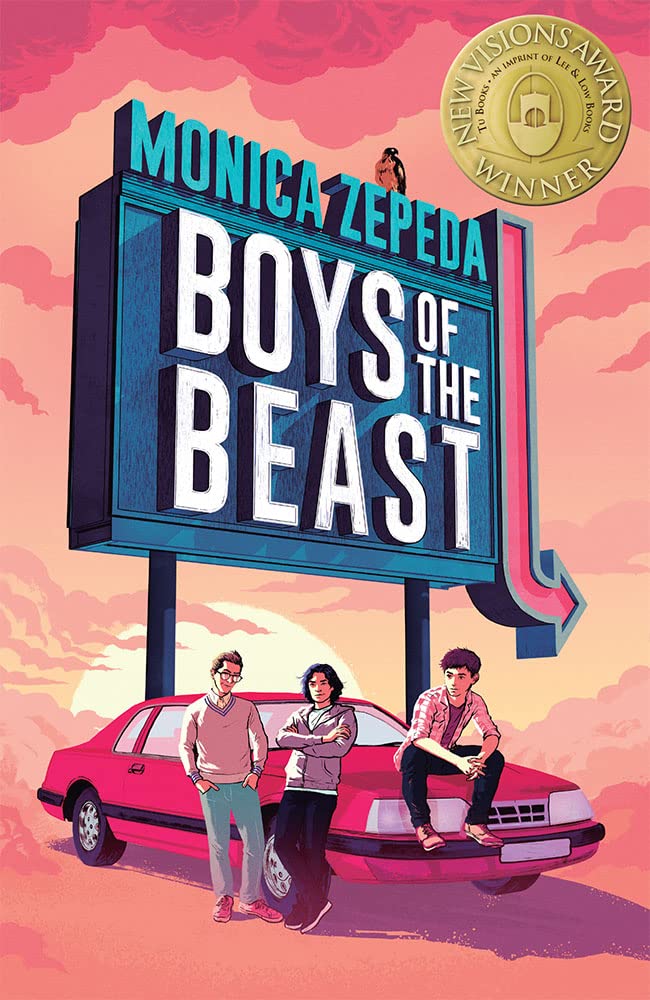 I knew it was going to be very character-driven and very talky. So I was looking for a situation that would give them an opportunity to have these conversations so it progressed. When they start out on the road trip, they’re talking about very superficial stuff, like what kind of music do you like, what kind of college do you hope to go to, and as they spend more time together, the conversations get deeper and deeper.

Did you always set out to write from three different points of view?

I did, because I wanted to focus on each boy separately so I knew it was going to be a first person point of view for each of them. It became very important to me that each boy had his own voice and that voice be strong so that the readers knew who was talking at any particular time. That’s why I also brought in texting, the screenplay format, and the letter, to make each boy individual.

What was the most challenging part about writing from three different but also very distinct points of view?

Making sure that their voices were unique. So after the first couple of drafts, I really tried to fine-tune it on specific word choices and how each boy spoke. So it was like Ethan who uses the word “super” a lot. It’s just little things like that to fine-tune their language. During one of the drafts I separated the book into each separate boy. I read it all the way through just in one voice so I could make sure that voice was consistent.

This book has a lot of different themes in it, did you always know that you wanted to write in those themes or did some of them sneak up on you?

I knew I wanted to talk about certain big themes just because there were things that I felt strongly about or that I’d experienced, things like school shootings because my brother is a teacher and it’s heartbreaking every time it happens and nothing ever seems to change. I knew I wanted to talk about Evangelical Christians because I grew up in that kind of environment and being able to at some point find your own way away from your parents but still having your own walk. And then I knew I wanted a love story for Ethan. I really just wanted a really positive love story. Those are the initial things that drove me to write it.

Along the way, we had COVID and just before lockdown my dad died. So the issue of mental health and grief became more prominent. I think it took a much bigger place than I initially intended to because I did want to cover it a little bit, especially because in the Evangelical world it’s taboo basically. It’s like if you’re seeking help outside of the church then something’s wrong with your faith, which is not good. It’s not healthy. So those issues became much bigger than I had initially envisioned. 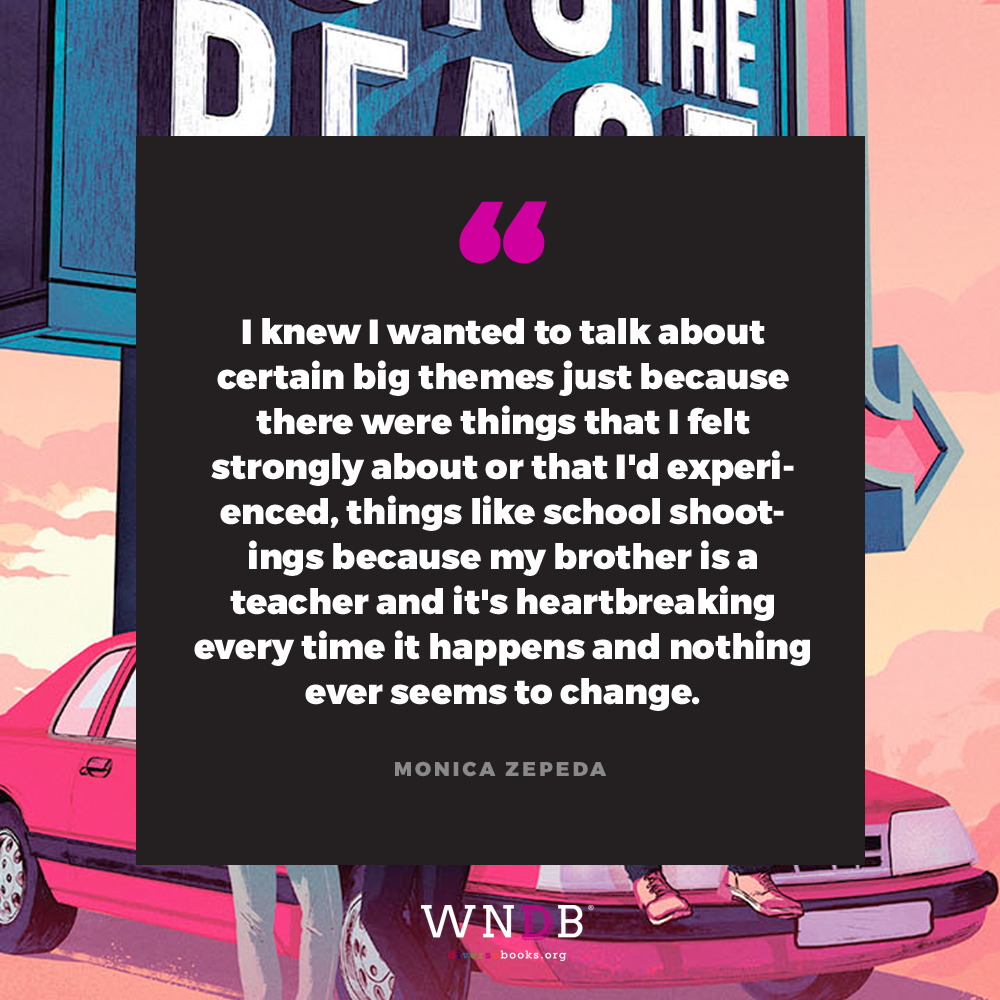 If you were to go on a road trip with your cousins where would you go? Why?

I thought about that one a lot. I mean, I have a lot of cousins. When I was growing up we were always over each other’s houses. We had Thanksgivings and then there were weddings. But as we’ve gotten older it’s like we just see each other at funerals, which is really sad. My dad’s funeral just before lockdown was the last time we saw each other. So I’m like, “Well, what would he do? Where would we go?” and I think Vegas. I think we would go on a big family reunion and see all the distant cousins to reconnect.

Who do you write for?

I write for me because if I’m going to put that much not just time but emotional energy into something I’m going to do it because it’s something that I need to get out. Anyone else who likes it, who appreciates it is a bonus.

What do you hope readers take away from Boys of the Beast?

I thought a lot about this one too. I think, ultimately, hope. I hope they take away this feeling that whatever they may be going through that they’re not alone, there are people in the world who want to help them, who want to see them thrive. Maybe they just haven’t met them yet but they’re there and it’s okay to ask for help and it’s okay to offer help. Most of all I just hope readers come away with a sense of hope and openness. Someone else had asked me what the overall theme of it was, and I think ultimately it comes down to being able to make yourself vulnerable to other people and the hope that you’ll be able to connect with the people who are going to be a good support system for you. 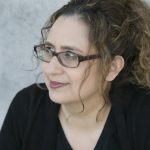 Monica Zepeda is a third generation Mexican American from Southern California who lives by the beach with her husband and their unbelievably cute cats. She earned an MFA in playwriting before working in the entertainment industry. The award-winning independent film she wrote, Collusions, is available on most video on demand platforms. Her jobs have included a bookseller in London, a researcher of miracles, and she is now a Teen Services librarian. She won Lee & Low’s New Visions Award for her debut YA novel, Boys of the Beast, the story of three strangers who also happen to be cousins and their road trip in their Grandma Lupe’s classic Thunderbird. In addition to writing, Monica collects cupcake recipes and loves to travel.

Previous Post: « Emily X. R. Pan’s An Arrow to the Moon Is A Thoroughly Asian American Story
Next Post: Q&A With Linda Williams Jackson, The Lucky Ones »
Applications are open for Literary Agents of Chang