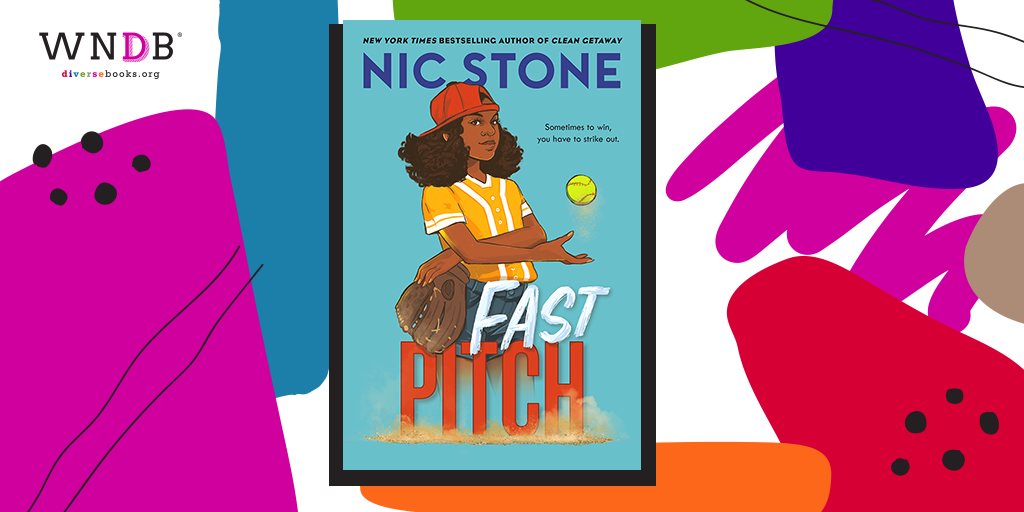 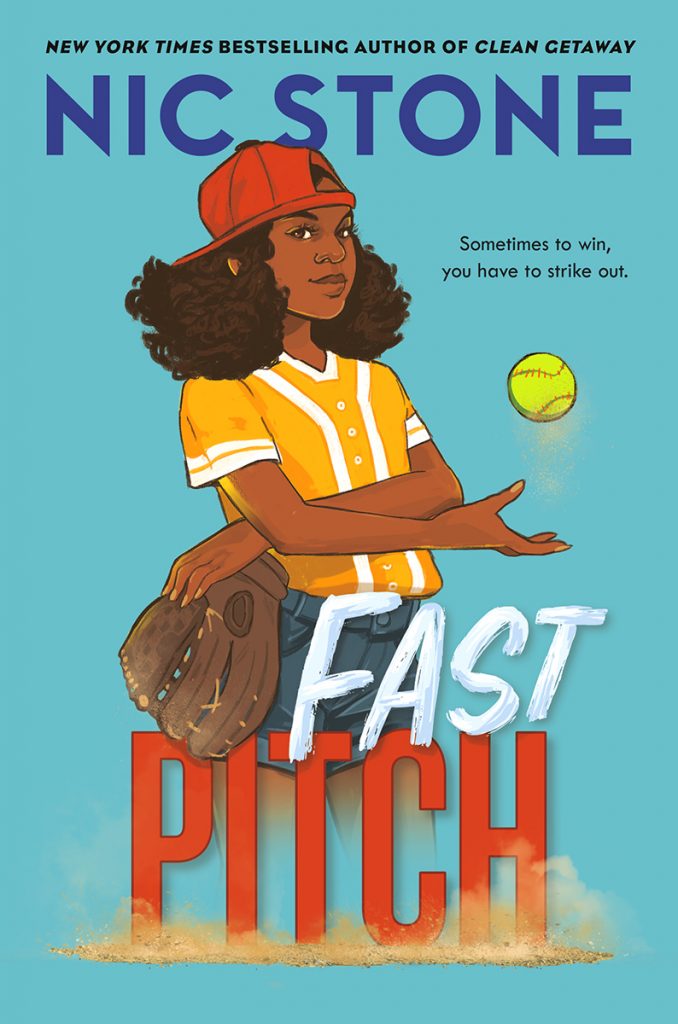 I read that Fast Pitch is a retelling of The Sandlot featuring a team of young Black girls that you drafted in 2020. How did you come up with this idea and what was it like writing the book during a global pandemic?

I’ll be completely honest with you: I have no idea where the idea came from. When I was a kid, and even now, The Sandlot was my favorite movie. My brother and I would spend summers at my grandmother’s house in Kansas and we’d watch The Sandlot at least once a day—at least! I can pretty much recite the whole thing.

I don’t actually remember writing this book. 2020 was such a sugar-honey-iced-tea show (acronyms!) and I have memories here and there of writing it, but I don’t remember much. Even the editing process, I was still kind of foggy-brained, but people seem to love it which says a lot about art creating itself.

As a former athlete myself and not seeing very many books about Black girls in sports, it’s something I wanted to address. The only one I could think of was Patina by Jason Reynolds, and it’s about a girl who runs track. I wanted to plug something else into that void. Softball is a sport I played and it’s a sport people don’t typically associate with Black girls. If you’re going to write about “batball,” as Shenice’s younger brother calls it, you can’t not reference The Sandlot.

You were also a young athlete! Did you play anything other than softball? Did you weave any personal experiences into this story?

I played basketball in middle school and switched over to competitive cheerleading in high school. That was fun! Most of Fast Pitch came from my imagination. It’s a blend of what I know about softball and a blend of personal experiences, specifically microaggressions. This is a book that falls right in line with my other books, which deal with race and racism in the twenty-first century.

Britt-Marie is a real person based on one of my best friends, Britney Marie. Coach Nat and Mrs. Erica are a real couple who live in Nashville. Natalie (Coach Nat) was on a softball team that won the Little League Softball World Series when she was younger. Erica is her wife and I love them as people. They were the perfect fit for the coach and the coach’s wife. Mr. Bonner is a real person—he works at the Ron Clark Academy here in Atlanta and is a good friend.

In addition to being a story about softball, there’s a mystery that impacts Shenice and her family which centers on Black folks being accused of or prosecuted for crimes they didn’t commit. What prompted you to incorporate this into Fast Pitch?

I knew I wanted Fast Pitch to have a The Sandlot vibe of a lost object that needed to be found. In The Sandlot, Smalls loses his father’s baseball signed by Babe Ruth and they spend the movie trying to get it back. With Fast Pitch, I leaned into the idea of the mystery and there being something Shenice needs to find but doesn’t know how, or if it even exists. What came out was the idea that there was an ancestor of Shenice’s that played “batball” and didn’t get to live out their dream. It’s her great grandfather and he’s alive at a very specific time in America— there’s really only one reason he wouldn’t have been able to live his dream. It let me lean into her figuring out how the world around her has changed, and how it hasn’t.

The illustration on the cover is based on a photo of yourself found on the back cover and you’ve talked about how others should put themselves in a space if they don’t already see themselves there. We’re starting to see more diverse character covers, but what was it like putting yourself out there for this cover?

Interestingly enough, the cover came first and I modeled myself after it! This artist managed to channel me so effectively that when I took this picture of me cosplaying the cover, people are assuming that the cover came from me, but it didn’t! She just nailed it. I will say that when I first saw the cover comp I burst into tears because she does look like me and has a little bit of swagger, tossing her baseball in the air. She’s beautiful and brown and she’s got this big hair. It was like a revelation. Seeing a book that has a person on the cover that I looked at and said “that’s me!” —I’m 36 and I’ve never had that experience before, ever. What I like to tell young people is, it’s there because I wrote the story. When you see someone who looks like you doing amazing things in a book or in a film, you recognize the things you’re capable of doing, but not seeing that reinforces these ideas that you’re limited in some way. It took a lot of unpacking of internalized inferiority, racism, sexism, but once I did it, it was like wait—I’m actually kind of amazing. People like me are amazing and there are amazing things we can do and accomplish. I want to provide that experience for other kids. I want them to read the book and feel empowered. Getting to create things that enrich that…there is nothing like it at all.

How has your work as a teen mentor impacted your writing?

There’s something to be said about learning history in a very personal way. Sometimes history doesn’t make sense to kids unless they can connect it to something personal. It helps them understand things weren’t the way they are now and it was even more unfair then. It lights a fire under them and helps them figure out what they’re going to do with it when you realize people before you have faced even more injustices. Spurring young people into action is one of my life’s purposes. 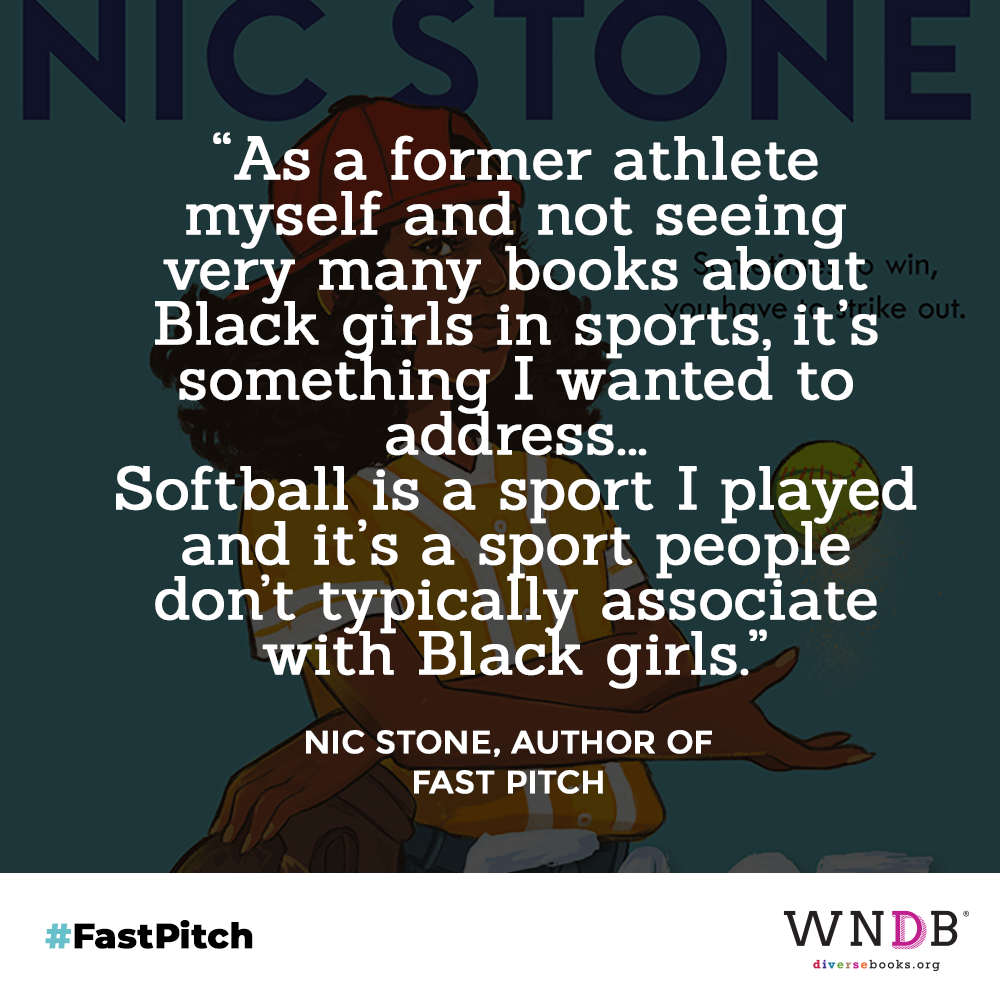 You’ve shared that as part of your writing process you dedicate a composition notebook to each project for plotting, outlines, and other ideas.

They’re everywhere! I have one for a project I’m just starting to work on. Every project has one—there’s not a single book I’ve not done this way. I sometimes handwrite jacket copy, the summary inside the front flap of a hardcover, or the back cover of a paperback, because it helps me create and stick to a roadmap. Sometimes there are different pieces of the story that go into the notebook because I can grab it and jot it down instead of pulling out my laptop. It also gives me this space where things are already compiled so I can build an outline. I’m consistent with my process!

Since your projects starts off in an analog way, what’s it like to finally hold the finished product in your hands? Does it feel any different now than it did with your first book?

It’s weird and it’s actually gotten weirder over time. When you write your first novel, you write with no pressure for the most part. There are no deadlines involved, you’re just spooling out this masterpiece. Then you start writing on deadline and I will 100% turn in a first draft. As long as I know I followed my outline, I’ll be alright. It’s exciting and it’s fun getting to see an idea go from this thing in my head to something I’m holding in my hand. When I got the advanced copies for Fast Pitch it just didn’t compute at first. I hope that never goes away because if it loses its sparkle, what’s the point. This is something I never want to be boring or routine.

What other middle grade books do you recommend for those looking to diversify their summer reading lists?

Thanks A Lot Universe by Chad Luca—it’s beautifully diverse and queer and just wonderful. It’s about basketball and friendship, and boys figuring themselves out. It’s very deftly written. James Bird wrote a novel called The Brave that was my favorite middle grade book of 2020. It’s about a kid named Collin who is half Ojibwe, the tribe the author belongs to. There’s something powerful about more indigenous voices coming forward. I also enjoyed Amari and the Night Brothers by B. B. Alston, which I think everyone did because it’s been on the New York Times bestseller list for so long.

What’s next for you? Can you give us any hints about future releases?

The thing that I’m addressing next is mental health in the Black community, especially in young adults because you don’t see a lot of literature about it, which says a lot about how people perceive it…if they perceive it at all. Most of my mentees this year have really been struggling. These are individuals in their informative years cut off from everything and everyone. They spend most of their day in their bedrooms, sometimes on Zoom meetings, most of the time just alone. Seeing the effect on these kids reminded me of the importance of talking about the hard topics. This novel will take a very intimate deep dive into mental health amongst Black teenagers.

Nic Stone was born and raised in a suburb of Atlanta, GA, and the only thing she loves more than an adventure is a good story about one. After graduating from Spelman College, she worked extensively in teen mentoring and lived in Israel for a few years before returning to the US to write full-time. Growing up with a wide range of cultures, religions, and backgrounds, Stone strives to bring these diverse voices and stories to her work.

You can find her goofing off and/or fangirling over her adorable little family on most social media platforms.

Ashley Wells Ajinkya is an avid reader, book collector, writer, and graphic designer based in Minnesota. She also runs the bookstagram account @heytherereaders and serves as an Ambassador for The Pad Project. In her free time, Ashley can typically be found buying more books, finding vintage treasures at thrift stores, or planning her next trip.

Previous Post: « Q&A With Leah Scheier, The Last Words We Said
Next Post: Cover Reveal for The Leaping Laddoo by Harshita Jerath, Illustrated by Kamala M. Nair »
Save the date for the #WalterAwards23! You can now