Today we’re pleased to welcome Nita Tyndall to the WNDB blog to discuss their YA novel Who I Was With Her, out September 15, 2020! 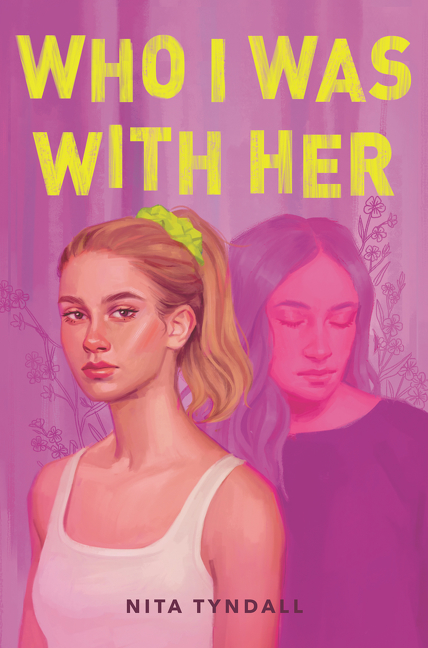 There are two things that Corinne Parker knows to be true: that she is in love with Maggie Bailey, the captain of the rival high school’s cross-country team and her secret girlfriend of a year, and that she isn’t ready for anyone to know she’s bisexual.

But then Maggie dies, and Corinne quickly learns that the only thing worse than losing Maggie is being left heartbroken over a relationship no one knows existed. And to make things even more complicated, the only person she can turn to is Elissa—Maggie’s ex, and the single person who understands how Corinne is feeling.

As Corinne struggles to make sense of her grief and what she truly wants out of life, she begins to have feelings for the last person she should fall for. But to move forward after losing Maggie, Corinne will have to learn to be honest with the people in her life…starting with herself.

Who I Was With Her is about the particular grief of losing your significant other as a teenager (which is already hard enough), but it’s complicated by the fact that Corinne was dating Maggie secretly, and that Maggie wasn’t out. Why did you want to explore the way our relationships are perceived and how that affects the grieving process?

For queer people there’s always, in the back of your mind, this fear about how your relationship is or will be perceived, no matter if you’re out or not—it’s a constant questioning of who you can tell, who’s safe, if it’s okay to be out where you are, and that feeling is especially heightened when you’re a teen. So many times, our relationships as queer people are secret and I wanted to explore how that secrecy would heighten grief, which is both an intensely private thing and now, in the age of social media, also something that is so almost bizarrely public and shared.

Are you normally a plotter or a pantser, and did you follow your usual writing process for Who I Was with Her?

I used to think I was a pantser but realized over the course of writing Who I Was with Her that I needed to plot, and my plotting is pretty similar for all of my books—I write the big points out as a bulleted list, any pieces of dialogue that have come into my head, and keep them in a separate folder in Scrivener, and just kind of go from there. Maybe someday I’ll do more detailed outlines, but I like keeping some surprises in to discover along the way.

WIWWH is your debut novel. Do you have any advice for other debut authors, especially authors of LGBTQ+ young adult novels or YA contemporary more generally?

Especially for LGBTQ+ authors, I would say, stick to your vision of the book, that it’s okay to push back or question elements that don’t feel true to the story you want to tell. There were times in early querying or submitting (and even the editing process!) that I got responses that wanted the book to be something it wasn’t or wanted certain elements spelled out for a straight audience that a queer audience would have already perceived. It’s absolutely okay in every stage to stay firm to how you envision the book to be—you don’t have to make the queer experiences in the book “palatable” for a straight audience if that’s not the story you’re telling.

For contemporary in general, it’s that not every story has to have huge, big stakes. Sometimes stories are quiet, and that’s how they’re told, and it’s perfectly fine.

This novel is told in alternating before and after timelines. How did you keep the timelines organized? Was it difficult to set a different tone and mood in each timeline (before and after Maggie’s death)?

Surprisingly, not really, that’s how the novel came to me organically—in pieces and flashbacks, so the tone shift wasn’t as big of an issue because that’s just how it came out. I did want to make sure the tones were consistent though, so during revisions I put all the flashbacks in a separate document and in chronological order and went through to make sure the story they told was complete.

Keeping them organized was difficult (shoutout to my copy editor who made sure they were all accurate!) but when I first started revising and organizing them Scrivener and Aeon Timeline were two extremely helpful pieces of software since with Scrivener I could make sure all the scenes lined up and Aeon Timeline let me actually put them on a calendar to figure out when they all took place.

I’m kind of a sucker for books about grief that have before and after timelines. Do you tend to navigate toward any other common plotlines in books about grieving and loss, and are there any you avoid?

I love a good moment in books about loss when the protagonist finds out about that loss for the first time and you as a reader experience their initial reaction with them, because people grieve in so many different ways. I also find it fascinating how other narratives incorporate funeral and burial rituals because those are so culturally specific and significant. I tend to avoid grief and loss narratives that make a martyr out of the person who died (especially if they died young) because none of us are like that when we’re alive.

Your protagonist, Corinne, loves to run. Are you also a runner or do you have something that you love and turn to the same way?

I am absolutely not a runner, but I do have things I turn to in the same way. I love to swim, and I love music—I took piano and voice lessons my entire childhood, and even if I don’t perform or do those things publicly like I used to it’s something that still brings me a lot of joy.

Absolutely. Courtney Summers comes to mind immediately, I love how unapologetic she is for being her entire self and that’s something I try to emulate. Always, always inspired by the queer and trans authors who came before me like Malinda Lo and Alex Gino. In terms of style, Nina LaCour, Laurie Halse Anderson, Stephanie Kuehn, and Tiffany D. Jackson—all of them have different styles but they’re the ones I automatically turn to for contemporary YA, because all of them are so compelling and poetic and raw, and their stories tend towards the “quieter” side of YA which is my favorite.

What other books do you think Who I Was With Her is in conversation with? And do you have any recommendations for other published or forthcoming kidlit (particularly YA)?

I think Who I Was with Her is definitely in conversation with other books about queerness and grief, especially for queer girls, so We Are Okay by Nina LaCour and The Meaning of Birds by Jaye Robin Brown. There’s a rich history of queer Southern fiction I always try to keep in mind too, like Georgia Peaches and Other Forbidden Fruit (also by Jaye Robin Brown) but also classic queer Southern authors like Dorothy Allison.

As far as recommendations go, there are so many good contemporary books with queer female romances at the center this year! Ones I’ve loved are The Henna Wars by Adiba Jaigirdar, You Should See Me In a Crown by Leah Johnson, and I Kissed Alice by Anna Birch. Others I’ve loved this year that weren’t necessarily queer books are I Killed Zoe Spanos by Kit Frick, which is based off Rebecca (my favorite novel), and Grown by Tiffany D. Jackson, which comes out September 15 and is absolutely gutting.

Surprisingly no one has asked me if there are any Easter eggs or references in Who I Was with Her yet so I’m going to go ahead and say there are, and that my favorite one is a reference to the movie It’s A Wonderful Life—Maggie’s last name is Bailey, which I absolutely took from the protagonist of that movie, George Bailey, because the theme of George not realizing the impact he had on his town and how different their lives would be without him is absolutely central to the novel and to Maggie herself since her death is the catalyst for Corinne’s world changing. 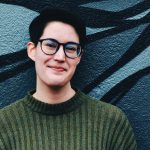 Nita Tyndall is a passionate queer advocate and literary translator who writes the kinds of books they needed in high school. They have previously written for outlets like Autostraddle, and were part of the Lambda Literary Writer’s Retreat in 2017. This is their first book. They live in North Carolina and can be found online at nitatyndall.com.

Previous Post: « Q&A With Tiffany D. Jackson, Grown
Next Post: Q&A With Mark Oshiro, Each of Us a Desert »
Applications are open for Literary Agents of Chang