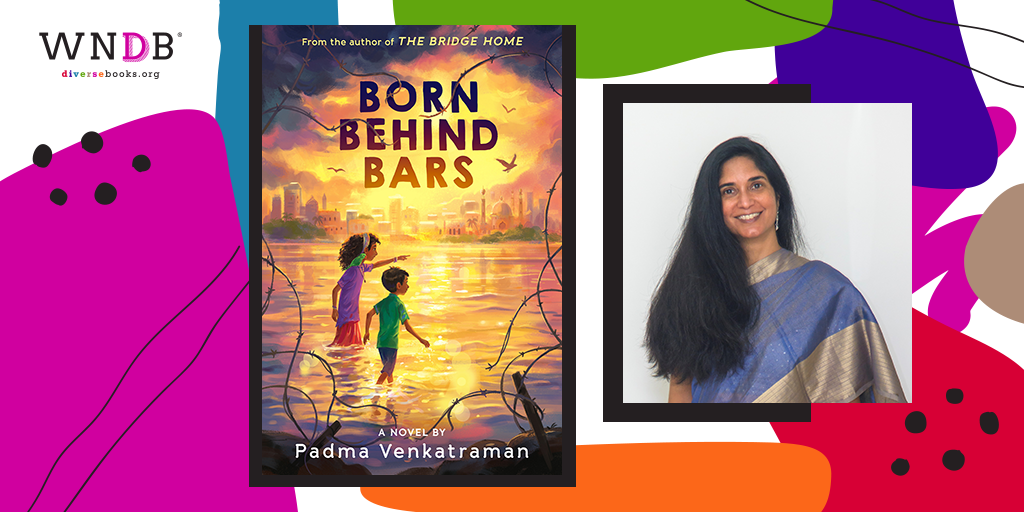 Today we’re pleased to welcome Padma Venkatraman to the WNDB blog to discuss Born Behind Bars. 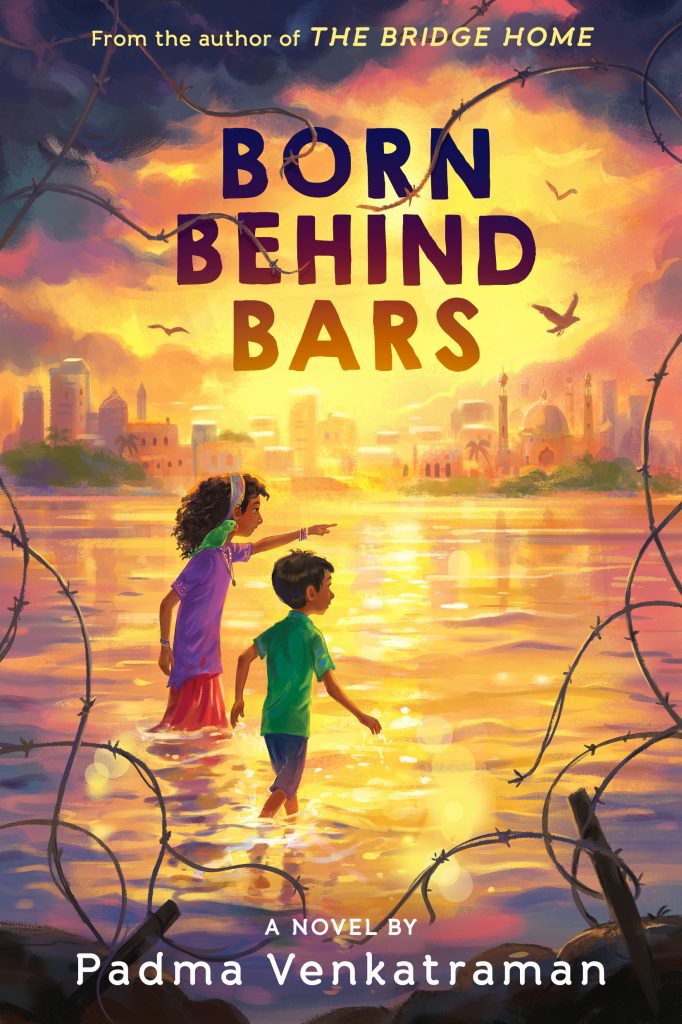 What did you most enjoy about writing this book?

I loved spending time with the characters. Kabir and Rani are such fun kids, and Grandma Knife is just such a cool human being, and so is Kabir’s mom and… I don’t want to list them all or I’d give away too much. Many of my characters are based on real people, and as I wrote, I felt as if I was spending time with those people again. Ultimately, at the final stage of writing, it was as though they had taken over my being, as if I temporarily was inside their minds and hearts—and that, for me, is one of the most exquisite (and at times also excruciating) aspects of my writing process. So, it’s not all fun, but the intensity of the process is part of what I value as a writer.

Did any of your real-life experiences from your time growing up in India make it into this book?

Other than the characters, the setting—both Chennai and Bengaluru—are cities where I lived when I was growing up. I love music, just as Kabir does, although my musical abilities aren’t spectacular. I also think that, as an immigrant who left India at age 19 on my own and was then forced to create my own family of friends and discover a new sense of home, I am drawn to stories in which a protagonist is displaced and searching to understand what family and home mean, while also fighting for survival. And, just as Kabir does, I didn’t have a lot of people who believed in me as a kid, but I had a few—and that went a long way.

What are your thoughts on children born in incarceration?

On the one hand, if we continue to incarcerate mothers, I do think it’s wrong to tear children away from them. On the other hand, if we decide a child should remain with the mother, behind bars, then we must do all we can to ensure these children get access to an excellent education and are able to experience life outside jail. But, as we know, even in the outside world, there are terrible inequities in terms of education and access to learning environments.

There are deeper questions, too. Should we incarcerate people at all? If yes, we need to reform and rethink and reexamine our attitude to “justice” and acknowledge, with scrupulous honesty, everything that we are doing wrong.

It is shocking to think that just one innocent person might be forced to live behind bars; yet we live with the fact that innocent juveniles are imprisoned. A CNN article cited National Exoneration statistics showing that while Black people represent 13 percent of the US population, they represent nearly half of those exonerated (because they were unjustly incarcerated). In India, people from marginalized communities are far more likely to be unjustly incarcerated. The fact that Born Behind Bars is based on a true story is horrid; what’s worse is that people like Kabir and his mom are still suffering in our world. Yet, many people refuse to acknowledge the systemic racism that underlies all this.

I hope readers of BBorn Behind Bars will ask questions that need urgent answers—and also engage in introspection about underlying and fundamental injustices in societies that can lead to crime and perpetuate poverty as well as miscarriages of justice and police brutality. I hope my books will empower readers to create a more compassionate and equitable society.

Both Born Behind Bars, as well as the previous The Bridge Home highlight, the goodness of the main characters despite their challenging circumstances. What are the factors that you believe make a difference?

I think love is so important—if even one person gives a child unconditional love, that is an incredible help. Also, as in Kabir’s case, in Born Behind Bars, having someone who believes in you as well as exposure to at least one role model who is a good and compassionate human being. Finally, given that my childhood was no picnic, a sense of humor always plays an important role in my books, because keeping alive my ability to laugh was vital to my own survival. 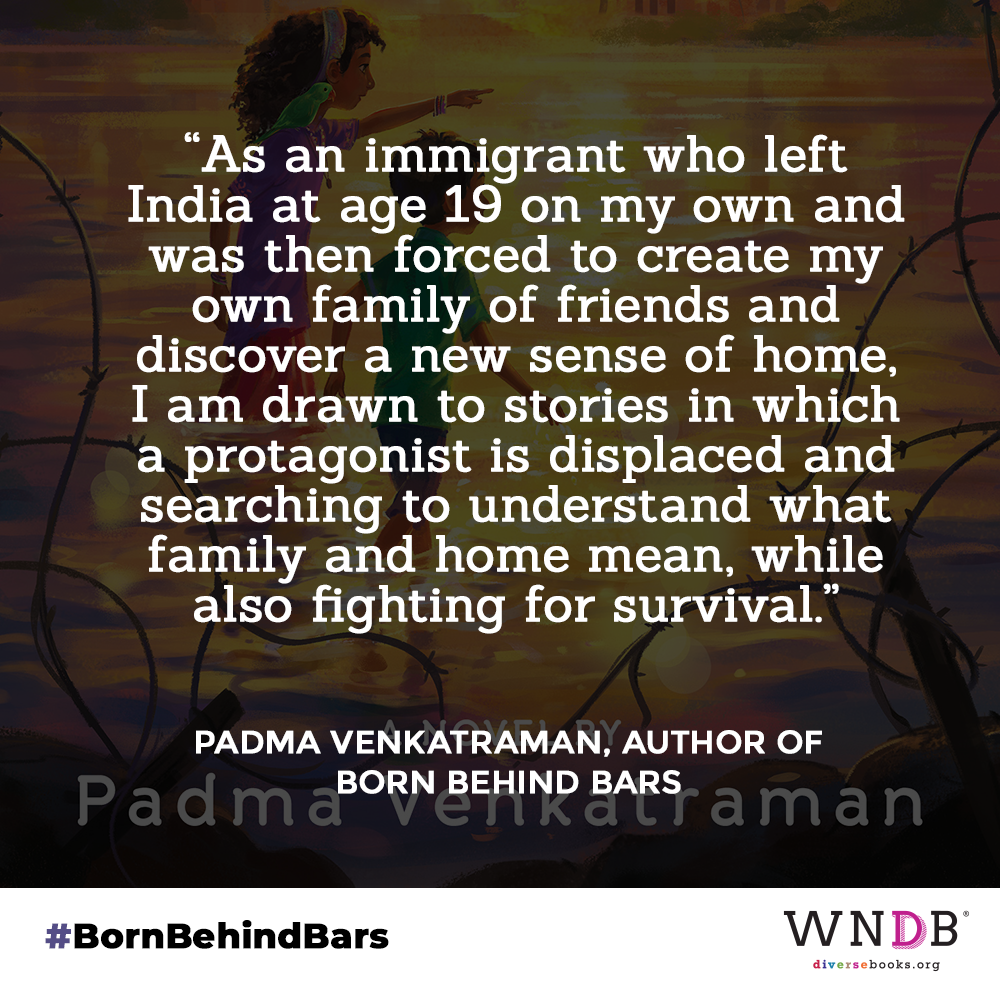 What are you currently working on?

I’m always working on multiple projects! Right now:  a novel in verse, a prequel to The Bridge Home, and a novel for older readers.

Tell us about a few published or forthcoming kidlit books that you’d recommend.

Here are some that come to mind this minute and that were (or will be) released this year: LEGACY by Nikki Grimes, FINDING JUNIE KIM by Ellen Oh, YOUR HEART, MY SKY by Margarita Engle, LUCK OF THE TITANIC by Stacey Lee, A BIRD WILL SOAR by Alison Green Myers. There are also a few 2021 releases on my To Be Read list I look forward to reading: BOY, EVERYWHERE by A. M. Dassu, BEA IS FOR BLENDED by Lindsey Stoddard, EVERYWHERE BLUE by Joanne Rossmaler Fritz, FLIGHT OF THE PENGUIN by Ann Braden. I’m not giving myself another minute to think, because if I did, I would surely want to mention a whole lot of other books and this list would be endless. 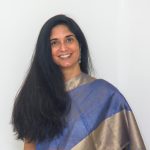 Dr. Padma Venkatraman (she/her) is an American author who immigrated on her own from India when she was 19 years old. She is the author of THE BRIDGE HOME which garnered 8 stars, was honored as one of the best books of 2019 by Kirkus, NYPL, Chicago Library and numerous others, and was a 2019 Global Read Aloud book. THE BRIDGE HOME is also an ALA Notable book, the winner of a Walter Award (from We Need Diverse Books), a Golden Kite Award from SCBWI, a South Asia Book Award, a Nerdy Book Award and a Crystal Kite Award. Padma’s previous novels are A TIME TO DANCE, ISLAND’S END and CLIMBING THE STAIRS, all of which have won acclaim, awards and numerous honors. Padma has spoken at Harvard and other universities; provided commencement speeches at schools; participated on panels at venues such as the PEN World Voices Festival; and been the keynote speaker at national and international conferences and literary festivals. Her next novel, BORN BEHIND BARS, will be released on September 7, 2021 from Nancy Paulsen Books, Penguin Random House. Before becoming a full-time author, Padma led diversity efforts at the University of Rhode Island’s graduate school, taught and directed a small school in England and conducted oceanographic research (sometimes serving as chief scientist on vessels on which she was the only BIPOC / female). Visit Padma at www.padmavenkatraman.com or follow her on Twitter @padmatv or Instagram @venkatraman.padma. 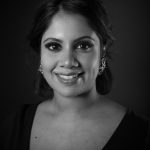 Previous Post: « My Two Border Towns Is About the Duality of Life on the Border
Next Post: How Picture Books Can Normalize Anxiety and Make Kids Feel Understood »
Congratulations to the 2023 #ALAYMA winners and ho