Today we’re pleased to welcome Racquel Marie to the WNDB blog to discuss Ophelia After All, out today, February 8, 2022!

Ophelia Rojas knows what she likes: her best friends, Cuban food, rose-gardening, and boys – way too many boys. Her friends and parents make fun of her endless stream of crushes, but Ophelia is a romantic at heart. She couldn’t change, even if she wanted to.

So when she finds herself thinking more about cute, quiet Talia Sanchez than the loss of a perfect prom with her ex-boyfriend, seeds of doubt take root in Ophelia’s firm image of herself. Add to that the impending end of high school and the fracturing of her once-solid friend group, and things are spiraling a little out of control. But the course of love—and sexuality—never did run smooth. As her secrets begin to unravel, Ophelia must make a choice between clinging to the fantasy version of herself she’s always imagined or upending everyone’s expectations to rediscover who she really is, after all. 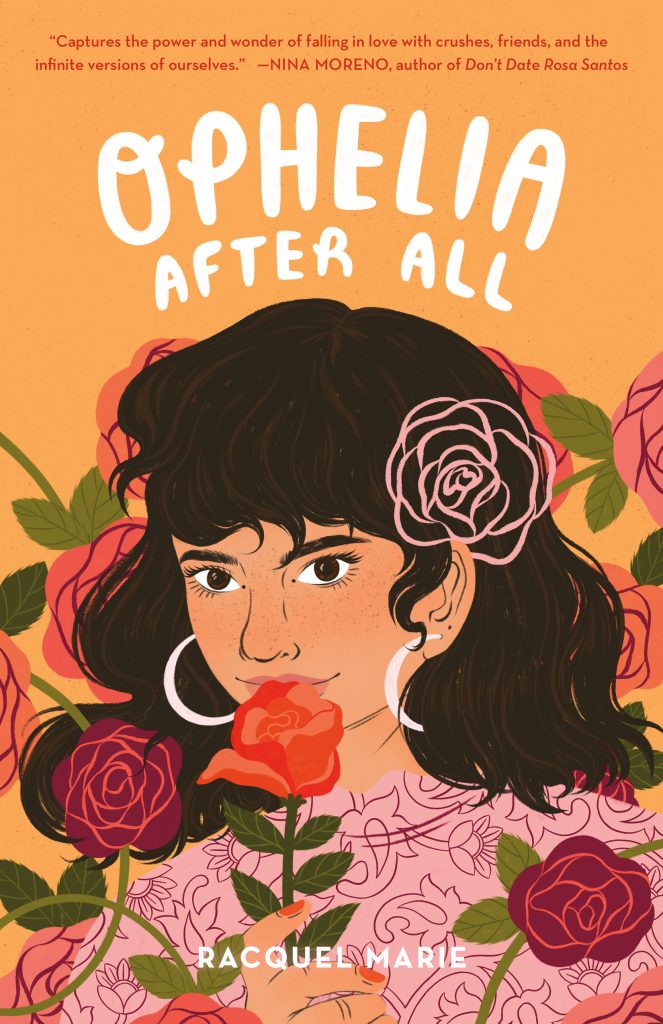 Ophelia and her friends are in their senior year and preoccupied with their futures, but are also consumed by their school’s upcoming prom. Is there any reason why you chose prom to be such a crucial part of the story?

Because Ophelia is such a romantic, I loved the idea of the story being built around an extremely romanticized event like prom. Traditionally, prom is a formal celebration for high schoolers before they graduate and “become real adults” that is wrapped up in a lot of heteronormative expectations: guys ask girls, girls wear dresses, boys wear suits, there is a Prom King and Prom Queen, virginities are lost, etc. etc. Having Ophelia and her friends’ lives temporarily shaped around prom while they navigate questions of sexuality and romance felt fitting, especially since so much of what they navigate is in opposition to many of those traditional expectations.

What was it like diving into the mind of a high schooler thinking about her future and questioning her sexuality? Did you conduct any research to craft this perspective?

Ophelia’s experience of questioning her sexuality as a teenager was actually heavily shaped by my own queer journey! At the start of my senior year, I wrote down on a slip of paper that I wasn’t straight, then I tucked it away and told myself I’d forget about it. (Spoiler: I did not.) I started writing Ophelia After All a couple years later, right after I turned nineteen, because I wanted to explore all the feelings I’d been suppressing around my sexuality. Though our experiences definitely differ in places, writing through her perspective helped me with my processing and growth, bringing me to a present where I am very comfortable and proud of my queerness. So her voice came pretty naturally to me, both because of our closeness in age and because of our shared questioning journeys.

Ophelia’s hobby of gardening (specifically roses) is very unique. What is the significance behind her passion for horticulture?

I named Ophelia after the character Ophelia from Shakespeare’s Hamlet—who is heavily associated with floral imagery—but early drafts of Ophelia After All didn’t depict Ophelia as a gardener at all. I got the idea for her hobby and love of flowers randomly during a lecture in college as a way of building on her character and interests, with the additional fun of it being an intentional play on her namesake. As the story developed, I loved getting to use her garden as a vehicle to show her current emotional state, with the tender, heavily romanticized roses representing her heart and relationships that she can either nurture, or let wilt away.

What is the significance of Ophelia’s name being derived from Shakespeare’s Hamlet?

Originally, my Ophelia was named after Ophelia from Hamlet because I was studying the play in college while first drafting this book. I was going through a difficult time in my life when an anxiety-inducing—but ultimately very fun—experience arose where I had to portray Ophelia during her infamous “mad scene” in front of my whole class. That one presentation had a big impact on me realizing I was capable of doing, and even enjoying, things that terrified me, and at that moment there was nothing more terrifying than exploring the queerness I’d buried away for so long. It felt fitting then to name my character facing the same fears as me after the Shakespearean character who helped me face some of my own.

In the context of the book, Ophelia’s namesake also plays into her struggle with romance, as both my and Shakespeare’s Ophelia feel trapped in unreciprocated love and suffocated by everyone’s expectations. 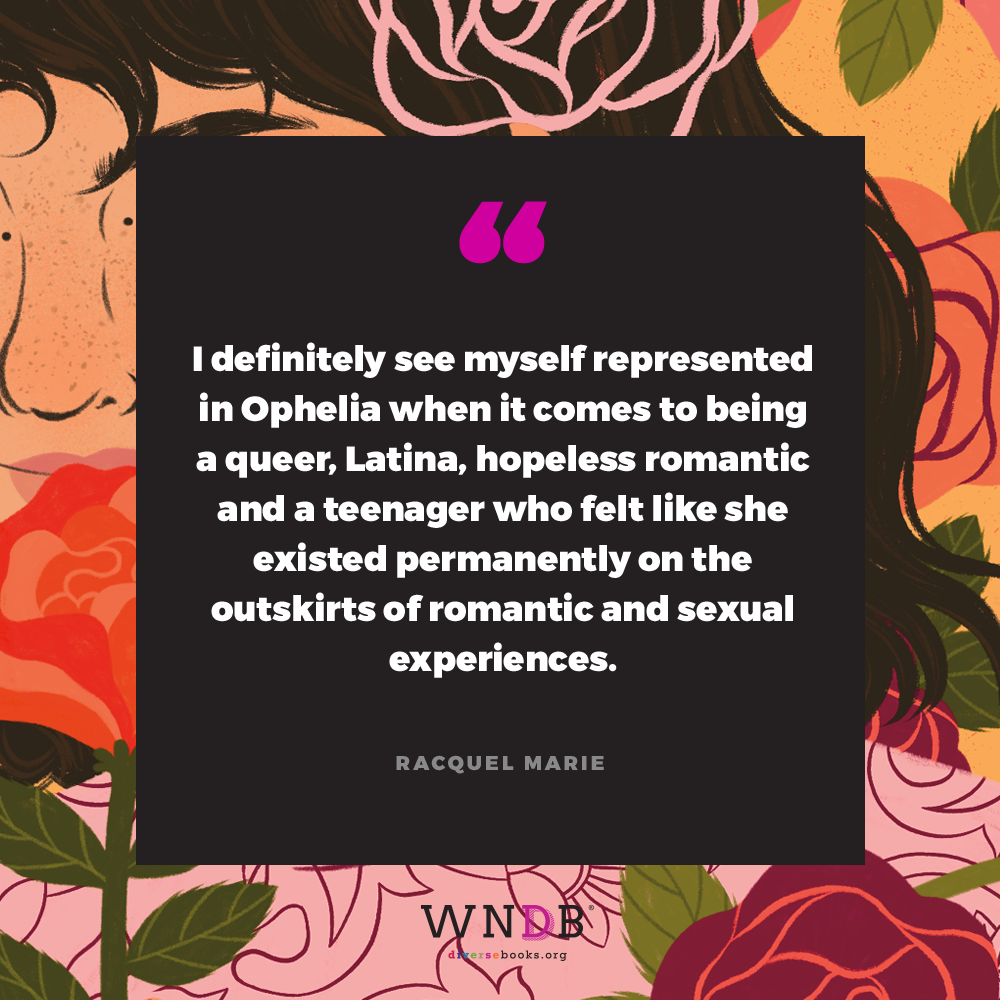 Ophelia’s friend group comes from varied backgrounds in terms of ethnicity, sexuality, and personal interests. How did you craft their characters and why do you think it is important to see this representation?

When I picture a group of friends, I picture it being comprised of people from an assortment of various backgrounds, so the diversity in Ophelia’s friend group came organically when I was initially drafting. However, it was vital to me that I worked with sensitivity readers and talked closely with friends who shared aspects of certain characters’ identities throughout the process of working on this book to be sure I wouldn’t do harm. I feel strongly about representing diverse casts of characters in my books because it’s a reflection of how I see the world, but that should never come at the expense of poor representation. I’ve really enjoyed getting to see early readers already connecting with and feeling seen by these characters I love so much, and I hope to continue writing books that allow that.

How do you see yourself represented in Ophelia? Do you have any hobbies as distinct as Ophelia and her friends’?

I definitely see myself represented in Ophelia when it comes to being a queer, Latina, hopeless romantic and a teenager who felt like she existed permanently on the outskirts of romantic and sexual experiences. Part of the fun of writing this book was getting to play around with the subjects of relationships and love, while still affirming the notion that there is no set timeline on when and how you have to experience those things. It’s something I definitely needed to hear at Ophelia’s age and I’m glad I can represent my younger self this way.

Are there any projects you’re currently working on? If so, could you tell us more about them?

I’m actually revising a lot of projects at the moment! Our Shadows Have Claws is a YA horror anthology with all Latine authors, edited by Amparo Ortiz and Yamile Saied Méndez, that comes out in the fall of 2022 and features my short story about the Colombian succubus myth, La Patasola. I’m also revising my sophomore book, You Don’t Have a Shot, which is set for 2023 and follows rival soccer captains who are forced to team up to salvage both of their athletic futures. Sapphic rivals to lovers!!! And lastly, also in 2023, Study Break is an anthology written by all gen Z authors with interconnected stories taking place at one fictional college! So I’ve been very, very busy this year, but I’m already working on what could hopefully become my 2024 book!

Do you have any recommendations for those readers who loved Ophelia and her friends?

Yes! Some YA contemporaries/romances I absolutely love and think fans of Ophelia After All would too are: How To Excavate A Heart by Jake Maia Arlow (Jewish sapphics falling in love around Christmastime), Our Way Back To Always by Nina Moreno (Latine childhood best friends reuniting to complete their senior year bucket list), Fifteen Hundred Miles from the Sun by Jonny Garza Villa (gay Tejano accidentally comes out, then falls in love with a boy he meets on Twitter), The Field Guide to the North American Teenager by Ben Philippe (coming of age about a Black French Canadian teen who reluctantly relocates to Texas) and Counting Down With You by Tashie Bhuiyan (fake dating between an anxious bookworm and her school’s resident bad boy). 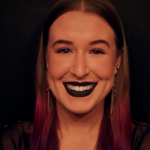 Racquel Marie grew up in Southern California where her passion for storytelling of all kinds was encouraged by her friends and big family. She received a BA in English with an emphasis in creative writing and a minor in gender and sexuality studies from the University of California, Irvine. Racquel primarily writes YA contemporaries starring queer Latine characters like herself. When not writing or reading, she loves practicing beauty and special effects makeup, watching and producing YouTube videos, and teaching herself to play ukulele in spite of her extremely long nails. You can learn more about her writing and love of books through her Twitter, @blondewithab00k. Ophelia After All is her debut.