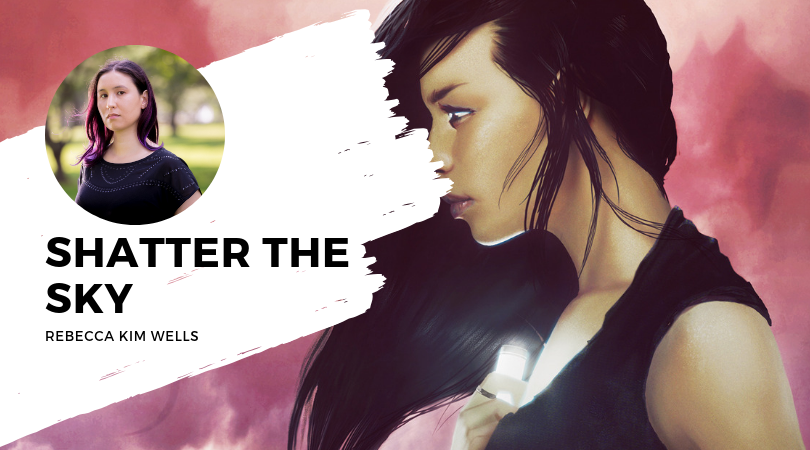 Today we’re delighted to welcome Rebecca Kim Wells to the WNDB blog to discuss her upcoming debut SHATTER THE SKY, out July 30, 2019.

A determined young woman sets out to rescue her kidnapped girlfriend by stealing a dragon from the corrupt emperor in this stunning fantasy debut that’s perfect for fans of Margaret Rogerson, Rae Carson, and Rachel Hartman.

Raised among the ruins of a conquered mountain nation, Maren dreams only of sharing a quiet life with her girlfriend Kaia—until the day Kaia is abducted by the Aurati, prophetic agents of the emperor, and forced to join their ranks. Desperate to save her, Maren hatches a plan to steal one of the emperor’s coveted dragons and storm the Aurati stronghold.

If Maren is to have any hope of succeeding, she must become an apprentice to the Aromatory—the emperor’s mysterious dragon trainer. But Maren is unprepared for the dangerous secrets she uncovers: rumors of a lost prince, a brewing rebellion, and a prophecy that threatens to shatter the empire itself. Not to mention the strange dreams she’s been having about a beast deep underground…

With time running out, can Maren survive long enough to rescue Kaia from impending death? Or could it be that Maren is destined for something greater than she could have ever imagined?

Congratulations on your debut, and thanks so much for talking to us about Shatter the Sky. Maren is very much a “reluctant hero,” at least at the beginning of the book. Was this intentional on your part?

Yes! The reluctant hero is one of my favorite tropes—I never get tired of books that play with this idea in interesting ways. I’m also a little obsessed with subverting the idea of the chosen one, so I had to mash those together in my own book! Something I really like about Maren is that even though she’s a homebody (a trait I borrowed from myself) and very hesitant to do anything to mess with the equilibrium of her life, she is determined to do what she feels is right.

Shatter the Sky has been marketed as the “angry bisexual dragon” book. How do you feel about this tagline?

I love it! I kind of have to, considering that I came up with it! But my publisher and readers have really embraced the tagline, and I’m very excited that we’re in an age where a lot of people feel comfortable with being loud about unabashedly queer books.

Tell us more about what it’s like to be a debut author, especially as someone who works in bookselling and is familiar with how publishing and bookstores operate. Were there any unexpected challenges or exciting surprises?

It’s really great to be a bookseller and an author. Publishing is such an opaque industry that any sort of insider knowledge is enormously helpful in calming debut jitters. Beyond that, being a bookseller has really helped me develop relationships with other booksellers and understand how to approach bookstores. I expected some of this—people outside of the industry often don’t know how collaborative and communal independent bookselling can be, even between stores and regions. But I was still so surprised and touched by the ways in which bookselling colleagues, regular customers, and even sales reps from other publishers have been so enthusiastic about my book. In fact, one of our sales reps placed the very first preorder for Shatter the Sky. It’s been a very emotional experience.

When you were writing, was there a particular reader you were hoping to reach?

Aside from just trying to tell the story that wanted to be written, I very much was writing for the me who didn’t see positive bisexual representation on television until Jane the Virgin and Brooklyn 99. How many things would I have figured out if I had seen and read this kind of thing earlier in life? I have no idea. Paste Magazine revealed the cover and first chapter of Shatter the Sky several months ago online, and one of the first responses on Twitter was from a person who said they were crying because two girls kissed on the page, in the first chapter. Oh man. I cried too.

What would your characters be reading right now if they were real?

I have a feeling that Maren would be really into Wild Beauty (Anna-Marie McLemore). Kaia would get a kick out of Once & Future (Amy-Rose Capetta & Cori McCarthy). Sev…probably The Count of Monte Cristo (Alexandre Dumas) or something with a similar revenge bent.

Do you have any advice for unpublished fantasy writers?

Read widely, both in and out of your genre. Two of the foundational world-building details for Shatter the Sky were inspired by adult nonfiction reading. But also, don’t be afraid to stop reading if you feel like it’s necessary to zero in on your own voice. I don’t often read young adult fantasy while I’m drafting my own—I find that I sometimes start echoing other books without meaning to! And the biggest piece of advice that even I need to take more seriously: eyes on your own paper. Spending time dwelling on other people’s news has only ever distracted me from what I should be doing.

Who are some authors you find inspirational?

Malinda Lo, the legend—I’m inspired by the example she sets as a writer of queer children’s literature and the breadth of her work. Anna-Marie McLemore is one of the best people I’ve met and she writes such beautiful books. Courtney Summers is both incredibly kind and a complete badass. Read all of their books!

Do you have any book recommendations (they can be fantasy or another genre entirely)?

How many times can I say Anna-Marie McLemore in one interview? Read all of her books, but especially Wild Beauty or Blanca & Roja. I adored All Out: The No Longer Secret Stories of Queer Teens Through History, edited by Saundra Mitchell. For secondary world fantasy, Of Fire and Stars, by Audrey Coulthurst, or the deliciously evil Forest of a Thousand Lanterns by Julie C. Dao. For something completely different, Little & Lion by Brandy Colbert. (More people should be reading Brandy Colbert!) And I couldn’t end without mentioning the gorgeous fairy tale Ash, by Malinda Lo. 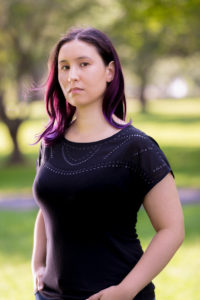 Rebecca Kim Wells is the author of Shatter the Sky (an Indies Introduce Pick, an Indies Next Pick, and a finalist for the New England Book Award), and its sequel Storm the Earth, forthcoming in 2020. She holds a BA in Political Science from UC Berkeley and an MFA in Writing for Children and Young Adults from Simmons College. When not writing, reading, or talking about writing or reading, she sells books at a fiercely independent bookstore in Massachusetts. She can also be found drinking tea, singing along to musicals, or playing soccer. (Usually not all at once.) If she were a hobbit, she would undoubtedly be a Took.

Previous Post: « Joseph Bruchac’s Native American-Authored Recs + THE HERO NEXT DOOR
Next Post: Sneak Peek of AN ABC OF EQUALITY by Chana Ginelle Ewing »
We're thrilled to reveal the cover for TOKYO NIGHT