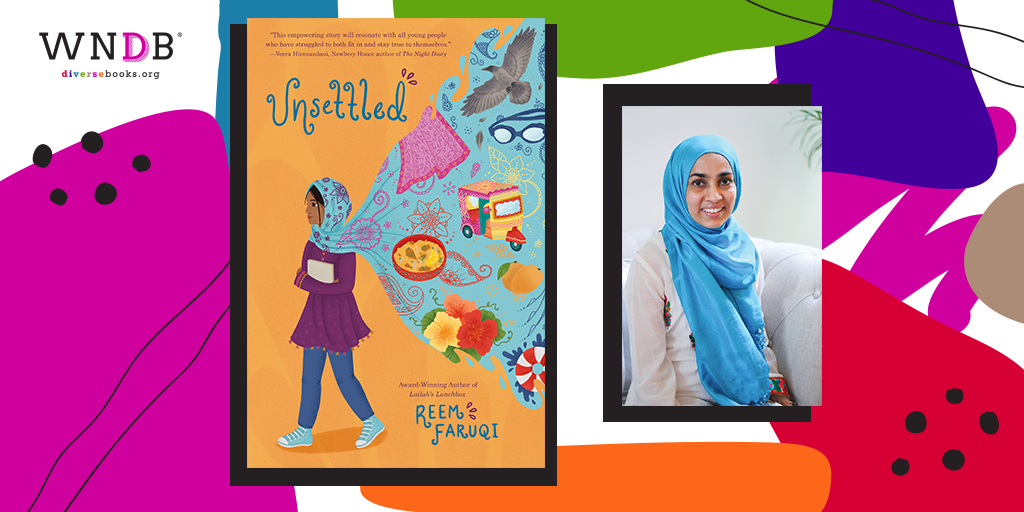 Today we’re pleased to welcome Reem Faruqi to the WNDB blog to discuss her MG novel Unsettled, out May 11, 2021!

When her family moves from Pakistan to Peachtree City, all Nurah wants is to blend in, yet she stands out for all the wrong reasons. Nurah’s accent, floral-print kurtas, and tea-colored skin make her feel excluded, until she meets Stahr at swimming tryouts.

And in the water Nurah doesn’t want to blend in. She wants to win medals like her star athlete brother, Owais—who is going through struggles of his own in the U.S. Yet when sibling rivalry gets in the way, she makes a split-second decision of betrayal that changes their fates.

Ultimately Nurah slowly gains confidence in the form of strong swimming arms, and also gains the courage to stand up to bullies, fight for what she believes in, and find her place. 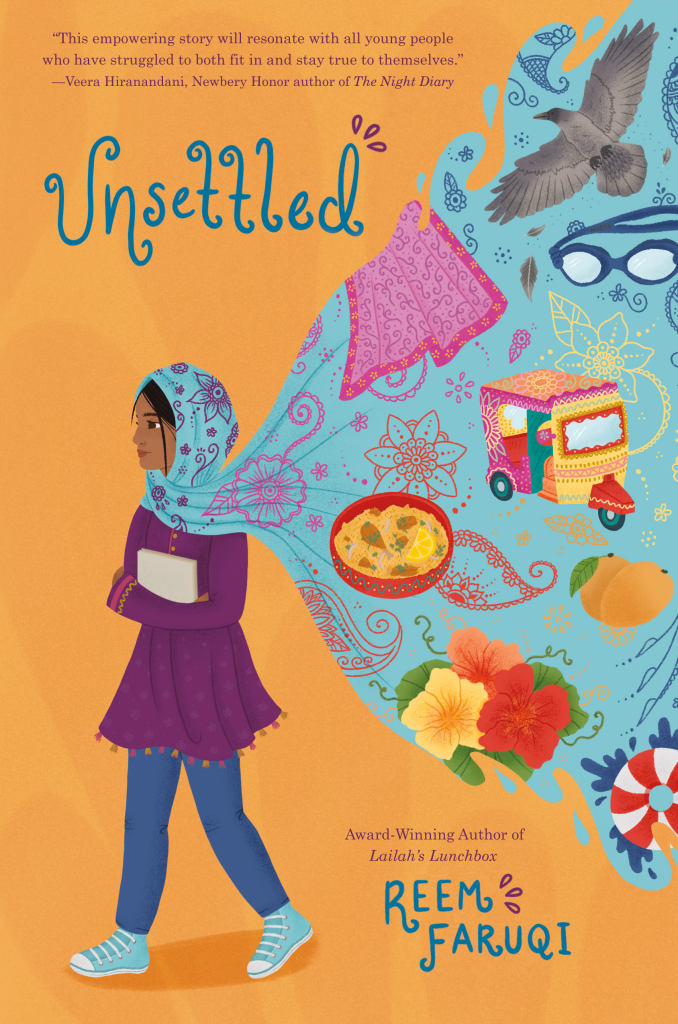 Unsettled is about Nurah’s specific experience moving from Karachi, Pakistan to Peachtree City, Georgia, but it’s also about the universal experience of moving when you’re young and figuring out your place in the world. Why did you want to explore this?

Since this experience was similar to mine, it felt natural to write what I knew. I also feel that this age was one full of emotion so I wanted to share a glimpse of Nurah’s life. I also wished I had the voice Nurah had when I was thirteen years old. Writing this story felt cathartic.

You’ve said in other interviews that you swam laps to get into Nurah’s headspace. How did swimming help you connect with who Nurah is?

Yes, I’ve been working on my swimming technique and I recently relearned to do a flip turn in the water so that was exciting for me. When I’m in the water, I feel a sense of calm. Similarly, in the water, Nurah finds peace and to her, it’s a safe, blue cocoon.

Similarly, when I swim, I love that it’s just the water and me. I am not browsing through a phone or checking email, but just enjoying the peace the water offers. I love going underwater and floating in a quiet blue world.

Initially, my story was in prose, and my first agent Ilse Craane said that it read like a novel in verse, and was that what I was thinking? I wasn’t. I didn’t even know that was an option for me. I didn’t click that I could write a novel in verse. I eagerly rediscovered novels in verse and loved how they covered so much with so few words.

I was a picture book author first so I got used to trying to tell a story in fewer words. Writing a middle-grade novel felt intimidating for me, so a novel in verse felt much more doable to me.

I took the clunky prose and chopped it up into verse and I loved how the words breathed and the story shone more.

Also when you reluctantly move continents, you feel a little broken at first (or for a while!), sort of like how Nurah felt when she first moved. So to me, the broken nature of the lines in the novel of verse reflects Nurah’s experience. To me, novels in verse are bits of broken lines that come together beautifully. 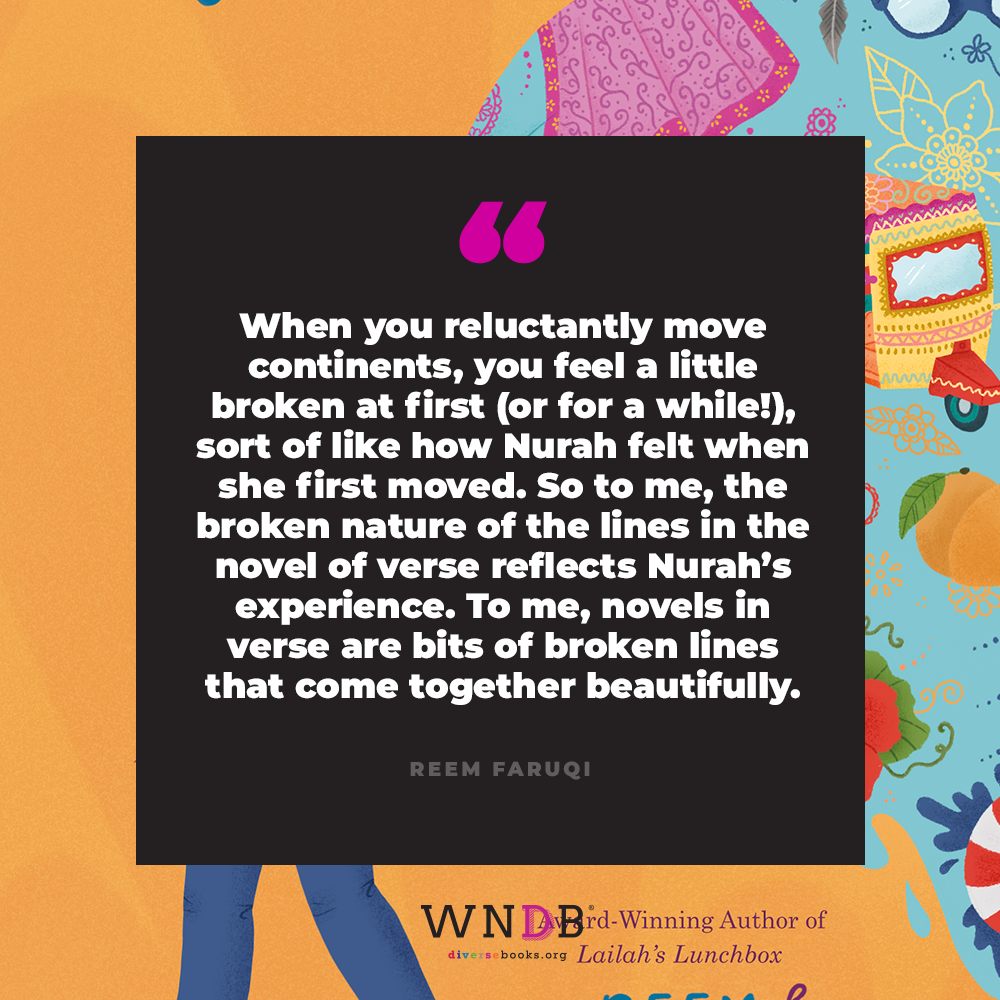 This book touches on Islamophobia and how it impacts Muslim communities in both small ways and big ones, but it’s also about community and standing up against injustice. What do you hope young readers take away from this?

To use their voice for good no matter what.

Through challenging situations, Nurah learns to use her voice the hard way, but I hope readers can learn to use their voice for good the easy way too.

If you could design your dream panel for Unsettled, what would it be about? What other authors would you like to have on it with you?

If the characters from Unsettled show up on your doorstep, who do you think you’d get along with really well? Who do you think would grate on your nerves?

Nurah feels most like me, but I’d love to see the grandparents and chat with them—Dadi, Nana, and Nana Abu.

Cal and Jay would grate on my nerves.

What other books do you see Unsettled as being in conversation with?

Other Words for Home

Inside Out and Back Again

Do you have any recommendations for forthcoming or published kidlit?

PB: a recent release: In My Mosque, I enjoyed for the lyrical words and gorgeous art!

MG: Amina’s Song by Hena Khan—her voice was beautiful and I love the sense of family in Hena Khan’s books.

YA: Clap When You Land by Elizabeth Acevedo, a novel in verse with two alternating points of view between two sisters. The audiobook is also fabulous.

There are so many more, please check out my Twitter feed @ReemFaruqi for book recommendations.

On my blog in my About Me section, I talk about how I like to eat apples upside down creating a flower-shaped pattern. One fourth grade class asked how I did that and it was fun to demonstrate on Zoom!

A question that I’ve never been asked before: Who taught you how to dive? My character Nurah talks about diving into the water. My grandfather Nana Abu taught me how to dive. While he swam laps, I would sit at the edge of the pool and he would show me how to enter the water arms and head first. There’s no feeling better than diving into a pool!

Reem Faruqi is the ALA Notable author of Lailah’s Lunchbox, Amira’s Picture Day, I Can Help, and Unsettled, which is loosely based on Reem’s own story. Of Pakistani descent, Reem immigrated to Peachtree City, Georgia, in the United States from the United Arab Emirates when she was thirteen years old. Reem is also a teacher and photographer who loves to doodle. She lives in Atlanta with her husband and three daughters. Like Nurah, Reem loves the Pakistani beach, crows, her aquamarine silk hijab, and especially her grandmother, Nana. Visit her online at www.reemfaruqi.com.

Previous Post: « Jasmine Warga’s The Shape of Thunder Is About Difficult, Beautiful Things
Next Post: Rain Is Not Wet: An Adventure in Internalized Ableism »
LAST CALL for WNDB 2023 Internship Grant Partners!