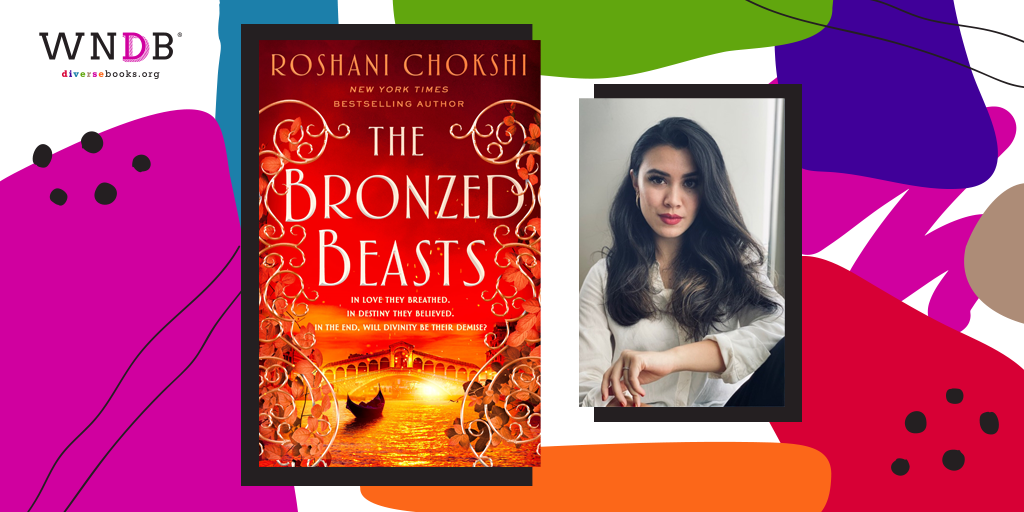 Today we’re thrilled to welcome Roshani Chokshi to the WNDB blog to discuss The Bronzed Beasts, the final book in her stunning YA series, The Gilded Wolves Trilogy. 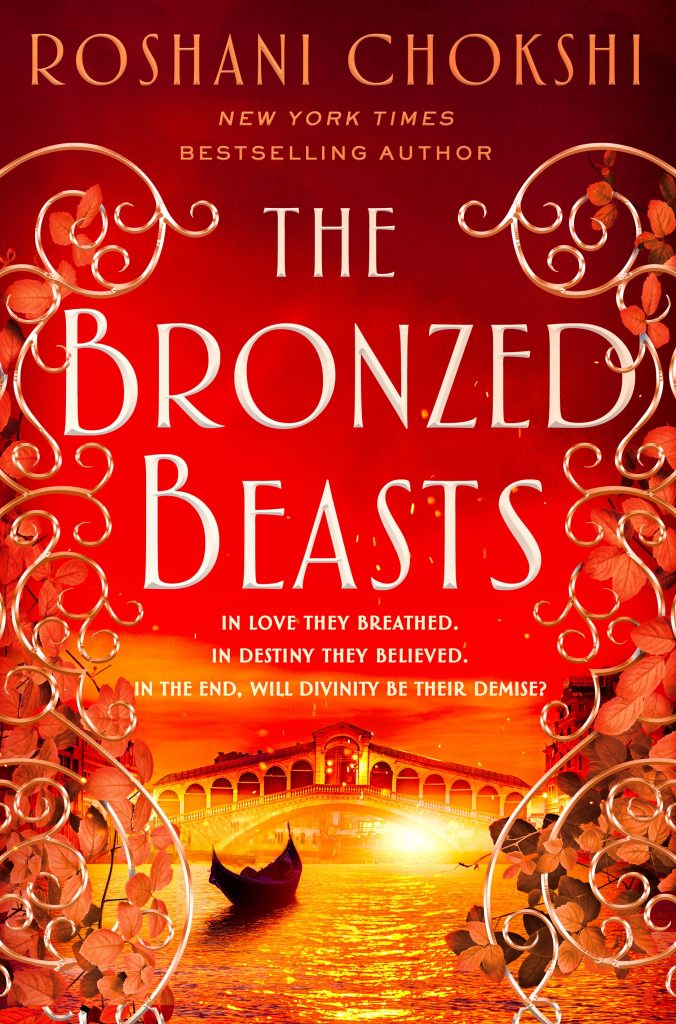 Congratulations on the conclusion of this amazing trilogy! The final book of the Pandava Series, Aru Shah and the Nectar of Immortality, is coming out next spring. What was it like to balance writing and publishing two major and very different series at the same time? How are you feeling now that they are both coming to an end?

Thank you so much! I am in that somewhat dazed state of shock still. I’ve been in the world of Aru Shah and The Gilded Wolves for half a decade. Balancing those two series was physically challenging — my hands are a bit of a wreck these days — but they were so wildly different in tone and texture that leaping between the two was as refreshing as it was chaotic. I think writing them simultaneously also fed both series, making them bigger — and hopefully — better than first imagined.

There was a lot of guessing on what the title of the third book would be. How did you settle on The Bronzed Beasts?

Actually one of me and my husband’s good friends ended up titling it for us! I was going to go with…bronzed bears…or something equally awful. I was mid-lament when he (thank you, Eric!) came up with the title.

Each of the books takes place in a different location, and we follow the crew from Paris to Russia and now Venice. How and why did you decide on Venice as the setting for The Bronzed Beasts?

Venice was one of our honeymoon stops! Venice was where I learned about the existence of plague islands, the origin of the word “quarantine” as the forty days in which a ship was not allowed to dock for fear of the vessel harboring plague. It captured my heart and imagination so much that I knew it had to be the setting for The Bronzed Beasts.

On a related note, I was listening to your B&N podcast episode, and you were talking about researching ice making. Did you really decide to have The Silvered Serpents take place in an ice palace because you removed the part about Séverin putting a bottle in a bucket of ice in The Gilded Wolves?? Were there any research rabbit holes you went down while writing The Bronzed Beasts?

A little, yes! Ha! I was so annoyed at having removed something so insignificant that I had spent a not insignificant amount of time researching, and this ended up being the launching pad for the ice palace. That, and, the fact that the most memorable James Bond scene for me is the fancy ice hotel and a debonair, smirking Pierce Brosnan. Rabbit holes for The Bronzed Beasts are too plentiful, but I did a lot of reading on plague islands and how Venice handled their dead back in the old days.

What was your favorite part of writing The Bronzed Beasts? What was the most challenging part?

The end. I cried so much writing those final chapters, but it was also my favorite section because this was the end I had been building towards for the past five years.

Throughout the series, the crew must decipher puzzles and solve riddles, usually through math, science, history, mythology, and wordplay. What was the process of writing these puzzles like?

You know that meme of Charlie Day looking wild-eyed before a whiteboard full of string? It me. In a past life, I am confident I was a goblin. I love riddles and word puzzles, banter and trickery. They are a joy for me to come up with, but the challenge is figuring out how other people would solve it. I struggle sometimes with spatial description because my brain, for whatever reason, doesn’t naturally size up a room like that. But in an action-y series like The Gilded Wolves, that’s no good! So my challenge is the balance between cleverness and clarity. 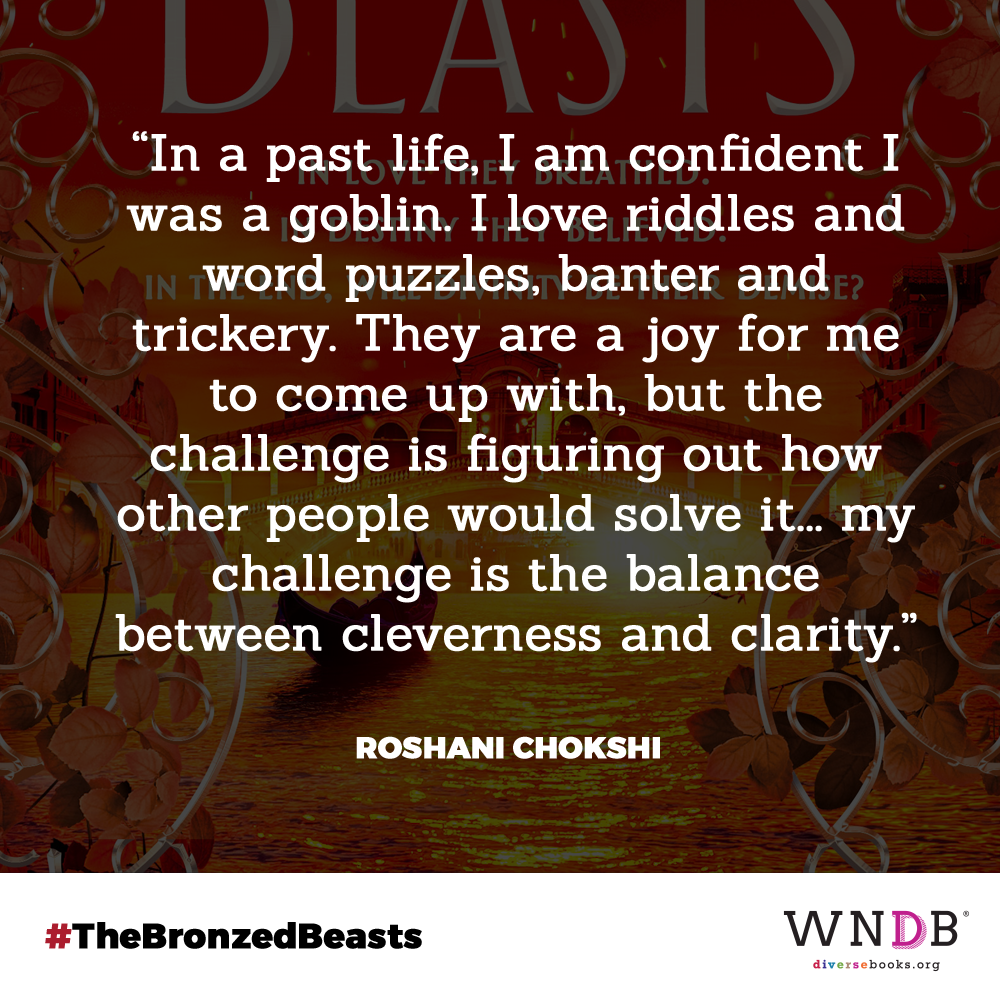 The friendship, banter, and teamwork of the crew is such a delight to read and one of my favorite parts of this series. After the tense and uncertain ending of The Silvered Serpents, it seems like the crew, particularly Laila and Enrique, are furious with Séverin. How did you navigate the emotional dynamic of the crew in The Bronzed Beasts?

Ah. That ending broke my heart. I knew the emotional dynamic would be fragile, but I think what made it propulsive to write was the fact that so much has happened between these characters that they have nothing left but their honesty. There is nothing holding them back from the truth and once they started speaking, their dialogue guided me where to go and how they might heal.

A major theme of this series is the idea of history, who gets to tell it, and what gets omitted from the record, and you seamlessly weave together threads of different mythologies and histories with fantasy elements to create a world that is rooted in very real problems but still wondrously magical. How did you decide which pieces of mythologies and histories to include while maintaining the fantasy aspect of the story?

Thank you! There was a lot that didn’t make it on the page, particularly with the characters’ countries of origin. For example, Laila came from a part of India (Pondicherry) which was colonized by the French while many other parts of India were under the iron-grip of the British Raj. There is MUCH that can be said, but did it serve the specific story I was trying to tell? At the time of its writing, no. Constantly asking myself “why does this need to happen?” helped me widen and narrow the historical/mythological lens I was looking through.

You’ve said that you always knew not just how the series would end, but even what the last sentence would be. How did the process of getting to the ending you envisioned change or evolve as you wrote each book? Were there any unexpected detours or surprises (pleasant or otherwise)?

There were two surprises. None that I can reveal right now, but the evolution of the ending was rewarding. Despite knowing the final line, I didn’t know what else happened around that finale and one of my favorite scenes came up entirely without warning as I was in the final days of deadline. It’s a conversation about old pain and the nature of history repeating. I won’t say more than that, but it hurt to write.

The Silvered Serpents left many readers wanting to punch Séverin at the end. Will this sentiment continue in The Bronzed Beasts?

Only you can decide whether you still want to punch Séverin by the end of The Bronzed Beasts, but I can assure you he is doing his utmost to be un-punchable.

Can you share anything about any projects you are currently working on? (Many of your readers, myself included, are like kids eagerly waiting for Christmas to come. Are there sleigh bells in the air?)

Funny you mention sleigh bells…I am working on a story that’s a bit of a palate cleanser for me. It is outlined…it has a prologue…I hope I can finish it and that it emerges the way I imagined!!

Roshani Chokshi is the author of commercial and critically acclaimed books for middle grade and young adult readers that draw on world mythology and folklore. Her work has been nominated for the Locus and Nebula awards, and has frequently appeared on Best of The Year lists from Barnes and Noble, Forbes, Buzzfeed and more. Her New York Times bestselling series include The Star-Touched Queen duology, The Gilded Wolves, and Aru Shah and The End of Time, which has been optioned for film by Paramount Pictures.