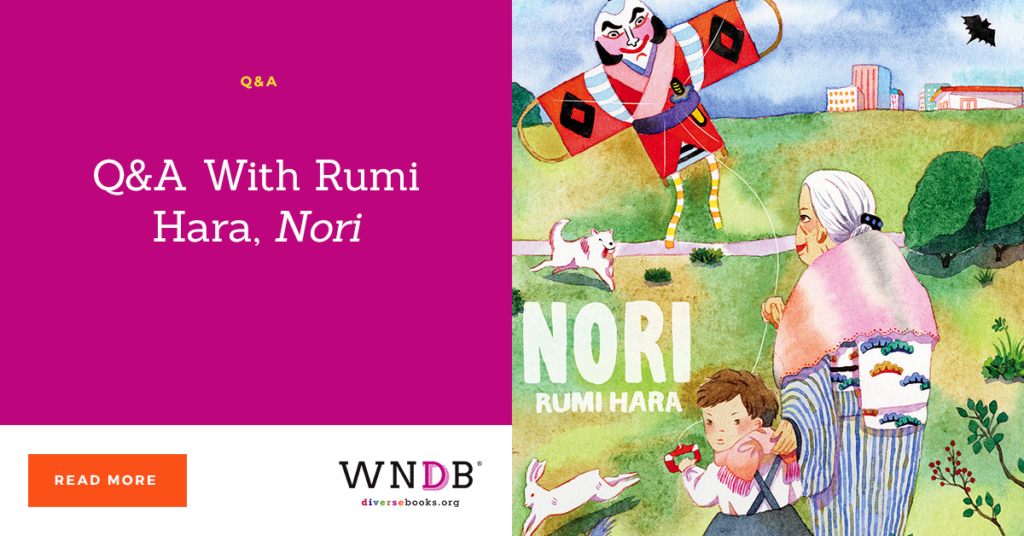 Today we’re pleased to welcome Rumi Hara to the WNDB blog to discuss their graphic novel Nori, out May 12, 2020!

Ignatz nominated and MoCCA Arts Festival Award-winning cartoonist Rumi Hara invites you to visit her magical world. Nori (short for Noriko) is a spirited three-year-old girl who lives with her parents and grandmother in the suburbs of Osaka during the 1980s. While both parents work full-time, her grandmother is Nori’s caregiver and companion—forever following after Nori as the three-year-old dashes off on fantastical adventures.

One day Nori runs off to be met by an army of bats—the symbol of happiness. Soon after, she is at school chasing a missing rabbit while performing as a moon in the school play, touching on the myth of the Moon Rabbit. A ditch by the side of the road opens a world of kids, crawfish, and beetles, not to mention the golden frog and albino salamander. That night, her grandma takes to the Bon Odori festival to dance with her ancestors. When Nori wins a trip to Hawaii, she finds herself swimming with a sea turtle, though she doesn’t know how to swim.

In mesmerizing short stories of black and white artwork with alternating spot color, Hara draws on East Asian folklore and Japanese culture to create an enchanting milieu that Nori tries to make sense of, wrestling between the reality of what she sees and the legends her grandma shares with her. 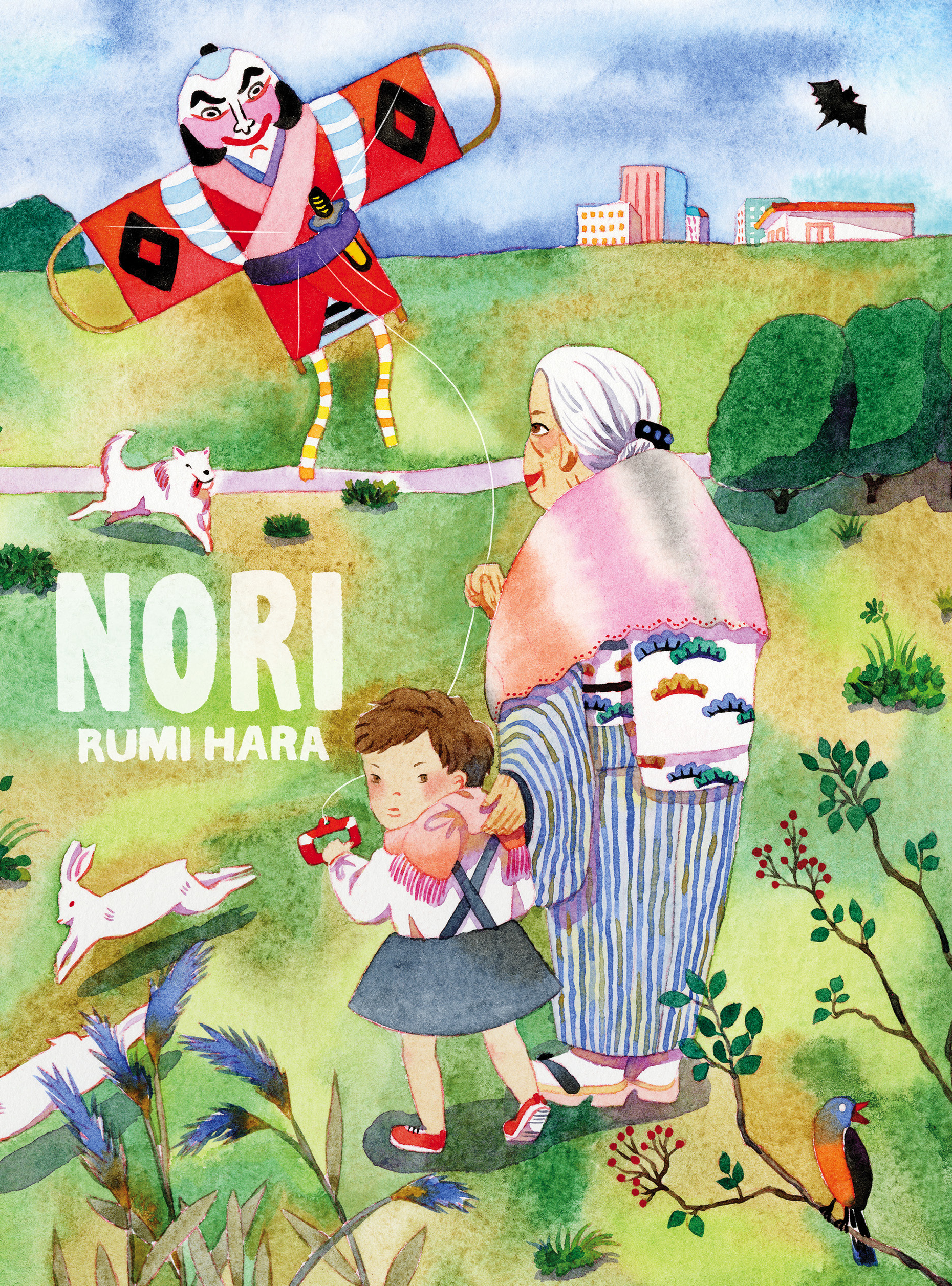 The magic in this story highlights the imaginative spirit of being a child. Did you draw from Japanese culture, folklore, and mythology in creating Nori’s magical adventures? Were there any that you wrote because it was something you dreamed about happening to you as a child, the way some kids might hope to find Totoro in the forest or Narnia in a wardrobe?

Japanese and East Asian folklore is definitely a big inspiration for this book. Like any Asian kid, I grew up with the stories of moon rabbits and Chinese zodiac so it felt natural to make them part of the lives of Nori and Grandma. Historic animals like the dogs left behind by the Antarctic expeditioners also made it into the book. Some of my own memories, too, like the golden frog that Nori sees in the ditch. I saw one when I was little in a stinky river that the neighborhood kids played in. I never found out where it came from, but Nori got an answer.

Nori is drawn primarily in black-and-white with spots of color. Why did you make that artistic choice for this story?

I like stories that have a little creepiness to them, like old folk stories that are simple but mysterious. The texture that I can get from drawing with ink and brush on handmade paper helps create that uncanny feeling, I think. The spots of color were for riso printing because Nori was originally intended to be printed as a minicomic. I thought the setup would also work well with screen printing.

In Japan, at least when I was growing up in the 80s and the 90s, it was very uncommon for a woman, especially a married woman with kids to work outside of home. My mom was the only woman in more than a hundred new full-time employees that were hired the year she started working at her first job. Childcare options were non-existent and so my two grandmothers stepped in. That’s still a real problem in Japan and the environment for working women needs to improve.

I did have a great childhood with my grandmothers though, and I’d like to believe they enjoyed hanging out with me too. I loved hearing stories about the war and scary but fascinating folktales. I realized that younger people today might not have a chance to interact with someone who experienced the war firsthand and hear those stories. So I thought it would be interesting to tell some of the stories in the form of fiction. Also, everyone loves their grandparents, but most people don’t get to spend enough time with them. I thought it would be nice if there was a book about a grandparent-grandchild pair going on adventures.

In this story, the world of adults mostly lingers in the background, offering a sense of time and place as the world heals from WWII. How did you weave these pieces into the story without allowing them to take over what is primarily Nori’s adventure and understanding of the world? What do you think is special about seeing the world (or a particular setting and time in the world) from the eyes of a three-year-old?

I wanted Nori’s world to be magical and imaginative but also grounded in a particular time and place, something real and ordinary. Magical things happening in an everyday setting are most fascinating. The particularity of the place, with its history and memory, is important. I think I learned that from reading lots of noh plays in college. Nori’s stories take place in Osaka in the 1980s, in the city of Hirakata to be exact. In the 1980s Japan, the economy was booming like never before, but it was right before the big crash. It was sort of a surreal time. Hirakata is also a weird city. The small town located between downtown Osaka and Kyoto is home to one of the oldest amusement parks in the country. The cityscape is ordinary except for a Ferris wheel that’s visible from anywhere you are. The town is also close to Yodo River, a principal river in Osaka, so it has many small streams like the one Nori and her friends play in. You can be walking down a regular street and all of a sudden be crossing a small mossy bridge over a stream. Unexpected topography and landmarks can invite anyone into the world of dreams, but a carefree three-year-old can turn imagination into adventures and safely come back from them.

Are there any writers or artists who have been an inspiration for your work?

Meeting cartoonist Michael Cho at a book festival in Brooklyn was a big event for me. He explained to me how he inks two layers on one sheet of paper on a lightbox and I copied that technique for making Nori. I also often look at the works of Mineo Maya, Rumiko Takahashi, and Osamu Tezuka among other manga artists when I’m sketching.

I love Panther by Brecht Evans. It’s about a little girl who misses her cat. It’s cute, exhilarating, beautiful, and frightening all at the same time. The Akissi series by Marguerite Abouet and Mathieu Sapin is also great. Akissi is a little mischievous girl growing up in Ivory Coast. I wish Nori can meet Akissi and become friends with her.

What is one question that you wish you were asked more often (and the answer)?

A: Iwasaki, which means “a rocky cape.” You can find lots of seaweed there!

Rumi Hara was born in Kyoto, Japan, and started printing her comics on a tiny home printer while working as a translator in Tokyo in 2010. After receiving an MFA in illustration from Savannah College of Art and Design, Rumi moved to New York in 2014, where she now lives and works as an illustrator and comics artist. Her comics series Nori was first self-published as minicomics and was nominated for an Ignatz Award in 2018.